In a Crisis and Beyond: Platforms Make Scalable Government Innovation, Modernization a Reality
Skip to Content
What you need to know about the defense industry - in your inbox.
Business
Air Force Chief Explains Why He’s Retiring the A-10s

Air Force Chief of Staff Gen. Mark Welsh, a former A-10 pilot, says after much debate, sequestration forced him to only one conclusion: Cut the A-10 fleet. By Stephanie Gaskell

When Air Force Chief of Staff Gen. Mark Welsh and his staff crunched the numbers to find the best way to cut their budget under congressionally mandated sequestration, they looked at the Air Force’s five main missions and worked their way from there.

The former A-10 pilot explained what went into his controversial decision to cut the beloved fleet of close air support fighter jets. “The decision has come under fire from several sectors, but there’s a logical reason we got to that point.”

There’s the mission of air and space superiority, but Welsh determined the Air Force couldn’t cut an entire fleet of F-15s until the F-35 was ready without incurring extra costs. The intelligence, surveillance and reconnaissance mission was practically off limits. “If you ask the combatant commanders, the number one shortfall year after year is ISR,” Welsh said, at the National Press Club in Washington, D.C., on Wednesday. “They would not support us cutting any more than we already have projected.”

Airlift mobility could be a good place to achieve savings, Welsh said, since the services are getting smaller. He brought up the idea with his Army counterpart, Gen. Ray Odierno, who shot it down, arguing that being smaller also means being more flexible and agile.

Next came the command and control mission, but as Welsh said, “The only service that can do command and control on a theater scale is the Air Force.” And that left them with strike platforms. Nuclear capabilities were off the table because the Air Force doesn’t control that budget. As for cutting nuclear bombers, Welsh explained: “We need about 80 to 100 nuclear bombers to do deterrence and do any predictable expected campaign kind of flying with a bomber fleet in a large conflict, which I hope we never have to do. But if we have one, you better have about 80 to 100 bombers or you can’t do them both. That’s about how many we have today. They’re aging but we got the right number. We can’t go smaller.” 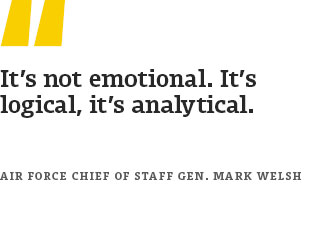 So that left him with the choice to cut A-10s, B-1s, F-15Es or F-16s. “And we came very clearly to the conclusion that of all those horrible options the least operationally impactful was to divest the A-10 fleet,” Welsh said. “That’s how we got there. It’s not emotional. It’s logical, it’s analytical. It makes imminent sense from a military perspective – if you have to make these kinds of cuts. Nobody likes it. Not me, nobody.”

Cutting the fleet of A-10s will save the Air Force about $4.2 billion, he said. “You just don’t make big savings unless you cut fleets,” he said. Still, it was a tough decision. “This is not about the A-10 not being a great airplane and doing great work.” But it came down to one simple fact.

“Think about the threat 10 years from now. The A-10 will not be part of that threat,” he said. “We’re no longer operating in a single environment.”

NEXT STORY: Actually, the Army Will 'Involuntarily Separate' Officers