A portrait of George Washington crossing the Delaware

Today’s endless, undeclared and increasingly secret use of U.S. force is exactly what the founding fathers feared most. By Gregory D. Foster

Seven out of ten Americans think the signers of the Declaration of Independence would be disappointed today by the way the United States has turned out, according to a recent Gallup poll. That figure has increased steadily and markedly over the past ten years. If the respondents are correct, why does it matter?

Because, first, America’s founders fathered “a new nation,” President Abraham Lincoln reminded us at Gettysburg. They were the grand architects and engineers of the values, ideals, institutions and character that define the idealized United States we claim to be – a “city upon a hill” to aspire to, to emulate, to actualize.

The founders were bona fide statesmen, accomplished at and dedicated to the high politics of statesmanship, not the self-absorbed, self-indulgent, self-aggrandizing low politics of today. Their métier was, in Aristotelian terms, the practice and propagation of civic virtue. If we could choose, whose counsel concerning the affairs of state would be of greater value: that of Washington, Adams, Jefferson, Madison, Franklin, Hamilton, Jay and their colleagues; or that of Obama, Bush (pere and fils), Clinton (homme and femme), Cheney, Rumsfeld, Gore, McCain and their like?

The founders were America’s philosophes, men of deep intellect who, by design, sought to marry the world of ideas they appropriated and themselves generated with the world of politics and governance they practiced. What a stark contrast this is to the intellectual aridity of today’s ideologically driven ruling class.

Jefferson referred to his cohorts at the Constitutional Convention as “an assembly of demigods.” In absolute terms, the founders weren’t demigods. Remember slavery, women’s rights, and the treatment of Native Americans? In relative terms, though, compared to what we have today, they stood and continue to stand as giants to pygmies.

Finally, well before the notion of strategy had yet gained intellectual traction (thanks to Clausewitz and others), the founders were inherently strategic in their vision of and approach to statecraft, fully attuned to the legacy they were establishing and leaving. Today, there are only strategically challenged political tacticians running the affairs of state.

So if America’s founders would be disappointed in the United States today, how much of that disappointment, if any, might be directed at the military and what has come to be known as national security affairs? It is a question especially worthy of our attention, since the American people have repeatedly said in polls that, of society’s major institutions, the military is the one they most trust.

Let us start with the Preamble to the Constitution. Whatever the framers’ intent, however aspirational the wording, and notwithstanding the fact that national security wasn’t part of the vernacular of the day, the Preamble stands as America’s enduring security credo.

Its importance is essentially threefold. It lists providing for the common defense (in lower-case letters) as merely one — not the first, not the most important — of the national aims the governing apparatus called for by the Constitution seeks to achieve. Semantically, it captures the normative essence of military affairs as self-defense (not aggression, not power projection). And it thereby implicitly cautions against purchasing defense at the expense of these other strategic priorities — national unity, justice, domestic tranquility, the general welfare, liberty.

The founders had a clear conception of war. It was what occurred whenever military force was employed against another party. It was called what it was — not something euphemistic like “police action,” “stability operation,” “counterinsurgency,” or “humanitarian intervention” — and it was clearly distinguishable from peace, the normal and preferable state of affairs. It had a beginning (to be formally declared by both houses of Congress, the people’s representatives),  a middle (to be executed by the president as commander in chief of the armed forces and funded by Congress with the people’s money) and an end (the determination of which was left unclear). It was undertaken only as a matter of necessity — a last resort, not a matter of choice. Madison famously provided one of the most powerful statements ever on war:

Of all the enemies to public liberty war is, perhaps, the most to be dreaded, because it comprises and develops the germ of every other. War is the parent of armies; from these proceed debts and taxes; and armies, and debts, and taxes are the known instruments for bringing the many under the domination of the few. In war, too, the discretionary power of the Executive is extended; its influence in dealing out offices, honors, and emoluments is multiplied; and all the means of seducing the minds, are added to those of subduing the force, of the people. The same malignant aspect in republicanism may be traced in the inequality of fortunes, and the opportunities of fraud, growing out of a state of war, and in the degeneracy of manners and of morals engendered by both. No nation could preserve its freedom in the midst of continual warfare.

Today, we live in a state of constant, potentially endless war — always, without exception, undeclared; invariably by choice (rhetorically disguised as necessity); frequently in secret (to increase the license to act, while minimizing oversight and accountability); often labeled war (to engender fear and urgency), but just as often labeled something other than war (for reasons of expediency, convenience and legal circumvention); initiated and prosecuted by a now permanently imperial presidency, largely devoid of congressional consultation and consent before the fact, sometimes even with minimal congressional notification after the fact.

Such concentration of executive power, such abrogation of legislative authority and responsibility, such marginalization of popular consent would seem to be the ingredients of tyrannical government the founders said the people had the right and the duty to overthrow.

The founders also, we well know, had a pronounced fear of and antipathy toward standing armies — large, permanent, professional military establishments — because of the dual temptations for domestic oppression and international adventurism by those in power, the drain on public resources, and, not least, the not-infrequent aberrant behavior of those in uniform.

This fear led them to invest Congress with specific power to determine the size and composition of the armed services, make rules to govern those forces, mobilize and oversee the federal use of the militia, control the size and distribution of the military’s budget, and, most importantly, declare war.

These enumerated congressional powers and the designation of the president as commander in chief of the armed forces were designed to ensure civilian control of the military — ultimate direction, oversight, and decision-making authority over the military in the hands of properly elected and appointed civilian officials — a concept that has become a cardinal precept and precondition for democracies everywhere. And it was this fear of standing armies that led the founders to prefer the citizen-soldier to the professional. “When we assumed the Soldier,” said Washington, “we did not lay aside the Citizen.” And from Jefferson: “Every citizen should be a soldier. This was the case with the Greeks and Romans, and must be that of every free state.” They were not anti-military; far from it. Rather, they were anti-militaristic and anti-interventionist, preferring active, regular commercial and diplomatic engagement, not military involvement, with the rest of the world.

Today, we have much of what the founders would have feared most: a totally professional force, largely unrepresentative of American society, increasingly alienated from the public it is supposed to serve, huge in size, gluttonously expensive, more heavily and lethally armed than any other force in the world, deployed all across the globe all of the time, a source of recurring provocation and adventurism, principally prepared for a preferred American way of war that is no longer relevant, continuously guilty over time of socially and politically irresponsible behaviors (from combat atrocities to internal sexual assault), and singularly at the forefront of both global and domestic militarization (not least by virtue of America’s place as the world’s leading arms dealer).

Notwithstanding the expanded use (and abuse) of the Reserves to further enlarge its capabilities and expand its involvements, it is a force not of citizen-soldiers but of self-described “warfighters” and “warriors” whose job it is to prepare for and wage war. Civilian control of the military has given way to civilian subjugation to the military, a condition born in important measure of the growing lack of military experience of public officials, their enduring strategic illiteracy and their fear of being labeled weak on defense. Add to this the dramatically expanded use of special operations forces and covert operations, which threaten civilian control, undermine accountability and blur proper lines of demarcation between military, security, law enforcement and intelligence activities.

There is, no doubt, much about the military and national security today the founders would have been hard-pressed to anticipate: weapons of mass destruction, cyberwarfare, drones and other autonomous technologies, targeted killing (presumably overseen directly by the commander in chief) and massive electronic surveillance.

But there is much they did anticipate, which explains why the founders might be demonstrably disappointed in the United States today. Many tools of governance they gave us bear a very direct relationship to military and security matters and reflect expectations that have increasingly gone unmet: a well-defined process for lawmaking that reflects the signal importance of the rule of law; the use of and adherence to treaties as binding international compacts that require agreement by both the legislative and executive branches without being undermined or circumvented by such evasive devices as presidential signing statements.; judicial review, which gives the final say to, and demands the involvement of, the judiciary on matters of constitutional import (from war powers to surveillance to due process for enemy combatants); and, of course, habeas corpus, due process and freedom from unlawful search and seizure.

Some of today’s national security issues would be familiar to some degree to the founders that no doubt would give them pause now. They were all too familiar with and practiced in the use of secrecy; but would they countenance the suffocating, overweening centrality of secrecy in national security affairs today? They well understood and lived with both the necessary strengths and irritating ills of an independent free press; but would they countenance the divulgence of state secrets by media and whistleblowers (or, conversely, government persecution of such sources)? They were used to and took advantage of mercenaries and privateers; but would they countenance the immense size and inordinate political influence of defense contractors (or their performance of inherently governmental functions)?

America’s founders were sons of the Enlightenment. Their entire approach to government and politics was based on a foundation of reason. Reason today is in lamentably short supply among public officials presuming to be, if we are to bow to the logic that implicitly underlies representative democracy, the best of us who govern the rest of us. Accordingly, especially for those among us who are sworn “to support and defend the Constitution,” there is more than passing value in reminding ourselves of the enduring importance of these founding ideas. 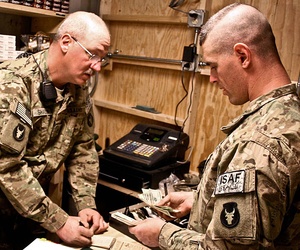 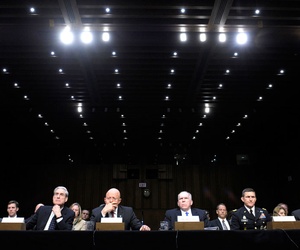 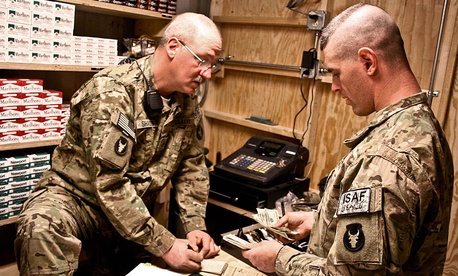 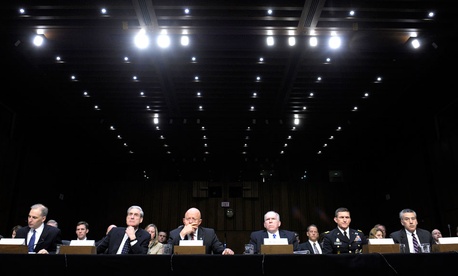