Perspecta's View: Six Steps for DES to Capture Innovation
Skip to Content
Get all our news and commentary in your inbox at 6 a.m. ET.
Ideas
Is It Time to Reassess Our Long-Term Alliances in the Middle East?

Should conversations between Washington and Tehran be focused on nuclear weapons when there are other economic and geopolitical factors in play? By Fariborz Ghadar 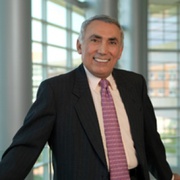 As negotiations between Washington and Tehran proceed, should the conversation really remain confined to nuclear discussions? Or is it time for the United States to take advantage of this newly reopened communication line and reassess her Middle Eastern allies?

If we look to history for guidance, it’s evident that our strongest Middle Eastern alliances have been with Israel, Iran under the Shah, and Turkey. But after the Iranian Revolution the new regime became an adversary. Fearing a change to the regime instigated by the U.S., Iran began to strengthen its nuclear capabilities, sparking suspicions it was building nuclear weaponry. The country also began to support our adversaries, most notably Hezbollah in Lebanon, Syria and alternative factions in Iraq. Thus, since 1979, the United States has largely perceived Iran as the troublemaker of the Middle East.

Though the United States did ask for Iranian support in dealing with the Taliban’s influence in the western region of Afghanistan(to which Iran complied), soon after, former President George W. Bush labeled Iran as part of an “axis of evil.” And considering Iran continues to back our main opponents in the region, it’s obvious that both nations distrust one another.

But, with the recent election of Iranian President Hassan Rouhani by over 50 percent of the vote, it’s clear the populace is seeking change -- one in favor of the United States. In fact, aside from the Jewish Israeli population, the Iranian populace is the most pro-American public in the Middle East. After the Revolution, close to a million people from Iran immigrated to the United States. Millions of their relatives who would have loved to immigrate remain in Iran and are sympathetic towards the U.S. and appreciative that their relatives live a comfortable and accepting life here.

Moreover, it appears that even Iran’s Supreme Leader Ayatollah Khamenei is now open to conversing with the U.S. For a more explicit example, consider that when posters opposing negotiations with the United States appeared in the city, security authorities removed them in less than 24 hours. And though Khamenei said Tehran should not trust Washington, he has issued his support of Rouhani’s actions and has asked hard liners to back off and give negotiations a chance.

Thus, with Iran’s new president established and an open dialogue in tow, should the United States consider the option of reassessing her Middle Eastern allies and explore the option of restoring her historical allegiances?

The demographics of many of the Arab countries — with their growing numbers of youth and the political ramifications like that of the Arab spring — are such that they might be more difficult long-term partners than Iran. With birth rates hovering below two children per woman, Iran will resolve its demographic time bomb and is able to more easily handle its large young population. The partnerships we currently have with Egypt and with Saudi Arabia do not offer the same longer term stable populace support. Additionally, Iran represents a potentially attractive economy, with a population of about 75 million, well educated, supportive of democracy and the United States, and keen to be involved in the global market.

America is not the only one who might wish to reevaluate her partnerships if trust can be restored. Perhaps it is time for Israel and Prime Minister Benjamin Netanyahu to consider reassessing the potential future benefits of having Iran on its side. Is Iran, with its historically large Jewish population and tolerance of its Jewish population, not the more logical ally?

Iraq, Syria and Lebanon, with Hezbollah, all look to Iran for economic support. Bringing Iran into the fold can help resolve many of these headaches. The sanctions that have effectively crippled Iran’s economy have given America enormous leverage. As evident by Iran’s recent election, its population wants to change this adversarial situation.

These factors, coupled with the relatively more democratic nature of Iran’s government, present an opportunity for America and Israel to reconsider who they want by their side in the long run. Though Iran’s idea of democracy may be different than the U.S. definition, it is one of the more democratic nations in the region. Just consider that Iran’s foreign policy reassessment is based on an election -- an election that was accompanied by a very high electoral participation. Furthermore, the result of this election is a demand to engage with the U.S. and join the global economy. This accordingly begs the question that perhaps it is time to take a page from history and to reassess our long term allies in the region. There are of course concerns and risks associated with any reassessment of our strategy.  Most critical is whether the regime can be trusted? However we need to be cognizant of the alternatives’ risks. There are also risks with continued sanctions, further isolation, war or nuclear proliferation. Engagement carries risks, but by the same token offers opportunities to influence the developments both outside and inside Iran.

Fariborz Ghadar is a senior adviser at the Center for Strategic & International Studies and a professor at Penn State. He held a vice ministerial post in the Shah of Iran’s government.

NEXT STORY: Help Veterans by Taking Them Off the Pedestal