In a Crisis and Beyond: Platforms Make Scalable Government Innovation, Modernization a Reality
Skip to Content
Get all our news and commentary in your inbox at 6 a.m. ET.
Ideas
The US Needs a Third Missile Defense Site

It’s time to reverse the decline in spending and start improving our missile defenses to keep pace with growing threats. By Sen. Jim Inhofe 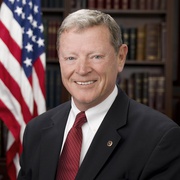 Ten years ago this month, the United States began to address its vulnerability to limited long-range nuclear missile strikes when the first ground-based interceptor (GBI) became operational at Fort Greely, Alaska. The president and Congress share a joint duty to protect the American people and not allow potential adversaries to hold U.S. foreign policy hostage by threatening nuclear attacks against our homeland.

Yet despite this consensus, our homeland missile defense system is not as robust as it must be to stay ahead of a growing range of threats. Designed to last 20 years, the GBIs and supporting infrastructure are starting to show their age due to a lack of investment in sustainment and modernization. It’s time to reverse the decline in spending and start improving our missile defenses to keep pace with missile threats that will only increase in numbers and complexity in the coming years.

The Ground-Based Midcourse Defense (GMD) system in place today comprises 30 GBIs and supporting radars designed to intercept long-range North Korean ballistic missiles outside the atmosphere and thousands of miles away from U.S. shores. Fearing an increase in the threat from North Korea, the Defense Secretary announced in March 2013 the deployment of an additional 14 GBIs in Alaska by 2017.

The budget for homeland missile defense has been in decline over the past five years. In 2009, the administration curtailed GMD development in order to focus on regional, shorter-range missile defense systems. Funding for GMD declined from $2 billion in Fiscal Year 2008 to about $1 billion per year from 2010 through 2015 – despite the system showing signs of aging that could compromise its reliability. The simple fact is that there hasn’t been enough funding allocated to GMD to fix problems associated with flight test failures, replace obsolete technology, and develop a more effective system. This needs to change.

Repeated intercept test failures and the recommendations of an outside review panel have prompted the Defense Department to take steps to improve the reliability of the GMD system and begin development of a next-generation kill vehicle – the crucial component which sits atop the GBI and performs the actual intercept. I commend the administration for these actions, but their budget isn’t up to the task: funding for GMD will average about $1 billion per year over the next five years – about half of what it was when President Barack Obama took office. Improving the reliability of the current GBI must be our priority, but without a fully funded modernization program, we risk ending up with a reliable but obsolete system in another five years if threats continue to emerge as widely predicted.

Shrinking missile defense budgets also make the homeland increasingly vulnerable to a potential Iranian nuclear ballistic missile threat. Both President George W. Bush and President Obama deemed it necessary to field a third GMD site to enhance protection against missiles launched from the Middle East (Bush intended 10 GBIs in Poland; Obama replaced this with a variant of the SM-3 missile, also in Poland). The administration canceled plans for a third site – despite top military commanders testifying that an east coast GBI site would “allow us the battle space to optimize our defense against future threats from Iran and North Korea.” Simply put, a third site would lower risk and increase our ability to defend the homeland.

Our intelligence services have continuously told us that Iran is making progress toward an ICBM capability and I have little confidence that Iran will ultimately decide to forego a nuclear capability despite ongoing negotiations. Therefore, it would be irresponsible for us to wait until the threat is upon us to bolster our defenses. Congress has directed the Defense Department to conduct the necessary planning and site surveys so that a future deployment could be executed as quickly as possible.

Another casualty of tight budgets has been the long-standing objective of shooting down ballistic missiles in their boost phase – just after launch, when they are most vulnerable and have yet to deploy countermeasures. The Missile Defense Agency today has no boost-phase development effort, even though ground, space or sea-based boost phase defenses could potentially prove to be the most cost-effective means to defend against large numbers of attacking missiles.

Thanks to decisions made decades ago, the United States now enjoys a good measure of protection against limited nuclear ballistic missile strikes. We simply can’t allow complacency and tight budgets to erode this protection. We must find the will and money to modernize and expand today’s GMD system while continuing research on defensive technologies that could eventually make ballistic missiles impotent and obsolete, as President Ronald Reagan imagined some 30 years ago.

Sen. Jim Inhofe is a Republican senator from Oklahoma and ranking member of the Senate Armed Services Committee.

NEXT STORY: NATO Must Boost Its Cyber Defense Capabilities Now