Perspecta's View: Six Steps for DES to Capture Innovation
Skip to Content
Get all our news and commentary in your inbox at 6 a.m. ET.
Ideas
The Cold War May Be Over, But the Fight Against Russia Isn’t

When it comes to visible signs of strength in Eastern Europe, NATO and Russia are going in opposite directions. By Mark Seip 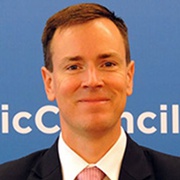 Last week Sweden hunted down what was widely believed to be a Russian submarine in its waters, and Estonia accused Russia of once again violating its airspace. These incidents are just two in a long list of Russian actions designed to coerce its neighbors through intimidation, creating increased tension throughout the region. In acknowledging old-school geopolitics, the United States and NATO must use lessons from the Cold War to check Russian aggression and instill resolve into the alliance.

When it comes to visible signs of strength, NATO and Russia are going in opposite directions.

The U.S. footprint in Europe once numbered over 250,000 troops, but now only 30,000 remain within two combat brigades. U.S. battle tanks number in the dozens where they once numbered in the hundreds, and F-15 fighter aircraft reductions are scheduled for later this year. Meanwhile, European states have cut almost 160,000 troops since 2010. Great Britain, the second largest military force in NATO after the United States, is cutting 30,000 personnel for an end-strength of 147,000 by 2020.

Russia by comparison has 130,000 troops near its European border alone, plus approximately 700 aircraft, 1,200 tanks, and large numbers of heavy mechanized equipment, according to an International Institute of Strategic Studies report. During the height of the crisis in Ukraine, Putin mobilized as many as 150,000 soldiers along the border within weeks to demonstrate his resolve. President Barack Obama’s response: mustering a 700-person company to the Baltics.

It is not just the size of Russia’s forces but how President Vladimir Putin is applying them. When Russia’s western push with masked separatist forces into Ukraine beyond Crimea stalled, Putin stepped in with conventional Russian forces to ensure the separatist’s success and Kiev’s submission. Those same rebels with Russian assistance now target the strategic port city of Mariupol, which if taken will effectively provide a land route from Russia to Crimea, further weakening Ukrainian influence.

The Cold War is over. But it did not end in peace.
Russian President Vladimir Putin

Not content with military force alone, Russia is also using energy as a coercive tool. It twice cut off fuel to Ukraine in the last eight years, including the winter of 2009, and did so again this June. Recent news reports hint at a deal to reopen the supply lines, but Russia continues to add demands to Ukraine before they will sign. In fact, Russia went to the next level by threatening those who would buy Russian gas and then resell it to Ukraine. Under Moscow’s pressure, Hungary told Ukraine that there would be no gas this winter from its pipelines.

Other nations, NATO and non-NATO alike, are also feeling Russia’s heavy hand. On June 12, Latvia launched four air intercepts in a single day due to Russian action near its border. Russian aircraft then violated Finland’s airspace three times in a single week in August, eliciting a rare public condemnation from Helsinki. And on Sept. 17, two high-speed Russian attack aircraft penetrated Sweden’s airspace, prompting long-time Swedish leader Carl Bildt to describe the flights as “the most serious aerial incursion by the Russians during my years as foreign minister.”

On the ground, the most recent large-scale Russian exercise in the region involved over 70,000 personnel and simulated the Baltics and Finland as “enemies” of Russia and its ally Belarus. In a deliberate shot at NATO, a day after Obama’s visit to Estonia where he reaffirmed the alliance’s commitment to protect its Baltic members, Russian special forces abducted an Estonian intelligence officer in Estonia. And in case there was any doubt as to Russia’s renewed sense of strength regarding its neighbors, Putin told Ukrainian President Petro Poroshenko this summer that not only could he be in Kiev in two days, but “Riga, Vilnius, Tallinn, Warsaw or Bucharest, too,” citing the capitals of five NATO countries near Russia’s borders.

Even as they strive to avoid a second Cold War, U.S. leadership should use lessons from that era to check Russian aggression. In the short term, the United States must commit greater permanent ground forces and push them forward as soon as possible. Positioning larger numbers of American men and women with the accompanying heavy equipment in Europe would be an unambiguous signal of resolve to both allies and to Russia. Additionally, those forces should be stationed forward into the eastern NATO members such as Poland or Romania, or at a minimum exercised in those states on an increased and larger basis.

Intelligence looks where leadership wants it to look, and after 1991 the spotlight moved on.

In the medium term, the United States needs to go back to some tough love with certain allies, especially Germany and those on the southern flank. The desire from Washington that as the United States stepped down Europeans would collectively step up has proven elusive. Factions have formed, prohibiting assertive reactions from the alliance and providing greater freedom of movement to Moscow. Washington’s ability to cajole other capitals during the height of Cold War tensions with Moscow provided the mettle needed to meet the challenge from the east. Washington must once again provide a firm hand with those allies on the sidelines to get into the game so that the alliance as a whole can answer with one strong voice.

In the long term, the United States needs to re-energize the intelligence gathering on Russia. This aspect of the rivalry between the two nations was legendary and perhaps the United States’s best asset during that era. However, intelligence looks where leadership wants it to look, and after 1991 the spotlight moved on. To redevelop a strong capacity, especially in the human intelligence arena, will take time. Therefore, senior leadership needs to reallocate or better yet increase gathering resources now towards Russia so that strategic actions such as the Crimea grab don’t once again catch the U.S. off guard.

On Friday, Putin declared, “The Cold War is over. But it did not end in peace.” His desire to reassert Russian dominance is clear and Russia is once again a distinct threat on NATO’s doorstep. Despite sanctions and pointed diplomatic language, it continues to harass those in its neighborhood, creating tension and doubt among allies and partners.  An aversion to a new Cold War should not equal a lack of firm, credible action in the face of unchecked aggression. Therefore, the leaders of the United States and Europe must show the political will to commit greater forces now to NATO’s eastern European members.

NEXT STORY: More Than 6,000 Afghan Interpreters Are Stuck in Bureaucratic Limbo