Dempsey warns of perpetual war; Green Berets will shift from Afghanistan to Africa; LG Neller may be next USMC Commandant; F-35 under the microscope; And a bit more.

CORRECTION: The original headline of Thursdays D Brief incorrectly placed quotation marks around the phrase “perpetual war,” which inadvertently attributed the phrase to Joint Chiefs Chairman Gen. Martin Dempsey. He did not say that phrase and those quotation marks have been removed.

Multiple but still-unconfirmed reports have come in this morning of a possible active shooter at the Washington Navy Yard. Police and security officials have flooded the scene—here’s a snapshot of that from Military Times’ Leo Shane III—where a lockdown and shelter-in-place order remains in effect.
“No incident can be confirmed as of yet,” the Navy said in its release half an hour ago. Military.com’s Richard Sisk has the latest need-to-knows over here.

And back at the Pentagon, Gen. Martin Dempsey, the soon-to-be-retiring chairman of the Joint Chiefs of Staff, is telling the military to dig in for a long war, one involving non-state actors in a battle that looks a lot like the current fight in Iraq and Syria. America’s top military officer issues a bleak assessment of the global security situation in his new National Military Strategy, a plan getting its first update since 2011. Since then, “global disorder has trended upward while some of our comparative advantages have begun to erode,” Dempsey said at the Pentagon Wednesday.
The Take Away: “We are more likely to face prolonged campaigns than conflicts that are resolved quickly… that control of escalation is becoming more difficult and more important… and that as a hedge against unpredictability with reduced resources, we may have to adjust our global posture.”
The Threats: “Violent extremist organizations” like the Islamic State, hybrid wars in which nations like Russia support militia forces fighting on their behalf in Eastern Ukraine threaten national security interests, Dempsey says.
Who He Calls Out: The usual suspects. Russia: “[I]t … has repeatedly demonstrated that it does not respect the sovereignty of its neighbors and it is willing to use force to achieve its goals.” Iran: “It is a state-sponsor of terrorism that has undermined stability in many nations, including Israel, Lebanon, Iraq, Syria, and Yemen.” And don’t forget about their nuclear ambitions. North Korea: For its “pursuit of nuclear weapons and ballistic missile technologies” and the Sony cyber hack. China: For its “aggressive land reclamation efforts that will allow it to position military forces astride vital international sea lanes.”
Putting it in Writing: The new strategy codifies many statements and assessments made in recent years about the spread of instability. As Defense News’ Aaron Mehta points out: “The contents of the document should be no surprise to those who follow the Pentagon. It is a straightforward military document, devoid of politics. The words ‘budget’ and ‘sequestration’ are nowhere to be found.”
Speaking of long wars, Air Force Special Operations Command reminds us it’s been more than 5,000 days since the military first deployed to Afghanistan following the Sept. 11, 2001, attacks. More here.

We now have our fifth new selection to take a seat at the Joint Chiefs of Staff in Marine Lt. Gen. Rober “Bob” Neller, who President Barack Obama will nominate to replace Gen. Joseph Dunford as commandant of the Corps, Defense Secretary Ash Carter said yesterday.
“Neller, 62, now serves as commander of Marine Corps Forces Command in Norfolk, Virginia, where he oversees deployment planning and execution and East Coast Marine bases. He also commands Marine Corps Forces Europe,” according to Military Times. “A 40-year Marine infantry officer, Neller has seen operational experience during wartime and peace, with deployments to Iraq, Somalia and Panama.”
Quick rollup of the others awaiting Senate confirmation: Dunford (of course); Gen. Mark Milley, commander of Army Forces Command, has been nominated to replace Gen. Ray Odierno as the Army’s chief of staff; Adm. John Richardson, current chief of naval reactors, could be the new chief of naval operations; and Gen. Paul “man under the flattop” Selva, Transportation Command’s current chief, could be the next vice chairman.
Wednesday’s “unexpected choice” of Neller could spell the end of the road for SOUTHCOM’s Gen. John Kelly as well as Gen. John Paxton, Dunford’s assistant commandant, Military Times adds.

In exactly two weeks—July 16—take a deep-dive into the DOD Insider Threat Program as our Tech Editor Patrick Tucker sits down with Patricia Larsen, Co-Director of the National Insider Threat Task Force; and Mark Nehmer, Deputy Chief, Implementation, DoD Insider Threat Management and Analysis Center, Defense Security Service. The event gets under way at 8 a.m. EDT, at the CEB Waterview Conference Center in Arlington, Va. Register for your spot here.

After killing at least 50 Egyptian soldiers, a group of terrorists affiliated with the Islamic State is looking to seize new territory in northern Sinai province, potentially hitting a major new milestone for the group’s foothold outside of the standard Syria and Iraq battlefields.

Just days after the UN celebrated the 70th anniversary of the signing of its Charter, the Israeli and Russian ambassadors to the UN expressed serious reservations about the purpose of the organization tying together nearly 193 nations in the name of security and peace. The Atlantic’s Matt Thompson has more from the Aspen Ideas Festival, here.

Welcome to Thursday’s edition of The D Brief, from Ben Watson and Marcus Weisgerber. The July 4th holiday begins tomorrow for many of our readers; so heads up now, gang, that we’ll see everyone again on Monday. You’ll find our subscribe link here. (Want to read it in your browser? Click here.) And feel free to send us what you like, don’t like, or want to drop on our radar right here at the-d-brief@defenseone.com.

After focusing almost a decade and a half of its missions in Afghanistan, the Army’s Fort Bragg-based 3rd Special Forces Group is shifting to Africa, Drew Brooks of The Fayetteville Observer initially reported yesterday.
“The transition back to Africa comes as demands and operations change; 3rd Group’s transition is the result of an overarching look, led by U.S. Special Operations Command and the geographic combatant commands, at how special operations forces were being employed and allocated,” Col. Robert Wilson, the group’s commander, told Army Times. “We’re not at war in the African continent…There’s a host of problems, particularly in northern and western Africa, with violent extremist organizations and unrest,” he added. Read the rest here.

Meantime in Yemen, rocket attacks killed nearly three dozen in the port city of Aden yesterday, including 18 civilians and 13 rebel fighters, AP reported. The UN, meanwhile, said the country is “one step away from famine” as a daunting 80 percent of the population needs assistance. The World Health Organization updated their latest figures from the conflict, putting the death toll at more than 3,000 and the number of wounded well over 14,000 to date.

The UN’s nuclear chief is in Tehran while foreign ministers keep up their negotiations from Vienna, with zero breakthroughs having emerged from the deadline-breaking talks so far, AP reports.
The Plan B for halting Iran’s nuclear program—a massive bunker-buster bomb known as the Massive Ordnance Penetrator—wouldn’t destroy Tehran’s program, Defense Secretary Ash Carter told reporters yesterday. Independent Sen. Angus King of Maine, who sits on the Senate Armed Services and Intelligence committees, said much the same thing to Bloomberg’s Tony Capaccio over here.

A scathing critique of the F-35 Joint Strike Fighter’s dogfighting abilities, or lack thereof, has been making the rounds, largely on social media. War is Boring’s David Axe obtained a report written by the F-35 pilot who got bested by an F-16, a 20-year old plane the Joint Strike Fighter is set to replace. Axe: “A test pilot has some very, very bad news about the F-35 Joint Strike Fighter. The pricey new stealth jet can’t turn or climb fast enough to hit an enemy plane during a dogfight or to dodge the enemy’s own gunfire, the pilot reported following a day of mock air battles back in January.”
But the F-35 program office says Axe’s report “does not tell the entire story.” The F-35 used in the mock dogfight, called AF-2, is a test plane and does not have special combat equipment, technology that allow F-35s to see, track and shoot down other planes at long ranges. And it didn’t have the stealth coating, which makes the F-35 virtually invisible to radar.
F-35 program spokesman Joe DellaVedova: “Aircraft AF-2 did not have the mission systems software to use the sensors that allow the F-35 to see its enemy long before it knows the F-35 is in the area. Second, AF-2 does not have the special stealth coating that operational F-35s have that make them virtually invisible to radar. And third, it is not equipped with the weapons or software that allow the F-35 pilot to turn, aim a weapon with the helmet, and fire at an enemy without having to point the airplane at its target.”
What happens when the F-35 has its combat system active: “There have been numerous occasions where a four-ship of F-35s has engaged a four-ship of F-16s in simulated combat scenarios and the F-35s won each of those encounters because of its sensors, weapons, and stealth technology,” DellaVedova said.
Maj. Gen. Jeffrey Harrigian, director of the Air Force F-35 Integration Office at the Pentagon: “It is too soon to draw any final conclusions on the maneuverability of the aircraft. The F-35 is designed to be comparable to current tactical fighters in terms of maneuverability, but the design is optimized for stealth. This will allow it to operate in threat environments where the F-16 could not survive.” More from the Washington Post here.
And a military pilot who has flown the F-16 and F/A-18 also has issues with the F-35 test pilot’s critique. C.W. Lemoine in Fighter Sweep with more here.

And finally today, and in a spirit of patriotism (or at least a kind of patriotic fashion), here’s everything you need to know—and a lot more—on the Army’s new uniforms, which hit shelves yesterday. We leave you with two options for getting up to speed on the new unis, the first from the Army itself, here; and the second from the NYT’s “Fashion & Style” section. That’s right. Camo is cool, man, as the Times reports from Kaufman’s Army/Navy store on 42nd Street in New York. 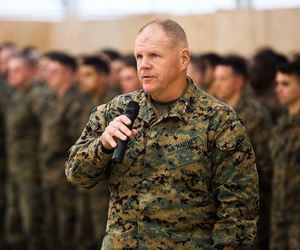 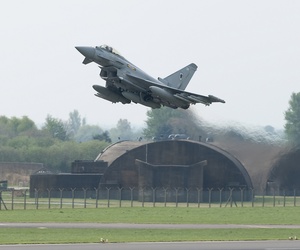 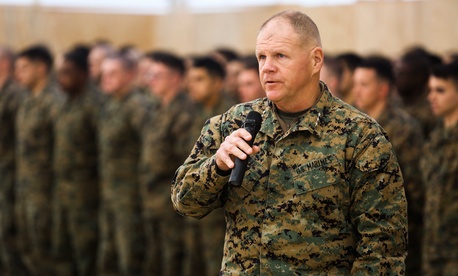 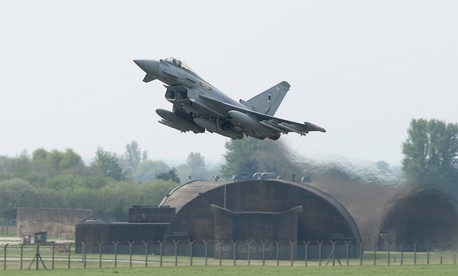