Best to leave that Afghan drawdown for the next U.S. president. The White House is set to announce plans to keep more than five thousand troops in Afghanistan after 2016. “Under pressure at home and abroad, Mr. Obama decided—following a strategy review—to maintain the current American force of 9,800 troops in Afghanistan through most of next year, and to leave a force of 5,500 U.S. troops in the country in 2017, when he leaves office,” senior administration officials told the Wall Street Journal. “In a further strategy change, the 5,500 remaining troops will be stationed at points far beyond the Afghan capital of Kabul, officials said, serving in Jalalabad in the east, Kandahar in the south, and at Bagram Air Field.”
The impetus: “The shift follows a sharp rise in violence, including an assault by Taliban militants who temporarily seized control last month of the northern city of Kunduz. The policy reversal also comes amid growing concerns that a drawdown of U.S. forces in the country could create an opening for Islamic State militants who have gained control of large parts of Iraq and Syria.”
The rhetoric: “The narrative that we’re leaving Afghanistan is self-defeating. We’re not, we can’t and to do so would not be to take advantage of the success we’ve had to date,” Defense Secretary Ash Carter said Wednesday.
The mission: “the same—counterterrorism operations and training and assisting Afghan forces.”
The cost: “about $14.6 billion annually, an increase from the 2014 plan which costs about $10 billion a year.”
For what it’s worth: “Combat operations in Afghanistan ended in December after more than 13 years, making it the longest war in U.S. history,” Bloomberg added. “Obama’s original plan was to leave about 1,000 U.S. personnel in the country to protect the embassy and carry out limited operations.”

Shoring up Homs for Damascus. Russian jets this morning are accompanying Syrian and Hezbollah troops in a new offensive to clear rebel-held towns north of the country’s third-largest city. The near-term goal? “Recapturing the area would help reassert Assad’s control over the main population centres of western Syria and secure territory linking Damascus to the coastal heartland of his minority Alawite sect,” Reuters reports. The mid-term goal: prep “for a major ground operation around Aleppo city, close to the Turkish border.”
Russia’s incursion into Syria is forcing the Pentagon to rewrite its European strategy, Defense One’s Marcus Weisgerber reports. U.S. military planners are rethinking everything from training to nuclear deterrence in the wake of unexpected Russian military deployments in eastern Ukraine and Syria – and in anticipation of more to come.
“We must write a new playbook, which includes preparing to counter new challenges like hybrid warfare and cyber, better integrating conventional and nuclear deterrence in Europe, as well as adjusting our posture and presence to adapt and respond to new challenges and threats,” U.S. Defense Secretary Ash Carter said Wednesday at the Association of the United States Army’s annual conference in Washington.
The known knowns: The new plan “needs to rely on different kinds of mobility on highly ready forces that can respond very quickly,” Carter said. These forces must be prepared to encounter high-end combat and proxy militias, the so-called “little green men,” as they have been called in Ukraine. Read the rest, here.
To that end: the U.S. is poised to open a new storage site in the southern Lithuanian town of Marijampolė next month, Stars and Stripes reports from Germany. The primary perk: “Combined with the European Activity Set — the pre-positioned fleet of heavy equipment and vehicles rotational forces already use — the new supply activity will make forward-deployed units less reliant on troops in the rear.” More here.
Russia’s modernized military is on full display, and the West has taken note of  “aircraft never before tested in combat, including the Sukhoi Su-34 strike fighter, which NATO calls the Fullback, and a ship-based cruise missile fired more than 900 miles from the Caspian Sea, which, according to some analysts, surpasses the American equivalent in technological capability,” the New York Times reports. “Russia is not only bringing some of its most advanced hardware to the fight, it has also deployed large field kitchens and even dancers and singers to entertain the troops — all signs that Moscow is settling in for the long haul, American analysts said.” More on that, here.
Turkey, meanwhile, just summoned the American and Russian ambassadors over fears both are helping the Kurds. The notable precursor to Ankara’s move are reports that the U.S. military “air-dropped arms and ammunition earlier this week to rebel groups preparing to fight the Islamic State in northern Syria. A Kurdish official in Syria said arms were also sent to the YPG,” the Washington Post writes. However, “American officials say the equipment is meant only for the Arab fighters in the coalition,” the NYTs adds. “But multiple fighters on the ground say that in practice, they operate under Kurdish auspices.”

The U.S. is sending hundreds of troops to the Central African country of Cameroon to bolster the intelligence-driven fight against Boko Haram. The first tranche of 90—part of a force intended to number as many as 300, all of which are intended for supporting operations, not direct combat—arrived Tuesday ahead of MQ-1 Predator drones for surveillance against the group, the Wall Street Journal reported. “Once the full U.S. force of 300 arrives, the troops could take on the additional task of training Cameroon forces, a military official said.”
ICYMI: France’s military has been busy in Africa for years, and “an entire generation of American decision-makers…are now discovering that French foreign policy is compatible with Washington’s,” Jean-Baptiste Jeangène Vilmer, policy advisor on security issues at the French Ministry of Foreign Affairs; and Olivier Schmitt, a political science professor at the University of Southern Denmark’s Center for War Studies, write in War on the Rocks.
By the way: Cyber attacks on African networks are occurring with greater frequency than you might think, warns cybersecurity expert Paul Caiazzo in The Cipher Brief. You’ll find a bit more on the global cyber front below the fold.

Hacking arrests won’t stop Chinese espionage—but the arrests are part of a larger move-and-countermove drama that is slowly improving the U.S. situation, the Council on Foreign Relations’ Robert Knake writes, adding some fabulous color to his argument with a story about the thumb drives given to U.S. think-tankers talking with their Chinese counterparts in 2010.

Here are the five “coolest robots” from AUSA, which wound down yesterday, via Tech Editor Patrick Tucker. There’s the workhorse HDT Micro Utility Vehicle, something called the “kamikaze drone,” and another named the Neany Arrow, a sort of go-kart with wings that can take off and land by itself. Neany also showed off its unmanned DragonSpy boat, whose camo alone drew a crowd.

Welcome to the Thursday edition of The D Brief, from Ben Watson and Bradley Peniston. Tell your friends to subscribe here: http://get.defenseone.com/d-brief/. Want to see something different? Got news? Let us know: the-d-brief@defenseone.com.

Happening today: U.S. Defense Secretary Ash Carter welcomes the Republic of Korea’s President Park Geun-hye in a full honor parade at the Pentagon at 9:20 a.m. EDT. Park will enter a Pentagon that is dimming its lights to save electricity in October—with the net savings equaling enough power to light 100 homes for a month. As WSJ’s Gordon Lubold tweeted, “good but #needaflashlight.”

Kenya is among a host of new nations who have joined the cyber espionage game, AP reports this morning. “Internet watchdog group Citizen Lab said in a report published Thursday that it had found 33 ‘likely government users’ of FinFisher, one of the world’s best-known purveyors of spyware…The spyware doesn’t come cheap. Also leaked last year was a price list suggesting that a suite of FinFisher products — including a full set of attack software, booby-trapped thumb drives and nearly a dozen different training courses — retailed for some 3 million euros ($3.5 million.) That price tag doesn’t seem to have put off government agencies in Paraguay, Kenya, Macedonia or Bangladesh.”
The world’s leading nations need to kick-start an arms control agreement on cyber, but it can’t be “modeled on the treaties of the nuclear era,” where “large, costly, observable weapons” were the focus, argues Joseph S. Nye Jr., professor at the Harvard Kennedy School, in the pages of WaPo.
In case you had forgotten, cyberspace is the second front in Russia’s clash with NATO, Bloomberg reports, highlighting attacks on “the U.S. House of Representatives, a German steel plant that suffered severe damage” and the Polish stock market…Behind the smokescreen was a group of hackers with ties to the Russian government, according to three people familiar with the Polish investigation. The incident was viewed by Polish investigators as a stark warning to the country, a member of the North Atlantic Treaty Organization intent on driving a strong alliance response to Russia’s moves in eastern Ukraine.” More, here.

U.S. Army captain to receive Medal of Honor for heroics in Afghanistan three years ago. Capt. Florent Groberg, 32, will become the 10th living service member to receive the nation’s highest award for valor for actions in Afghanistan or Iraq, Army Times reports. Groberg’s quick-thinking—shoving a suicide bomber to the ground moments before detonation—is recounted at length here.
And gun makers are lining up to replace the U.S. Army’s Beretta M9 pistol, Army Times reports. Who’s in the running? SIG Sauer, Glock, Smith & Wesson and FN Herstal. The service is not only looking into its 9mm options, but also into .40- and .45-caliber variants. More here.

Apropos of nothing: Never be that champagne bottle between Michelle Obama and a ship. The First Lady crushed it this weekend for the christening of the Navy’s newest and most advanced submarine, the USS Illinois. Catch the ceremonial destruction in one great photo of the occasion right here.

And lastly today: a backwoods safety tip. It is never a good idea to put out a garbage fire by pulverizing the flames with your van…a van that just happens to be loaded down with ammunition. That’s what happened Tuesday just outside of Liberty, Mo. A local sheriff’s deputy spotted the scene after tracing a plume of black smoke to its source, and then hearing the sound of rounds popping off inside a burning van located just a short distance off the highway. The van’s tires erupted in no time at all, compelling the driver to ditch his vehicle with a full tank of gas. “Eventually, the deputy found the owner of the vehicle watching the fire from a distance,” the Kansas City Star reported. “It seems like he’s just going to have to take a loss on that vehicle because I don’t think [insurance is] going to cover it,” a police spokesman said. 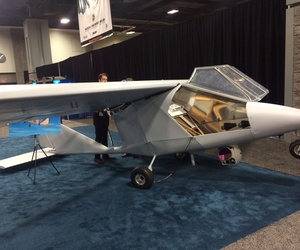 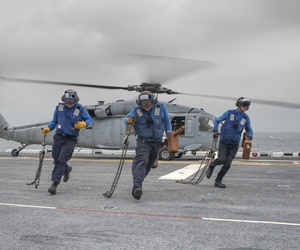 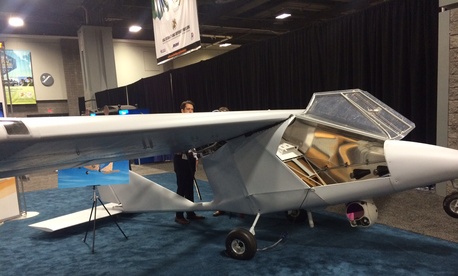 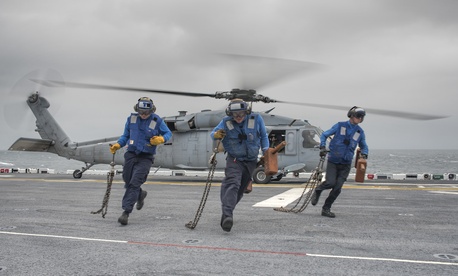