The Pentagon may add more fire bases in Iraq to help Baghdad’s troops with their epic Mosul offensive. “Rear. Adm. Andrew Lewis, the vice director for operations, said there may be situations where the U.S. would either open a base or reopen one that was used in the earlier Iraq war,” the Associated Press reported Wednesday. “Those outposts, he said, would be behind the front lines, and would be used the way U.S. Marines are operating out of what has been known as Fire Base Bell, outside Makhmour.”

American troops could man “up to three temporary bases, on the north-south route from central Iraq to the northern city of Mosul, [to] advise Iraqi security forces, provide logistical support so Iraqi troops can move toward Mosul and even ground base support fire,” defense officials told The Daily Beast.

It’s part of the Pentagon’s push to accelerate the war against the Islamic State group as part of a wider effort to capitalize on cities retaken from ISIS while others, like Hit—where Baghdad’s beloved counter-terrorism police have reportedly advanced to the center of the city—are still underway.

There are already some 200 Marines near Makhour, and the U.S. military hasn’t said how many it is considering for the Next Step. Regardless of that info-gap, TDB writes, “The plan to move so many troops close to the fight is just another sign that the Iraqis cannot take Mosul without heavy U.S. assistance.”

By the way, here’s why that Marine “fire base” was built: The Iraqis set up their own army base near Makhmour months before the Mosul offensive was announced, WSJ reports, “making it a target for routine Islamic State rocket fire, some officers said, though officially Iraq’s military disputes that assessment. To help protect it and provide offensive firepower, the Pentagon deployed an artillery contingent of U.S. Marines who established their own base and quickly,” but the troops came under rocket fire almost immediately, killing one Marine. More on the fraught scene in northern Iraq, here.

Starvation in Fallujah: Iraqi security forces are being pressured by activists from Human Rights Watch to lift their siege of the ISIS-held city of Fallujah, encircled since late 2015, after reports “residents were making soup from grass and using flour from ground date seeds to make bread.” For what it’s worth, calls to send aid to besieged Fallujah residents have been out since at least February.

Libya was one step closer to establishing a functional government “after a rival administration dissolved itself after years of factional power struggles” late Tuesday. But now “Tripoli’s unrecognised Prime Minister Khalifa Ghweil urged his ministers not to stand down in a statement on Wednesday,” al-Jazeera reports this morning.

What was about to happen: “The decision by the Tripoli administration to disband [was] a major step forward in attempts by the U.N. and the U.S. and other foreign powers to restore a semblance of stability in Libya and blunt the growth of Islamic State, which has exploited the chaos in the North African nation and gained a foothold along its Mediterranean coast, a stone’s throw from Europe,” the WSJ reported from Cairo.

The Pentagon’s AFRICOM commander, Gen. David Rodriguez, briefs the press this morning at 11 a.m. EDT. The presser comes just just a few weeks after the U.S. military began stepping up its counter-terrorism game, reporting the probable deaths of some 150 Shebab fighters in Somalia in March. It also follows recent gains by African Union forces, who on Tuesday said they killed a half-dozen Shebab commanders.

“In the next few months, it’s going to get nasty,” predicted Cedric Barnes, the Horn of Africa project director for the International Crisis Group, a research organization that studies conflicts. More from Somalia, here.

Note to Congress: there are already loads of terrorists in federal prisons. One of the main reasons given by U.S. lawmakers who oppose closing the detention facility at Guantanamo Bay, Cuba—that it would be simply too risky to house the “baddest of the bad” terrorists stateside—may have just lost some of its sting.

A New York Times report details the current captivity of 443 convicted terrorists in U.S. prisons. “The New York Times was able to confirm locations for about a third of the terrorists, shown on the map. The Department of Justice would not release the names or locations of the other prisoners who had been convicted of terrorism.”

For what it’s worth: “Many of the most well-known convicted terrorists are at the highest security prison in the country: the supermax in Florence, Colo., about 100 miles south of Denver. Zacarias Moussaoui, a member of Al Qaeda who was directly linked to the Sept. 11, 2001, attacks, is there, as is Dzhokhar Tsarnaev, one of the Boston Marathon bombers. Richard Reid, known as the shoe bomber, and Umar Farouk Abdulmutallab, the underwear bomber, are also held there.”

More than two dozen are held at “two federal prisons in Indiana and Illinois that have special Communications Management Units, designed to isolate certain prisoners from other inmates and limit contact with the outside world.” Read the rest, here.

A firewalled nuclear-weapons fund is bad budgeting and bad planning. Gordon Adams and Richard Sokolsky slam a Navy-Air Force proposal gaining support on Capitol Hill, calling it a budget gimmick that would promote waste and push off hard choices about tomorrow’s nuclear arsenal. Read that, here.

Welcome to the Thursday edition of The D Brief, by Ben Watson and Bradley Peniston. On this day in 1945, the largest battleship ever built, Imperial Japan’s Yamato, is sunk by U.S. warplanes off Okinawa. Subscribe to the D Brief: http://get.defenseone.com/d-brief/. Got news? Let us know: the-d-brief@defenseone.com.

NATO might send AWACS to support counter-ISIS ops. That’s what NATO Secretary General Jens Stoltenberg said during a visit to Washington on Wednesday. Stoltenberg said he and U.S. Defense Secretary Ash Carter spoke this week about the alliance contributing a surveillance plane. “That is on the table now,” Stoltenberg said. “It’s going to be addressed in NATO.” Last week, Carter told reporters that the Pentagon was “discussing with NATO the possibility of NATO participating [in the counter-ISIS mission] as NATO.” Many of the alliance members are participating in the campaign on their own. Stoltenberg said NATO needs to step-up its support for Iraq. Last week, the alliance started training Iraqi military officers in Jordan.

NATO “ready to assist Libya.” Now that one of the two competing governments in the country has stepped down, Libya will need NATO’s help, Stoltenberg said. “The demand [globally] for capacity building is growing,” he said. “That is why NATO needs to make training a core capability for the alliance.”

Speaking of training: Stoltenberg said the alliance needs “ a responsive, ready-to-go capability so that we can plan, coordinate and deploy advisory support and training missions faster and bring together the necessary tools for capacity building and training” just as the alliance is already doing in Afghanistan.

PACOM chief is keen to confront China in the SCS, if only the White House would give him a green light, Navy Times reports. “Adm. Harry Harris is proposing a muscular U.S. response to China’s island-building that may include launching aircraft and conducting military operations within 12 miles of these man-made islands, as part of an effort to stop what he has called the ‘Great Wall of Sand’ before it extends within 140 miles from the Philippines’ capital, sources say.”

Blunting that approach is National Security Adviser Susan Rice, who reportedly “imposed a gag order on military leaders over the disputed South China Sea in the weeks running up to the last week’s high-level nuclear summit, according to two defense officials who asked for anonymity to discuss policy deliberations. China’s president, Xi Jinping, attended the summit, held in Washington, and met privately with President Obama.”

Read the memo: “Sometimes it’s OK to talk about the facts and point out what China is doing, and other times it’s not,” an official familiar with its wording said. More here. And a bit more on Adviser Rice at bottom.

U.S. power grid alert: “Aggressive foreign government hackers broke into American companies 17 times between October 1, 2013, and September 30, 2014,” according to a Department of Homeland Security intelligence assessment from late January. “In two cases they snuck into U.S. petroleum organizations, and hackers are ‘suspected of exfiltrating data’ from one of them,” CNN reported Wednesday.

They hack “primarily to conduct cyber espionage … to conduct a damaging or disruptive attack in the event of hostilities with the United States,” the assessment read, adding, damaging cyberattacks against the American energy sector is “possible but not likely.” More from CNN here, or check out the assessment for yourself, here.

Who will be the next DNI? Not Mike Hayden, likely. The former CIA chief and media-friendly general has been whispered for the job for months in our ear, but now he’s come out endorsing…John Kasich? Doesn’t really help his chances with frontrunners Clinton and Trump. So, who’s it gonna be? Tell us who you’d like to see take over for Jim Clapper by emailing us here.

Your Thursday #LongRead: American government surveillance planes are working the U.S. skies, but don’t worry: they “usually take the weekends off,” Buzzfeed reported Wednesday. “Each weekday, dozens of U.S. government aircraft take to the skies and slowly circle over American cities. Piloted by agents of the FBI and the Department of Homeland Security (DHS), the planes are fitted with high-resolution video cameras, often working with ‘augmented reality’ software that can superimpose onto the video images everything from street and business names to the owners of individual homes. At least a few planes have carried devices that can track the cell phones of people below. Most of the aircraft are small, flying a mile or so above ground, and many use exhaust mufflers to mute their engines — making them hard to detect by the people they’re spying on.” Loads of data visuals on the topic, here.

How do the world’s far-flung militants acquire heat-seeking missiles, machine guns and more? Facebook, of course, NYT’s C.J. Chivers reports. “The weapons include many distributed by the United States to security forces and their proxies in the Middle East. These online bazaars, which violate Facebook’s recent ban on the private sales of weapons, have been appearing in regions where the Islamic State has its strongest presence. This week, after The New York Times provided Facebook with seven examples of suspicious groups, the company shut down six of them.”

Chivers’s findings “were based on a study by the private consultancy Armament Research Services about arms trafficking on social media in Libya, along with reporting by The Times on similar trafficking in Syria, Iraq and Yemen.” Catch his report here, or the ARS report, here.

His bottom line: “The world becomes more dangerous, not less dangerous, when America gets less involved in the world. I don’t mean invading and occupying and imposing—but leading, engaging.” Watch the rest, including a rant against 35-year-old Ph.Ds whom Hagel said talked too much to simply show how smart they are, here. 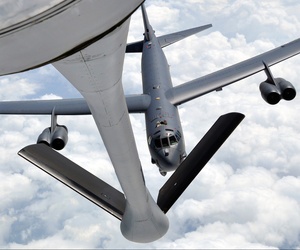 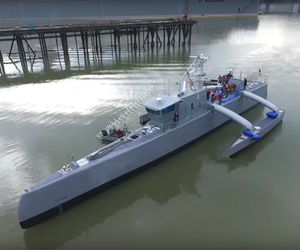 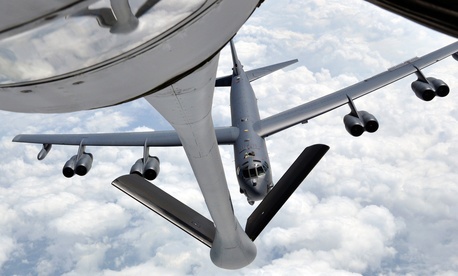 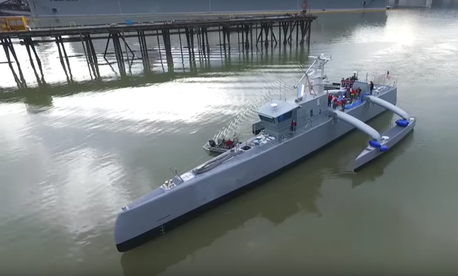