After a few false sightings on Thursday—which point to the many quieter tragedies throughout the Mediterranean over the past few months—Egypt’s military this morning says debris from MS804 has been found floating about 190 miles north of Alexandria, The Wall Street Journal reports. “The debris included personal belongings and parts of the Airbus Group SE A320, a military spokesman said in the Egyptian capital Cairo.”

As well, “Initial reports by the airline that the plane had transmitted a distress signal proved false, and a Pentagon official said a sensitive U.S. infrared satellite system hadn’t detected evidence of an explosion.”

So far no terrorist groups are known to have taken responsibility for the downed airliner, which is similar to how events unfolded in the wake of October’s downing of Metrojet flight 9268 over the northern Sinai. ISIS later said its Egyptian affiliate was responsible.

Dunford also said a decision on deploying U.S. troops to Libya could come at “any day,” the Washington Post’s Dan Lamothe reports. “There’s a lot of activity going on underneath the surface…We’re just not ready to deploy capabilities yet because there hasn’t been an agreement. And frankly, any day that could happen.”

He said some NATO members are interested in participating, “but the specifics of who and what would be involved remain unclear. The operation will likely focus on training and equipping militias that pledge loyalty to Prime Minister Fayez Sarraj, the leader of the new Libyan Government of National Accord (GNA), which is backed by the United Nations.”

And in case you were wondering, “There will be a long-term mission in Libya,” Dunford predicted, adding the critical caveat that NATO will need a request from Libya’s new government before it can act.

About that new government—it’s not entirely a done deal yet since “Sarraj’s government has not yet been accepted by either existing rival government in Libya, the Tripoli-based General National Congress (GNC) and the elected House of Representatives in the eastern part of the country. He also appears to be counting on support from militias in Misrata and forces loyal to Gen. Khalifa Hifter, a Libyan military officer who launched a campaign against the GNC and its Islamist links in 2014.”What’s more: “The Misratans and Hifter’s troops have been known to square off against each other in armed clashes.”

And about U.S. special operators, which U.S. officials confirm are already in Libya, “Dunford declined to comment on their operations Thursday,” the Post writes, “but said the United States is looking for ways to make ‘a unique contribution’ to the effort.” Read the rest, here.

ICYMI: Defense One’s Patrick Tucker has an explainer about those rival governments, here.

Hezbollah has reportedly sent a large convoy of rocket launchers to the front lines near Fallujah, Long War Journal reports off this video from a YouTube account linked to the group. Fallujah is increasingly important for not only Shiite fighters, but Baghdad, too, after pushing ISIS from the western border town of Rutba on Thursday. The Daily Beast reported Thursday Fallujah “could be the next big battle” in the war against the group.

Hezbollah is hardly a stranger to Iraq, as LWJ reminds us: “The Hezbollah Brigades has been involved in several operations within Anbar province in western Iraq. Last April, a month before the Islamic State took over the provincial capital of Ramadi, KH [Kata’ib Hezbollah] sent its troops to take part in operations near the city.” They also fought recently just east of Baghdad, near the town of Karmah.

And another Shiite group, Harakat al Nujaba, an “Iranian proxy that operates in both Iraq and Syria, has said it is clearing a road in eastern Anbar province in preparation for an upcoming offensive to retake Fallujah from the Islamic State. The leader of Harakat Nujaba, Akram al Kabi—a US-designated terrorist—said his ‘special forces’ are ready to assist Iraqi forces to recapture the city.”

Bottom line: If you were expecting the war on ISIS to get any less complicated, forget about it.

Come to the first-ever Defense One Tech Summit, on June 10. Join Defense Secretary Ash Carter and some of the brightest minds in military and consumer technology to discuss the future of innovation and national security at the Newseum in Washington, D.C. Reserve your seat, here.

How the Pentagon is preparing for a tank war with Russia. Reactive armor and cross-domain fire capabilities are just some of the items on the Army’s must-have list. Tech Editor Patrick Tucker reports, here.

If diplomacy fails, then what for Syria? Gayle Tzemach Lemmon asks:

What leverage has a United States that is so reluctant to fight?

The military isn’t fully tracking sexual assault reports. Watchdog says DOD has yet to comply with a new law to tally discharged troops who had reported being assaulted. Via GovExec, here.

Welcome to Friday’s edition of The D Brief, by Ben Watson and Bradley Peniston. On this day in 1845, the USS Constitution (yes, that Constitution) sailed from New York on a round-the-world journey (h/t @WWATMD). Send your friends this link: http://get.defenseone.com/d-brief/. And let us know your news: the-d-brief@defenseone.com.

Said Bibi in a televised reax: “The reshuffle in portfolios did not result from a crisis in faith between us. It resulted from the need to expand the government so as to bring stability to the State of Israel given the great challenges it faces,” Reuters adds.

In his exit speech, Yaalon cited “extremism, violence and racism in Israeli society that are threatening our national resilience.” He also elaborated somewhat on the decision via his Facebook page: “This morning I informed the prime minister that following his management in the latest developments, and in light of my lack of faith in him, I am resigning from the government and the Knesset and taking time out from political life.”

How could the new (and so far unconfirmed) guy, Bibi’s “long-time rival Avigdor Lieberman,” alter the U.S.-Israel dynamic? Read on to find out.

Whoever it is, the U.S. will be happy to meet him, State Department spox John Kirby said.

Speaking of new (but still unconfirmed) posts, the U.S. Navy’s highest-ranking woman just got the nod from President Obama to take the reins of American naval forces in Europe and Africa, Stars and Stripes reports. Adm. Michelle Howard, currently the Vice Chief of Naval Operations, “was nominated by President Barack Obama to lead U.S. Naval Forces Europe-Africa, the Naples-based command that oversees the warships, aircraft and sailors operating across the Atlantic and Mediterranean, the Defense Department announced Thursday.”

If approved, “the nomination would mark another milestone in Howard’s trailblazing career. She became the highest-ranking female officer in Navy history in 2014 after pinning her fourth star…Howard was the first black female officer to command a ship, the amphibious warship USS Rushmore, in 1999.”

Howard would take over for Adm. Mark Ferguson, who is retiring, Stripes writes. “She would also assume command of one of NATO’s operational headquarters, Joint Forces Command Naples, based in Lago Patria, just north of Naples.” More here.

Today in future toys: drone swarms will be flanking American F-35s, Air Force Chief Scientist Greg Zacharias told the website Scout Warrior in an interview. But they’ll not only be flying alongside the Joint Strike Fighters, the F-35’s pilot will be able to control them as they perform “sensing, reconnaissance and targeting functions.” Much more here.

In case anyone’s asking, the U.S. won’t be inviting allies to help with its top-secret B-21 bomber, Defense News reported Thursday after Lt. Gen. Arnie Bunch, the Air Force’s deputy assistant secretary for acquisition, told reporters at the Norwegian-American Defense Conference. He put it a little more bluntly: “I do not believe in any way shape or form it will be a thing we look at on the B-21.” That, here.

Speaking of drones, China is reportedly employing a big new drone to track American warships transiting the South China Sea. That from War Is Boring, here.

Finally this week: Yesterday we brought news of veterans who summited Mount Everest. Today we bring you the story of the bomb-suited marathon-running lieutenant. His name is Daniel Glenn, age 28, and he finished the Marine Corps Half Marathon in Fredericksburg, Virginia, wearing the 85-pound “Hurt Locker” outfit. “Glenn undertook the grueling run to benefit wounded warriors and says he never doubted his mental resolve to finish the race — but he says those 13.1 miles weren’t a walk in the park,” Navy Times reports.

“It was pretty hellish, to be honest,” he said. “As the race went on, my body was trying to shut me down and very much trying to veto my decision to keep walking in an 85-pound bomb suit.” Kudos to the LT. Catch video of the event, here. And have a great weekend, everyone! 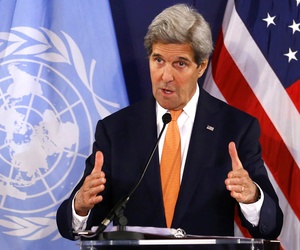 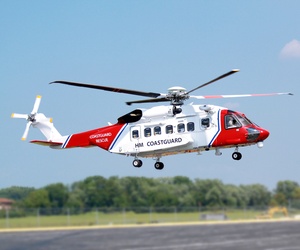 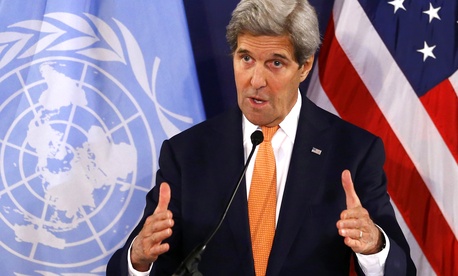 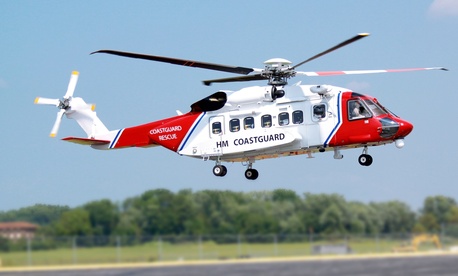