After Mosul, on to Raqqa ‘within weeks’; Russian carrier enters Med; Special operators, caught on video; Army puts lasers on Strykers; and just a bit more…

Speaking of the Brits, “The UK is to resume training the Syrian moderate opposition, sending a further 20 Ministry of Defence personnel to the Middle East to help them prepare for an eventual attack on Islamic State’s Syrian headquarters,” The Guardian’s Patrick Wintour reported Tuesday. “Fallon said that up to 20 UK personnel would deploy to locations in the region ‘to provide vetted members of the moderate Syrian opposition with the skills they need to continue to take the fight to Islamic State.’ But any British decision to help the rebels, however limited, will prove controversial. Previous attempts by the US and UK to train moderate forces have ended in disappointment and some embarrassment, with the forces collapsing in the face of attacks either by the Syrian government or Isis.”

The decision raises old questions about “vetted” Syrian rebels, Wintour notes. “The MoD insists moderate fighters exist in north-western Syria, and denies they are all extremists. Fallon has described a moderate in the Syria context as someone ‘prepared to live within a plural political settlement that can in the end be democratic and take Syria towards elections.’” More here.

A word about Raqqa: The American military’s tendency to “seduce and abandon” its partner forces in a conflict plagues Washington’s hopes for a coherent and lasting drive on the city often referred to as ISIS’s de-facto HQ, writes David Ignatius of the Washington Post.

The U.S. military has underestimated the number of civilians it has killed in airstrikes over Syria, the human rights group Amnesty International said Tuesday in a new report. That document lays out “11 attacks carried out by the US-led Combined Joint Task Force – Operation Inherent Resolve (CJTF-OIR) in Syria since 23 September 2014,” which Amnesty says killed as many as 300 civilians—the vast majority stemming from the operation to clear ISIS from the northern Syrian city of Manbij back in mid-July. Reuters has a roll-up of the findings, here.

Assad’s allied air force has its own new civilian casualty allegation to contend with: in northern Idlib province, an airstrike on a school appears to have killed at least 20 civilians, many of them children. More here, here and here.

Back to Europe: Kicking off the latest defense ministers meeting Wednesday in Brussels, Secretary General Jens Stoltenberg gave the stink-eye to Adm. Kuznetsov, the smoke-challenged Russian aircraft carrier: “We are concerned about Russian airstrikes on Aleppo” and the worsening “humanitarian catastrophe.” Defense One’s Kevin Baron, traveling with Carter to Paris, writes that the Stoltenberg said NATO is worried about Russia’s carrier group being used for more attacks, and that’s a main focus of the next two days. Defense Secretary Ash Carter arrived at NATO headquarters Wednesday for the meeting and is expected to brief reporters later in the day.

Carter arrived from Paris and the latest gathering of counter-ISIS country ministers, which included a special briefing from U.S. Special Operations Command’s Gen. Tony Thomas (which Carter announced, to everyone’s surprise, at a press conference).

Quick note about the Kuznetsov’s transit: “Warships led by the aircraft carrier Admiral Kuznetsov are expected to take on fuel and supplies at the Spanish port of Ceuta after passing through the Straits of Gibraltar on Wednesday morning,” The Guardian reports. And that’s raised a few eyebrows in the NATO alliance; enough, in fact, that “Spain’s representative, Pedro Morenés, said the government would seek clarification from Russia about ‘the purpose and destination’ of the ships, which he confirmed had ‘prior authorisation’ to stop at Ceuta.”

And a little more about the fueling point: “The enclave of Ceuta sits on the tip of Africa’s north coast, across the Straits of Gibraltar from mainland Spain, and bordering Morocco, which also lays claim to the territory. Although Ceuta is part of the EU, its Nato status is unclear, and since 2011 at least 60 Russian warships have docked there.”

On the Mosul front: Social media battlefield videos pose a new “vulnerability” for U.S. special operators. Defense One’s Baron again, from Paris: USSOF are front and center of the battle for Mosul and the coming battle for Raqqa—aaand they’re also in the rear “advising” in pretty much every ISIS battle, by now. But with a flood of reporters and local Kurds and Iraqis on the ground riding along with Mosul operations in the smartphone era, America’s elite fighters have a new problem—staying out of the spotlight. And that’s got senior U.S. commanders concerned. SOF troops are showing up on near real-time video clips across social media, posing a new problem for modern warfare that has commanders worried for their troops’ personal protection, a senior U.S. military official said.

“Social media exposure is one of our new challenges. We know and expect that everybody’s a reporter—that anyone with a camera is a reporter. And obviously the personal identification of special operators is paramount for us to safeguard them. But it’s just something we’re dealing with now, we’re coping with a little more aggressively, acknowledging it’s a vulnerability for us,” said a senior U.S. military official.

Iraqi forces moving on Mosul are having a difficult go of things south of the city. Reuters reports on the tough slog fighting through countless roadside bombs, here.

Iranian Shi’a-led militias, known collectively as Hashid Shaabi or Popular Mobilization, are reportedly moving into position near the city of Tal Afar, some 50 miles west of Mosul, to cut supply routes from Syria.

Dispatch from the ground on the Mosul front: “If the shrapnel had hit just an inch to the left, I could have lost my right hand,” said New York Times photographer Bryan Denton after being injured by the last of four successive suicide attacks last week on the CTS forces he’d embedded with near Bartella, Iraq. “I was in the open for maybe four or five seconds, but that was too long,” he writes. “The explosion was huge, and I felt something hit the top of my right wrist. Somehow there was no pain yet — in the moment I actually thought of a teacher’s ruler smacking my wrist. Hard to explain.” Worth the click, here.

And 40 miles south of Mosul, CENTCOM chief, Gen. Joseph Votel, stopped in on U.S. troops at the Q-West air base on Tuesday, LA Times Bill Hennigan tweeted. Hennigan has a full report on Votel’s recent activity from Riyadh, Saudi Arabia, where he conducted “a series of one-on-one meetings with leading members of the House of Saud royal court, hoping to find common ground and clear up past grievances.” Read that, here.

Echoes of Future War: How the Fight for Mosul Will Change IED Science // Tech Editor Patrick Tucker: Reseachers are using seismic sensors to learn about enemy weapons — and one day, even to find them as they fire.

DHS Is Drawing Up “Strategic Principles” for Internet of Things // Nextgov’s Joseph Marks: The Homeland Security secretary is working with law enforcement and private companies to prevent massive distributed denial of service attacks.

Welcome to Wednesday’s edition of The D Brief by Ben Watson, Bradley Peniston and Kevin Baron. On this day in 1775, Britain’s King George III asked Parliament to authorize a military response to restive American colonists. (Send your friends this link: http://get.defenseone.com/d-brief/. And let us know your news: the-d-brief@defenseone.com.)

Bomber protest denied: Northrop Grumman will build the U.S. Air Force’s next bomber after all. Rival bidder Boeing had contended that the service hadn’t properly weighed the risks of Northrop’s proposal to use lower-paid labor. But the Government Accountability Office, after requesting and receiving clarification from Northrop, rejected that allegation — and further noted that the Air Force had looked approvingly upon the company’s decision to sink more of its own money into research and development. Read on, from FlightGlobal or Bloomberg.

FP: “CyberJunta, the group behind the alleged hack, released email exchanges belonging to Surkov, a scan of passports belonging to Surkov and his family, and 22 pages from documents outlining a plan to support nationalist and separatist politicians and to encourage early parliamentary elections in Ukraine, all with the aim of undermining the government in Kiev.”

Adds the folks at the Atlantic Council’s Digital Forensics Lab: “The Ukrainian Security Service (SBU) stated that the hacks were authentic, but this is hardly a reliable indication.” However, they go on in great detail to say that the leaks very much appear to “show us a picture of the conflict in Eastern Ukraine that we have long suspected: the Kremlin had a guiding hand in orchestrating and funding the supposedly local and independent government.” Catch their exhaustive analysis of the documents—and what makes them so far stand out from possible fakes—here.

The U.S. Army is putting lasers on its Stryker vehicles. Why? To give them the ability to dodge missiles, mortars and artillery, Scout.com reported Tuesday, calling it “the first-ever integration of a laser weapon onto an Army combat vehicle… Concept vehicles are now being engineered and tested at the Army’s Ft. Sill artillery headquarters as a way to quickly develop the weapon for operational service. During a test this past April, the laser weapons successful shot down 21 out of 23 enemy drone targets.” The system could become operational by this time next year. More here.

Happening today in Washington: Plotting the “trajectories, priorities and risks” in India and Pakistan’s military budgets. It’s an event held by the Stimson Center and centering on a new report and “will consist of a panel discussion convened by Michael Krepon and moderated by Sameer Lalwani, with Shuja Nawaz, Nilanthi Samaranayake, and [the report’s author] Shane Mason serving as discussants.” RSVP or catch info on the livestream, which goes live at 12:30 pm ET, here.

Lastly today: A-10 assembly lines are a boomin.’ That’s the word from Popular Mechanics, writing off a report from paywalled Aviation Week.

The lead quote: The A-10s “have re-geared up, we’ve turned on the depot line, we’re building it back up in capacity and supply chain,” AFMC chief Gen. Ellen Pawlikowski told Aviation Week. “Our command, anyway, is approaching this as another airplane that we are sustaining indefinitely.”

Some scene-setting: “Air Force maintainers are also preparing to replace the wings of the A-10 fleet, tapping a $2 billion contract originally awarded to Boeing in 2007, which was intended at the time to keep the fleet flying until 2028. Some corrosion of the planes has been seen at the depots, but Pawlikowski says this is to be expected, especially on an aircraft that has been in service since 1977.”

And some key numbers in this discussion: “In the current struggle against the Islamic State, a heavily armed and armored attack plane with a long loiter time—and the GAU-8 Avenger 30-millimeter gatling gun that holds 1,350 armor-piercing rounds—is significantly more useful than a stealthy, fast, software-laden fighter like the F-35. To keep the A-10 fleet of 283 aircraft flying, Hill Air Force Base in Utah, where most of the A-10 maintenance and repair work is done, is continuing to prepare for increased capacity. According to Aviation Week, the A-10 division at Hill has improved the aircraft availability rate from about 63 to 68 percent in the past year, accounting for 87,000 flight hours worldwide in fiscal year 2015.” Read the rest, here. 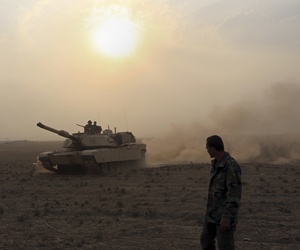 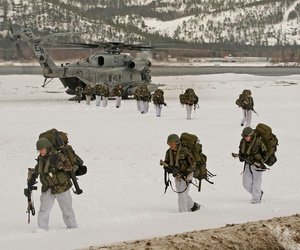 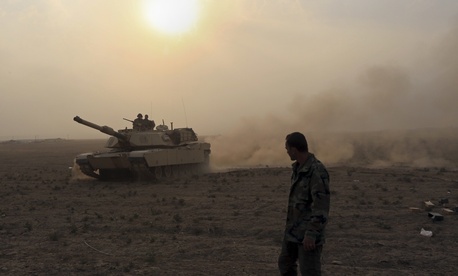 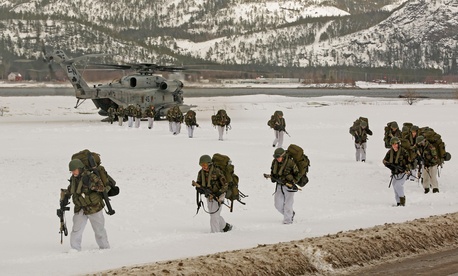