Donald J. Trump is America’s next commander-in-chief. U.S. voters soundly rejected Democratic nominee Hillary Clinton and what was broadly seen as four more years of Obama’s foreign and domestic policy, delivering the Republican businessman a 289-218 electoral college victory overnight. Trump made many campaign promises on national security, and countered himself on some of them. The question is how serious was he on any of them, from bombing “the sh*t out of” ISIS to arming Korea with nuclear weapons, blocking immigration from the Arab-Muslim world or building that border security wall.

Who will lead the Trump war cabinet? And what about those generals? In the coming weeks, Defense One will dive into these and so many other unanswered questions about Trump’s foreign-policy promises — and whether they’ll make it past a GOP Congress, much less offshore.

Up in the air now (among other things): U.S. NATO policy, Stars and Stripes reports. In Brussels, NATO Secretary-General Jens Stoltenberg called a news conference to remind the president-to-be that the U.S. is obligated by treaty to come to its allies’ defense. During the campaign, Trump said blasted “obsolete” NATO and said members that underspend on their militaries might not get U.S. protection, unnerving (in particular) the Baltic nations that watched Russia annex Crimea in 2014. Reuters, here. (And it’s not just them. Another Reuters’ headline: “World in shock as Trump surges to victory in U.S.”)

Speaking of, Vladimir Putin lost no time in declaring himself ready to work with a Trump administration. Putin, via Reuters: “It is not an easy path, but we are ready to do our part and do everything to return Russian and American relations to a stable path of development.”

So who will be on Trump’s national-security team? Citing a trio of unnamed aides, MSNBC reports that frontrunners include Newt Gingrich for secretary of state and Rudy Giuliani for attorney general.

And who will run the Pentagon? Retired Lt. Gen. Mike Flynn, the former DIA chief, is mentioned as a possible defense secretary, but he’d need Congress to intervene because he so recently retired. Perhaps national security adviser? Politico adds other possible SecDefs: Sen. Jeff Sessions, R-Ala., former National Security Adviser Stephen Hadley and former Sen. Jim Talent, R-Mo. But trust us, your guess is as good as theirs.

On the other end of Pennsylvania Avenue, Sen. John McCain, R-Ariz., held onto his seat and his party held onto the Senate, meaning that there will be a familiar face running the Senate Armed Services Committee.

A thought, from the Washington Examiner’s Jamie McIntyre: “The day begins like any other, with the twin American flags flapping at the foot of the River Entrance Parade ground, with the 17½ miles of corridors teeming with some 24,000 uniformed and civilian personnel arriving by the dawn’s early light to carry out the myriad functions that keep our national security apparatus functioning…The Pentagon prides itself on being a planning organization, and today planning will continue on options to present the new president on everything from defeating the Islamic State to countering the Russians in the Arctic.” Read on, here.

Syrian officials in Damascus are more chipper this morning. Various rebels in the country: not so much, Reuters reports. “We must be optimistic, but cautiously optimistic,” Sherif Shehada, an MP, told Reuters in a telephone interview.

The rebel reactions spanned the pessimistic end of the spectrum, including “this is not good for the Syrian issue,” to “America was never honest with us,” to “Trump is like any American president.”

But at least one rebel official wasn’t so dour: “Hadi al-Bahra, former president and current member of the Syrian National Coalition, an opposition political body, told Reuters that potential positive aspects to Trump’s presidency included his opposition to Iranian influence and Iran’s nuclear deal with world powers, and his perceived willingness to work with Russia on the Syrian issue. ‘All these indicators can be built upon to form policies which align with the national aspirations and objectives of the Syrian revolution,’” he said. All that, here.

For what it’s worth: Trump has called the Iranian nuclear agreement a “disaster” and “the worst deal ever negotiated.” He vowed in March that dismantling it would be his “number-one priority.” But, in what will be a difficult task in the days ahead, Trump also said that he would not “rip up” the deal, but would “police that contract so tough they don’t have a chance.” More on the cognitive whiplash on that issue, here.

Back to Syria: Take a ride through Aleppo with The New York Times’ Anne Barnard writes during a trip, she says, “was even more controlled by the government than reporters here usually are. We were herded through quick, planned stops. That allowed for almost no random chats with ordinary people.”

Obama’s Final Arms-Export Tally More than Doubles Bush’s // Marcus Weisgerber and Caroline Houck: Most of the $278 billion in approved sales have gone to Saudi Arabia and other Mideast allies.

The Next President Will Face a Cyber Crisis. Here’s How to Handle It // Nextgov’s Joseph Marks: The next administration should focus on creating serious cyber strategies and templates for action, experts say.

Welcome to the morning after edition of The D Brief by Ben Watson, Bradley Peniston and Kevin Baron. On this day in 1989, the Berlin Wall fell. (Send your friends this link: http://get.defenseone.com/d-brief/. And let us know your news: the-d-brief@defenseone.com.

After a 10-day absence, the Islamic State’s Hisba morality police are back to patrolling the Mosul streets—and back to displaying crucified Iraqis accused of spying for the U.S.-led coalition in public spaces, Reuters reports.

And, “In another sign of a clampdown on contact with the outside world, one retired policeman said Islamic State officials were trying to inspect SIM cards to check on all communications.”

So, why the apparent confidence to roam in public? “The relative quiet may reflect a reduction in fighting since Iraq’s special forces first broke into eastern Mosul a week ago. They faced fierce resistance, and have not sought to any major advance since then.” More here.

For your eyes only: Here’s a pretty informative map of where the lines of the Mosul offensive looked on Election Day.

In Yemen, more than two dozen al-Qaeda fighters were killed in the southern city of Mukalla during “a raid backed by a Saudi-led military coalition,” the Yemeni military said this morning.

In Afghanistan, the Taliban have put out a call for Donald Trump to remove all U.S. troops from the country. Their short statement: “Our message is that the Americans should draft a policy not to take away the independence and sovereignty of other nations. Most importantly they should withdraw all their troops from Afghanistan.”

Happening tomorrow in DC: What’s next for America’s veterans? The Washington Post hosts young veterans at an event Thursday morning at the Post’s building on K Street “to discuss their experiences in Iraq and Afghanistan and their post-war contributions to their jobs, families and communities.”

Lastly today: Did a Canadian diver just find an old American nuke from 1950 off the coast of British Columbia? It’s looking that way, Air Force Times writes off a recent report from The Vancouver Sun.

AFT: “Diver Sean Smyrichinsky told the Vancouver Sun that he spotted something unusual off Pitt Island in the Haida Gwaii archipelago, describing the find to his friends as a ‘UFO.’”

The Sun picks up the story: “‘Nobody had ever seen it before or heard of it, (because) nobody ever dives there,’ Smyrichinsky said. ‘Then some old-timer said ‘Oh, you might have found that bomb.’ ‘That bomb’ was a nuclear device that was dumped or exploded off the B.C. coast on Feb. 13, 1950, when an American B-36 bomber crashed while en route from Alaska to Texas. It was packed with lead – not plutonium – and TNT. Five crew members died but 12 were rescued after they parachuted onto Princess Royal Island, about 200 km south of Prince Rupert. They were forced to abandon the plane after ice built up on its wings and three of its six engines caught fire.” The remarkable story continues here. 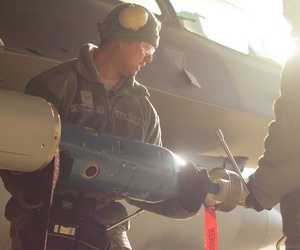 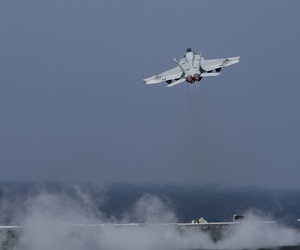 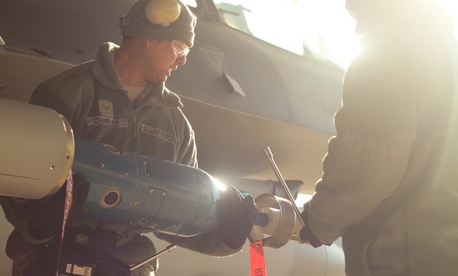 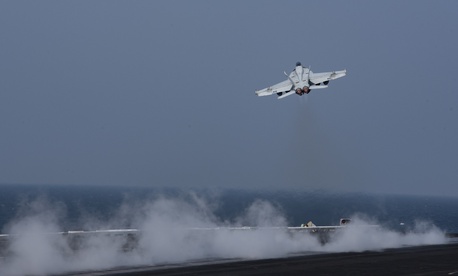