Obama’s last order: U.S. troops finally allowed to fight on Iraqi front, we’ve learned overnight. “The United States has adjusted its rules of engagement as American and other international troops are now closer to front-line fighting than before,” AP reports this morning south of Mosul.

And the why: “Two months into the campaign to retake Iraq’s second-largest city from IS control, Iraqi forces appeared bogged down by weeks of grueling urban combat. Some front lines went stagnant for weeks and Iraqi forces were suffering relatively high casualty rates under fierce IS counterattacks.”

About that “last order” from Obama: “On Dec. 26, U.S. Army Lt. Gen. Stephen Townsend issued a tactical directive sending more coalition troops away from the safety of their outposts, deeper into Mosul and closer to front lines to work side by side with their Iraqi counterparts,” writes AP. “In January, the Pentagon first confirmed that U.S. forces were at times operating inside the city of Mosul.” Read the rest, here.

So that’s one escalation of U.S. involvement in a fight the new president, Donald Trump, wants to end quickly. What are his other options, due from Defense Secretary James Mattis next week? Send more troops to Syria; free up commanders to send more troops and equipment to an intended location faster; arm the Syrian Kurds; and/or raise the tolerance for civilian deaths from airstrikes, The Wall Street Journal reported Thursday.

ICYMI (for the last 14 years): The U.S. military is considering a “long-term” commitment to Iraq, Joint Chiefs Chairman Gen. Joseph Dunford said at a Brookings appearance in Washington on Thursday. Dunford said the forthcoming plan will include action items across government agencies, not just for the military, to address violent extremism beyond just Iraq and Syria — and cautioned reporters not to expect significant troop-number proposal, a la Gen. Stan McChrystal’s memorable war plan for Afghanistan he delivered to Obama. CNN has more, here.

Coalition troops are fighting ISIS in west Mosul neighborhoods for the first time today after punching through the group’s defenses at the city’s airport late Thursday, retaking what remained by early morning, AP reports. And what remains isn’t a lot: “No terminal building, no control tower… Mosul airport has been flattened,” the BBC’s Quentin Sommerville tweeted alongside Iraqi forces at dawn.

The ISF had to bust out the armored earthmovers to break through ISIS defenses on the other side of the airport, a task performed under sniper fire. Iraqi troops have also seen an uptick in car bombs and ISIS UAVs, Iraqi special forces Maj. Gen. Sami al-Aridi told Reuters, saying this morning, “The drones are particularly annoying today.”

And the Ghozlani army base is also now under Iraqi control after special forces broke ISIS grip Thursday. But sniper threat remains constant there, too, as the L.A. Times’ Nabih Bulos reported troops warning against standing atop humvees.

Here’s one way the U.S. military says it could come together with the Russians: have more talks about deconflicting Syrian airspace—a task that’s so far turned out to be easier said than done, the Washington Post reported Thursday.

Did someone say Russia: Remember the allegations of Russian interference in the election? The NSA’s Adm. Mike Rogers said, “We have been very public – particularly if I put on my NSA hat – in categorizing the behaviors we saw, from a cyber perspective, the Russians engaged in terms of our election process. We were very confident that, ‘hey, this happened,’” he told a crowd at the West 2017 conference in San Diego. The question from here, he said, is, “What does that mean?” And for him, it means “we need to rethink what critical infrastructure means in the digital age.” That includes not just “air traffic, pipelines, the financial world,” but now perhaps ought to include “information, data and fundamental processes like the ability to ensure high confidence that in a Western democracy the electoral outcome is actually reflective of the majority of our citizens.” Read the rest over at US Naval Institute news, here.

President Trump and the nukes. The president says he doesn’t like nuclear weapons, but since the U.S. has “fallen behind” on the production of nuclear weapons, he wants to have the most nuclear weapons on the planet—or, in his words, to be “top of the pack”—he told Reuters in an interview published Thursday. The interview lightly touched on a number of topics—China, North Korea, the EU, NATO, but not getting into much depth on any.

Notes Reuters: “Russia has 7,000 warheads and the United States, 6,800, according to the Ploughshares Fund, an anti-nuclear group.” Read more here, or listen to audio of the interview, here.

On topic: “Reviving Cold War Doomsday Devices Could Patch America’s Broken Nuclear Controls,” Elaine Grossman reports in the last of her three-part series “on how limited foreign attacks could endanger America’s fragile command and control over nuclear weapons,” published over at War Is Boring this week.

How Trump Could Advance Federal Cybersecurity // John Kamensky: The administration doesn’t need to start from scratch.

The Foreign-Policy Establishment Defends Itself From Trump // Uri Friedman: ‘The question confronting us as a nation is as consequential as any we have faced since the late 1940s,’ a group of Republican and Democratic experts write.

I Was a Muslim in Trump’s White House—and I Lasted Eight Days // Rumana Ahmed: When President Obama left, I stayed on at the National Security Council in order to serve my country.

Welcome to Friday’s edition of The D Brief by Ben Watson and Kevin Baron. (Got a tip? Let us know by clicking this link to email us: the-d-brief@defenseone.com.)

What’s going on in Poland? “Almost all of Poland’s military leadership is replaced after hundreds of officers leave,” Bloomberg reported Thursday in a bitter case of domestic politics. “With the government moving to rid institutions of officials appointed by the former ruling Civic Platform party, which it defeated in 2015 elections, 90 percent of the General Staff leadership and more than 80 percent of the army’s top brass have gone, according to the Defense Ministry. They include Chief of Staff General Miroslaw Gocul, who stepped down last month, and Army Commander General Miroslaw Rozanski.”

For the record: “Among the departures are 26 generals and more than 250 colonels, about a quarter and a sixth of the army’s total, TVN24 television reported. While media say the departures are higher than compared with previous years, the Defense Ministry says the total size of the army increased to 106,000 in 2017 from 96,000 in 2015.” More here.

Elsewhere in Europe, Germany will grow its military to 200,000—but don’t get too unnerved, writes Foreign Policy’s Robbie Gramer: The move will “increase the military’s roster of professional soldiers from the current level of 178,000 to 198,000,” but not until 2025. “At its height during the Cold War, the West German military swelled to a size of over 500,000, and was a central part of NATO’s plan to defend Europe against a Soviet armored incursion. Since the end of the Cold War, its size sharply declined, hitting a low of 166,500 in 2015.” Read the rest, here.

VX killed him. “The poison used to kill Kim Jong-nam, the half brother of the North Korean leader Kim Jong-un, was VX nerve agent, which is listed as a chemical weapon, the Malaysian police announced Friday,” The New York Times reports. “The announcement by Malaysia’s police chief came just a day after North Korea denied any responsibility for Mr. Kim’s death, accusing the Malaysian authorities of fabricating evidence of Pyongyang’s involvement under the influence of South Korea….South Korea has suggested that the killing was the work of the North Korean government. The revelation that a banned weapon was used in such a high-profile killing raises the stakes over how Malaysia and the international community will respond.”

What to know about VX: It “can be delivered in two compounds that are mixed at the last moment to create a lethal dose.”

It’s also “part of a family of nerve agents created decades ago during research into pesticides. It is tasteless and odorless and kills by causing uncontrollable muscle contractions, which eventually stop the victim from breathing. A dose of about 10 milligrams is enough to kill by skin contact…Several world powers, including the United States and the former Soviet Union, once had large stockpiles of the nerve agent. American stores of VX were destroyed under the Chemical Weapons Convention of 1997, with incineration completed in 2012.”

Here’s a handy chart with all the basics, via AFP. Read more here.

Pakistan just launched its first “nationwide anti-terror operation,” WaPo reported Thursday. “After years of appeasing certain Islamist militant groups for political and religious reasons, the government has reluctantly agreed to allow the armed forces to enter Punjab province, authorized with special powers to hunt down, arrest and shoot suspected militants. Punjab is the political stronghold of Prime Minister Nawaz Sharif and his ruling party, the Pakistan Muslim League-N. It is also the home of a variety of Islamist groups, including mainstream religious parties, sectarian movements officially banned for their violent methods, and anti-India militants who have been accused of a 2008 terrorist siege in Mumbai.”

What’s happened so far: “The military embarked on a series of raids and arrests last weekend. Swooping into suspected militant hideouts and supportive communities, from Karachi in the south to border tribal areas in the north, the military claimed to have killed more than 100 terrorism suspects in three days. But they did not touch Punjab.” WaPo’s Pamela Constable explains possible reasons why, reporting from Islamabad, here.

Said Air Force spox, Col. Pat Ryder: “To my knowledge I have not been told that we have that information. I refer you to the White House.” Bloomberg writes the White House did not respond to requests for comment. Story here.

POTUS: “We’re getting really bad dudes out of this country. And at a rate nobody has ever seen before. And they’re the bad ones. And it’s a military operation.”

There’s just one particularly big problem with that, according to Homeland Security Secretary John Kelly: “There will be no, no use of military force in immigration,” he said from Mexico City just a short while later. Writes The Hill: “Using the military to apprehend people living illegally in the interior of the country would be highly unusual — and possibly a violation of U.S. law.” More, here. 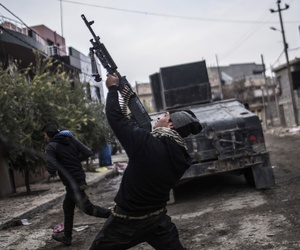 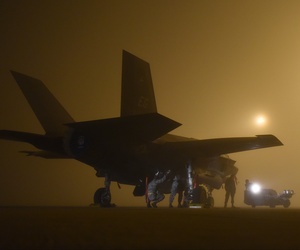 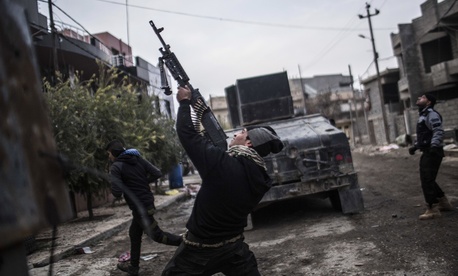 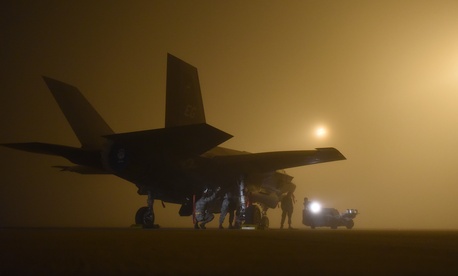