The U.S. policy of “strategic patience” with North Korea “is over,” State Secretary Rex Tillerson said this morning in Seoul. “Tillerson ruled out on Friday opening any negotiation with North Korea to freeze its nuclear and missile programs and said for the first time that the Trump administration might be forced to take pre-emptive action ‘if they elevate the threat of their weapons program’ to an unacceptable level,” The New York Times reports from South Korea.

Tillerson: “Let me be very clear: the policy of strategic patience has ended. We are exploring a new range of security and diplomatic measures. All options are on the table,” he said. “Certainly we do not want … for things to get to military conflict,” but “if they elevate the threat of their weapons program to a level that we believe requires action, then that option’s on the table.”

What other options are on the table? “Tillerson referred vaguely to a ‘number of steps’ the United States could take — a phrase that seemed to embrace much more vigorous enforcement of sanctions, ramping up missile defenses, cutting off North Korea’s oil, intensifying the cyberwar program and striking the North’s known missile sites,” the Times reports. But, “At a meeting of the ‘principals committee’ of the National Security Council on Monday, any discussion of military action was kicked down the road.”

Jeffrey Lewis, who tweets @ArmsControlWonk, was not impressed with Tillerson’s initial foray into Korean diplomacy, tweeting out reminders that George H.W. Bush and Barack Obama had also sought new approaches, and  offering “Your periodic reminder from [Pyongyang’s state-run news agency] KCNA that North Korea plans to go nuclear on day one of a war on the Korean peninsula.” Click through for that warning, here.

Stars and Stripes reports the Korea stop “was the second stop on Tillerson’s debut trip to Asia as secretary of state. He arrived earlier Friday from Japan and planned to travel to China on Saturday,” where the U.S. anti-missile system, THAAD—newly arrived to South Korea—has upset officials in Beijing. More here.

Meanwhile in the Japanese fishing town of Oga (map, here), “Sirens blared and loudspeakers broadcast warnings in Japan’s first civilian missile evacuation drill on Friday, conducted in a fishing town by officials wary about the threat of North Korean missiles,” Reuters reports from the city. “Friday’s drill played out a scenario in which North Korea had fired a ballistic missile on the Japanese islands. ‘The missile is seen to have landed within a 20-km (12-mile) boundary west of the Oga peninsula,’ a speaker blared during the evacuation. ‘The government is currently examining the damage.’”

Said one resident: “If it did actually happen, I don’t think we can do what we practiced today. We’ll just be panicked.” More here.

Get “Foreign Military Sales Under the Trump Administration,” a new ebook from Defense One. During the eight years of the Obama administration, the defense industry’s requests to export weapons were approved at a record clip. Now companies are waiting to see how Donald Trump will do business. Download the ebook, here.

A Bigger Military Won’t Necessarily Make the US Stronger or Safer // CSIS’ Todd Harrison: The Pentagon can’t properly train and support the people and weapons it already has. Simply adding more won’t solve the problem — and could undermine long-term readiness.

Welcome to the St. Patrick’s Day edition of The D Brief by Ben Watson and Bradley Peniston. #OTD1776: British forces pull out of Boston after George Washington brings captured artillery to the fight. (Got a tip? Let us know by clicking this link to email us: the-d-brief@defenseone.com.)

Two big strikes in Syria: Coalition jets hit a mosque near Aleppo, killing nearly 50 on Thursday, Airwars’ Samuel Oakford reported after fragments of a U.S. bomb were discovered in the vicinity of the strike.

What happened: “Airwars was initially told by US Central Command (CENTCOM) that a strike was carried out late on March 16th, but in Idlib governorate. That is where the bulk of US strikes against alleged al Qaeda-linked targets have taken place since 2014…However, a US official later clarified that the US raid in fact took place in the vicnity of al-Jinah village, which is located in western Aleppo governorate, just a few kilometers from the border with Idlib. CENTCOM spokesperson Maj. Josh Jacques said the target was ‘assessed to be a meeting place for al Qaeda, and we took the strike. It happened to be across the street from where there is a mosque.’”

Added another CENTCOM spox, Col. John Thomas, to AFP: “We did not target a mosque, but the building that we did target—which was where the meeting took place—is about 50 feet (15 metres) from a mosque that is still standing.”

Video of the aftermath surfaced on social media shortly after the strike, driving open-source investigators like Bellingcat’s Christiaan Triebert to dig. His digging helped prompt the answer from CENTCOM, Oakford writes.

A grim scene: “Much of the building, identified by a black placard outside as a mosque, had been flattened,” AFP reports. “The empty prayer hall was covered in debris, and rescue workers stepped through it carefully, deliberating how to break down a wall to search for more survivors. Rescuers had earlier left the wreckage site but were forced to double back when they heard moaning coming from the rubble.”

Here’s Reuters with a bit more on the surrounding area: “Al-Jina is located in one of the main rebel-held parts of Syria, the northwest that includes Idlib province and the western parts of Aleppo province, and its population has been swollen by refugees…Rebels in northwest Syria fighting to oust President Bashar al-Assad also include groups supported by Turkey, the United States and Gulf monarchies.” Read on, here.

We turn now to Defense News’ Barbara Opall-Rome, who fills us in on the key details: “What is known of this unusual story is this: Israel’s Super Green Pine radar — part of the joint U.S.-Israel Arrow weapon system — detected a threat and launched an Arrow 2 interceptor against its first operational target. Evidence of this is clear from the Israeli Home Front alarm sounded throughout the southern environs of Jerusalem and the Jordan Valley; as well as pieces of the Arrow 2 rocket engine found and photographed in Jordan.”

But there’s more: “From an official Israel Defense Forces statement released early March 17, we know that the Israeli Air Force targeted “several targets in Syria” and that, following the mission, ‘several antiaircraft missiles were launched from Syria.’ The IDF reported that its ‘aerial defense systems intercepted one of the missiles’ and stressed that ‘at no point was the safety of Israeli civilians or aircraft compromised.’”

What makes this all additionally unusual, she writes, is that “a matter of policy, the IDF has not publicized the periodic strikes it carries out in Syria to prevent high-value weaponry from crossing the border into Lebanon for Hezbollah’s possible future use against Israel.”

Now about that Syrian air defense system: “Israeli media are reporting that the Arrow intercepted an SA-5 surface-to-air missile, or SAM, and indeed it is logical that Syria’s air defense system launched against the intruding Israeli fighters in an attempt to down the planes. But given that the Israeli attack was hundreds of kilometers away from Israeli territory, why would Israel launch Arrow, which is intended to defend the homeland?”

The problem with all that: “Arrow is not designed to intercept SAMs. Such anti-air missiles are not part of the system’s database, which automatically tracks trajectories and predicts impact points of incoming ballistic missiles. Once fired, an SA-5 with its four strap-on boosters create five targets in the air, all of which appear as tumbling objects whose trajectories — unlike those of ballistic missiles — are practically impossible to predict. And even if the Arrow system’s early warning and tracking radar mistook fragments of the SAM as a ballistic target, where is the debris, experts here are asking?”

Opall-Rome lays out a “more likely scenario,” with input from Israeli experts, here. Or read more from AP, here.

Some breezy weekend reading: What does the Six-Day War have to do with the F-35? In short, air supremacy, writes former U.S. Air Force B-1B pilot and Air Force Attaché to the U.S. Embassy in Tel Aviv, John Cappello, over at Militaryedge.com.

Mosul update: The U.S. military is a bit more cautious about how it portrays the recent gains made in the ISIS-held city, AP reported Thursday from an offensive that has stalled somewhat as the terrorist group makes its last stand in the city of 1.5 million. AP: “Maj. Gen. Joseph Martin, the American commander of coalition ground forces in Iraq, said the troops had recaptured ‘a little over a third’ of neighborhoods west of the Tigris River, while Brig. Gen. Yahya Rasool, an Iraqi military spokesman, said they had retaken up to 60 percent, with fighting still underway.”

The threat from car bombs—even construction-equipment suicide car bombs—remains, writes AP: “A suicide attacker driving a bulldozer rigged with explosives plowed through the Federal Police’s front line on Wednesday, killing more than 10 soldiers and wounding several others, according to a Federal Police medic.”

For what it’s worth: Coalition airstrikes alone have hit 42 vehicle-borne IEDs in Mosul since March 1—the highest per-month total since the offensive began back in October…and March is only halfway finished.

In case you were curious: the coalition is averaging 6.1 strikes per day in the vicinity of Mosul for the month of March. The highest per day month of the offensive: February (6.5), then November (6.2). Defense One will have a more exhaustive analysis of the Mosul offensive soon, so stay tuned.

Someone’s attack helicopter just killed nearly three dozen Somali refugees—including women and children—off Yemen’s coast, Reuters and AFP report. “The rebel-controlled Saba agency accused the Saudi-led coalition battling the insurgents of attacking the refugees from the air but did not provide further details. There was no immediate comment from the coalition, which has been backing pro-government forces waging an offensive from the south to retake Yemen’s Red Sea coast from Huthi forces.”

Reuters: “A sailor who had been operating the boat, Ibrahim Ali Zeyad, said 80 refugees had been rescued. The spokesman for the International Organization for Migration (IOM) told a media briefing in Geneva the number of deaths may be more than 31.” More here.

U.S. formally apologizes to Britain after White House accuses its spies of wiretapping Trump. The Independent: “Sean Spicer, Mr Trump’s press secretary, repeated a claim on Thursday evening – initially made by an analyst on Fox News — that GCHQ was used by Mr Obama to spy on Trump Tower in the lead-up to last November’s election. The comments prompted a furious response from GCHQ, which in a break from normal practice issued a public statement.” The apologies were made by Defense Secretary Jim Mattis to his UK counterpart and by Spicer through the U.S. ambassador. Read more, here.

Lastly this week: An unnamed U.S. ally shot down a cheapo quadcopter with a $3 million Patriot missile, the BBC reported Thursday. “That quadcopter that cost 200 bucks from Amazon.com did not stand a chance against a Patriot,” U.S. Army TRADOC’s Gen. David Perkins quipped at the recent AUSA 2017 symposium.

Admitted Perkins: “I’m not sure that’s a good economic exchange ratio…In fact, if I’m the enemy, I’m thinking, ‘Hey, I’m just gonna get on eBay and buy as many of these $300 quadcopters as I can and expend all the Patriot missiles out there.’” Read on, here; or watch Perkins’ chat over on YouTube, here. Have a great weekend, everyone. We’ll see see you again on Monday. 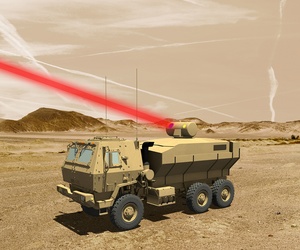 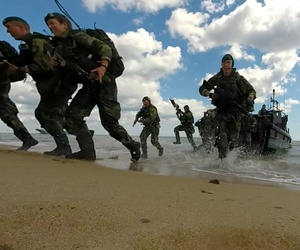 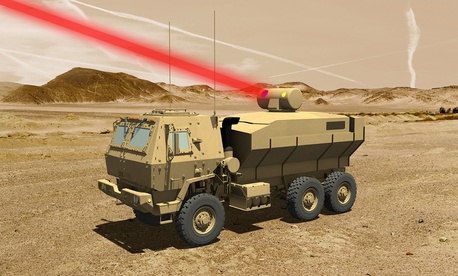 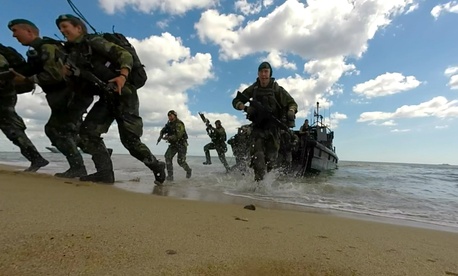