How long should US stay in Iraq?; In Syria, USAF digs in; Deadly blast in Russian subway; Livestream: Day 2 of #SAS2017; and just a bit more…

Should the U.S. leave troops in Iraq after the fight against the Islamic State group? That’s at least part of what Jared Kushner reportedly sought to discover in his trip with Joint Chiefs Chairman, Gen. Joseph Dunford, to Baghdad on Monday, the New York Times reports. Also tagging along: Thomas Bossert, President Trump’s homeland security adviser.

How Kushner could benefit the boss: “With administration officials having signaled a desire to take a tougher stance on Iran, which like Iraq is majority Shiite and whose power inside Iraq is paramount, Iraqi officials have worried that their country could again become a place for the two foreign powers to settle their differences…There are already signs that the Trump administration sees Iraq as a place to push back on the growing power of Iran across the region, where Tehran has expanded its power through proxies in four countries: Iraq, Syria, Lebanon and Yemen.” More here.

One important message that came out of Iraq on Monday: the deadly March 17 blast in West Mosul’s al Jadadi district—was it a coalition airstrike, an ISIS bomb of some kind, or some combination of the two?—Iraqi officials said investigators have found no holes in what remains of the roof of the structure…so that leaves an ISIS car bomb as the culprit. That according to this DoD release from Dunford’s Monday stop in Baghdad.

The case presented there: “Iraqi forces were coming under strong fire from a building and they properly identified the source of the fire and called for an airstrike. Next to it was another house and between them was a vehicle. The strike came in and hit the target, but it also set off the bomb-laden vehicle. The ISIS bomb was packed with explosives and took out the whole block, said Iraqi Air Force Brig. Gen. Tahseen Ibrahim, a defense ministry spokesman. He said the size of the weapon the aircraft dropped could not have caused the kind of damage Iraqi troops found at the site.” More here.

Meantime, the number of displaced from the Mosul offensive has risen to 300,000—which is still a far cry from initial estimates before the operation got underway in October. But don’t think for a minute that means Iraq’s infrastructure was actually prepared for the large number of wounded that have come from operations over the last six months. More from the Associated Press, here.

In north-central Syria, the U.S. Air Force is expanding an airfield for escalated operations against ISIS, Stars and Stripes reported Monday.

Syrians’ exodus from Raqqa continues “under cover of night as U.S.-backed forces close in on the Islamic State stronghold, running a gauntlet of minefields and hostile fighters instead of risking death in a major battle expected to begin soon,” Reuters reports.

The number of ISIS checkpoints around Raqqa seems to be diminishing, too, Reuters writes. And ISIS has reportedly taken to asking children—rather than their parents—where folks are going when they do pass through ISIS checkpoints. As well, “Residents say Islamic State military positions including weapons stores have been placed near civilian buildings, including a bakery that was hit in recent weeks. Prices are meanwhile sky-rocketing due to an ever tightening siege. Bridges across the Euphrates River, which borders Raqqa to the south, have all been destroyed. Produce is brought across the river by boat, and costs four times what it used to.” More from the scene, here.

Another suspected gas attack in Syria, this time in the rebel-held northern Idlib province, killing more than four dozen and wounding some 300, AP reports. “The Britain-based Syrian Observatory for Human Rights monitoring group put the death toll from the gas attack at 58, saying there were 11 children among the dead. Meanwhile, the Idlib Media Center said dozens of people had been killed.”

The airstrikes hit the town of Khan Sheikhoun, and also wounded more than 60, Reuters adds. If the attack—which is believed to have been either sarin or chlorine—is confirmed, “It would mark the deadliest chemical attack in Syria since sarin gas killed hundreds of civilians in Ghouta near Damascus in August 2013.”

For what it’s worth, the Syrian military this morning (as before) denied its involvement in any such chemical weapons attacks. More here.

Egypt and America Are Destined to Disappoint Each Other // Andrew Exum, via The Atlantic: Abdel Fattah al-Sisi’s supporters in Washington are about to get mugged by reality: His regime is alarmingly weak.

WATCH: Day Two of Navy League’s Sea-Air-Space Exposition 2017 // Defense One Staff: Join us as we livestream this year’s conference and panel discussions, featuring more than 150 speakers from across the U.S. military and private sector.

Connecticut Police May Soon Hunt Perps with Lethal Drones // Hanna Kozlowska, via Quartz: A new bill under consideration forbids civilians from outfitting drones with weapons but includes a crucial exemption for police.

A Bad Time for a Trump-China Summit // Hochang Song, via the Council on Foreign Relations: A former South Korean lawmaker says the White House needs to strengthen its relationship with Seoul before deciding to grant the same level of respect to Beijing.

Welcome to this Tuesday edition of The D Brief by Ben Watson and Bradley Peniston. Got a message for us? Let us know by clicking this link to email: the-d-brief@defenseone.com.

Deadly explosion in a Russian subway. A bomb detonated on a St. Petersburg metro car between stations Monday, killing 14 and wounding another 50. The attack was “probably” carried out by a suicide bomber from Kygyzstan with ties to radical Islamists, unnamed law-enforcement officials told Russian news agencies. Reuters: “Russia has been on alert against attacks on its soil in reprisal for its military intervention in Syria, where Moscow’s forces have been supporting troops loyal to President Bashar al-Assad. The Islamic State group has repeatedly threatened revenge attacks.” Read on, here.

Lithuania: Russia can invade us within 24 hours. The annual threat report by Vilnius’ intelligence service says Moscow has enlarged and improved its military forces near the Baltic nations, reducing the time it needs to strike — and making it necessary to send larger NATO deployments to the region, Reuters reports. “Russia is monitoring and suppressing radio frequencies used by NATO pilots over the Baltic Sea and is using commercial and scientific ships for surveillance, the report said…Intelligence officers said disinformation aimed at discrediting NATO soldiers stationed in Lithuania, such as a recent false report of a rape by German soldiers, was likely to persist.” Read more, including Russia’s official denial, here.

“Hand-to-hand combat” in cyberspace is how a NSA official recently described the November 2014 intrusion into U.S. government computers. Tipped off by their own hacks into Russian surveillance cameras, top U.S. cyber defenders spent 24 action-packed hours “engaged in a pitched battle with Russian hackers who had breached the unclassified State Department computer system and displayed an unprecedented level of aggression that experts warn is likely to be turned against the private sector.” Read, here.

That unit will have this to chew on: “Blackwater founder held secret Seychelles meeting to establish Trump-Putin back channel,” the Washington Post reports.

How an online ad for lithium pointed intelligence agencies around the world toward North Korea. It’s an incredible story from The New York Times’ David Sanger and William J. Broad. Why did the ad raise eyebrows? “Lithium 6 offers a fast way to turn an ordinary atom bomb into a hydrogen bomb, magnifying its destructive power by up to 1,000 times. The seller listed in the ad — who even provided his cellphone number — was identified in a recent United Nations report as the third secretary in the North Korean Embassy in Beijing.”

Sanger and Broad write that the excess lithium sale may have been placed because “North Korea has produced so much of the precious material that it is too late to prevent the nation from becoming an advanced nuclear power. If that is the case, Mr. Trump may find little success in borrowing from the playbook of the four presidents before him, who fruitlessly tried, with differing mixes of negotiations, sanctions, sabotage and threats of unilateral strikes, to force the North to give up its program.” More here.

Number of the day: President Trump has now bombed Yemen once for each day he’s been president (74), Micah Zenko of the Council on Foreign Relations said Monday. What he was reacting to: the Pentagon’s announcement that it carried out 20 more airstrikes against al-Qaeda in the Arabian Peninsula in Yemen since the middle of last week. Zenko has more to say about Trump’s rhetoric vs. reality when it comes to the Yemen conflict, here.

In case you were wondering: AQAP is believed to have some 4,000 members located primarily in the country’s “Abyan, Bayda and Shabwah governances in the center of southern Yemen,” Stripes reported Monday, citing defense officials’ estimates. A little bit more, here.

Piracy is back again off the coast of Somalia, this time hijacking an Indian vessel. Reuters: “United Kingdom Maritime Trade Operations (UKMTO), which coordinates shipping in the Gulf of Aden area, said it had received information that a dhow had been hijacked ‘in the vicinity of Socotra (Island).’ It named the vessel as Al Kausar and said it had been en route from Dubai to the port of Bosasso in northern Somalia’s semi-autonomous Puntland region. The EU naval force which patrols off Somalia’s coast as part of an international anti-piracy operation said on Monday afternoon the dhow had been spotted further south, off the Somali port of Hobyo.” Story here.

And now for a slight change of pace: See what the world will look like in 2045, according to DARPA and a fun 57-second video from the World Economic Forum. Some pullouts: We’ll control gadgets with brain signals; artificial intelligence will control passenger planes from take-off to landing; buildings will be incredibly strong and ultra-light; and we will talk to machines that learn and understand language (don’t we already?). More here.

Today at the Stimson Center: Ambassador Richard Olson, former U.S. Special Representative for Afghanistan and Pakistan, will speak at Stimson today about American strategy and policy options in Afghanistan. The event gets underway just after noon. Details, here. 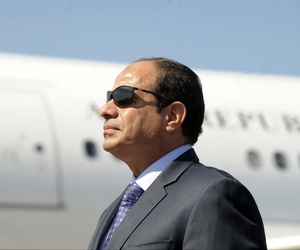 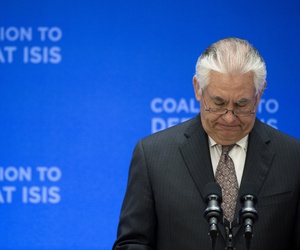 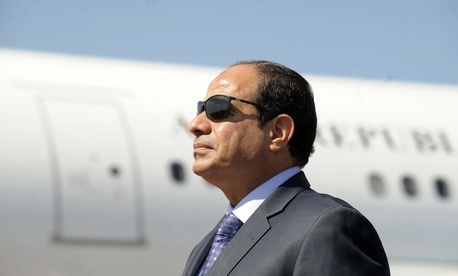 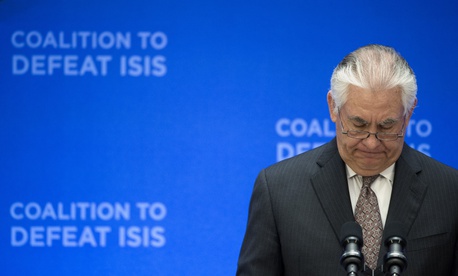