Happening now: The 2017 Defense One Tech Summit is under way, featuring top technical thinkers in government, academia, Silicon Valley and beyond, discussing how the innovative tech of today will become the game-winning resources of tomorrow. If you can’t be at the Newseum in Washington, D.C., watch the livestream, here.

SPECIAL REPORT: How The Military Is Altering the Limits of Human Performance, by Defense One Tech Editor Patrick Tucker. New and emerging breakthroughs in biometric science mean America’s future soldiers will fight with weapons that understand them — inside and out.

What does this mean? “The very experience of flying the plane, analyzing satellite images, even firing a gun could change depending on what the weapon, vehicle, or software detects about the person to whom the weapon is bound,” Tucker reports. “To make this dream real, Pentagon-backed researchers are designing an entirely new generation of wearable health monitors that make Silicon Valley’s best consumer fitness gear look quaint. They’re discovering how to detect incredibly slight changes in focus, alertness, health, and stress — and to convey those signals to machines.”

There are applications for virtually all service branches, Tucker writes. That involves helmets for the Air Force; exo-suits for Army Rangers and Navy SEALs, and a lot more. Read his report in full, here.

The US Must Rethink How It Uses Special Operators, Says Incoming SOLIC Secretary // Caroline Houck: Strained by war, the military’s elite units can’t grow any faster nor deploy slower. Something in their mission set must give.

Welcome to Thursday’s edition of The D Brief by Ben Watson and Bradley Peniston. Have something you want to share? Email us at the-d-brief@defenseone.com. (And if you’re reading this on our website, consider subscribing. It’s free.)

ISIS fighters are still putting up resistance in portions of West Mosul, Reuters reported Wednesday. “Iraqi forces exchanged gunfire with the militants in their final Mosul redoubt just before midnight and through the day on Wednesday, three residents living just across the Tigris River from the area told Reuters. Army helicopters strafed the Old City and columns of smoke rose into the air, though it was unclear if these came from controlled explosions or bombs set off by Islamic State, the residents said by phone.” More here.

How ISIS is spinning the loss of Mosul: “No longer will it be a paragon of jihadist governance. Instead, it will be a prototype for insurgency,” Rita Katz, a terrorism analyst and co-founder of the Search International Terrorist Entities (SITE) Intelligence Group, told the Washington Post on Wednesday. “ISIS will continue to propagandize through Mosul and, provided it can use it as a baton of instability with which to hit the Iraqi government (and the rest of the world too), the self-proclaimed caliphate is not going anywhere anytime soon.” Story here.

America’s big takeaway from the Mosul offensive: “the United States can succeed militarily in the Middle East if — and probably only if — it works with local forces who are prepared to do the fighting and dying,” the Washington Post’s David Ignatius wrote Tuesday. While “The overall human toll has been horrific, even if Americans haven’t been paying the price,” he writes. “Amazingly, over the past three years, just five Americans have been killed in action in Syria and Iraq, according to the U.S. military.” Worth the click, here.

Additional reading: Absorbing lessons of the ISIS war for tomorrow’s operations. This take comes to us via the Atlantic Council’s Aaron Stein, who breaks down America’s experiences to date inside Syria — including the ill-fated train-and-equip program for Syria’s rebels, and the seemingly largely successful partnership with many Kurdish elements of the Syrian Democratic Forces.

His BLUF: “the United States sits at the center of a web of alliances that, collectively, contributes to US power around the world. Policy makers must learn lessons from the Syrian conflict and recognize the challenges posed by the American way of war in wars of choice.” Read Stein’s full analysis (PDF), here.

Did the Russians “sucker” Trump into giving Iran an upper hand in Syria? The Middle East Institute’s Charles Lister argues “yes” in this take in The Daily Beast. He brings four points of clarity to discussions of U.S. forces in Syria, and they are: “First, by limiting its actions to counterterrorism, the United States continues to treat illogically a symptom of a crisis, while allowing its root cause (the Assad regime) to survive… Second, the U.S. does not look set to invest in long-term stabilization efforts in territories captured from ISIS… Third, beyond the fight against the Islamic State, the U.S. looks set to lend its support—publicly or not—to Russia’s de-escalation zone initiative in Syria… Fourth, a limited counterterrorism strategy paired with a tacit admission of Assad’s victory means Iran has won a huge strategic victory.” Lister elaborates on all those points, here.

One particularly good sign out of the Raqqa offensive: the UN “is using newly opened land routes in Syria to expand food deliveries to areas around the northern city,” AP reported Wednesday from Beirut. “The new access has allowed the World Food Program to deliver food to rural areas north of the city for the first time in three years… As the map of control changes, so is the access and WFP said it is now delivering food every month to nearly 200,000 people in eight hard-to-reach locations inside Raqqa province as well as other areas in a neighboring province. Prior to the re-opening of the road linking Aleppo in the west to Hasakeh in the east, the WFP relied on airlifts.” More here.

Libya’s untamed south is turning out to be a worrisome refuge for “hundreds of militants, including Islamic State fighters” who have been pushed out of the country’s coastal regions, the Associated Press reports from Benghazi.

Where to watch: “Libya’s remote stretches near the borders with Egypt, Sudan, Chad, Algeria, Niger and Tunisia.”

And what lies ahead: “IS remnants will likely try to influence and win over groups opposed to Gen. Khalifa Hifter, the Egyptian-backed commander of Libya’s national army who has been fighting militants,” explained Claudia Gazzini, senior Libya analyst for the International Crisis Group. “We are already seeing signs that this may have already happened,” she said.

We turn briefly to the Philippines now, where Manila’s security forces have been fighting ISIS affiliates in the southern city of Marawi for about a month and a half. On Wednesday, “A Philippine government air strike aimed at Islamist rebels mistakenly killed two soldiers,” Reuters reported from the capital. “President Rodrigo Duterte said on Tuesday he needed 15 more days to defeat the militants. More than 500 people have been killed, including 389 militants, 90 members of the security forces, and 39 civilians, since the fighting erupted. About 260,000 residents have been displaced.” More here.

Back stateside, investigators are still probing that deadly KC-130T crash in Mississippi on Monday that killed 16 service members. What they’re closing in on: “indications [that] something went wrong at cruise altitude,” according to Brig. Gen. Bradley S. James, commander of the Fourth Marine Aircraft Wing, Marine Forces Reserve. The scene of the accident revealed “a large debris pattern,” James said to reporters Wednesday. The New York Times has a tiny bit more on what’s known presently, here.

Lastly today: Count Defense Secretary Jim Mattis among those opposed to creating a new Space Corps, The Hill reported Wednesday. “I believe it is premature at add additional organization and administrative tail to the department at a time I am trying to reduce overhead,” the defense secretary wrote to the House Armed Services Committee. Story here.

ICYMI: Also not a fan of a new Space Corps — Gen. John W. Raymond is the commander of Air Force Space Command. Read his op-ed in Defense One arguing as much on Wednesday, here. 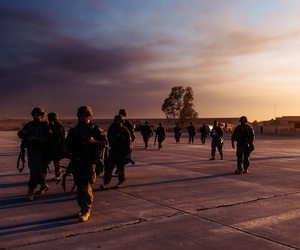 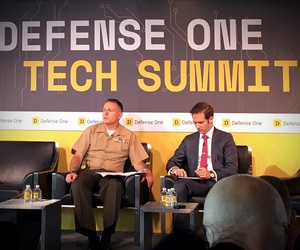 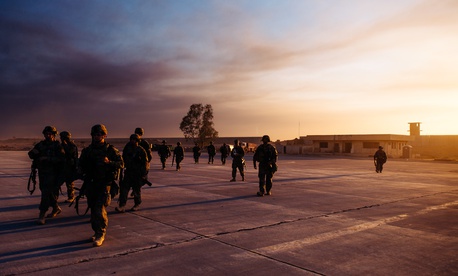 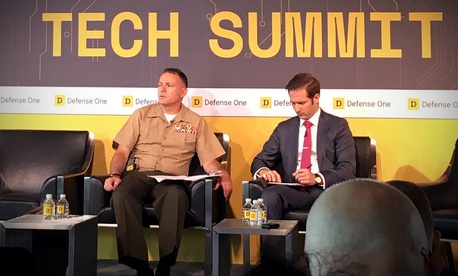