The Kremlin used social media to draw Americans to political rallies. “Russian operatives hiding behind false identities used Facebook’s event management tool to remotely organize and promote political protests in the U.S., including an August 2016 anti-immigrant, anti-Muslim rally in Idaho,” The Daily Beast reports in a blockbuster follow-up to last week’s revelations that Russian propagandists spent $100,000 on election ads shown to millions of Americans in the runup to last year’s presidential election.

Justice Department tells an RT partner to register as a foreign propaganda agent. “The company that supplies all services for RT America channel, including TV production and operations, in the U.S.” has been informed that it must register under the Foreign Agents Registration Act, according to a letter posted Monday to RT’s site by its editor in chief, Margarita Simonyan. FARA is “a World War II-era law that requires foreign principals that are seeking to influence U.S. public opinion to disclose their full activities and sources of funding,” reports Yahoo. The order suggests that the U.S. government may be looking to restrict the activities of RT and Sputnik, two media outlets owned by the Russian government. Both “were identified in a U.S. intelligence report in January as being arms of Russia’s ‘state-run propaganda machine’ that served as a ‘platform for Kremlin messaging to Russian and international audiences.’ They were both depicted as playing roles in Russia’s ‘influence campaign’ aimed at boosting Donald Trump and denigrating Hillary Clinton during last year’s presidential campaign.” Read on, here.

Putin tells Russia’s tech sector: Ditch foreign software or lose out on government contracts. “Russian state institutions have been gradually switching to using domestic technology as part of a Kremlin drive to cut imports. That drive accelerated after Western states imposed sanctions on Russia over its annexation of Ukraine’s Crimea region in 2014. However, private firms in Russia still primarily use imported technology,” reports Reuters.

That echoes similar concerns about the U.S. government’s widespread use of cybersecurity software by Kaspersky, a Russian firm. See, for example, this June piece from Nextgov.

What You Need to Know About Russia’s Big Wargame on NATO’s Doorstep // Ben Watson: Here’s what NATO and the region is watching for this year — and why.

Can North Korea Drag the US and China Into War? // Graham Allison: History offers clues about the likely course of a dangerous dynamic in east Asia.

How Al-Qaeda Benefits From America’s Political Divisions // Ali Soufan: If the United States wishes to defeat bin Laden’s heirs and the toxic potency of their message, it needs to recommit to its most basic values.

The Hurricanes, National Security, and What Comes Next // Michael Breen: Climate change increased the destruction wrought by Harvey and Irma, a fact we must acknowledge if we are to mitigate future disasters.

What the Iran Deal Can Teach America About North Korea // Ariane Tabatabai: If credibility depends in part on a country’s willingness to follow through on military threats, surely it also depends on whether it abides by diplomatic commitments.

Welcome to Tuesday’s edition of The D Brief by Ben Watson and Bradley Peniston. OTD1933: Leo Szilárd conceives the idea of the nuclear chain reaction. Have something you want to share? Email us at the-d-brief@defenseone.com. (And if you’re reading this on our website, consider subscribing. It’s free.)

The UN Security Council voted unanimously on Monday to issue new sanctions on North Korea for its continued work advancing its nuclear and missile programs — but, The New York Times reports, those new sanctions “fell significantly short of the far-reaching penalties that the Trump administration had demanded just days ago.”
What’s included with the new sanctions: “The resolution asks countries around the world to inspect ships going in and out of North Korea’s ports (a provision put in place by the Security Council in 2009) but does not authorize the use of force for ships that do not comply, as the Trump administration had originally proposed… The resolution also does not impose a travel ban or asset freeze on Mr. Kim, as the original American draft had set out… The resolution does ban textile exports from North Korea, prohibits the sale of natural gas to North Korea and sets a cap on refined petroleum sales to the country of two million barrels per year.”
And, “In a nod to Chinese and Russian arguments,” the Times reports, “the resolution also calls for resolving the crisis ‘through peaceful, diplomatic and political means.’ That is diplomatic code to engage in negotiations.” More here.

South Korea it is “not reviewing its policy on the redeployment of U.S. nuclear weapons,” Yonhap News agency reported Monday — a day after Sen. John McCain, R-Ariz., suggested Seoul should consider that nuclear option on CNN. “We are currently not reviewing the issue of tactical nuclear weapons,” Foreign Minister Kang Kyung-wha said Monday during a press conference in Seoul. “Our policy remains a complete commitment to denuclearization.” More here.

Helping keep North Korea afloat: “Russian smugglers…scurrying to the aid of North Korea with shipments of petroleum and other vital supplies,” the Washington Post reported Monday, citing a new assessment by U.S. officials. “Official documents and interviews point to a rise in tanker traffic this spring between North Korean ports and Vladivostok, the far-eastern Russian city near the small land border shared by the two countries. With international trade with North Korea increasingly constrained by U.N. sanctions, Russian entrepreneurs are seizing opportunities to make a quick profit, setting up a maze of front companies to conceal transactions and launder payments, according to U.S. law enforcement officials who monitor sanction-busting activity.” Read on, here.

Explainer: Get to better understand Russia’s biggest military exercise in years, Zapad 2017, in this five-minute clip from Defense One and the Atlantic Council’s Digital Forensics Lab.

Meet Viejšnoryja, the the fake adversary country for Russia’s big military exercise this week in its western military district and inside Belarus. “In the scenario created for the military exercise, a coalition of fictitious adversary countries (Viejšnoryja, Lubenia, and Vesbaria) forms to split the friendly ‘Northern Union’ (Russia and Belarus) by marching their troops into western Belarus,” the folks the Digital Forensics Lab report this morning. “This [fictional] aggression leads to full occupation of Belarus, which the Russian and Belarusian forces deployed for the exercise aim to repel.”
The BLUF: “The demographic profile of the fictional nation of Viejšnoria suggest the military planners of Zapad 2017 may view this region as a source of potential threats in real life, which might play an anti-regime role similar to the role that L’viv Oblast played during the Maidan events in Ukraine.” Read on, here.

While we’re on fake countries: “the U.S. Army Is Getting Tired of Liberating Atropia,” The Wall Street Journal reported Monday. “Atropia’s borders roughly coincide with Azerbaijan. Neighboring Limaria, a made-up country, coincides with Armenia. The fake country of Kemalia is roughly equivalent to Turkey… Atropia’s problem, it seems, is reality. It keeps interfering with an elaborately constructed military-training scenario.”
The “why” behind all this: “The U.S., its NATO allies, Russia and other militaries around the world use fictional scenarios to make their military drills more sophisticated. They require soldiers to understand the political environment and motivations of the people they are trying to protect, and defeat.” More here.

De-escalation zone update in Syria. Russia and Jordan are working “to roll out a plan to end fighting in southwestern Syria ‘in the fastest possible time’ — part of a peace pact for the border area brokered by Amman, Moscow and Washington,” Reuters reported Monday. “Jordan and Russia’s foreign ministers met in Amman to discuss progress in setting up a “de-escalation zone” in the particularly sensitive region that includes Syrian territory neighboring Israel… including Quneitra province bordering Israel, alongside the southern Deraa province adjoining Jordan. The official and diplomats said Washington had also secured an understanding with Moscow that militias backed by the Syrian government’s ally Iran must be pushed 40 km (25 miles) from the border. That might help allay Israeli and Jordanian concerns about the presence of Lebanon’s Iran-backed Hezbollah group in the area.” More here.

Newsflash: The Syrian army is “less than 10 miles” from U.S.-backed troops near the eastern city of Deir ez-Zor, Foreign Policy reported Monday. Some of the tensions raised by this proximity: “For Assad and the Iranian-allied militias that back him, that goal is ultimately to recover lost territory and oil resources in Syrian territory north of the Euphrates. In turn, the U.S. coalition’s objective is to assist the SDF in defeating the Islamic State in its new de-facto capital of Mayadin, south of the river.”
Said Nicholas Heras, a fellow at the Center for a New American Security: “Assad’s objectives are at odds with the coalition and vice versa.” Read on, here.

ICYMI, #LongRead edition: The “future of high-tech warfare” can be seen among the ruins of Mosul, Wired reported late last week after writer/photographers John Beck and Cengiz returned from an embed with Iraqi bomb defusers in west Mosul.
No time to read a long report? Jump to John Beck’s Twitter feed, where he’s posted videos with annotations and commentary, here.

Lastly today: Here’s a globe-trotting couple from Fort Hood, Texas. They’ve visited six continents and now every U.S. National Park — and they’ve climbed Mount Kilimanjaro together, according to NBC’s KCEN, reporting out of central Texas. Their names: John and Kendall Gomber, and they “met as cadets at West Point Military Academy.”
Who they are: “Captain Kendall Gomber is an assistant operations officer with the 504th Military Intelligence Brigade… [and] Captain John Gomber, an apache pilot with the 1st Air Cav Brigade [who] is deploying to Europe next month.” Kendall is deploying to the Middle East later in September.
Upon their return home, the two hope to visit Antarctica next. Story, here. 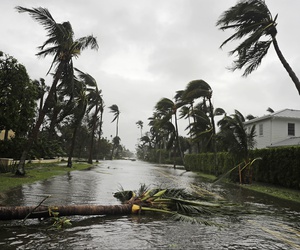 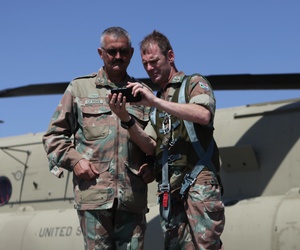 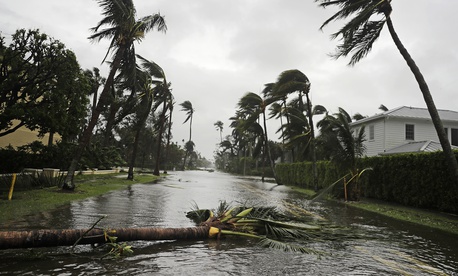 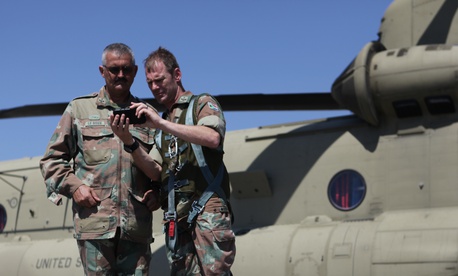