Should U.S. athletes go to the upcoming Winter Olympic Games in South Korea or not? America’s ambassador to the UN says that’s still an open question.

Asked on Fox News whether U.S. athletes would be able to compete, Nikki Haley replied: “There’s an open question. I have not heard anything about that, but I do know in the talks that we have — whether it’s Jerusalem or North Korea — it’s about, how do we protect the U.S. citizens in the area?”

Where and when the games are slated to take place: “Feb. 9-25 in Pyeongchang, a city about 50 miles from the demilitarized zone that separates North and South Korea,” The New York Times writes.

Haley’s words seemingly contradicts the CIA Director and President Trump’s National Security Adviser, both of whom said this past weekend, “Yes, of course,” and “Yes, Americans should feel safe” to attend because the U.S. military is ready to respond to a crisis on the peninsula, Defense One’s Kevin Baron wrote on Twitter from the Reagan National Defense Forum in California.

Next steps? “We don’t ever fear anything, we live our lives,” Haley said. “What we will do is make sure that we’re taking every precaution possible to make sure that they’re safe and to know everything that’s going on around them.”

Meantime, North Korea keeps up its defensive rhetoric, saying the country does “not wish for war, but shall not hide from it.” That in response to B-1B bomber drills conducted over South Korea today.

Replied Chinese Foreign Ministry spokesman Geng Shuang: “The outbreak of war is not in any side’s interest. The ones that will suffer the most are ordinary people.” Reuters has more, here.

By the way: A Chinese province next to North Korea is educating its citizens about nuclear war. Quartz has that story, here.

Japan and China have set up a “hotline” to avoid “sea and air clashes in disputed areas of the East China Sea,” Panda reported separately Wednesday.

Extra reading: “The Anatomy of North Korea’s New ICBM,” It’s yet another analysis that’s worth the click from The Diplomat’s Panda.

Newly Revealed Experiment Shows How F-35 Could Help Intercept ICBMs // Patrick Tucker: In 2014, the sensor-studded plane demonstrated an ability to track missiles, leading to a  “tactically significant” improvement in targeting.

Okay, Say Someone Hacks into the US Power Grid. Then What? // Caroline Houck: A joint research project between the Department of Energy and a geographic analytics company is mapping just how far the repercussions could spread.

Welcome to this Thursday edition of The D Brief by Ben Watson and Bradley Peniston. Email us. And if you don’t subscribe already, consider subscribing. It’s free. This is the day that will live in infamy. On a happier note, it’s also the day instant replay made its debut for the 1963 Army-Navy football game.

Shutdown deadline: tomorrow. The Democratic and Republican leaders of the House and Senate head to the White House at 3 p.m. today to see whether they can agree on a path forward, reports the Washington Examiner.
Two-week CR, then…? “Senate Majority Leader Mitch McConnell, R-Ky., told reporters that Republicans expect to vote this week to pass a short-term funding bill through Dec. 22 to ‘give us a little room to talk’ about a bipartisan deal to ease statutory budget caps for defense and nondefense,” writes Defense News.
Reminder: 2018 defense spending is capped at $549 billion. The White House requested $603 billion. The House and Senate Armed Services Committees want to spend $640 billion. For those numbers and far, far more, head over to the detailed analysis of the presidential budget request released yesterday by CSBA’s Katherine Blakeley.

The State Department has set up a Jerusalem-focused “emergency task force” to contain possible fallout from Trump’s decision to move the U.S. embassy in Israel, the Washington Post’s Josh Rogin reported Wednesday, noting, “The task force went live just as Trump was speaking to the nation about his Jerusalem decision, indicating that the State Department was preparing for fallout ahead of the announcement.”
Their task: “track worldwide developments following U.S. recognition of Jerusalem as the capital of Israel,” according to a memo obtained by Rogin. There are precedents of a sort, he writes, “includ[ing] the Japanese and Haiti earthquakes, the Kenyan elections and the attack on the U.S. mission in Benghazi.”
Not fans of the embassy move: SecState Rex Tillerson and SecDef Jim Mattis, The Hill reported Wednesday.

A big fan of Trump’s decision to delegate more power to military commanders in the war on ISIS: SecDef Mattis, the Washington Post’s David Nakamura wrote Wednesday after a cabinet meeting in the White House. There, Trump praised Mattis for “knocking the hell out of” ISIS — then said, “Of course, I made it possible by what I let you do, right?”
The Defense Secretary’s reply: “Yes, sir.”

Not a fan of Mattis telling them to do more against terrorists: Pakistan, where Mattis dropped by earlier this week to relay that (evergreen) message from Washington. Pakistan’s Express Tribune reports today, citing “inside sources,” that Pakistani officials “told the visiting dignitary that its hands were tied up in the fight against terrorism and would no more accept the oft-repeated mantra of ‘do more’ against alleged safe havens in the country.”
According to ET, U.S. officials “were told that the Trump administration’s new policy for Af-Pak region was not acceptable, and if it wanted to improve ties, then it should change its policy.”
Reminder: The State Department notified Congress in August that “$255 million in military aid for Pakistan [would be withheld] until the country takes steps to address U.S. concerns about providing safe haven to terrorist groups.” More to that old chestnut, here.

Trump asks Saudi Arabia to lift Yemen blockade. Bloomberg reports that on Wednesday Trump asked U.S. officials “to call the leadership of the Kingdom of Saudi Arabia to request that they completely allow food, fuel, water, and medicine to reach the Yemeni people who desperately need it.” Notes Bloomberg, “Trump issued the statement shortly after he announced the U.S. was recognizing Jerusalem as the capital of Israel, a move widely opposed in the Middle East.” Read on, here.

Message to the Defense Department, from a chief humanitarian aid worker inside Yemen: “Bombs supplied by U.S. & Western allies to Saudi coalition were just dropped on a civilian neighbourhood near our Sanaa office,” Secretary General of the Norwegian Refugee Council, Jan Egeland, tweeted Tuesday. “Please call Saudis and tell them to stop bombing densely populated areas so we can resume saving lives.”

ICYMI: The U.S. military presence in Syria is four times what the Pentagon previously claimed, Buzzfeed News and NYTs reported Wednesday. There is now about 2,000 personnel there, Pentagon spox Eric Pahon said. The previous total was 503 — what Pahon called an “artificial construct” that became increasingly inaccurate as the campaign against the Islamic State progressed, the Times reports.
Caveat: “The updated figure does not reflect troops assigned to classified missions and some Special Operations personnel, Mr. Pahon said. The number also does not include combat aircrews flying from bases outside Iraq and Syria, nor from Navy aircraft carriers at sea.”
One more thing: “About 3,000 Islamic State fighters remain in Syria, mainly in a strip of land along the Euphrates River Valley south of Deir al-Zour,” Pahon told reporters.
That’s quite a different story from the one Russia announced Wednesday, declaring the war on ISIS “mission accomplished.” Reuters has more on that Moscow head-scratcher, here.

U.S. intel and special operations officials say ISIS has a new caliphate, and it’s in cyberspace. The two officials — Lora Shiao, acting director of intelligence at the National Counterterrorism Center; and Mark Mitchell, acting assistant defense secretary for special operations/low-intensity conflict — spoke to the Senate Homeland Security and Governmental Affairs Committee on Wednesday.
Hard to square how this is exactly new, since ISIS hackers allegedly broke into CENTCOM’s Twitter feed back in January 2015. Read more from the exchange Wednesday in Washington, via Reuters, here.

The U.S. military spent more than $7 billion last year on AI, big data and the cloud, Defense News reported Wednesday. But what has that money yielded? Lots of jargon and contracts — which you can dig into in more detail, here.

Newsflash: The U.S. Navy is only able to fulfill about half of its tasks, Navy Secretary Richard V. Spencer told Military.com this week.

And finally today: We have learned the identity of one of Mosul’s most useful eyes and ears during the ISIS grip on the northern Iraqi city. His name is Omar Mohammed, and he’s 21 years old. He maintained the Twitter feed at Mosul Eye for the duration of ISIS reign in Mosul. The Associated Press caught up with Omar, and has now told his story in a #LongRead packed with bravery, tragedy and a fierce desire to survive amid truly harrowing circumstances that stretched more than three years. 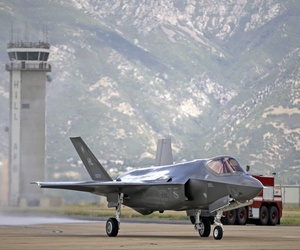 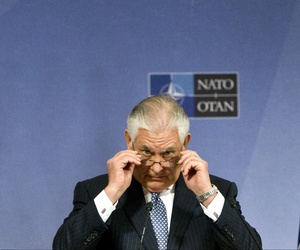 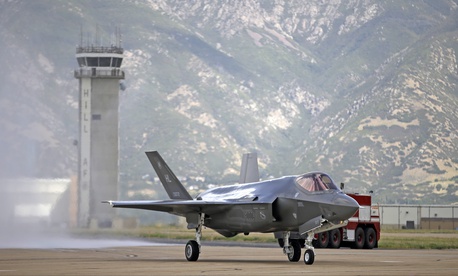 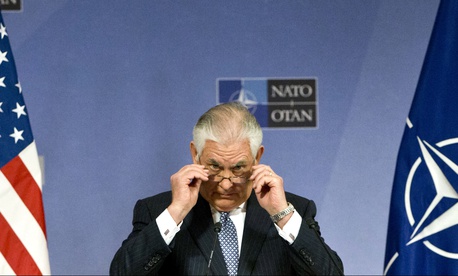