How many troops to the border?; US digs in at Manbij; Rough month for military aviation; Roller-coaster defense stocks; and just a bit more…

“Anywhere from 2,000 and 4,000” National Guard troops could be deployed for President Trump’s new surge to the U.S.-Mexico border, he told reporters on Air Force One Thursday evening. The president said his staff is currently looking into the costs, but already Trump said he has “a pretty good idea” what that might be. Not that he was saying what that might be just yet.

One thing POTUS wants out of this: For the troops to stay on the border until his wall is built, CNN reports.

The Pentagon has created a coordination unit: it’s called the “Border Security Support Cell,” and it will be led by Kenneth P. Rapuano, assistant secretary of defense for homeland defense and global security.

The fine print: “This is a 24/7 cell comprised of several DOD representatives” which “will operate for the foreseeable future to ensure we surge our capacity to meet the President’s enhanced border security goals. The cell will focus on supporting CBP’s priorities based on missions and threats, which will determine the timeframe and number of military personnel employed.”

Time to Get Out of Syria // Gordon Adams: The national security ‘blob’ who warn departure would be a disaster are wrong.

Counting the Dead in Mosul // Samuel Oakford: The civilian death toll in the fight against ISIS is far higher than official estimates.

Trump’s Militarization of the US-Mexico Border Won’t Come Cheap // Heather Timmons: Both presidents Barack Obama and George W. Bush tried it. And both times it was deemed an expensive failure.

Welcome to this Friday edition of The D Brief by Ben Watson and Bradley Peniston. Email us. And if you find this useful, consider forwarding it to a friend or colleague. They can subscribe here for free. OTD1909: Lt. Cmdr. Robert Peary, USN, and Matthew Henson reach the North Pole (or pretty darn close).

In the days since Trump signaled his intent to pull U.S. troops out of Syria “very soon,” new video (via Kurdistan24) has surfaced from the contested city of Manbij appearing to suggest just the opposite is happening on the ground there.
What you’ll learn: Two “new” bases, or outposts, are being built in the vicinity of Manbij. As well, additional troops have allegedly arrived in the city recently from the U.S., UK, and France, according to “senior members of the Manbij Military Council, an ally to the US-backed Syrian Democratic Forces.”
See also: The New York Times on how U.S. troops in Syria aren’t pulling up stakes, but rather setting down lawn chairs. The Times’ former Marine Thomas Gibbons-Neff rolls up quite a bit of the imagery available in open source searches online, here.

Million-dollar detainee camps in Syria. The U.S.-led counter-ISIS war now finds the Pentagon “spending about $1 million to help detain thousands of Islamic State fighters and their family members in makeshift camps run by Kurdish militias in northern Syria,” the Times’ Eric Schmitt reported Thursday.
Reportedly held: “several thousand detainees — including at least 400 fighters from more than three dozen countries and their families, as well as other Syrian militants.”
This line: “One senior American official said as many as 50 to 60 fighters were detained in a single room.”
One seriously big problem: None of the fighters’ home countries want them back. It’s unclear what the U.S. military’s strategy might be from here. Lots more about the mounting risks with this arrangement, here.

“Victory” for President Trump isn’t always what “victory” means for Trump’s generals. How the two sides bridge that gap and move forward with U.S. foreign policy is the topic of this report from the Washington Post’s Greg Jaffe.
Today is the one-year anniversary of Trump’s cruise strikes on Syria, U.S. News’ Paul Shinkman reminds us in this retrospective.

Tough month for military aviation. Jeff Schogol lays it out at Task & Purpose: “Four Marines died when their CH-53 Super Stallion crashed during training. A Marine AV-8B crashed during take-off and a Marine CH-53E was damaged during a landing in Djibouti. And then an Air Force F-16 Thunderbird crashed, killing the pilot. The back-to-back crashes prompted Djibouti to ground all U.S. military aircraft, resulting in the U.S. cancelling the rest of an exercise in that country.
“The weeks before were hardly any less grim. Eleven service members were killed in March in two separate crashes involving an Air Force Pave Hawk HH-60 and a Navy F/A-18F Super Hornet. Some experts believe the military’s straining operational pace is fueling the aviation crisis.” Read on, here.
More on the grounding of U.S. military flights out of Djibouti, from CNN.

Was ISIS really as good at governing as the NYT says? At least one Iraq-based analyst — Patrick Osgood of the Iraqi Oil Report —has doubts. He warns against conflating found documents from ISIS with an actual ability to govern as well as the Times’ Rukmini Callimachi suggests.
The short read: “The metrics for ISIS ‘state’ durability shouldn’t be chit generation, but whether ISIS was capable of generating economic value after external windfalls dried up. The answer to that is no, because ISIS was a parasitical gangster entity albeit with a high chit ethic.” Read his extended take in full, here.

The White House wants to sell $1.3 billion in howitzer equipment to the Saudis, the Defense Security Cooperation Agency announced Thursday, making no mention of Riyadh’s war in neighboring Yemen.
Involved: 155mm M109A5/A6 Medium Self-Propelled Howitzer structures for conversion to M109A6 Paladin Howitzer systems.
The justification: To “contribute to the foreign policy and national security of the United States by helping to improve the security of an important partner which has been and continues to be a leading contributor of political stability and economic progress in the Middle East.”
What happens next: Congress has 30 days to object. More from Voice of America, here.
Elsewhere in the region: Bahrain now hosts the first permanent British base in the Middle East in 40 years. The Associated Press has that one, here.

France’s external military plan for Europe has led Paris to get “in touch with a dozen countries, including Germany, the Netherlands, Britain and Denmark,” even forming a working group about the idea in March, Reuters reported this week. The idea is to form a “deployable European military crisis force outside of existing European Union efforts.” And it’s hardly a done deal just yet. More here.

ICYMI from Silicon Valley: Some Google employees are protesting the work their company’s algorithms are doing for the Pentagon’s drone strike program, NYTs reported this week.

U.S. Army wants larger wargames on shorter notice, Forces Command leader Gen. Robert Abrams tells Defense News: “I think there is probably a very, very good chance that we, as part of this new paradigm outlined in the National Defense Strategy,” which calls for the military to be operationally less predictable to China, Russia, and other potential adversaries — will see those exercises happening “not necessarily just to [U.S. European Command] but maybe to other combatant commands.” A bit more, here.
The Army is also looking to trim major programs. Secretary Mark Esper said Thursday at a Heritage Foundation event that the service is looking at its 800-plus programs “to decide which stay, which will be slowed down and which get the axe,” Shephard Media reported (reg. req). “I need to be a good steward of the taxpayer’s dollars and make sure I can free up all the money I can. It’s going to mean cutting programs,” Esper said, added that the G-8 is leading a review that may or may not have recommendations in time to shape the 2020 budget proposal.
Read the Army’s comic book about an attack by Russian robo-tanks, from the Army Cyber Institute at West Point. Motherboard: “‘Silent Ruin’ is the latest in a long run of official military comics. Some are simple training aids for weapons maintenance. This one aims to predict the future of warfare.” Read it here.

For your eyes only: U.S. Marines recently fired a Stinger training missile from aboard the amphibious assault ship USS Iwo Jima (LHD 7). Photo of that, here.
Replied former Marine officer C.J. Chivers: “If the day comes for firing live stingers off amphibs, it means the American military found another way to fail. If it comes that, where exactly are we? In a rapidly escalating engagement with China, North Korea, Russia or Iran? Or general war? Either way, deep into strategic failure. Given the relative ranges of Stingers and anti-ship missiles, in [a] tactical nightmare, too.”

Coming Monday: The Future of War Conference 2018, from New America and Arizona State University. See what it’s all about in this 45-second promo clip.
Speaking: Vice Chiefs for the Army and Air Force, DOD officials, veterans, experts, and lots more.
Topics covered:

Review the agenda, or register for yourself, here.

And have a safe weekend, everyone. We’ll see you again on Monday! 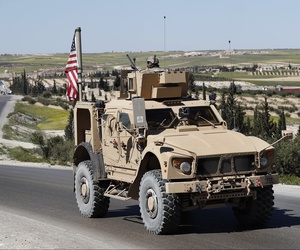 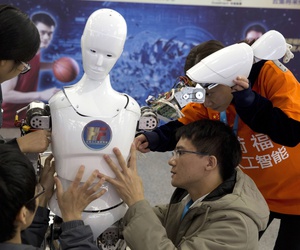 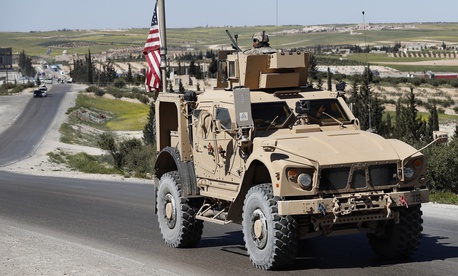 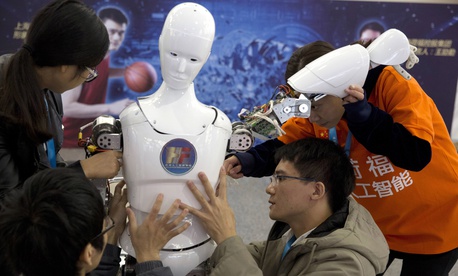