Clashing worldviews on Capitol Hill. “Sen. Jim Inhofe, R-Okla., and Rep. Adam Smith, D-Wash., disagree on a lot of things,” writes Defense One’s Katie Bo Williams. There are individual policy differences, on the one hand; but more deeply there is a “fundamental schism” in their worldviews.

That schism is perhaps best summed up in their answers to this question: Just how bad are the threats that face America? Williams takes us inside the heads of the incoming chairmen of the Senate and House Armed Services Committees.

On the Senate side: “Inhofe says that ‘we live in the most dangerous world of my lifetime,” and so he traveled to the White House earlier this month to urge President Trump not to cut the defense budget for 2020.

On the House side: Smith describes the ouroboros (or tail-devouring quality) of dire threat assessments and demands for more defense funds — that’s “simple paranoia,” he told Williams.

Which all means: Perhaps nowhere is the schism more stark than in defense spending. Inhofe has argued that the current budget — $733 billion for 2019 — should be a “floor” not a “ceiling.” For Smith, the answer is deterrence, which he argues can be done efficiently through a more rigorous examination of where the Pentagon is spending the money it already has.” Where to go from here? Read on.

US Army Narrows Search For Light Tank to Two Companies: Marcus Weisgerber: General Dynamics and BAE Systems will each build 12 prototypes of an up-to-40-ton armored vehicle.

The World in 2019: Trump’s Luck, Cold Wars, and Trouble in the Americas // Uri Friedman, The Atlantic: As foreign-policy experts assess what the year ahead holds, one issue comes to the fore: whether President Trump’s good fortune will continue.

Russia Is the Biggest Backer of Cybercrime. The US Must Get Serious About Deterrence // John P. Carlin: Convincing Putin that further attacks will trigger automatic, severe responses is the best way to start.

Welcome to this Tuesday edition of The D Brief by Ben Watson and Bradley Peniston. Thanks for reading! And if you find this stuff useful, consider sharing it with somebody you think might find it useful, too. On this day in 1972, President Richard Nixon launched Operation Linebacker II, the largest air campaign since World War II — 11 days of bombing using over 20,000 tons of munitions, largely between Hanoi and Haiphong. A cultural relic of the battle: the term “carpet bombing,” popularized by U.S. antiwar activists over the course of the 1972 Christmas holiday.

Yemen ceasefire: Day One. The war in Yemen has died down slightly as “parties are observing the first day of a UN-negotiated ceasefire in the key port city of Hodeidah,” The Guardian reports this morning.
Up next, hopefully: retired Dutch general Patrick Cammaert will deploy to Hodeidah tomorrow “under UN authority to oversee the ceasefire and the two-phase troop withdrawal.”
The goal: get troops out of the port area of Hodeida by mid-January to free up aid flow to the Yemeni capital of Sana’a.
Still to come: a possible “mass prisoner swap.” Then — if the ceasefire holds that long — it’s off to things like “the reunification of Yemen’s central bank and the payment of salaries to tens of thousands of public servants.” Big if. Read on, here.

Afghan peace talks latest: “a six-month ceasefire” and “a future withdrawal of foreign troops” are two proposals being workshopped at ongoing U.S.-Taliban negotiations in Abu Dhabi, Reuters reports on day two of the three-day meeting. Other options include a Taliban prisoner release and an actual timetable for withdrawal.
Also in Abu Dhabi, but not meeting with the Taliban: officials from Kabul’s government.
Attending on behalf of the Taliban: Sher Mohammad Abbas Stanikzai, head of the movement’s political office in Qatar; chief of staff of Taliban leader Mullah Haibatullah Akhundzada; as well as “members of the leadership group based in Quetta, Pakistan.” And all those guys met reps from Saudi Arabia, Pakistan and the United Arab Emirates ahead of the U.S. talks.
And on the U.S. side: Zalmay Khalilzad, U.S. Special Representative for Afghanistan Reconciliation. It’s unclear how any of this will shake out, so… stay tuned.

While the White House whispers about an Afghan withdrawal by the 2020 election, one remote U.S. military base south of Kabul is “rapidly expanding,” Stars and Stripes reported Monday.
Location: Camp Dahlke West, 60 miles south of Kabul and “just south of the former Forward Operating Base Shank, which was given to the Afghan military during the 2014 military drawdown.” Now Dahlke is housed by soldiers of the U.S. Army’s 1st Security Force Assistance Brigade, as well as a cavalry unit and dozens of contractors.
Expanding how? “Built almost from scratch during the past year,” it was originally “only a few buildings around an airstrip.” Now it has “a chapel, a recreation room, a laundromat and a gym. Engineers are building enough housing for 800 soldiers, including for the 2nd Security Force Assistance Brigade, which will arrive next year.” Read on, here.
Wanna catch up with the commander of the 1st SFAB, Brig. Gen. Scott Jackson? Listen to our 13-minute chat with him from late September over on Stitcher, here.

Because why not? Here’s a cake in the shape of the Pentagon, courtesy of our pals at the Center for Strategic and International Studies — and apparently via Costco in Arlington.
ICYMI: What would the Pentagon do with $750 billion? Here’s what CSIS’s Todd Harrison is thinking would happen. Hear Todd in conversation with our own Marcus Weisgerber talking about that $750B question and a lot more in the latest episode of Defense One Radio.

I’ll be on the border for Christmas, caravan-deterrence edition. Nearly half of the 5,900 active-duty U.S. troops deployed to three states along the U.S.-Mexico border will be sent home for Christmas, the Pentagon said Monday. Which means nearly 3,000 of them will stay to prevent caravans of migrants from crossing into the United States unlawfully.
The latest publicized training U.S. troops are doing on the border: Civil disturbance, with riot shields, gas masks, face shields and tactical leg guards.

The banality of China’s massive detention policy of Uighurs in Xinjiang appears to make a bit more $ense. The Associated Press reports today from southwestern Xinjiang’s city of Hotan that some of the estimated 1 million detained Muslims across the province are being forced to work in “manufacturing and food industries” — some inside the detention camps, “others are privately owned, state-subsidized factories where detainees are sent once they are released.”
What’s more, AP traced some of the manufactured products to the U.S. Badger Sportswear, “a leading supplier in Statesville, North Carolina,” in particular.
The bigger picture: “The shipments show how difficult it is to stop products made with forced labor from getting into the global supply chain, even though such imports are illegal in the U.S. Badger CEO John Anton said Sunday that the company would source sportswear elsewhere while it investigates.”
China’s reax: “Those reports are completely based on hearsay evidence or made out of thin air,” a foreign ministry spokesman said Monday.
According to China’s own coverage of the camps from a state broadcaster in October, “Terrorism and extremism are the common enemy of human civilization,” AP reports from the program. In response, the Xinjiang government has opted for vocational training to solve this “global issue” of terrorism and extremism. Read the full AP report, here.

GPS jammers. Elisabeth Braw has a breezy, readable piece about recent episodes of GPS jamming — primarily by the Russians, but also by one dude who forgot to turn his jammer off at the airport. There’s not much to be done, she concludes, except wait for a new generation of GPS-free navigation systems — and just maybe, learn to read a paper map. Read, here.
ICYMI: Defense One explored a few promising new approaches in our ebook “Beyond GPS.”
One more thing: SpaceX is launching a GPS-III satellite into orbit today. Bloomberg’s Tony Capaccio has the story of what’s at stake for Elon Musk, the U.S. Air Force, and Lockheed Martin Corp., here.

And finally today: Re-enter the highway to the danger zone just so you can see Tom “Maverick” Cruise reunite with an F-14 Tomcat on the set of the new Tom Gun 2 film. Our latest Top Gun 2 fanboy reporting comes to us today from The Drive, which spotted the photoset initially posted to Hollywood Pipeline over the weekend.
Location for the shoot: Lake Tahoe, pretty recently.
What you’ll also find in the photoset: A tank, a couple helicopters, dudes standing around, and a very cold work environment. For what it all means, head back to The Drive and they’ll keep you up to date with what they know — and what they’d like to see in the sequel. 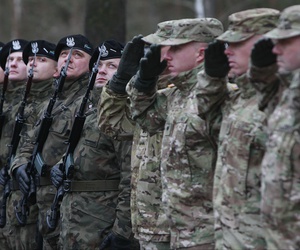 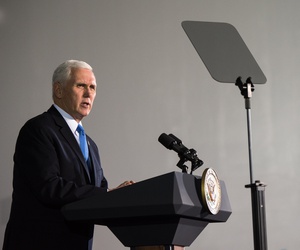 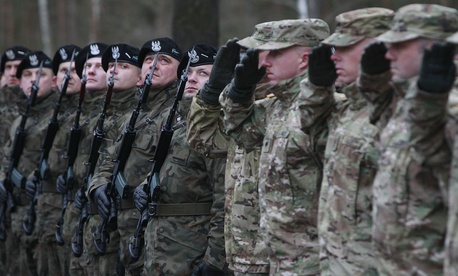 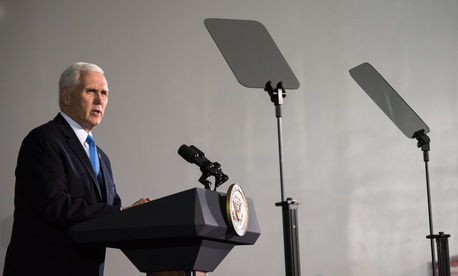