Worth noting: North Korea is still not trying to give up its nuclear weapons, Reuters reminds us in its preview report. “[T]here has been no indication of any narrowing of differences over U.S. demands that North Korea abandon a nuclear weapons program that threatens the United States or over Pyongyang’s demand for a lifting of punishing sanctions.”

ICYMI: Review what a decent path toward denuclearization could look like, as well as the overall stakes and likely enormous costs of blundering into war with North Korea in episode 34 of Defense One Radio — featuring Melissa Hanham, Joshua Pollack, Joe Cirincione, Uri Friedman and Jeffrey Lewis.

Trump’s New Missile Policy Relies Heavily on Largely Unproven Technologies // Patrick Tucker: New adversary missiles are to be met by a host of technologies that, by and large, don’t exist yet.

Missile Defense Review Calls for Protecting US From Cruise Missiles // Marcus Weisgerber: The long-awaited report calls for technology development, but stops short of calling for the deployment of hypersonic interceptors and space-based lasers.

What Lies Beyond America’s Deadliest Day in Syria // Kathy Gilsinan: The assault in northern Syria underscores why Trump wants to get out — and why that’s going to be difficult.

Welcome to this Friday edition of The D Brief by Ben Watson and Bradley Peniston. #OTD 1911, Eugene Ely landed his Curtiss biplane on the USS Pennsylvania, the first landing of a fixed-wing aircraft on a warship. We’re off for MLK Day, so we’ll see you on Tuesday. Thanks for reading!

Trump is “giving ISIS new life” by pulling the U.S. out of Syria now, says the man who ran Trump’s counter-ISIS war 27 days ago. Brett McGurk, a man who’s been in and out of Syria for the past three years, writes this morning in the Washington Post, “The president’s decision to leave Syria was made without deliberation, consultation with allies or Congress, assessment of risk, or appreciation of facts.”
Some of the false things the commander in chief apparently believes:

McGurk’s oped reads not unlike his thorough opening remarks at the top of State Department briefings on the ISIS war. He opens reviewing the gains made so far; shifts to word of Trump’s desired exit from Syria; pivots to the consequences of that; then lays out some practical considerations given Trump’s order.
BLUF right now: “The focus now must be on protecting our military and getting out safely.” Read on, here.

Taking the low road. President Trump cited the ongoing partial government shutdown Thursday and revoked the military travel of House Speaker Rep. Nancy Pelosi and her colleagues to NATO HQs in Brussels and then to Afghanistan. That message came via the White House literally moments before Pelosi & Co.’s bus was to depart Washington. Said Sen. Lindsey Graham: “One sophomoric response does not deserve another.” Review that last-days-of-the-republic story from CNN, here.
BTW: The White House blew the lid off Pelosi and her team’s commercial travel plans, too, her Deputy Chief of Staff, Drew Hammill, said today on Twitter.
Why would Pelosi & Co. care about NATO and Afghanistan? “The United States Congress is a co-equal branch of government in our system of checks and balances,” Hammill wrote. “The Congress has a constitutional responsibility to conduct oversight in the war zone where our men and women in uniform are risking their lives every day… In light of the grave threats caused by the President’s action, the delegation has decided to postpone the trip so as not to further endanger our troops and security personnel, or the other travelers on the flights.” More here.
Meanwhile, Sen. Lindsey Graham flew to Ankara, where he met Turkish Recep Tayyip Erdoğan “to discuss the situation in Syria as the United States prepares to withdraw troops,” AP reports.

POTUS rolls out missile-defense review at Pentagon. “Trump led off his speech — ostensibly about missile defense — with a rant about border security, the wall, and the government shutdown, criticizing Democrats and House Speaker Nancy Pelosi, D-Calif.,” reports Kevin Baron. “This kind of partisan attack is simply not done at the Pentagon,” and the select group of officers assembled for the rollout did not applaud.
Trump misrepresented his administration’s strategy. When the president finally turned to the new Missile Defense Review, he said its goal is to stop any missile fired anytime, anywhere, anyplace. But the report itself says it would be impossible to stop, say, a full-on barrage of ICBMs from Russia or China. Budgets and technology — even the space-based lasers and other maybe-in-the-future gear that the report calls for developing — only permit defenses that may be able to ward off limited attacks.
Trump touted the review’s recommendation to “reduce bureaucracy” and “streamline” development. How’d that work last time it was tried? “I wrote a report about what happens when you ‘streamline’ missile defense acquisition and reduce oversight,” Union of Concerned Scientists’ Laura Grego tweeted. “You construct a poorly-working $67 billion Ground-based Midcourse defense system.” Read the report, here.
Overall, reports Defense One’s Marcus Weisgerber: “The Pentagon is planning to create a missile shield to protect the U.S. from low-flying Russian and Chinese cruise missiles using a mix of interceptors, fighter jets, satellites and radars, the Trump administration announced Thursday.”
Bottom line, from Defense One’s Patrick Tucker: “Arms watchers have observed China, Russia, and North Korea rapidly developing new missile capabilities. The Trump administration’s newly unveiled policy solution to this problem, embodied in the Missile Defense Review released Thursday, is a crash effort to develop tech and hardware solutions that are either less than perfect or so new and experimental as to be almost speculative.” Read that, here.

And now for something completely different. Pennsylvania police want to practice DUI stops using actual drunk humans — and you could help. Requirements include “Be willing to drink hard liquor to the point of inebriation,” and of course, “Have a sober/responsible party take care and control after the training.”
Location: Kutztown Borough Police Department, about an hour and a half northwest of Philadelphia.
Update: Next time, Gadget. Spots filled really fast, the cops said.

Navy Secretary Spencer: “We do have a national debt issue. If we think we’re going to get increasing dollars ad infinitum, folks, think again.” More from his remarks this week at the 2019 Surface Navy Association symposium, via USNI, here.

UN ceasefire monitors were fired upon yesterday in the Yemeni city of Hodeida, and no one knows exactly who fired the shots. “Thursday’s shooting came a day after the Security Council approved sending as many as 75 U.N. monitors to Yemen to strengthen last month’s cease-fire agreement for Hodeida,” Voice of America reports. “The deal also calls on both sides to withdraw their forces in the city. The deal has generally held, despite occasional skirmishes, but both the rebels and Yemeni government have been slow to fully implement it.”
As for Yemeni peace talks, AP reports from Sana’a, “Separately, representatives of Yemen’s warring sides met in Jordan for a second day Thursday for talks on implementing a prisoner exchange also agreed to in Sweden.” Recall that “In Sweden in December, the two sides agreed to confidence-building measures, including the exchange of thousands of prisoners. But the implementation of that deal has been slow and marred by violence.” More here.
One more thing from Yemen: ISIS and al-Qaeda are still trying to kill each other. Oxford University’s Elisabeth Kendall has been following those two insurgencies for years on her Twitter feed and has the latest, here.

Across the Bab el-Mandeb Strait in Somalia, al-Shabaab has reportedly ambushed an Ethiopian military convoy about 60 miles northwest of Mogadishu, near Bur Hacaba, Voice of America’s Harun Maruf writes on Twitter. “Al-Shabaab used IEDs followed by heavy attack. Significant casualties have been reported.” A few more details here and here.

Thousands more children may have been separated from their families at the Mexican border than the Trump administration has yet said. In December, the U.S. Department of Health and Human Services reported that 2,737 children had been taken from their parents under a policy issued in spring 2018 and scuttled by a federal court in June 2018. But a new report from HHS’ inspector general said the separations began months before the new policy was officially announced.
Reminder: As the New York Times reports: “While the policy was framed as a decision to prosecute those who entered the United States illegally, it resulted in thousands of migrant parents spending months in agonized uncertainty, unable to communicate with their children and in many cases not knowing even where the children were.”
Credibility gap: DHS Secretary Kirstjen Nielsen tweeted on June 18, 2018: “We do not have a policy of separating families at the border. Period.”

Pentagon sends new climate-change report to Congress. The Jan. 16 report “matter-of-factly acknowledges that climate change is occurring and has national security implications. It describes specific bases with priority missions that are experiencing impacts, including floods, droughts, wildfires, and thawing permafrost,” says a New America blog post.
The think tank’s recommendation: “It would be great if Congress would reward the bases that self-reported climate impacts for this report — all of which have important missions — with pride of place for appropriations. Nothing says ‘I care’ like money.”
The likelihood of that: As likely as climate-change denier and SASC Chairman Sen. James Inhofe admitting that he is wrong about humanity’s greatest 21st-century challenge.

Background on the project: It took four years and “relied on nearly 30,000 pages of handpicked declassified documents, hundreds of hours of original interviews… [of] President George W. Bush, Secretary of State Condoleezza Rice, Secretaries of Defense Leon Panetta and Robert Gates, Chairmen of the Joint Chiefs of Staff, and every theater commander for the war, among many others.”
N.B. The report was completed in 2016, but — as The Wall Street Journal reported in October — Gen. Ray Odierno, who commissioned the report, wasn’t pleased with how it portrayed his actions and several other aspects. Last fall, however, Gen. Mark Milley scrapped plans to rewrite sections. That recent history via Task & Purpose. 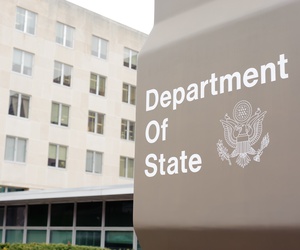 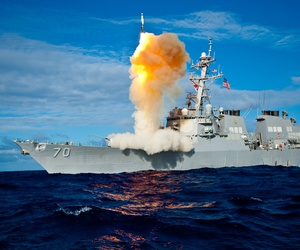 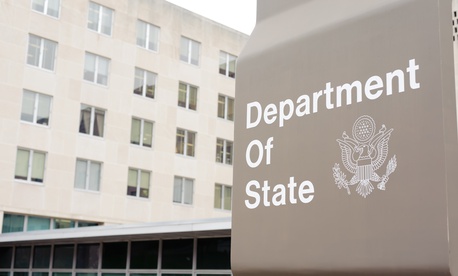 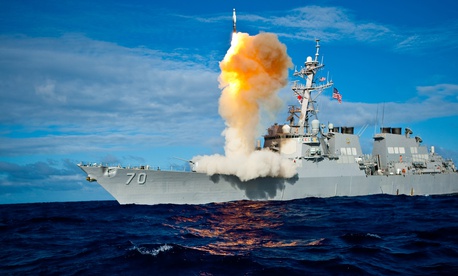