Developing: U.S. Air Force Secretary Heather Wilson is quitting to pursue a career in the world of academia on May 31, Reuters reports in a decision few Pentagon-watchers openly predicted would happen quite so soon. News of Wilson’s departure comes a day after an Oval Office meeting between President Trump and Acting Defense Secretary Patrick Shanahan, our own Marcus Weisgerber reports.

“I think it’s true” said Pentagon acting press secretary Charlie Summers, in a Friday morning off-camera gaggle with reporters, reports Katie Bo Williams from inside the building. He’s read the reports, he said as he walked in. “Next question please.”

Update: Wilson confirmed the news in a tweet just before 12 p.m. EST.

Today I informed the President I will resign as Secretary of the Air Force to be President of the University of Texas at El Paso. It has been a privilege to serve with our #Airmen—I am proud of the progress we have made to restore the readiness & lethality of #USAF.

Wilson — who some members of Congress touted as a possible candidate to replace former Defense Secretary Jim Mattis — clashed last year with now acting Defense Secretary Patrick Shanahan and other administration officials over President Trump’s desire to create a Space Force, a sixth branch of the military. However, Wilson was recently put in charge of planning for the the Space Force, which the Pentagon wants to create within the Air Force, similar to the way the Marine Corps is part of the Navy.

For what it’s worth: Wilson was all smiles and gave no indication she would be stepping down Thursday evening before a private screening of the film ‘Captain Marvel’ at the Smithsonian Air and Space Museum. More from that event below the fold.

Trump leans on America’s allies abroad to pay up. The U.S. and the South Korea have finalized the first troop cost-sharing agreement under President Trump (Associated Press), and now the White House is signalling it wants to force treaty allies like Germany and Japan hosting American troops in large hubs to start paying protection money (Bloomberg).

First, the RoK: Trump administration officials spent more than a year negotiating to arrive at an 8 percent increase in Seoul’s payment to Washington to host roughly 28,500 U.S. troops on the peninsula. The new deal only covers one year, not the customary five, and comes in at $925 million, The New York Times first reported in February, “an increase of $70 million from last year’s $855 million.” That’s the deal finalized today, AP says. Signatories were South Korean Foreign Minister Kang Kyung-wha and U.S. Ambassador Harry Harris, the former U.S. Pacific Command commander.

Next, Trump looks to squeeze Germany and Japan: The White House is calling it “Cost Plus 50,” Bloomberg reports, meaning that U.S. allies would “pay the full price of American soldiers deployed on their soil — plus 50 percent or more for the privilege of hosting them, according to a dozen administration officials and people briefed on the matter.”

“A colossal mistake”: Retired Lt. Gen. Ben Hodges, the most recent former U.S. Army Europe commanding general, blasted the idea in an email to Defense One: “It shows either a complete lack of understanding or a complete disregard for the value of the access we get from having bases in Europe (DEU, ITA, TUR, GRC, etc) which are essential to our own security and for why we have any troops or capabilities that are stationed overseas.  You can’t defend America from Virginia, North Carolina, and California.”

Hodges continued: “EUCOM and AFRICOM in Stuttgart are not there to protect Germany…they’re there as forward deployed Hq’s to work with Allies and Partners and to enhance relationships that are essential for our own security. Where would we be without Ramstein AFB or Incirlik AFB? Or the Navy bases in the Med? Or the ability to deploy troops rapidly to trouble spots in Europe, the Middle East or Africa? The U.S. does not have the capacity by ourselves to do everything we need to do to ensure our own security and the security of critical spaces and assets…we need Allies…and our most reliable Allies come from Europe, Canada, Australia, Japan, and ROK. Why do we constantly bash them?”

Worth noting: The plan is “far more advanced than is publicly known,” Bloomberg reports, as the White House has drawn up plans for “Germany, Japan and eventually any other country hosting U.S. troops.” However, those same “Officials caution that the idea is one of many under consideration as the U.S. presses allies to pay more, and it may be toned down.”

Emphasis on transactionalism. The National Security Council has drawn Pentagon planners into the effort, tasking them with “calculat[ing] two formulas: One would determine how much money countries such as Germany ought to be asked to pay. The second would determine the discount those countries would get if their policies align closely with the U.S.” Lots more food for thought in Bloomberg’s lengthy report, here.

A word on transactionalism: Former NSC Director for Russia, Michael Carpenter, told us America’s allies in Europe are deeply concerned over the way the Trump administration views alliances, elevating deal-making above traditional relationships. If you missed it, you can catch that episode on Spotify, here. (Or you can read the transcript, here.)

ISIS Is ‘Waiting for the Right Time to Resurge’: CENTCOM Commander // Katie Bo Williams, Defense One: Gen. Joseph Votel offered lawmakers warnings on Syria — and an upbeat message on Afghanistan.

Researcher: The West Isn’t Ready for the Coming Wave of Chinese Misinformation // Patrick Tucker: Beijing’s social-media operations are larger and more effective than many realize.

Don’t Call It an ‘Arms Race’: US-China AI Competition Is Not Winner-Takes-All // Justin Sherman: The most common framing of the two countries’ artificial-intelligence development is dangerous.

Global Business Brief // Marcus Weisgerber: What we know, and don’t, about the FY20 budget request; Navy’s next frigate; Eyes on 5G.

Welcome to this Friday edition of The D Brief by Marcus Weisgerber, Kevin Baron, Katie Bo Williams and Ben Watson. Thanks for reading! And if you’re not subscribed, you can do that here. On this day in 1862, the Battle of Hampton Roads — “the first engagement of ironclads in history” — began at what we now call Fort Monroe, Va.

Now-outgoing SecAF responded to Rep. McSally’s rape revelation. Air Force Secretary Heather Wilson responded to Arizona Republican and retired Air Force Col. Sen. Martha McSally’s revelation on Capitol Hill this week that she was raped while serving.
Wilson: “Martha McSally and I have been friends for close to 20 years, and I have a greater respect for her today than I did two days ago [for] being a very strong and wonderful leader. And I think she has handled this situation with a kind of steely grace that typifies Martha McSally,” Wilson said Thursday evening before a screening of “Captain Marvel” at the Smithsonian Air and Space Museum.
About that new film, “Captain Marvel” — our own Marcus Weisgerber saw it at a screening for military families Thursday in Washington. The Air Force played a major production role, including many jets and other references to the service. Brig. Gen. Jeannie Leavitt, commander of the Air Force recruiting service and service’s first female fighter pilot, served as an advisor to filmmakers and Brie Larson, lead actress who plays an F-15 Eagle pilot. “They really wanted to get the character to be an accurate portrayal of a female fighter pilot in the Air Force,” Leavitt said.
Wilson: “It’s a great, inspiring movie about higher, faster and farther—about getting knocked down and getting back up again… It seems to capture about an ethos about what it means to be an airman.”
Spotted: Gen. David Goldfein and his wife Dawn; Maj. Gen. Steven Basham; Thomas Ayres; John Stopher; Brig. Gen. Ed Thomas, and Sen. Lisa Murkowski, R-Alaska.

Border wall from military pay? The White House is considering using “$1 billion in leftover funds from military pay and pension accounts to help President Donald Trump pay for his long-sought border wall,” AP reported Thursday.
Long story short: It comes from funds that aren’t actually being used because recruitment is down. Story, here.

Fashion faux-pas? Do you want to look (kinda, not really at all) like you’re in the military but not actually join? You’re in luck, The New Yorker reports. The headline: “From Grunt Style to ‘Warcore,’ Civilians Are Embracing Military Fashion.”

Private military contractors under scrutiny: Stars and Stripes is up with a new podcast called “Force for Hire” all about the world of military contracting and how it’s shaped the modern battlefield. (h/t @NikkiWentling)

The more you know. “Why Research on Gender and Conflict Matters,” a report on on the complex interaction of gender and conflict, via the folks at the International Crisis Group.
Some of the things you’ll learn:

Venezuela has been hit with widespread power outages reaching 22 of 23 states and “creating chaos as people struggled to navigate their way home,” AP reports from Caracas. “President Nicolas Maduro blasted the outage as an ‘electrical war’ directed by the United States in a statement on Twitter.” Reuters reports much of the country remains “engulfed in darkness” still this morning. That, here.

Algeria was the only major Arab republic that missed the Arab Spring phenomenon — that is until a few weeks ago. Today in Algeria protests are raging as the president tries to extend his already 20-year rule, Reuters reports from the capital. The Atlantic’s Hassan Hassan has a new analysis on why now, and what it means for the wider region, here.

Weekend listening: Our latest Defense One Radio episode with a little bit about hybrid war with Mark Galeotti; a lot about the Pentagon’s new Missile Defense Review and what that review means for Russia and China; as well as what it’s like to get thrown out of a missile defense conference with our own Marcus Weisgerber, Tom Karako of CSIS — here.

Weekend reading: How Emirati and Yemeni forces rescued the American citizen Danny Burch from a criminal gang in northern Yemen. NYTs has the story, here. Also, Mark Hertling, John Kirby, Paul Rieckhoff and others are in the middle of a Twitter thing where you post covers of books on leadership that others should read, then nominate others to do the same, worth perusing.

And finally today, what’s that smell? Soldiers can at last safely, um, do their duty, inside Russia’s new T-14 Armata tanks, Radio Free Liberty / Radio Europe reported Thursday (but The Daily Beast’s Adam Rawnsley summarized so much more succinctly).
The short read: “The designer of a new battle tank that is under development says the latest plans for the armored vehicle include a built-in toilet for its three-person crew.” More jokes here. 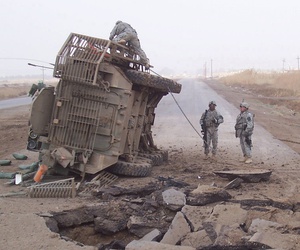 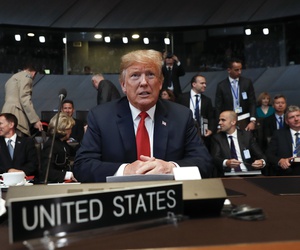 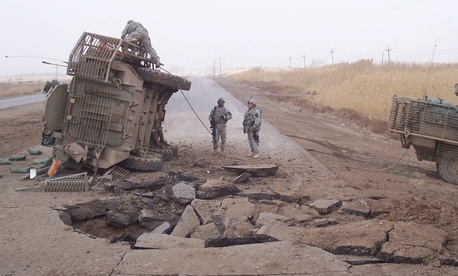 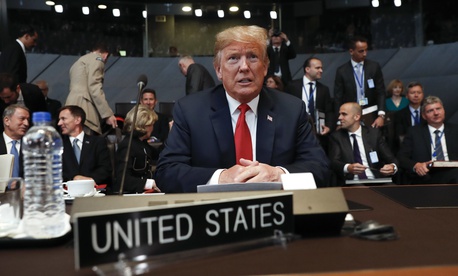