President Trump used his second veto to keep alive U.S. support for the Saudi-led war in Yemen, the White House announced Tuesday afternoon in a statement. The bill Trump vetoed — which would have ended U.S. logistical support to the Saudi-led coalition in Yemen — passed the Senate last month with seven Republican votes, and passed the House in a 247-to-175 vote earlier in April.

Worth noting: The Washington Post reports it was “the first time both chambers had acted to invoke the same war-powers resolution to end U.S. military engagement in a foreign conflict.”

Trump fires back at Congress: “This resolution is an unnecessary, dangerous attempt to weaken my constitutional authorities, endangering the lives of American citizens and brave service members, both today and in the future.”

“Great nations do not fight endless wars,” Trump also said in his statement. But, “Yemen, however, is a different situation,” the New York Times writes of the president’s second veto. “Saudi Arabia remains a staunch ally of the United States, the linchpin of its campaign to isolate Iran, which supports the Houthis in their uprising against the Yemeni government.”

What is Trump’s plan in Yemen? “We cannot end the conflict in Yemen through political documents like S.J. Res. 7.,” he wrote, referring to the vetoed bill. “Peace in Yemen requires a negotiated settlement. Unfortunately, inaction by the Senate has left vacant key diplomatic positions, impeding our ability to engage regional partners in support of the United Nations-led peace process. To help end the conflict, promote humanitarian and commercial access, prevent civilian casualties, enhance efforts to recover American hostages in Yemen, and defeat terrorists that seek to harm the United States, the Senate must act to confirm my nominees for many critical foreign policy positions.”

What “key diplomatic positions” are still vacant? Trump’s is a bold claim, considering he didn’t nominate a U.S. ambassador to Saudi Arabia until November 2018. The Senate confirmed retired Gen. John Abizaid to the post last week. A few other vacancies that apply, according to WaPo’s tracker, could be:

A big fan of the veto: The UAE, which also has lots of troops in Yemen, many of which stand accused of torture by Pulitzer-winning journalists of the Associated Press. “President Trump’s assertion of support to the Arab Coalition in Yemen is a positive signal of US resolve towards America’s allies. Common strategic interests are best served with this clear commitment,” said UAE Foreign Minister Anwar Gargash on Twitter.

Army Secretary Reveals Weapons Wishlist for War with China & Russia // Marcus Weisgerber: Mark Esper says he wants to shift money away from light vehicles and cargo helicopters made for “different conflicts” of the past.

A New Consensus Is Emerging On How to Handle The Risk from China’s 5G // Patrick Tucker: Chinese telecom tech is invading the physical world, but Europeans and industry have strategies to contain the threat.

New VA Whistleblower Protection Office Is Under Investigation for Retaliating Against Whistleblowers // Eric Katz via GovExec: “You don’t want to come forward,” one whistleblower said. “People are afraid.”

Protesters in Sudan and Algeria Have Learned From the Arab Spring // Isma’il Kushkush via The Atlantic: The demonstrations have their own local characteristics, but there are several parallels.

Welcome to this Wednesday edition of The D Brief by Ben Watson with Kevin Baron. Thanks for reading! And if you’re not subscribed, you can do that here. On this day in 1961, the Bay of Pigs invasion of Cuba begins. Lawfare remembers the day, here.

Libya Update: Shells landed near an unused airport in Tripoli overnight, Reuters reports in the latest from Gen. Khalifa Haftar’s efforts to take control of the capital from the UN-backed government. The rockets “killed at least four people and add[ed] to a death toll the United Nations puts at more than 800.” (Unclear who fired the shells.)
Meantime, Italy “has blocked charity boats that rescue migrants in the Mediterranean from docking” at its ports, Reuters writes, “saying the ships are aiding people smugglers and encouraging mass, unregulated immigration.” A bit more to the scene in Tripoli, here.

Sudan’s former president is now in a Khartoum prison, Agence France-Presse reports from the capital city, citing a family source. “The 75-year-old’s whereabouts have been unknown since a military takeover on Thursday,” AFP writes of Omar al-Bashir disappearance.
Not good enough: “The detention of Bashir has failed to pacify protesters, who launched anti-government demonstrations in December and have for days been camped out in front of Khartoum’s army headquarters. Sudan’s military rulers have made some concessions to protesters, including the sacking Tuesday of prosecutor general Omer Ahmed Mohamed, but demonstrators fear their uprising could be hijacked.”
Reminder: Sudan, too, has troops fighting in Yemen; and both Saudi Arabia and UAE (who are fighting in Yemen) “have thrown their support behind the [Sudanese] military,” AFP writes. Tiny bit more, here.

Egypt’s General-turned-President Sisi could soon rule through 2030, France24 reported Tuesday from Cairo, as lawmakers try to over the country’s constitution in his favor. As the Wall Street Journal previewed Monday: “The amendments would extend the presidential term to six years from four, with a two-term limit,” the Journal writes. “They would also grant the president final approval over judicial appointments. The changes would also enshrine the power of the military as protector of the Egyptian state and shield the armed forces from civilian control by granting a council of generals final say over who is appointed as minister of defense.”
Those new amendments will now be “put to a public referendum whose date is to be announced on Wednesday,” France24 writes.
Sisi’s swift ‘power grab’: One journalist, Cairo-based Gregg Carlstrom of the Economist, notes: “Last year it took Egypt 8.5 months to issue my 2018 press accreditation, but apparently organizing a nationwide referendum on a presidential power grab with three days’ notice is no sweat.”
Some very quick history: “Sisi led the army’s overthrow of elected president Mohamed Morsi in 2013 following mass protests against the Islamist leader’s rule. He won his first term as president in 2014 and was re-elected in March 2018 with more than 97 percent of the vote, after standing virtually unopposed. His government has been widely criticised by human rights groups for the repression of political opponents.”
Not to be overlooked: “The vote comes after veteran presidents were ousted both in Algeria and Sudan and amid an escalation of the conflict in Libya.” However, the Journal notes, “There is no sign of protest in Egypt, where security forces have stamped out most rivals to Mr. Sisi, within the ruling military elite, Islamist groups, and liberal and left political opposition.” More behind the paywall, here.

Your #HumpDay #LongRead: “The Dangerous Dregs of ISIS,” by Robin Wright of the New Yorker. “After five years of war with the Islamic State, the biggest problem for the winners is coping with the losers,” Wright reports after visiting a prison at Dashisha, in Syria’s eastern Deir Ezzor province. “The aftermath has produced one of the world’s most perplexing postwar challenges: there are tens of thousands of captured isis members whom no nation wants to repatriate, and the local militia holding them has neither the resources nor the personnel to keep them indefinitely.”
Making things hard: “Just sorting out the fighters’ real names and nationalities has been messy. Few have identity papers or passports.”
Making things worrisome: “ISIS has its roots in an earlier prison culture—notably in Abu Ghraib and Camp Bucca, two infamous prisons in Iraq that were run by the United States between 2003 and 2011.” Read on, here. (Unsolicited plug: For more on ISIS’s prison roots, do yourself a favor and read the excellently reported narrative journalism in Joby Warrick’s Black Flags: The Rise of ISIS.)
Related to that ISIS war: A bunch of “F-15E Strike Eagles Returning Home From OIR Deployment With Unique Nicknames And Nose Arts,” collected and annotated by The Aviationist’s David Cenciotti.

For your eyes only: U.S., British, and French navies practice demining off the Bahrain coast, via AFP.
One more AFP video for the morning: Sweden’s military is training off the island of Gotland. Find that two-minute clip, here. Or read all about Sweden’s Russia-focused training in the Baltic Sea, here.

Back stateside, Elon Musk dropped by NORTHCOM in Colorado Springs on Monday, the command announced in a series of photos the day after. The focus of Musk’s visit: “future space operations and homeland defense innovation.” He even wore a tie.

Satellite images suggest North Korea might be making fuel for its bombs, the Center for Strategic and International Studies said Tuesday off new imagery from Digital Globe dated last week.
What was seen: The movement of “five specialized railcars near [North Korea’s] Uranium Enrichment Facility and Radiochemistry Laboratory” at the Yongbyon nuclear site, Reuters reports.
CSIS explains, “In the past, these specialized railcars appear to have been associated with the movement of radioactive material or reprocessing campaigns. The current activity, along with their configurations, does not rule out their possible involvement in such activity, either before or after a reprocessing campaign.”

This week in national security podcasts: Nuclear guru Joe Cirincione of Ploughshares just launched the “Press the Button” podcast with the goal of “offer[ing] the latest news, insider interviews and in-depth perspectives on issues related to nuclear policy and national security.”
The first guest: Dr. Carol Cohn, founding director of the Consortium on Gender, Security and Human Rights. There is also a segment on the Doomsday Clock, for you old timers who know what that is, and some time “analysis from Ploughshares Fund Program Director Michelle Dover and Roger L. Hale Fellow Catherine Killough.” Listen on Libsyn, here. And read Joe’s frequent columns on Defense One here.

Pakistan’s military blew up a three-story building during a 17-hour gunbattle in Peshawar on Tuesday, AFP reports. “Shafqat Malik, the chief of Peshawar’s bomb disposal squad, told AFP the militants had planted a motorcycle bomb at the gate of the building, and linked it to more than 50 kilograms of explosives throughout the structure. Officers from the bomb disposal squad carried out a controlled detonation of the motorcycle device, Malik said, triggering the explosives inside and bringing the building crashing down.” So far, authorities are not specifying what group of militants was behind the prolonged fight. Continue reading, here.

America’s special operators are getting a new helmet, Military Times reported Tuesday. “That helmet is known as the Integrated Head Protection System… The IHPS also has one hole in its shell for attachments instead of the five in the ECH, which means it offers better ballistic protection. The remaining hole is for the optic, but developers are also working on designs to eliminate the final hole.” More here.
Related: “Beards carry more bacteria than dogs’ fur,” according to a recent study by European Radiology and flagged by The Daily Mail this weekend.

And finally today: Some folks in New York City “Built a (Legal) Facial Recognition Machine for $60,” according to NYT. How they did it: Using “three cameras on the roof of a restaurant,” along with an internet connection and a credit card.
Another thing you’ll learn in that piece: “If you’re an adult in America, there’s more than a 50 percent chance that you’re already in a law enforcement facial recognition database, according to researchers at Georgetown.” Worth the click for the interactive elements alone, over here. 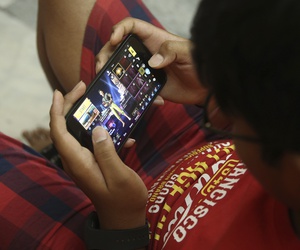 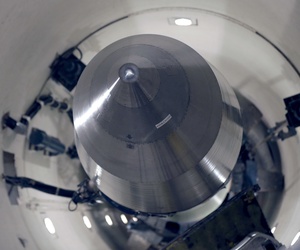 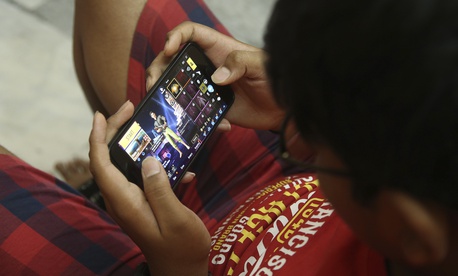 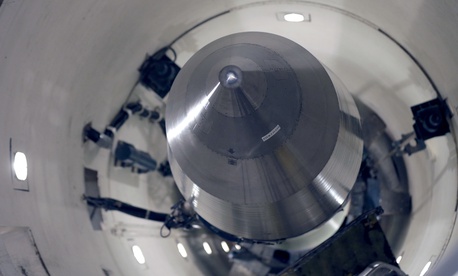