Russia is believed to have probed voting systems in all 50 states in 2016, the Senate intelligence committee said in a heavily redacted 67-page report on their investigation into Russian interference with U.S. elections.

One key detail: “The committee found no evidence of Russian actors attempting to manipulate vote tallies on Election Day, though again the Committee and IC’s insight into this is limited,” lawmakers wrote in their Thursday report.

Another key detail: A “probe” isn’t necessarily an attack, so this doesn’t necessarily add to the Department of Homeland Security’s 2017 finding that Russian hackers actively sought to penetrate 21 states’ election-related systems.

The bigger deal: the Senate committee that has spent the most time looking into foreign interference can’t agree on how to stop it. As Joseph Marks writes in the Washington Post: “The long-awaited 67-page report released yesterday contains dozens of recommendations for securing elections. But most artfully sidestep a boiling policy battle between Republicans and Democrats over whether the federal government should ensure they actually happen.” The GOP members say it’s up to the states; the Democrats say that’s a recipe for letting Russia repeat its work from the 2016 U.S. election.

Related: Sen. Mitch McConnell, R-Ky., blocked two election-security bills on Thursday. The first would have required the use of paper ballots (a common-sense security measure that voting-machine manufacturers actively support) and boosted funding for the Election Assistance Commission. It had already been passed by the House. But the Senate majority leader called it “partisan legislation” and blocked it.

The second bill would have required “candidates, campaign officials and their family members to notify the FBI of assistance offers from foreign governments,” The Hill reported. McConnell blocked it one day after former special counsel Robert Mueller reiterated that Donald Trump’s campaign had failed to notify U.S. law enforcement after Russian agents offered their aid, warned that Russia is currently trying to interfere with upcoming elections, and lamented that American politicians’ acceptance of foreign help — previously seen as a terribly un-American thing to do — would become “the new normal.”

Irate: Sen. Ron Wyden, D-Oregon, an intel committee member, blasted the report in an addendum and tweeted this for good measure: “Russia’s biggest ally in its quest to infiltrate America’s elections again is Mitch McConnell.”

Gen. Hyten to Get His Senate Confirmation Hearing // Katie Bo Williams: His previously uncontroversial nomination to be vice chairman of the Joint Chiefs was thrown into question after a former subordinate accused him of sexual assault.

Boeing: $85B Competition to Build New ICBMs Favors Northrop Grumman // Marcus Weisgerber: The company says it will sit out if the U.S. Air Force does not change the bidding parameters.

The Future of Conflict is Proxy Warfare, Again // Zack Gold and William Rosenau: A new CNA study offers seven lessons from America’s experience with supporting one side from afar.

Welcome to this Friday edition of The D Brief from Bradley Peniston with Ben Watson. If you’re not a D Brief subscriber, sign up here. On this day in 1908, the FBI was born with the stroke of a pen from U.S. Attorney General Charles Bonaparte, the grandnephew of the infamous French emperor.

U.S. to Turkey: Let’s make an S-400 deal. How about you just don’t turn on your fancy new Russian radar, the one that led us to boot you from the F-35 program? Maybe we don’t have to sanction you for buying proscribed Russian defense equipment. Maybe we can open some free trade talks!
That was the deal that Sen. Lindsey Graham, R-S.C., pitched to the Turkish Defense Minister by phone on Wednesday, he told Defense One’s Katie Bo Williams — because President Trump asked him to.
Secretary of State Mike Pompeo soon echoed that plea, telling Bloomberg, “There could be more sanctions to follow but frankly what we’d really like is for the S-400 not to become operational.”
Bloomberg: “Pompeo’s focus on Turkey not making the Russian system ‘operational’ appears to signal a step back from the previous U.S. focus on Ankara not accepting components of the missile defense system and may be an attempt at forging a compromise. Turkey has not yet received the actual missiles for the system.”
Why? Although some in Congress have been pressing Trump to impose sanctions under the CAATSA law, the U.S. president has signaled his reluctance to punish a NATO ally (a reluctance shared by HASC’s Rep. Mac Thornberry, R-Texas), or perhaps just Turkish leader Recip Tayyep Erdogan, an increasingly authoritarian leader whom Trump has praised and hosted at the White House.
Also, why Graham instead of Pompeo or new Defense Secretary Mike Esper or even Central Command’s Gen. Kenneth McKenzie Jr.? “Isn’t this their job?” former Defense Secretary Chuck Hagel said in an email to Defense One.
Also, “just don’t turn it on”? “I guess I’m not seeing how — ‘They buy it, but they don’t turn it on’ — I’m not sure what problem that’s solving,” said Andrew Hunter, at the Center for Strategic and International Studies. Read on, here, and stay tuned.

North Korea’s latest missile tests were “a solemn warning to the south Korean military warmongers,” North Korea’s Kim Jong-un said in a message carried on his state-run KCNA news Thursday (Reuters). He also accused Seoul of “double dealing” by saying it supported reducing military exercises with the U.S. while also welcoming new F-35s to the peninsula and green-lighting drills with the U.S.
Said Kim: South Korea’s president should stop such “suicidal acts” and “should not make a mistake of ignoring the warning” implicit in Thursday’s morning’s launch of two short-range ballistic missiles, which North Korea called “tactical guided missiles.”
By the way: The North also released imagery of the latest two launches later on Thursday, and The Diplomat’s Ankit Panda went straightaway into analysis mode in a Twitter thread you can find here.
Said U.S. Secretary of State Mike Pompeo in an interview with Fox on Thursday: “[Kim] said he’d commit not to conducting nuclear tests, and that he would continue to avoid launching intermediate-range and long-range ballistic missiles. We’re still going to go sit down and have a conversation about this. North Korea has engaged in activity far worse than this. I think this allows the negotiations to go forward. Lots of countries posture before they come to the table.”
Reminder: Pompeo was supposed to visit his North Korean counterpart in Bangkok next week, but that’s reportedly been cancelled by Pyongyang.
Worth noting: Thursday’s launches are believed to have involved the same missile (the KN-23) twice fired in early May; but the missiles this week traveled farther (260 miles and 168 miles in May compared to 267 miles and 428 miles on Thursday; all four reached a peak altitude of 30 miles), according to South Korea’s defense ministry, which called these “a new type of short-range ballistic missile.”

Iran fired a medium-range ballistic missile that traveled about 1,000 km on Wednesday evening, CNN’s Barbara Starr reported Thursday evening on Twitter but apparently not on CNN’s website, sourcing the information to a nameless U.S. defense official.
Iran’s PressTV was quick to relay Starr’s tweet on its website, though, writing “Iran has not yet confirmed the missile test, but has repeatedly said its military might poses no threat to other countries, and that its defense doctrine is based on deterrence.”
The missile in question is allegedly the Shahab-3, which the Center for Strategic and International Studies writes was built off a similar North Korean missile acquired from Pyongyang in the 90s. Its range is believed to be about 1,300 km — which would include Israel and a good number of U.S. military staging areas throughout the Middle East.

One week ago, CENTCOM announced a new operation it called Sentinel, whose mission would be “to promote maritime stability, ensure safe passage, and de-escalate tensions in international waters throughout the Arabian Gulf, Strait of Hormuz, the Bab el-Mandeb Strait and the Gulf of Oman.” CENTCOM, in its statement, promised to “continue to coordinate with allies and partners in Europe, Asia, and the Middle East on the details and capabilities required for Operation Sentinel to enable freedom of navigation in the region and protect vital shipping lanes.”
Six days later, that is yesterday, CENTCOM “hosted an international meeting” on the new operation at MacDill Air Force Base in Tampa, The National’s Joyce Karam reported Thursday.
Who attended? CENTCOM declined to be specific aside from informing Karam it involved “the UAE among other countries, including Britain and European nations.”
Little else is known from that meeting Thursday, but we’re likely to learn more next week — especially since new Defense Secretary Mark Esper has a CENTCOM visit already slated for that week (precise day unknown). A bit more from The National, here, or from Esper’s Wednesday morning remarks to reporters at the Defense Department, here.

At least 15 people were killed in three separate attacks from ISIS and the Taliban in Kabul on Thursday. “Eight employees of the ministry of mines and petroleum were killed and 27 wounded in an attack on their bus,” then minutes later, “a suicide bomber blew himself up a few meters away, killing at least seven people and wounding 20,” according to al-Jazeera. ISIS claimed responsibilities for those two attacks.
The third attack appears to have been from a car bomb, and the Taliban claimed that one. “Zabihullah Mujahid, the Taliban spokesman, said nine foreign forces were killed in the car bomb attack and two vehicles destroyed, but government officials did not confirm the Taliban claim,” AJ writes.
There was a lot more violence across Afghanistan this week, and AJ rolls up more than you’d probably care to read about it all in the rest of their report, here.
BTW: U.S. Joint Chiefs Chairman Gen. Joe Dunford visited Afghan President Ashraf Ghani on Thursday in Kabul, the Joint Staff announced days after President Trump rattled Ghani’s office with remarks about choosing not to kill 10 million people in an effort to end the war more quickly.
The last line of that DOD report on Dunford’s visit: “Afghanistan is a complicated area, with very few easy decisions, [an anonymous coalition] official said.”

Dunford’s replacement — Gen. Mark Milley — was finally confirmed by the Senate in an 89-1 vote on Thursday. Read a tiny bit more on Milley from Defense News, here.

And finally this week: U.S. Africa Command got a new leader today when U.S. Army Gen. Stephen Townsend took over shortly before the sun came up on America’s east coast. Find video of that change-of-command ceremony on AFRICOM’s Twitter feed today, here. And here’s Stars and Stripes with a bit more on Townsend’s background and history. 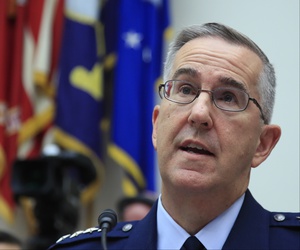 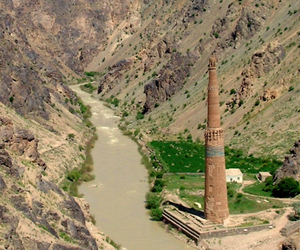 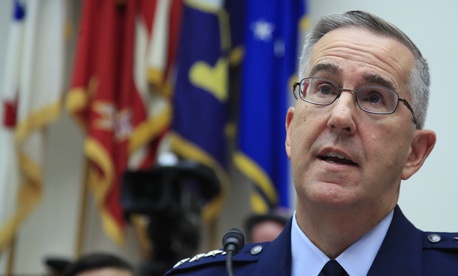 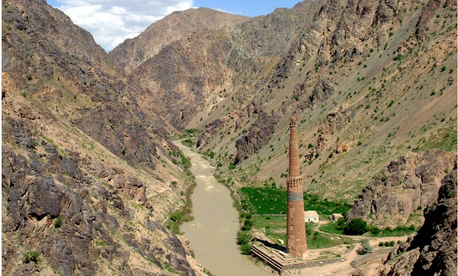