Welcome to the post-INF world. On Sunday, a missile shot from its trailer-mounted launcher on a West Coast naval facility, traveled farther than any ground-launched U.S. cruise missile had in a quarter-century, and put an exclamation point on the United States’ Aug. 2 withdrawal from the Intermediate-Range Nuclear Forces Treaty.
DoD announced the test in a terse Monday press release: “On Aug. 18, at 2:30 p.m. Pacific Daylight Time, the Defense Department conducted a flight test of a conventionally configured ground-launched cruise missile at San Nicolas Island, Calif. The test missile exited its ground mobile launcher and accurately impacted its target after more than 500 kilometers of flight. Data collected and lessons learned from this test will inform DOD’s development of future intermediate-range capabilities.”
See a photo and watch a video, via the U.S. Department of Defense, here.
The missile was a “variant of the Tomahawk Land Attack Cruise Missile,” Air Force Lt. Col. Robert Carver, a DoD spokesman, told Military.com. The test was executed by the U.S. Navy and DoD’s Strategic Capabilities Office.
Russia was quick to denounce the test. “All this elicits regret. The United States has obviously taken the course of escalating military tensions. We will not succumb to provocations,” Russian Deputy Foreign Minister Sergei Ryabkov said, via Reuters. “We won’t allow ourselves to be pulled into a costly arms race.” (U.S. officials say Russia has been in violation of the treaty since at least 2014, when it first test-flew a 9M729 cruise missile past 500 kilometers.)
China also shook its finger, though presumably without pausing its own energetic production of intermediate-range missiles. “We advise the U.S. side to abandon outdated notions of Cold War thinking and zero sum games, and exercise restraint in developing arms,” Chinese Foreign Ministry spokesman Geng Shuang told a daily news briefing.
The upgraded TLAM is far from the only post-INF weapon aborning in the American arsenal. “The Army has also been tiptoeing up to the 500-km limit as it develops a next-generation artillery weapon called the Precision Strike Missile,” one of your D Briefers wrote Monday. “Dubbed the PrSM for short, it is intended as a longer-ranged replacement for the missiles currently fired by the Army’s  M270A1 Multiple Launch Rocket System, or MLRS, and the M142 High Mobility Artillery Rocket System, or HIMARS. So far, the PrSM has an official range of 499 kilometers. That’s because missiles with longer ranges — between 500 and 5,500 kilometers — were deemed in the 1980s to be so dangerous and destabilizing that the United States and Russia came together to ban them in the Intermediate-Range Nuclear Forces Treaty.” A bit more, here.
Flashback to January, when Trump administration officials were declaring their intention to withdraw from INF and allow a new arms race to commence.

Meanwhile: Russia quieted four nuke-monitoring stations. The stream of radiation-sensor data that normally flows from stations in the towns of Bilibino and Zalesovo stopped without explanation on Aug. 13, five days after an explosion at a missile-test site in far northwestern Russia, says Lassina Zerbo, the executive director of the Comprehensive Nuclear Test Ban Organization. Now two more such stations have gone quiet, the Wall Street Journal reports, “heightening concerns among observers that Russia is attempting to conceal evidence from this month.”
Said Jeffrey Lewis of the James Martin Center for Nonproliferation Studies, on Twitter Monday: “Two more stations are now offline — and not just any two.  This time it is a pair of radionuclide stations in the path of the drifting plume. I’d say we are out of coincidence territory.”
Update: Two of the four monitor sites are back online, CNN’s Barbara Starr relayed this morning from the Twittersphere.
And Russia, to the Vienna-based CNTBO: Our test accident is none of your business. Reuters reports.

The US Just Launched a Long-Outlawed Missile. Welcome to the Post-INF World // Bradley Peniston: Sunday’s test sent a ground-launched missile more than 500 kilometers, a test that would have been illegal last month.

Defense One Radio, Ep. 53 // Ben Watson: Civilian casualty reporting and the war on ISIS with Alexa O’Brien and Chris Woods.

DARPA Wants AI to Help Make Weapons More Hacker-Proof // Jack Corrigan, Nextgov: Artificial intelligence might speed up the design of arms and other network-connected platforms — and suggest improvement that humans haven’t yet conceived.

The US Army Is Struggling to Staff Its Cyber Units: GAO // Jack Corrigan: Congress’ watchdog concluded that the Army launched its new cyber units before trying to determine whether the concept is affordable, supportable, and sustainable.

It Matters Whether Americans Call Afghanistan a Defeat // Jim Golby and Peter Feaver, The Atlantic: The public’s judgment about whether the United States won or lost the war will affect civilian-military relations for years to come.

Welcome to this Tuesday edition of The D Brief from Ben Watson and Bradley Peniston. If you’re not a D Brief subscriber, sign up here. On this day in 1910, the first gunshot from an airplane was fired by U.S. Army Lt. Jacob E. Fickel’s Springfield Model 1903 .30-‘06 above Sheepshead Bay race track near New York City.

The U.S. and South Korean militaries end nearly two weeks of joint exercises today, Yonhap News Agency reports in a move that “rais[es] hopes for a halt in a series of missile launches by North Korea and a possible resumption of nuclear talks between Washington and Pyongyang.”
For the record: “No more major combine exercises are scheduled for this year between Seoul and Washington, except for small-scale ones between or among units,” Yonhap writes. Read on for more on how these recent August drills were downgraded.
Due in Seoul today: Stephen Biegun, U.S. Special Representative for North Korea, in town for a three-day visit after two days spent meeting with officials in Japan.
Also happening in Seoul today: Planning for the next round of defense cost-sharing talks with Timothy Betts, the White House’s top negotiator for these matters, and his RoK counterpart, Chang Won-sam.
Recall that under the most recent agreement, “Seoul agreed to pay 1.04 trillion won (US$861.8 million), an increase of 8.2 percent from the previous year,” Yonhap reports. And that deal is set to expire on January 1, 2020.
What’s next? Too soon to know, but Yonhap writes that last month, U.S. officials “tentatively decided to request that Seoul pay US$5 billion to support the USFK for next year, [which would be] more than a fivefold increase from this year.”
And for what it’s worth, South Korea and Japan’s foreign ministers are headed to Beijing today for three days of talks, not that anyone is expecting any significant breakthroughs. A bit more to that, via Reuters, here.

Twenty-three small Texas towns have been hit in coordinated ransomware attacks from “one single threat actor,” according to a statement from the Texas Department of Information Resources and reported today by the New York Times. The names of the cities and extent of the ransoms have not been publicly released.
Harbinger of things to come? “If this turns out to be a new phase — because bad guys love to copycat each other — we’re going to see a continued acceleration of these kinds of attacks,” said Allan Liska, an analyst with the cybersecurity firm Recorded Future.
Should ransomware attacks hit your city, the Times writes, officials basically have three choices: “The first is to pay the ransom,” the “second option is to restore data from backup files,” and the third is to start over from scratch. Read on, here.

Huawei, the Chinese tech firm with legendarily poor security practices, just got a 90-day lifeline from the Trump administration, the Wall Street Journal reports. The quick read: “The Trump administration agreed Monday to allow some U.S. companies another 90 days to continue doing business with Huawei Technologies Co., a move it said would help small rural telecom carriers dependent on Huawei gear.”
That small, rural telecom community is believed to include “about 40 mostly rural U.S. cellphone carriers and cable operators” totalling “less than 1% of equipment used by U.S. telecom networks.”
Also on Monday, the Commerce Department added another 46 Huawei affiliates to its blacklisted entity list. Tiny bit more on those Commerce additions, via TechCrunch, here.
Huawei’s reax: These are “politically motivated” additions that “does not change the fact that Huawei has been treated unjustly.” More from the Journal, here.
ICYMI: Read an in-depth report about Huawei equipment vulnerabilities in this June analysis from the cybersecurity firm, Finite State. Or catch our Defense One Radio episode featuring an interview with Finite State CEO Matt Wyckhouse, here.

The Philippines’ Duterte is trying to talk tough to China’s navy, which has sent warships “within the country’s 12-mile territorial sea, at various locations in the archipelago” this year, Reuters reports today from Manila.
Bigger picture: “Duterte faces critics at home who accuse him of being passive over Chinese provocations in exchange for business ties with Beijing, though promised investments have been slow in coming.”
The Philippines president is off to China next week, where — with Xi Jinping — Duterte promised to discuss a key 2016 South China Sea ruling that China has rejected.
BTW: Get to better know tensions around the South China Sea, as well as how China’s Communist Party leadership is trying to think years ahead when it comes to global influence campaigns in our February two-part podcast series, “Beyond South China Sea tensions,” here (part one) and here (part two).

About 90 days before his retirement, Pakistan’s army chief gets a three-year extension, Dawn reported Monday. (Extending the army chief’s term has happened once before in the past decade, and that was for Gen Ashfaq Parvez Kayani back in 2010.)
The man in question: Gen. Qamar Javed Bajwa, a graduate of Canada’s Command and Staff College in Toronto, and the United States’ Naval Post Graduate University in Monterey, Calif.
His “term was extended because of the Kashmir situation, the regional security environment, and the need to take forward the Afghanistan peace process,” the Wall Street Journal reports, citing Pakistan’s foreign minister. Tiny bit more, here; but more in Dawn, here.

In Yemen, fighting between separatists and the Saudi-backed government have begun again in Aden, Reuters reports. In short, despite requests from the UN and officials in Riyadh, “The separatists’ seizure of two more government bases [40 miles east of Aden] in Abyan province, the birthplace of Yemen’s President Abd-Rabbu Mansour Hadi, suggested they were not planning to back down.”
The 30,000-foot view: “Divisions have spread with the overall war — which is widely seen as a proxy conflict between Sunni Muslim power Saudi Arabia and Shi’ite power Iran — largely stuck in stalemate.” More, including word of additional Saudi airstrikes on the Houthi-held Yemeni capital of Sana’a, as well as more reported Houthi drone attacks on Saudi infrastructure north of the border, here.

If America’s Middle Eastern allies buy Chinese or Russian weapons that “threaten the operational security of [U.S.] weapons, we will have no choice but to pull ours,” Mick Mulroy, deputy assistant secretary of defense for the Middle East, told al-Monitor on Monday.
Said Mulroy of China: “The United States is not destined to be China’s adversary, but we do see Chinese leaders choosing to challenge the global order that is based on values shared by the United States and our partners and allies.” Read on, here.

And finally today: Is the Navy torpedoing Trump’s chances in 2020 by not delivering a 355-ship plan? Conservative commentator Hugh Hewitt took to the op-ed pages of the Washington Post this weekend to argue that point, using the key states of Michigan, Pennsylvania and Wisconsin as prizes to be won from this plan — or states to be lost because such a plan is not materializing fast enough for Trump. 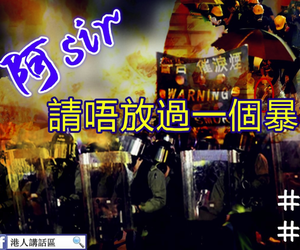 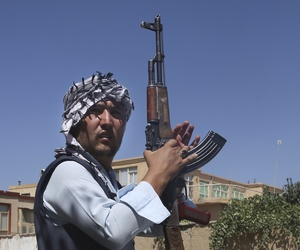 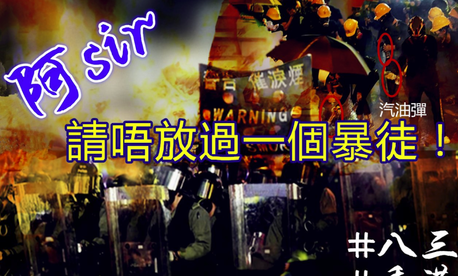 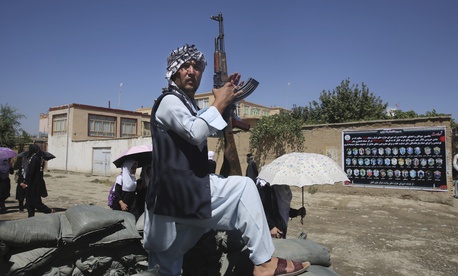