The U.S. retreat from Syria continues, with growing reservations from the military and second thoughts in the White House. American forces in northeastern Syria are crossing into Iraq today, even as Defense Secretary Mark Esper talks about putting troops back in the region “to secure oil fields and continue the fight against Islamic State militants,” the Associated Press reports, traveling with Esper in Kabul, Afghanistan.

The U.S. might leave as many as 200 troops in eastern Syria for those tasks, an option that “was being discussed among top American policymakers and commanders” this weekend, the New York Times reported Sunday evening

The “cease-fire” appears to be going poorly. This morning brought new charges from Kurdish officials and Turks that the other side continues to violate the Thursday deal. According to Turkey’s foreign minister, the Kurds have violated it 30 times. The Kurds don’t appear to be counting; they are just asking “for an international mechanism to protect Kurdish civilians who want to stay in their towns after Kurdish-led fighters leave.”

AP reported Friday those words “seemed disconnected from any known development there,” that is, in the Middle East. Still, AP reported, POTUS45 “made the assertion twice Friday, but other U.S. officials were unable to explain what he meant.”

Trump said Esper had been talking about the oil. But reporters traveling with Esper never heard that from the Pentagon chief, WSJ’s Nancy Youseff and Reuters’ Phil Stewart tweeted after Esper made his appearance.

Sen. Lindsey Graham, R.-S.C., tried to explain Trump’s oil remarks in an interview with Fox on Sunday. Said Graham to Maria Bartiromo: “I see a way forward now that really, quite frankly, is historic, historic security for Turkey, historic security for the Kurds. A plan to keep ISIS down and out forever, and a chance to keep the oil fields in the hands of our allies, not our enemies, would be a hell of an outcome, and I think that’s now possible.” Noted Bartiromo: “This is completely different than what you have been saying all [last] week.”

But Graham wasn’t done explaining an entirely new plan for the U.S. military in Syria, telling Fox, “The big thing for me is the oil fields. President Trump is thinking outside the box. I was so impressed with his thinking about the oil. Not only are we going to deny the oil fields falling into Iranian hands. I believe we’re on the verge of a joint venture between us and the Syrian Democratic Forces, who helped destroy ISIS and keep them destroyed, to modernize the oil fields and make sure they get the revenue, not the Iranians, not Assad. And it can help pay for our small commitment in the future. And protecting Israel is the number one objective. And we can do all of that with a very small force.” Find the full transcript from Fox, here.

So, to review this new plan: The U.S.“is looking to launch a joint venture with the Kurdish forces in Syria and run the oil fields together,” and also “wants a DMZ between Turkey and Kurds, patrolled by international forces, with U.S. air support,” the Wall Street Journal’s Dion Nissenbaum tweeted in summary, perhaps for posterity above all.

A one-word assessment from Aaron Stein of the Foreign Policy Research Institute: “Delusional.”

More on Syria developments, after the jump.

Top SDF Commander: Turkey Blocking Kurds’ Retreat; Urges Trump to ‘Stop This War’ // Kevin Baron and Gayle Tzemach Lemmon: “I am asking President Trump right now to fulfill his promise to us and stop this war,” Mazlum Abdi told Defense One by phone.

US Intel Aircraft to Remain Over Syria As Ground Forces Pull Out // Marcus Weisgerber: SecDef Esper heads to Mideast, NATO to talk about the future fight against ISIS.

Defense One Radio, Ep. 57: The Future of the U.S. Military in Syria (for now) // Ben Watson: Three Middle East experts forecast likely consequences and the longterm costs of the U.S. military withdrawing from northern Syria.

10 Hard Realities of America’s Next Syria Policy // Christopher J. Bolan: The troops are leaving, but the U.S. still has regional and global interests in what happens there.

The US Army Wants to Reinvent Tank Warfare with AI // Patrick Tucker: A new project aims to make the battlefield more “transparent” — while relying on robots and software that “think” in unpredictable ways.

Just One Bidder Is Vying for Two Pentagon Programs Worth $130 Billion // Marcus Weisgerber: The defense acquisition chief is looking into the Army’s disqualification of a second bidder to replace Bradley armored vehicles.

What the US Can Learn From Iranian Warfare // Brian Katz, The Atlantic: Tehran’s approach to proxy wars offers a surprising lesson.

Welcome to this Monday edition of The D Brief from Ben Watson and Bradley Peniston. If you’re not already subscribed, you can do that here. On this day in 1947, Northrop’s prototype YB-49 aircraft (predecessor to the B-2) made its first flight. The program would be cancelled two years later after a series of fatal crashes.

The U.S. retreat from NE Syria is happening under a hail of rocks and vegetables, AP reports separately off social media videos from the region. (Here’s video of that. And here’s more video of tomatoes and stones. More here; and more still, here.) For example, in the city of Qamishli, “People in the street hurled potatoes at the [departing U.S. military] vehicles, shouting, ‘No America,’ and ‘America liar,’ in English. ‘Like rats, America is running away.’”
On the other hand, here’s a more peaceful video from Agence France-Presse showing “more than 70 US armoured vehicles escorted by helicopters driv[ing] past the town of Tal Tamr.” But protestors also showed up in that city, including one with a sign reading, “Thanks for US people, but Trump betrayed us,” AP writes.
Otherwise, and in accordance with that U.S.-Turkey agreement forged Thursday, “Kurdish forces on Sunday pulled back from the border town of Ras al-Ayn on Sunday, paving the way for Turkish troops deployment in the area,” AP reports, reminding readers that, “Under the deal, the Kurds are to withdraw from a stretch of territory 120 kilometers (75 miles) along the border and 30 kilometers (19 miles) deep.”
President Trump tweeted a quote from his defense secretary this weekend, and humorously misspelled Mark Esper’s name — which was all Politico’s Dave Brown needed to start quoting Eagles lyrics on Twitter. (Trump corrected his tweet about two hours later.) What the president’s tweet said: “The ceasefire is holding up very nicely. There are some minor skirmishes that have ended quickly. New areas being resettled with Kurds. U.S. soldiers are not in combat or ceasefire zone. We have secured the Oil,” Trump said Esper told him.
NATO’s Jens Stoltenberg tried to give the U.S.-Turkey ceasefire some positive momentum on Friday in a press conference with U.S. State Secretary Mike Pompeo, telling reporters he welcomed the ceasefire agreement between “two NATO allies.”
Coming soon: SecDef Esper is due to meet with Stoltenberg and other NATO officials later this week in Brussels. Around that time, Turkish President Recep Erdogan will meet with Russian President Vladimir Putin.
Also possibly coming soon: An official renewal of Turkey’s offensive, since tomorrow (Tuesday, October 21) is day five of the five-day agreement signed Thursday.
In perspective: “I am a Kurd from northern Syria and I have been photographing this country’s war for years,” begins a moving essay this weekend from Delil Souleiman of AFP. That’s actually the second paragraph. The first one is much more brutal and gut-wrenching.
He continues, “There was even a time when I actually thought there was a bit of justice in this world. It was whenever I would photograph women fighting the Islamic State jihadists. Some of these women had been IS slaves and now they were facing and defeating them on the battlefield. It seemed just. But I was wrong and hasty. The past few weeks have turned our world upside down.” Read the rest, here.
Parting shot: Don’t miss this image of U.S. forces leaving Syria, taken by Souleiman’s lens.

The U.S. has already removed 2,000 of its troops from Afghanistan over the past year, despite no peace deal with the Taliban, Gen. Scott Miller told reporters traveling with Defense Secretary Esper in Kabul. That puts the current Afghan-deployed total for the Pentagon at about 12,000 the New York Times reports. And if things stay on the current course, “the eventual [U.S.] force size could drop to as low as 8,600 — roughly the size of an initial reduction envisioned in a draft agreement with the Taliban before Mr. Trump halted peace talks last month.”
What’s going on: “Rather than a formal withdrawal order, they are reducing the force through a gradual process of not replacing troops as they cycle out,” U.S. and Afghan officials told the Times. Read on, here.
FWIW: One day after this photo in the White House, Joint Chiefs Chairman Gen. Mark Milley was photographed in more pleasant times shaking hands with America’s Afghan peace talks envoy, Zalmay Khalilzad.

The U.S. is cyberattacking Iran to slow its military’s escalation in the region, al-Monitor’s Jack Detsch reported Saturday.

Protesters climbed over the wall of U.S. Ambassador Harry Harris’s residence in Seoul and shared photos on Facebook of themselves holding signs with phrases like “Harris leave this land,” AFP reported Friday. Once police restored order, 17 students had been arrested. “They said they were protesting against Washington’s demands that Seoul increase its contribution to the cost of defending the South.”

Trump’s business interests shape his decisions, says acting White House chief of staff. Trump “still considers himself to be in the hospitality business,” Mike Mulvaney told Fox News on Sunday. Mulvaney was attempting to defend the president’s Thursday announcement that June’s meeting of the leaders of the world’s top economies would be held at his struggling Miami golf resort. Trump changed his mind in a Saturday tweet after GOP lawmakers objected to his use of public office for private gain.
Many of those interests are in foreign countries. Mulvaney’s declaration spotlights enduring questions about the national-security implications of the U.S. president’s many foreign investments, including Turkey. Defense One compiled a list, here.

ICYMI: Friday news dump: The U.S. State Department’s probe of Hillary Clinton emails is over after having found “no deliberate mishandling of classified information,” the Washington Post reported late Friday.

And lastly today: An exoskeleton has given a paralyzed man the ability to walk again, and it’s doing so via two sensors implanted into his brain, MIT’s Technology Review reported this weekend.
And: Some Swedes are testing a device implanted into their hands which functions as their ID, wallet and keys. NBC News has the story from October 13, here. 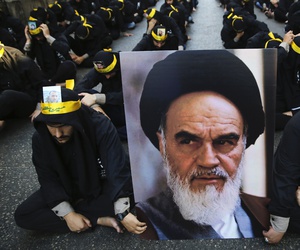 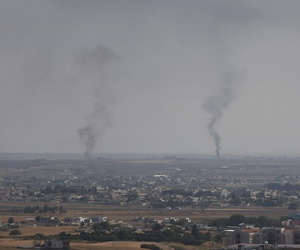 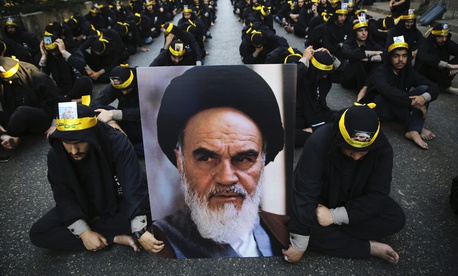 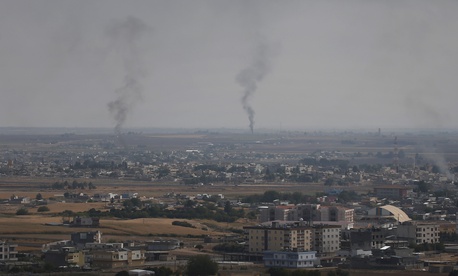