It’s been two days since the leader of ISIS was killed in a daring U.S.-led raid in northwestern Syria, and still no one expects the group to abandon its presence in more than 20 countries around the world. “Our job is to stay on top of that and to make sure that we continue to take out their leadership,” U.S. Defense Secretary Mark Esper told ABC’s “This Week” on Sunday.

“This puts the enemy on its heels, but the ideology — and this sounds so clichéd — it is not dead,” Chris Costa, a former senior director for counterterrorism for the National Security Council, told the Associated Press.

Afghanistan officials say they’re “expect[ing] an increase in surrenders” from ISIS affiliates in that country, what the group called its Khorasan province, Reuters reports today from Kabul.

But at least one Afghan member of ISIS said not so fast, telling Reuters: “Let’s say [deceased ISIS leader Abu Bakr al-Baghdadi] was killed, it wouldn’t matter. Our struggle is not for Baghdadi, our struggle against the infidels is for Allah.”

The Philippines, Indonesia, and Malaysia are all bracing for retaliatory and so-called “lone wolf” attacks from ISIS sympathizers and followers, Reuters reports separately today from the cities of Manila and Kuala Lumpur.

“This is a many-headed monster,” said Australian Prime Minister Scott Morrison. “As you cut one off, another one inevitably arises.”

The ISIS affiliate in Nigeria, formerly known as Boko Haram, remains “one of the biggest extremist threats in Africa,” the New York Times reminded readers Sunday.

And in both Somalia and Libya this month, the U.S. military carried out airstrikes against ISIS affiliates as a spokesman for U.S. Africa Command said Friday (Voice of America) that combatant command is worried Libya could still “become a laboratory for ISIS.”

Get a better glimpse at where ISIS affiliates are located in this table assembled by analysts at the Institute for the Study of War and shared Sunday evening by ISW’s Jennifer Carafella.

Word of warning from extremism scholar and analyst Seth Jones of the Center for Strategic and International Studies: “Great news that Baghdadi is dead. But how much triumphalism did we hear after Baghdadi’s predecessor, Abu Musab al-Zarqawi, was killed? President Bush called it a ‘severe blow.’ Wrong! The group became even stronger after Zarqawi’s death.”

And to that point: “Despite nearly two decades of U.S.-led counterterrorism operations, there are nearly four times as many Sunni Islamic militants today as there were on September 11, 2001,” Jones and his colleagues Danika Newlee and Nicholas Herrington wrote just a few short months ago for CSIS.

Russian officials were alerted before the raid, Trump said, to deconflict airspace. (Moscow responded by saying, in Reuters’ words, that “it did not have any reliable information about the U.S. operation and cit[ed] four reasons why the U.S. version of events looked suspicious.”)

FWIW: Some current and former special operators told Politico they were surprised at the level of operational detail revealed by Trump in his Sunday morning press conference, and say it could make future missions harder or more dangerous. More on Syria below the fold…

US Troops, Armor Will ‘Secure’ Oil Fields in Syria, Says SecDef in New Reversal // Katie Bo Williams: The U.S. might also maintain “one of our two airfields that are there,” said America’s envoy to Syria to lawmakers.

$85B Nuclear Missile Competition Gets Messier as Feds Investigate Northrop // Marcus Weisgerber: Boeing is breaking up its ICBM team — just as the Federal Trade Commission begins looking into the company’s allegations that Northrop wasn’t playing fair.

What Was the Point of the Syria ‘Withdrawal’? // Kathy Gilsinan: Donald Trump, who vowed to get troops out of Syria altogether, incurred all the strategic costs without getting any of the political benefit.

Welcome to this Monday edition of The D Brief from Ben Watson with Bradley Peniston. If you’re not already subscribed, you can do that here. On this day in 1664, the British Royal Marines was formally established for the sharp-shooting purposes of picking off enemy sailors manning heavy guns on the increasingly sophisticated battleships of the day. (Related trivia: Sixteen years earlier, the Swedes had built the biggest and baddest warship of the time, the Vasa, with an impressive two gun decks for 64 different cannons. However, just 20 minutes out to sea on her maiden voyage, the top-heavy Vasa was felled by winds and those gun decks took in water, sinking the warship just outside of modern-day Stockholm harbor.)

Syrian Kurds say they killed al-Baghdadi’s spokesman in a joint operation with American forces on Sunday, AP reports today from Beirut. The man was named Abu Hassan al-Muhajir, and he’s believed to have been killed possibly by a U.S. airstrike “in a village near Jarablus, a town in northwestern Syria.”
If true, the death of al-Muhajir is particularly notable, because it reportedly happened while he was “travelling in a convoy made up of an oil tanker and a sedan,” AP writes, adding, “The bodies of those killed in the attack were charred and it wasn’t immediately clear how the al-Muhajir’s identity could have been confirmed.” (Here’s video and imagery purporting to show the scene of the crime assembled by the BBC’s Riam Dalati.)
Otherwise in Syria, Kurdish forces say they’re finally leaving the Turkish border area, which is welcome news to Damascus officials’ ears because they say now Turkey’s military can finally cease its offensive — or as state news SANA described it, Turkey’s “pretext for flagrant Turkish aggression on [Syrian] territory,” Reuters reports. Also worth noting from that report: SANA alleged Turkey’s forces were fighting Syria’s regime forces near the city of Ras al-Ain, on the Turkish border; that’s something Reuters writes “Turkey did not immediately confirm.”
Meantime, Turkish officials are eagerly awaiting the next deadline in a joint Turkey-Russia deal to co-patrol the border region once Kurds completely leave. That deadline is tomorrow. Reuters writes “The joint patrols are to run from the Euphrates River in the west to the Iraq border in the east, except for the Kurdish-controlled city of Qamishli.”

Oh, and President Trump’s campaign pledge to take control of Syrian oil fields? He reconfirmed that is indeed still his plan in remarks Sunday morning after the Baghdadi raid, the Washington Post reports. “We’re protecting the oil, we’re securing the oil,” he said Sunday. And that, he added, “can help us because we should be able to take some, also.”
“The war crime of pillage is almost as old as the laws of war,” Ryan Goodman, a professor at the New York University School of Law who once served as special counsel to the general counsel of the Defense Department, told the Post. “Most infamously, the Nuremberg tribunal after World War II saw Germans convicted of the war crime of seizing oil in Eastern Europe.”
FWIW: Russia’s military called the plan “banditry” in public remarks Saturday, AP reported. The more complete quote: “What Washington is doing now, the seizure and control of oil fields in eastern Syria under its armed control, is, quite simply, international state banditry,” Russian Foreign Ministry spokesman Maj. Gen. Igor Konashenkov said. “All hydrocarbon deposits and other minerals located on the territory of Syria do not belong to the IS terrorists, and even less to the ‘American defenders from IS terrorists,’ but exclusively to the Syrian Arab Republic.”And then that Russian military spox lectured the U.S. on ideals, adding, “The real cause of this illegal action by the United States in Syria lies far from the ideals that Washington has proclaimed and from the slogans of fighting terrorism.” More — including some experts’ skepticism that this “take the oil” plan from Trump will ever fully materialize — from the NYTs, here.

U.S. Navy now eyeing future fleet of 305 to 310 ships. It’s been a few years since service officials last uttered a full-throated defense of its official goal of a 355-warship fleet, and they keep getting closer to admitting that it’s not going to happen. Unless the Navy budget gets a lot more money in the next five years, “we can keep around 305 to 310 ships whole — properly manned, properly maintained, properly equipped,” Navy vice chief Adm. Robert Burke told reporters today. Having 355 ships “is a great target for us, it’s more important that we have the maximum capability to address every challenge that we might face.” (Breaking Defense)
The fleet currently stands at 290 “deployable battle force ships,” according to the ever-helpful Status of the Navy page.

Bye, bye, Open Skies? Sometimes a U.S. president signs a document warning he might do a certain thing. This week, the Wall Street Journal reported Sunday, it’s President Trump and the 27-year-old Open Skies treaty, that “permits each state-party to conduct short-notice, unarmed, reconnaissance flights over the others’ entire territories to collect data on military forces and activities,” according to the Arms Control Association.
It’s not clear why now. “Some Republicans, including Cotton and House Armed Services Committee chairman Mac Thornberry, R-Texas, see the deal as outdated and disadvantageous to the United States,” Defense One’s Katie Bo Williams reported last week. But plenty of other Republicans, Democrats, and national-security practitioners recognize the treaty’s benefits, including as a way to help out allies unblessed with multibillion-dollar constellations of spy satellites.
Trump’s pick for U.S. Strategic Command declined to endorse a withdrawal at his confirmation hearing last week.
ICYMI: Here’s a fuller look at the Open Skies Treaty from Defense One’s Patrick Tucker.

And lastly today: USAF’s secret space plane lands after two years. The X-37B ended its fifth mission on Sunday after 780 days in orbit, breaking its own record for a reusable space vehicle, the Air Force said in a statement. Still no word about what it’s doing up there — beyond proving that it can do it for a really long time. 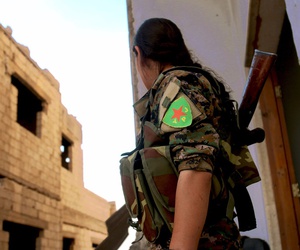 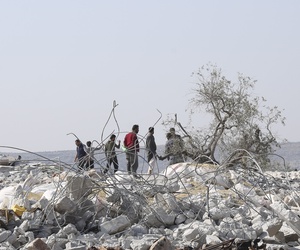 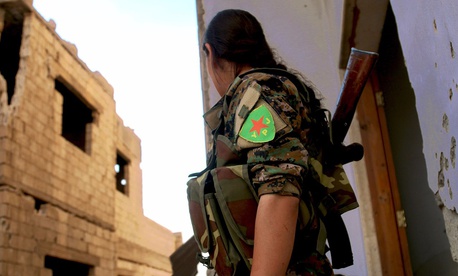 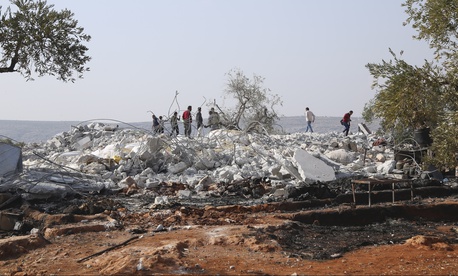