Turkey has begun deporting ISIS fighters back to NATO allies, including one to the U.S. already, and a few others headed to Germany and Denmark later today, according to Interior Ministry spokesman Ismail Catakli.

Up next: Nine more German nationals, two from Ireland, and 11 from France, the Associated Press reports.

Overall, Turkey is believed to have “nearly 1,200 foreign members of IS in custody,” Agence France-Presse reports off remarks last week from Turkish Interior Minister Suleyman Soylu. Turkey’s military and allied rebels are also believed to have “captured 287 during its recent operation in northern Syria.”

A note on timing. “While Turkey has quietly deported IS sympathizers for years,” AP writes, Turkish President Recep Erdogan “raised the issue more forcefully after Western nations refused to back [Turkey’s] invasion of northeastern Syria and its offensive against Syrian Kurdish fighters, whom Ankara considers terrorists linked to Kurdish insurgents fighting inside Turkey.”

For its part, Reuters adds, “Turkey has accused Western countries, especially in Europe, of being too slow to take back citizens who travelled to the Middle East to fight on behalf of the militant group.” Instead, AP writes, “Several European countries, including Britain [as well as Germany and Denmark], have stripped IS fighters of their nationalities, to prevent their return.”

Said one French foreign ministry source to AFP: You have an incomplete picture of what we’ve done behind the scenes. Or, more literally, “Jihadists and their families are regularly sent back to France and arrested as they leave the airplane. Most of the time it is done secretly. The news is not published, or [is] released much later.”

Germany says Turkey hasn’t given a heads-up about exactly who is coming, Reuters reports separately this morning from Berlin. AP reports the foreign ministry is anticipating the group to consist of three men, five women and two children. But “in the case of the person being deported Monday, [German officials so far] know of no link to IS.”

Meanwhile in Istanbul, “The British founder of an organisation that trained the Syrian ‘White Helmets’ emergency response group has died in Istanbul,” Reuters reports. His name is James Le Mesurier, and he’s a former British army officer.

How he’s believed to have died (at this point): by having “fallen from the balcony of his home office.” He was found dead early this morning on the street near his home in central Istanbul’s Beyoglu district, Reuters reports. A bit more, here.

Happening Wednesday: President Trump meets Turkey’s Erdogan at the White House. One of the things the men are supposed to talk about is the Russian-made S-400 air defense system that Turkey purchased from Moscow, National security adviser Robert O’Brien told CBS News on Sunday.

Said O’Brien to “Face the Nation” (full transcript here): “Look, if- if Turkey doesn’t get rid of the S-400, I mean, there will likely be sanctions. The CAATSA sanctions will- will pass Congress with an overwhelming bipartisan majority and Turkey will feel the impact of those sanctions. We- we’ve made that very clear to President Erdoğan. There’s no place in NATO for the S-400. There’s no place in NATO for significant Russian military purchases. That’s a message that the president will deliver to him very clearly when he’s here in Washington.”

On Thursday: Trump meets with NATO Secretary General Jen Stoltenberg, who also has meetings scheduled with Secretary of State Mike Pompeo and U.S. lawmakers, RFE/RL reports in a preview.

How Best to Thank a Veteran? Avoid More Unjust Wars // Steven Katz: A 2017 poll found that about half of Americans would support launching an unprovoked war on a country that poses no near-term threat.

Betraying The Kurds Makes Things Harder for US Operators Everywhere // Jerry Meyerle, CNA: It will henceforth be much more difficult for U.S. combat forces and advisors to get help from local partners around the world.

The Cold War Ended 30 Years Ago. Why Are Things With Russia So Bad? // Tom Z. Collina, Ploughshares Fund: Critics said NATO expansion would start a new Cold War. They were right.

Russia Says It Used Autonomous Armed Strike Drones in a Wargame // Patrick Tucker: But some observers have questions about the claim.

At Long Last, the F-35 and F-22 Might Talk to Each Other // Patrick Tucker: And once service officials can digitally link two of the military’s stealthiest platforms, they’re going to try to link everything else.

The Mad Scramble for Syria // Kathy Gilsinan, The Atlantic: After weeks of chaos in the northeast, great powers redrew a small chunk of the map. And a bigger story is just beginning.

The U.S. military will keep about “500-ish… maybe 600” forces in Syria to fight ISIS and related activities, Joint Chiefs Chairman Gen. Mark Milley told ABC News’s “This Week” on Sunday. “There are still ISIS fighters in the region and unless pressure is maintained, unless attention is maintained on — on that group, then there’s a very real possibility that conditions could be set for a reemergence of ISIS,” Milley told Martha Raddatz. “So we’re committed to do that. The — the footprint will be small, but the objective will remain the same, the enduring defeat of ISIS.”
Not discussed: The oil security mission American National Guard soldiers have taken on over the past couple weeks.
Despite its 18-year duration, Milley also predicted the U.S. will remain in Afghanistan for a few more years still. Said Milley: “I think we have to go back to the original reason why we are in Afghanistan to begin with, which is 9/11. So, we went there to order to make sure that Afghanistan never again would be a haven, a safe haven for terrorists that would attack the United States. That mission is not yet complete. In order for that mission to be successful, the government of Afghanistan, the Afghan security forces, are going to have to be able to sustain their own internal security to prevent terrorists from using their territory to attack other countries, especially the United States. That effort is ongoing. It’s been ongoing for 18 consecutive years. I suspect it will be ongoing into the future for several more years.” Find the full transcript, here.

Bolivia’s president resigned after a general convinced him it was a pretty good idea after a highly suspect election, the Wall Street Journal reports. Bolivian President Evo Morales fled the capital of La Paz, plunging the country “a sudden era of political uncertainty,” AP writes. His departure ends “nearly 14 years in power and seemingly every person constitutionally in line for the job quit as well.”
Bigger picture, according to the Journal: “With Mr. Morales’s exit, the Latin American left has lost a visible steward for an anti-U.S. movement that had recently been buoyed by weeks of protests against Chile’s pro-globalization president, Sebastián Piñera.”
On the other hand, AP reports, “others — including Morales himself — saw it as a return to the bleak era of coups d’état overseen by Latin American militaries that long dominated the region.”
What now? “In Bolivian law, in the absence of the president and vice president, the head of the Senate would normally take over provisionally,” Reuters reports. “However, Senate President Adriana Salvatierra also stepped down on Sunday.”
Meantime, “Legislators are expected to meet on Monday to agree on an interim commission or legislator who would take temporary administrative control of Bolivia… It was not initially clear who would take the helm of the country pending a new election, though opposition senator Jeanine Añez said she was prepared to accept the responsibility.” A bit more here.
Russia’s reaction: What’s happening looks like a “staged coup d’etat“, Reuters reports separately from Moscow.

Russians are bringing Moscow’s foreign-policy package to Madagascar, the New York Times reports. And that means there are Russians offering “bribes, spreading disinformation and recruiting an apocalyptic cult leader.”

A guide to the first public impeachment hearings concerning the U.S. commander in chief, from AP: Those will take place Wednesday and Friday as “House committees are trying to determine whether President Donald Trump violated his oath of office by asking Ukraine to investigate political rival Joe Biden’s family and the 2016 U.S. presidential election all while the White House was withholding military aid to the East European ally that borders Russia.”
Trump-Ukraine timeline. What we know about what happened when, via AFP.
A who’s who of witnesses called by House investigators, compiled by Just Security’s Kate Brannen. So far, she notes, “Senior officials from the State Department, the Pentagon and the National Security Council have all given depositions, telling remarkably similar stories about how the Trump administration’s Ukraine policy shifted from what was best for the United States to what was best for Donald Trump and his bid for reelection.” Read, here.

And lastly this Veterans Day, some thoughts from a few troops who have fought in recent wars. In a short video by the Eurasia Group, five veterans make the case that it’s time to get U.S. forces out of Afghanistan. Danny Sjursen, a West Pointer and retired Army major, notes that a recent Pew survey found that more veterans (64%) than other Americans (62%) agreed that “the Afghanistan war was not worth fighting.”
And while you’re thanking those who served, Steven Katz — an Army vet who received the Bronze Star and Combat Action Badge for action in Iraq’s Anbar province — would like you to ponder this: “How Best to Thank a Veteran? Avoid More Unjust Wars.”
Your D Briefers offer our own gratitude and a salute to those who serve and have served. Enjoy the day. 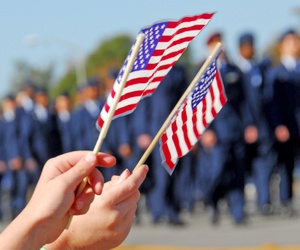 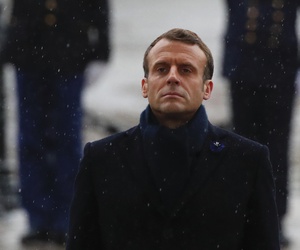 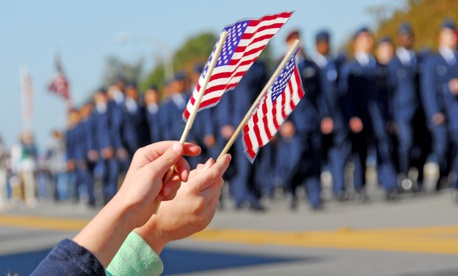 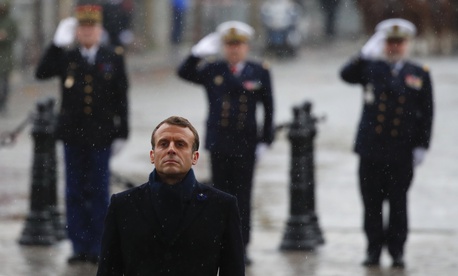