No Pentagon money for border wall, says a federal judge in Texas. That’s the word from U.S. District Judge David Briones, who “issued an injunction Tuesday blocking the federal government from using $3.6 billion previously earmarked for about 127 military construction projects to fund the wall,” the Wall Street Journal reports today. The only money that can be used is the $1.375 billion approved by Congress for the wall, Briones wrote.

Background: “In September, Secretary of Defense Mark Esper authorized the reprogramming of the military construction funds,” CBS News reports, “allowing that money to be used to build roughly 175 miles of border barriers. The move was expected to affect roughly 127 Pentagon projects.”

The lawsuit was filed by El Paso County and the Border Network for Human Rights, NPR reports. The county “argued that it would suffer reputational and economic harm from the border wall project because the president’s emergency declaration created the impression that the border city was dangerous.”

For the record, “The ruling doesn’t apply to the use of other funds for the wall,” CNN writes, including $2.5 billion in counter-drug funding as well as more money from Treasury Forfeiture Funds that have been set aside for wall construction.

Up next: The Justice Department will file an appeal, according to the Journal.

In case this sounds familiar, “a U.S. district judge last June blocked use of the drug interdiction funds for border wall construction” in California, NPR writes. “The U.S. Supreme Court, in a July order, said the Trump administration can proceed with construction while it appeals the case, which is now before the 9th Circuit.”

Reminder: The U.S. has about as many troops on the border as it has in Iraq. “The current tally is 6,500,” NBC reports, calling it “a number that will drop once a [future] troop transition is complete.” More here.

We Really Need to Fix the Federal Budget Process // Marcus Weisgerber: With the 2020 defense policy bill close to done, here are some ideas for next year.

‘Are You in This?’ // Kevin Baron: If so many Americans believe Russia is an ally, China is a good business partner, and terrorism isn’t worth fighting anymore, how can the United States be counted on for global security?

If Ukraine Is Impeachable, What’s Afghanistan? // Andrew J. Bacevich, The Atlantic: A misguided war that drags on inconclusively for more than 18 years is, I submit, a great crime.

The ‘Russia Hoax’ Is a Hoax // Adam Serwer, The Atlantic: A report by the FBI inspector general debunks the claims that the investigation into political interference by the Kremlin was a left-wing conspiracy to depose the president.

Everyone Knew We Were Losing in Afghanistan // David A. Graham, The Atlantic: And everyone in charge insisted we were winning.

Welcome to this Wednesday edition of The D Brief from Ben Watson. If you’re not already subscribed, you can do that here. On this day in 1941, Hitler declared war on the U.S.

The Taliban killed at least one person in a complex attack on Bagram Air Field, Reuters reports from Kabul. The injured include five servicemembers from the former Soviet republic of Georgia. Newsweek reports the attack began with a suicide bomb, “followed by several Taliban militants breaching the walls at the American base.”
AP reports the bomb hit “an under-construction medical facility” at Bagram, and “some U.S. service members were evaluated for minor injuries as a result of the initial attack.” Reuters reports “87 people were injured and one woman was killed” in the assault.
Question about the so-called “Afghanistan Papers” unearthed by the Washington Post’s Craig Whitlock: “Did we, the American people, really need an elaborate unearthing of thousands of previously classified documents to tell us that our efforts in Afghanistan aren’t going well?” That’s one question posed by Eliot Ackerman, who has served five tours of duty in Iraq and Afghanistan. Ackerman penned an op-ed for Time on Tuesday entitled, “All Americans Bear the Blame for the Failed Afghanistan War.”
In short, he argues “It is we, the American people, who appoint our representatives and fund our military with taxes, who are the ultimate masters of our societal successes and failures.” Worth the click, here.

Al-Shabaab fighters killed three civilians and two soldiers before they were shot dead by Somali security forces during a four-hour gun battle Tuesday night at the Syl hotel in the capital city of Mogadishu, Reuters reports.
Five militants were killed in the attack, in which security officers “initially mistook the gunmen for the police, until they began shooting and throwing grenades.”
ICYMI: The U.S. military has carried out at least 40 airstrikes in Somalia this year, (its second-busiest year to date) with the latest falling Monday in the south near Saakow, AFRICOM announced Tuesday. That strike is believed to have killed just one Shabaab fighter, and zero civilians.

AFRICOM wants a drone back that it says was shot down over Libya with a Russian weapon system, Stars and Stripes reported Tuesday. “We believe the LNA or Russians didn’t know it was a U.S. remotely piloted aircraft when they fired on it,” AFRICOM’s Gen. Stephen Townsend said in a statement. “But they certainly know who it belongs to now and they are refusing to return it. They say they don’t know where it is but I am not buying it.”
Said AFRICOM spokesman Col. Chris Karns: “The involvement of Russian private contractors or mercenaries is preventing peaceful resolution, prolonging conflict, and helping to fuel the civil war.” And on that note…

Turkey says it might send troops to Libya “to stop the Russian-backed forces now closing in on Tripoli,” the New York Times reported Tuesday. President Recep Tayyip Erdogan made the remarks twice in the past two days,
Why Turkey? “[B]ecause of its rivalry with the Emirati-Egyptian-Saudi bloc in a regional cold war, [Ankara] has become the only significant military backer of the Tripoli government,” the Times writes.
Why now? “Over the last three months, Russia has transformed Libya’s simmering civil conflict by deploying large numbers of fighters in what increasingly appears to be a determined push to help [Libyan militia leader Khalifa Hifter] capture the capital.” Hifter’s latest assault, “launched April 4, left his forces stalled for more than five months on the southern outskirts of the city.” But with Russian support, that assault has a new momentum. As a result, “Over the weekend, they captured most of the neighborhood of Salah el-Deen, one of their biggest gains in months.”
Worth noting: “Erdogan has more at stake, though, than stability in Libya,” the Times reports. And his remarks about intervening with troops in Libya “come just days after Ankara signed a deal with the Tripoli government that would give Turkey drilling, pipeline and other maritime rights over an expanded portion of the Mediterranean Sea between the countries. That set off outrage from Greece and Europe, but gave Turkey a new financial stake in the Tripoli government.” Read on, here.

Saudi military personnel in the United States have been barred from operational training in the wake of the Pensacola attack, Reuters reported Tuesday. That includes a rough total of 850 Saudis, including about 300 military pilots, who have been grounded or otherwise limited to classroom training. More, here.

North Korean hackers are renting tools from Eastern European cybercriminals, U.S.-based cybersecurity firm SentinelOne said in a report published today. At issue are tools from the cybercrime gang known as “TrickBot,” Reuters reports.
Bigger picture: This is yet another indication that “the lines between regular cybercrime and nation-state cyber-espionage operations are blurring,” writes ZDNet. “These gangs vary from ransomware operators to online spammers, fraudsters, and more. Renters can use the TrickBot trojan to install their own malware or one of the available TrickBot modules, depending on what operations they want to carry out on infected hosts.”
One of the tools used is called Anchor, and it’s “used in attacks targeted at large corporations, where the hackers need to remain undetected for weeks or months — while they steal data — and even long after the intrusion ended.” Read on, here.

In related cyberwarfare news, “Iran’s telecommunications minister announced on Wednesday that the country has defused a massive cyberattack on unspecified ‘electronic infrastructure’ but provided no specifics on the purported attack,” AP reports from Tehran.
“I cannot give details but yes,” he said, “we were targeted by a very organized and governmental cyber attack. We are looking into the attack’s different dimensions and will release a report on it. It was a massive attack.”

BTW: Former U.S. CT czar Richard Clarke has been working with the UAE to create “a cyber surveillance capability that would utilize top American intelligence contractors to help monitor threats against the tiny nation,” Reuters reported Tuesday in a large feature titled “Made in America.”
Why this matters: “The UAE unit expanded its hunt far beyond suspected extremists to include a Saudi women’s rights activist, diplomats at the United Nations and personnel at FIFA, the world soccer body. By 2012, the program would be known among its American operatives by a codename: Project Raven.” Dive into the #LongRead, here.

U.S. Army + rare earths for U.S. weapons. The U.S. military is about to begin its first “commercial-scale rare earths production since World War Two’s Manhattan Project,” Reuters reports today.
The gist: “The Army division overseeing munitions last month asked miners for proposals on the cost of a pilot plant to produce so-called heavy rare earths, a less-common type of the specialized minerals that are highly sought after for use in weaponry.”
Expected to sign up: At least three companies, including UCore, Texas Mineral Resources Corp, “and a joint venture between Lynas Corp (LYC.AX) and privately-held Blue Line Corp.”
In case you’re just tuning in, this is largely about China — and we produced a 10-minute podcast segment on related work being conducted at the University of Kentucky. (Find that here.) As Reuters explains, the U.S.-China rare earths tension “goes back to at least 2010, when China limited exports to Japan after a diplomatic dispute, sending prices for the niche metals spiking and fueling concerns across the U.S. military that China could do the same to the United States.”
FWIW: Industry executives told Reuters “A rare earth processing pilot plant could cost between $5 million and $20 million, depending on location, size and other factors, with a full-scale plant potentially costing more than $100 million to build.” Read on, here.

Finally today: Putting backdoors in encryption would hurt everyone, according to the former head of the NSA. Michael Hayden wrote Tuesday in Bloomberg about the Trump administration’s proposals (Politico) to require encryption schemes to have backdoors for U.S. law enforcement. Says Hayden: if U.S. authorities can get access to encrypted data, so will the Chinese and Russians.
This is “the most pivotal tech policy question of our time,” according to Thomas Rid of the Johns Hopkins University School of Advanced International Studies. Rid tweeted Friday “the future of end-to-end encryption is more important than the future of this administration, and [Tuesday’s U.S. Senate Judiciary Committee] hearings—yes, there’s a low but nonzero probability of meaningful legislation—are probably more significant than this entire impeachment procedure” happening elsewhere on Capitol Hill this December. 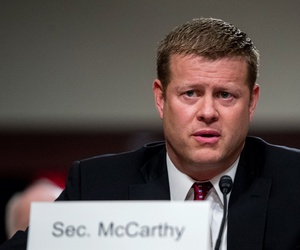 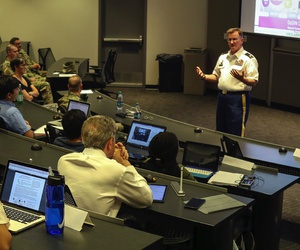 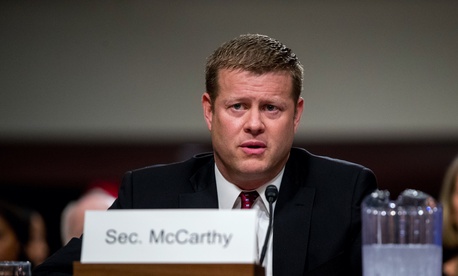 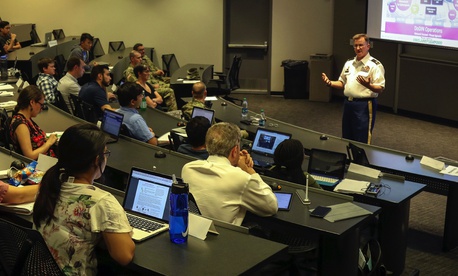