BTW: The phrase “White Nationalists” was cut from an NDAA measure for screen military enlistees, HuffPost reported Thursday. “The House language was specifically drafted to encourage screening for white nationalist beliefs in military enlistees. But after the Republican-controlled Senate passed its own version of the massive military spending bill and the two chambers’ bills were reconciled, the final NDAA instead requires the Department of Defense to study ways to screen military enlistees for ‘extremist and gang-related activity.’” More on that quiet change, here.

Just wrapped: SecDef Esper and Joint Chiefs Chairman Gen. Mark Milley spoke to the Pentagon press corps in the department’s traditional year-end briefing. Here’s what you need to know out of that, via Defense One’s Katie Bo Williams who was in the room this morning:

Chairman of the Joint Chiefs Mark Milley defended the 18-year war in Afghanistan, pushing back bluntly on the central conclusion of a recently-published official study into the war that showed officials presenting a much rosier assessment of the conflict than was evident on the ground — and insisting that the war has achieved its central objective to prevent another 9/11-style attack on the U.S. homeland.

Too many officials across too many agencies worked on Afghanistan, he argued, to suggest that there was any kind of deliberate lie to the American public about the state of the war. “I just don’t think you can get that level of coordination to do that kind of deception,” he said.

Milley also rejected comparisons of the study with the infamous Pentagon Papers that exposed officials’ mischaracterization of the war in Vietnam in the 1970s. The Pentagon Papers, said Milley, “were contemporary papers written in advance of decision-making.” The Afghanistan Papers, by contrast, “was an attempt by SIGAR to do post-facto interviews to determine lessons looking forward. I think they’re fundamentally different in both nature, scale and scope.”

Pressed on whether American lives had been given in vain, Milley — himself a veteran of the conflict — was unequivocal: “Absolutely not,” he said. “I couldn’t answer myself at 2 or 3 in the morning when my eyes pop open and I see the dead roll in front of my eyes.” In other words, he’s saying he couldn’t live with himself if he truly thought those lives were lost in vain.

Review the names of the deceased from the war in Afghanistan (more than 3,500 citizens and soldiers of the world, not counting Afghan lives lost) over at iCasualties.org, here.

Democratic Candidates Sound Off on China // Katie Bo Williams: Three of the seven candidates on stage for the primary debate argued the U.S. needs an international coalition to deal with Beijing.

Russia Plans to Cut Off Some Internet Access Next Week // Patrick Tucker: The Dec. 23 test aims to evaluate a system meant to control traffic, veil hackers, and quash dissent.

The Lessons of the Afghanistan Papers // Kevin Huggard and Tamara Cofman Wittes, The Atlantic: Americans need leaders who can tell them how and when they will decide to pull the plug.

Welcome to this Friday edition of The D Brief from Ben Watson, Katie Bo Williams and Bradley Peniston. If you’re not already subscribed, you can do that here. On this day in 1941, the P-40 pilots of the 1st American Volunteer Group — better known as the Chinese Air Force’s Flying Tigers — first saw combat when they intercepted Japanese 10 Kawasaki Ki-48 “Lily” bombers over Kunming, north of Laos and Vietnam in south-central China.

Boeing appears to have failed a key test mission for NASA’s plans to end American dependence on Russia for rides into space, CNBC reports.
The goal: Send the Starliner capsule on a crewless eight-day journey to dock with the International Space Station and then return, as AFP illustrates in a short video on Twitter, here.
What actually happened: “When the spacecraft separated from the launch vehicle, we did not get the insertion burn that we were hoping for,” NASA Administrator Jim Bridenstine said in opening remarks at an explanatory press conference this morning. As a result, the craft burned a lot more fuel than it should have and the Starliner is drifting along in the wrong orbit.
More technical explanation: The “Starliner had a Mission Elapsed Time (MET) anomaly causing the spacecraft to believe that it was in an orbital insertion burn, when it was not,” Bridenstine tweeted before the presser. Why the timer was “off” is still a mystery, NASA officials said in the morning presser.
What now? Assess the available data, and possibly “keep [Starliner] in orbit for at least half a day or so, until the orbital plane is in the right position for a landing at White Sands,” tweeted consultant Marco Langbroek. NASA officials in the morning presser put the White Sands return time at about 48 hours. The earliest landing at White Sands is projected to be around 7:30 a.m. local on Sunday. Read more from CNBC, here. Or watch the full morning press conference, here.

Senator asks GAO to investigate a Trump-favored company that was given a border wall contract. Sen. Jack Reed, D-Rhode Island, has asked the General Accountability Office to look into the $400 million contract awarded earlier this month to Fisher Sand & Gravel by the Army Corps of Engineers, which had earlier rejected two of the company’s prototype barriers as ineffective. NBC News, here.
ICYMI: The Pentagon IG opened its own investigation earlier this month.

The Justice Department thinks the founder of an academic archive website may be working for Russian intelligence, the Washington Post reported Thursday evening.
The person in question: “Alexandra Elbakyan​, a computer programmer born in Kazakhstan, is the creator of Sci-Hub, a website that provides free access to academic papers that are usually available only through expensive subscriptions.”
Even before the story broke, Elbakyan was reportedly known by supporters as a “Robin Hood of science.”
One reason why her activity seemed suspect: Elbakyan’s “critics say she has demonstrated significant hacking skills by collecting log-in credentials from journal subscribers, particularly at universities, and using them to pilfer vast amounts of academic literature.”

How might Democratic presidential candidates confront China? The topic came up in the Democratic debate Thursday night. Former VP Joe Biden called for the United States to send 60 percent of its naval assets to the Pacific region to ‘let the Chinese understand they are not going to go any further’ — a callback to the Obama administration’s ‘pivot’ to Asia,” as Defense One’s Katie Bo Williams reports. Entrepreneur Andrew Yang suggested building a U.S.-led coalition to set technology standards. Businessman Tom Steyer suggested working with Beijing to fight climate change. Read on, here.
China apparently blacked out the CNN feed for several minutes as the discussion turned to China’s human rights record and the mass detention of Muslim minorities in Xinjiang, CNN’s Will Ripley reported.

China’s second aircraft carrier is expected to operate alongside its first to block military aid to Taiwan if war erupts, the South China Morning Post reported Thursday. The Shandong, commissioned Tuesday, will join the Liaoning as a “dual-carrier battle group to cut off access to independence forces on the island.”
Another reason: “to stop US long-range bombers from taking off from a naval base in Guam,” the Beijing-based Naval and Merchant Ships monthly magazine reported Tuesday. “This would be to prevent American aircraft targeting the PLA’s landing transport formations and Chinese submarines,” it continued.
Tagging along with the two carriers will be “two Type 055 guided-missile destroyers, the region’s most advanced destroyer; four Type 054 frigates; six guided-missile frigates, as well as one supply ship and three Type 093B nuclear submarines,” according to the magazine. Get a little bit more on capabilities, here.

ICYMI: The U.S. Air Force ultimately plans to buy 10,000 Joint Air-to-Surface Standoff Missile-Extended Range missiles — a long-range conventional precision cruise missile made by Lockheed Martin, Hans Kristensen of the Federation of American Scientists tweeted Thursday after spotting the news in Air Force Magazine.
For the record, “Appropriators are giving the Air Force $483.4 million to buy JASSMs in 2020,” the magazine’s Rachel Cohen writes. And “The service asked for 430 units this fiscal year.” A bit more, here.

For the second time this year, a Chinese national has been arrested for intruding on President Donald Trump’s Mar-a-Lago property, CNN reported Thursday. “Lu Jing, 56, allegedly trespassed on the Palm Beach resort and was asked to leave by security” on Wednesday, according to police. She then “returned to Mar-a-Lago and began to take photos when Palm Beach Police Department responded and arrested her.” She was later found to have been in the U.S. on an expired visa, and “was also charged for resisting an officer without violence,” CNN writes.
Reminder: “Yujing Zhang, a 33-year-old businesswoman from Shanghai, was found guilty last month of unlawfully entering a restricted zone and making false statements to a federal officer” during an episode that played out this past March. Read on, here.
There’s also that report from this past weekend about the intrusion at a Norfolk, Va., military base when two Chinese diplomats and their wives ignored gate guards and drove onto the base for a mile before being stopped by firetrucks blocking the road. That, via the NYTs, here.

America’s biggest voting machine maker uses Chinese parts and has hidden ownership. Congress is asking questions about Omaha-based Election Systems & Software, a privately held company that has revenues of about $100 million a year but about which much remains unknown, NBC News reported Thursday.
Widely used: “Nearly half of all Americans who vote in the 2020 election will use one of its devices.”
ES&S is hardly the only voting-machine maker with obscure ownership: “The issue took on greater urgency after the FBI disclosed in July 2018 that a Russian oligarch had invested in a Maryland election services firm. Officials in Maryland and North Carolina have started questioning voting machine makers about potential foreign ownership.” Read on, here.

And finally this week: Canada’s Supreme Court said Thursday that the son of captured Russian spies is entitled to Canadian citizenship. This story, you may recall, helped inspire the FX program “The Americans,” the Washington Post reports.
Involved: Alexander Vavilov, age 25, “who grew up in Canada and the United States as Alexander Foley,” the Post writes. “Vavilov and his brother Timofey, 29, were born in Toronto to what appeared to be an ordinary Canadian family. But they lost their citizenship after their parents pleaded guilty in a 2010 FBI sweep of Russian spies working under deep cover in the United States. The brothers say they didn’t know their parents were working for the Russian Foreign Intelligence Service.” The intrigue deepens, here. 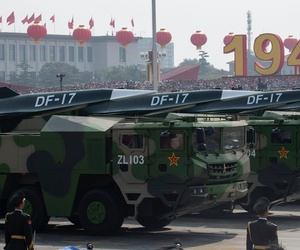 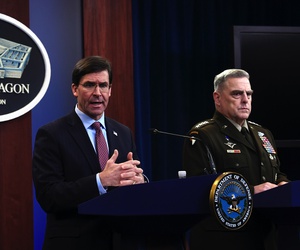 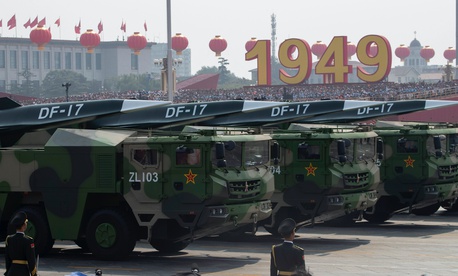 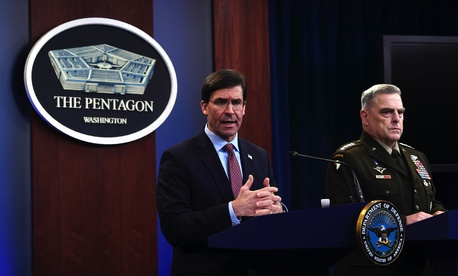