America’s new acting intelligence chief will now perform three jobs at once. On Wednesday evening President Trump tweeted that Richard Grenell, the U.S. ambassador to Germany and special envoy for Serbia and Kosovo, will also be the country’s new acting director of national intelligence. “Grenell, who has been the U.S. envoy to Berlin since May 2018, is known to be fiercely loyal to Trump, but critics have noted that he has no background in intelligence and no top-level management experience,” NPR reported after Trump’s tweet.

How The Atlantic described Grennell back in September: “To conservatives, Richard Grenell is the poster child of a Trumpian foreign policy. To critics, he is a shallow ideologue.” That, here.

Tweeted former FBI Agent Clint Watts: “Grennell as DNI can only be seen as a way for Trump to achieve confirmation bias for his conspiracies & block real analysis and true assessments of threats. Not a serious nominee. How much tax payer money will be used to run down nonsense?”

How we got here:

Nothing’s ‘Irreversible,’ But the Pentagon’s New Bureaucracies Aim to Come Close // Marcus Weisgerber: As budget hearing season gets underway, expect to hear a lot about “irreversible implementation” of changes toward great power competition.

Defense Policy Chief Ousted By White House // Katie Bo Williams: A Pentagon spokesman said he had “no information” that John Rood was fired for his role in Trump’s Ukraine scandal.

Trump Is Ill-Suited to Respond to the Coronavirus Outbreak // Peter Nicholas, The Atlantic: A crisis that is heading into its third month could draw out every personal and managerial failing that the president has shown to this point.

Welcome to this Thursday edition of The D Brief from Ben Watson with Bradley Peniston. If you’re not already subscribed, you can do that here. On this day in 1943, U.S. film studio executives agreed to allow the Office of War Information to censor movies.

The Taliban’s deputy leader has a message for America and the world, via the op-ed pages of the New York Times. To summarize, Sirajuddin Haqqani spends his first five or so paragraphs describing how his group feels like the victim in the 18-plus-year conflict before getting into the substance of his argument — of which he says “the kind of government we would have after the foreign troops withdraw… will depend on a consensus among Afghans.”
The kind of Afghanistan the Taliban wants is one “liberated from foreign domination and interference, [where] we together will find a way to build an Islamic system in which all Afghans have equal rights, where the rights of women that are granted by Islam — from the right to education to the right to work — are protected, and where merit is the basis for equal opportunity.”
And in a possible signal of the group’s resistance to residual Western counterterrorism forces remaining after conventional troops depart, Haqqani writes dismissively, “We are also aware of concerns about the potential of Afghanistan being used by disruptive groups to threaten regional and world security. But these concerns are inflated: Reports about foreign groups in Afghanistan are politically motivated exaggerations by the warmongering players on all sides of the war.”
And lucky for Washington, Haqqani writes (emphasis added), “After the United States withdraws its troops, it can play a constructive role in the postwar development and reconstruction of Afghanistan.”
So… now what? Careful stepping, he writes. Because “just as the United States does not trust us completely, we too are very far from fully trusting it. We are about to sign an agreement with the United States and we are fully committed to carrying out its every single provision, in letter and spirit. Achieving the potential of the agreement, ensuring its success and earning lasting peace will depend on an equally scrupulous observance by the United States of each of its commitments.” He doesn’t lay out what is included in that “agreement” the group is “about to sign,” but you can read the rest of his cautious but also slightly exultant message, here.

The U.S. and UK say Russia carried out “a widespread disruptive cyber attack against the country of Georgia” this past October. “The incident, which directly affected the Georgian population, disrupted operations of several thousand Georgian government and privately-run websites and interrupted the broadcast of at least two major television stations,” according to the State Department.
FWIW, the Brits say they’re more than 95% certain Russian were behind the attacks, and that “The UK will continue to expose those who conduct reckless cyber-attacks and work with our allies to counter the GRU’s menacing behaviour.” Here’s the U.S. State Department’s statement, attributed to Secretary Mike Pompeo. And here’s the UK’s Foreign Office with the British reax.
The Pentagon even chimed in this morning, with spox Lt. Col. Carla Gleason saying in a statement, “This attack is just one more example of how Russian malign behavior erodes transparency and predictability, undermines the rules-based international order, and violates the sovereignty of its neighbors. The U.S. Government position has been clear, we will defend our partners’ and allies’ core interests and hold the Russian Federation accountable for these destabilizing activities. We join the international community in urging Russia to cease this behavior in Georgia and elsewhere. We pledge our support to Georgia and its people and we will continue to help Georgia strengthen its security and resilience.”
Worth noting: Georgia will be a part of the upcoming Defender Europe exercise for the first time, Defense One‘s Patrick Tucker reminds us.

In NE Syria, the U.S. and Russia are battling over the roads. Or at least the U.S. seems to be trying to stay in convoy formation as the Russians seem to be trying to break into the formation inexplicably. Catch the footage, which made the rounds on social media Wednesday, here.

And in South Florida, “Federal prosecutors say a Russian government official recruited a Mexican citizen to photograph a U.S. government source’s vehicle,” the New York Times reported Wednesday.
How the accused was found: He “and his wife were about to board a plane to their native Mexico from Miami on Sunday when a customs official asked to inspect their phones. The official looked in a file of recently deleted images on [Hector Alejandro Cabrera Fuentes]’s wife’s phone and found a close-up photograph of a license plate. The plate belonged to the vehicle of a confidential U.S. government source who had been providing information about the Russian Intelligence Service.”
One sensitive datapoint that may have tipped off Russian intelligence: Fuentes was married to two women, and had families in two countries. “Russian customs officials had refused to let the wife and the two children depart after visiting the country,” the Times writes. Read on, here. Or at the Department of Justice, here.

Today in Coronavirus developments, China’s Communist Party leadership appears to be acknowledging unwelcome things could be on the horizon for the Chinese economy — specifically “agricultural, food, and labor-intensive industries” — should the crisis endure for what officials call a “relatively long time,” Reuters’ Gerry Doyle flagged this morning on Twitter.
By the numbers: Nearly 76,000 cases and more than 2,100 deaths, the vast majority in China, per Johns Hopkins’ dashboard. Meanwhile, nearly 17,000 infected people have recovered from the disease.

Mulvaney’s two cents on GOP’s fiscal hypocrisy and climate change. Acting White House chief of staff Mick Mulvaney made a few notable (if obvious) fiscal remarks during a speech at the Oxford Union on Wednesday night. Audio of the event was obtained by the Washington Post and reported shortly afterward.
“My party is very interested in deficits when there is a Democrat in the White House,” said Mulvaney, himself included. “The worst thing in the whole world is deficits when Barack Obama was the president. Then Donald Trump became president, and we’re a lot less interested.”
For the record: The calendar-2008 deficit of $459 billion soared past $1.4 trillion in calendar 2009 as the Obama administration and Congress spent to end the Great Recession. But it was back down to $585 billion in Obama’s last year in office. Under Trump, the deficit has grown from $666 billion to a projected $1.02 trillion this year. (Forbes)
What’s ahead: “Federal debt held by the public is projected to rise to $31.4 trillion at the end of 2030,” the Congressional Budget Office said in late January. “That amounts to 98 percent of GDP,” Politico reported at the time. What’s more, “Absent significant policy changes, debt held by the public could climb as high as 180 percent of GDP in 2050,” according to Politico. And that total, the CBO said, would be “well above the highest level ever recorded in the United States.”
By the way: The U.S. didn’t stick to defense budget caps for a single year of the [Budget Control Act of 2011],” Politico’s Connor O’Brien tweeted in early February during a budgetary analysis by the folks at the Center for Strategic and International Studies.
And on climate change and the GOP, Mulvaney told the audience this: “We take the position in my party that asking people to change their lifestyle dramatically, including by paying more taxes, is simply not something we are interested in doing.” Exactly why that is the case isn’t clear, according to Mulvaney. More from the Post, here.

If you need somewhere to be in D.C. today at 11:30 a.m. ET: Retired Rear Adm. Mark Buzby, the Department of Transportation’s Maritime Administrator, will talk about “national security and the role of U.S. commercial maritime industry” at the Center for Strategic and Budgetary Assessments in Washington. Details and address, here.

And finally today: Take a closer look at about 65 “Rockets of the World,” updated for 2020. It’s all in one poster you may want to fork over $40 via Etsy for it in the physical world — or you can behold it for free on the web, via Reddit, here. 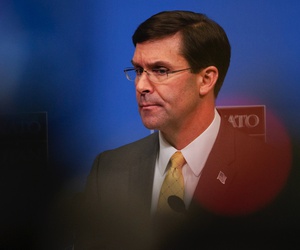 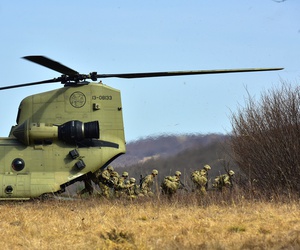 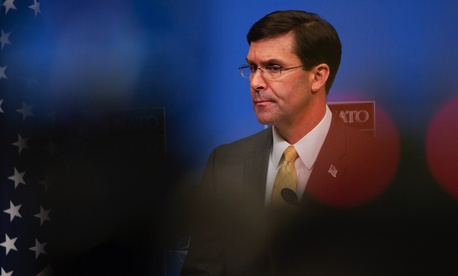 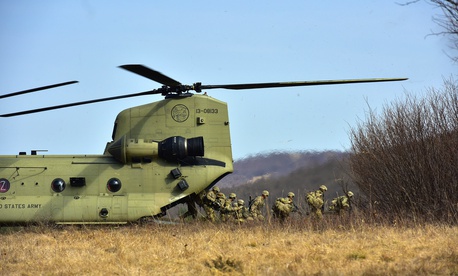