Pentagon outlines limits of military aid vs. coronavirus. The U.S. military is housing quarantined coronavirus patients at four locations and has offered to house them elsewhere as well. Army researchers and infectious disease specialists are busy in service labs looking for vaccines and medicines. And more than 1,600 National Guardsmen have been activated for various duties around the country, Pentagon officials said Monday.

Prominent Democrats have called for the military to get more involved, reports Defense One’s Katie Bo Williams. Sunday brought a New York Times op-ed by New York Governor Andrew Cuomo, who called for the Army Corps of Engineers “to retrofit and equip existing facilities — like military bases or college dormitories — to serve as temporary medical centers.” Hours later, 2020 hopeful Joe Biden said during Sunday’s presidential debate, “They have the ability to provide this surge that hospitals need. They have the capacity to build 500 hospital beds and tents that are completely safe and secure.”

But military medicine is focused on wounds, not infection. “We do have tent hospitals, deployable hospitals. The challenge is, they’re designed to take care of trauma patients and combat casualties,” U.S. Air Force Brig. Gen. Paul Friedrichs, the Joint Staff surgeon, told reporters at the Pentagon and on a conference call, “We don’t have any 500-bed hospitals designed for infectious disease outbreaks.”

The challenges of a country-wide epidemic. To be sure, the Reserves and National Guard have many medical professionals they could call up. But most of those doctors, nurses, and others are working at civilian hospitals and care facilities that are bracing for overload in coming weeks and months. Read more at Defense One, AP, or Politico.

Trump to states: you’re on your own for medical equipment. “Respirators, ventilators, all of the equipment—try getting it yourselves,” the president told the nation’s governors on a Monday conference call.

U.S. Navy’s first shipboard case: On Monday, after an infected sailor was discovered aboard the amphibious assault ship Boxer, “the warship’s leaders ordered dozens of senior enlisted sailors and officers into a cramped room on the ship to brief them on the crisis and proper social distancing, according to a sailor who attended the meeting,” ProPublica reported. “More than 80 Boxer sailors were reportedly called to the meeting, which shows how hard it may be for the Navy to limit coronavirus spread aboard its ships.”

Here’s a brief list of Chinese diplomats who are sharing a conspiracy theory on Twitter in what appears to be a coordinated campaign of disinformation — spreading a lie that the U.S. created the coronavirus in a military laboratory at Fort Detrick, Md.:

One takeaway from all the conspiracy sharing: It would sure seem that “more people inside the MFA [China’s Ministry of Foreign Affairs] are seeing this kind of stuff as a good career move,” tweeted Matt Schrader, China analyst at the U.S.-based think tank, Alliance for Securing Democracy.

Another POV: “Chinese party-state [is] taking a page out of Russia’s info ops playbook, using their Ambassadors’ @Twitter accounts for a coordinated disinfo operation,” tweeted Laura Rosenberger, who directs the Alliance for Securing Democracy. “The party-state is waging an info war using COVID-19, and using this moment to try new methods.”

The view from U.S. Strategic Command: The effects of COVID19 on the U.S. nuclear triad have been “very minimal,” STRATCOM’s Adm. Charles Richard told reporters in a phone call today. He also said STRATCOM is executing plans and strategies that have long been in place for pandemics.

As part of its core mission, Richard said, STRATCOM is constantly evaluating the nuclear attack capability of other countries like China, Russia, North Korea, and Iran. “To date, not seen anything beyond normal or day-to-day operations by anyone.” Read a bit more from Defense One’s Patrick Tucker, who was on the call, here.

New CEO Could Change the Way Lockheed Martin Does Business // Marcus Weisgerber: The selection of outsider James Taiclet hints at a new approach to its Pentagon work.

Federal Employees Worry Their Agencies Aren’t Keeping Them Safe from Coronavirus // Eric Katz, Government Executive: White House’s “maximum telework” edict isn’t helping those without computers, or the 85% of feds outside the DC area.

Dems Call for ‘War’ on Coronavirus, But Military Says Help is Limited  // Katie Bo Williams: Trump and New York Gov. Cuomo’s fight over the Army Corps of Engineers highlights divide over the virus and how government should respond.

Attacks on DOD Networks Soar as Telework Inflicts ‘Unprecedented’ Loads // Kevin Baron: As DOD scrambles to find equipment for those who can work from home, Pentagon leaders tell personnel: ‘No hand-shaking, no high-fives,” and clean your workstations.

Welcome to this Tuesday edition of The D Brief from Ben Watson and Bradley Peniston. If you’re not already subscribed, you can do that here. On this day in 1958, the U.S. launched the first-ever satellite with solar power, Vanguard 1. To this day, it remains the oldest manmade object still orbiting the Earth; and it will likely remain there for hundreds of years.

Someone just launched more rockets at another U.S. military base in Iraq, this time not Taji — but Besmaya, Iraqi officials announced today on Twitter. No one was injured in this most recent attack, which is the third in a week, AP reports from Baghdad. “A Spanish contingent of the coalition and NATO trainers are present at the Basmaya site. There was no immediate confirmation of the attack from the coalition and no militant group claimed responsibility for the assault.”
Recall that “The first attack prompted American airstrikes [on] Friday against what U.S. officials said were mainly weapons facilities belonging to Kataib Hezbollah, the Iran-backed militia group believed to be responsible,” AP writes. There’s been no known response to the second attack, from Saturday, which hit Camp Taji and wounded three coalition members and two Iraqi soldiers.

The man who lost the election in Afghanistan is still trying to run the country, the Wall Street Journal reports. Abdullah Abdullah, Afghanistan’s former chief executive officer — a position brokered to smooth over the last Afghan election — is still trying to defeat President Ashraf Ghani in, if nothing else, a battle of will.
Bigger, more immediate picture: “The showdown between Mr. Ghani and Mr. Abdullah is jeopardizing a fragile, two-week old Trump administration agreement with the Taliban to withdraw all American troops from Afghanistan by July 2021.”
A perhaps even bigger problem than that: The Abdullah standoff “shows that the [Afghan] constitution is failing at its most basic task: legitimating a head of state and commander in chief,” said former State Department advisor Barnett Rubin, who today works as associate director of New York University’s Center on International Cooperation.
So what the heck to do from here? No one seems to know, but you can read on behind the paywall, here.
BTW: Granted this claim comes from the Taliban, but the group’s spokesman alleges today on Twitter that Afghan security forces are defecting.

“Putin’s chef” Prigozhin escapes U.S. prosecution, for now. The Justice Department is dropping its prosecution of “two Russian shell companies accused of financing schemes to interfere in the 2016 election, saying that they were exploiting the case to gain access to delicate information that Russia could weaponize,” the New York Times reported Monday evening. “The companies, Concord Management and Concord Consulting, were charged in 2018 in an indictment secured by the special counsel, Robert S. Mueller III, along with 13 Russians and another company, the Internet Research Agency.” Yevgeniy Prigozhin is part owner of the Concord companies, a co-defendant in the case, and the companies’ founder.
One big concern: “a cache of documents that could potentially be shared with the defendants included details about the government’s sources and methods for investigation, among its most important secrets. Prosecutors feared Concord might publish them online.”
The case was set to go to trial on 6 April, but now won’t since that allegedly “promotes neither the interests of justice nor the nation’s security,” federal prosecutors wrote. More from the Washington Post, here.
Update: Concord today says it wants to sue the U.S. government for $50 billion “for unlawful prosecution and sanctions,” Reuters reports from Moscow.

Welcome to NATO, Macedonia. Spain just became the 29th and final member of NATO to ratify the inclusion of the Republic of North Macedonia, a Balkan country of just over 2 million people on just under 10,000 square miles. “Congratulations, North Macedonia!” Secretary General Jens Stoltenberg tweeted Tuesday.
That’s enough growth, Defense Priorities’ Dan DePetris argued last fall: The “benefits of NATO enlargement have not matched the advertising. The open-door policy, where any country in the North Atlantic can be invited to become a full member, has saddled NATO with a collection of states that are security consumers rather than true security providers.” Read that, here.

And finally today, there’s a new guy atop the U.S. security clearance agency. William “Bill” Lietzau was named the Director of the Defense Counterintelligence and Security Agency, aka DCSA, according to a Monday announcement from the Defense Department. “Lietzau currently serves as the director of DoD’s Personnel Vetting Transformation Office,” Federal News Network reported Monday. “He’ll replace Charlie Phalen, the longtime security executive who the Obama administration first tapped to the lead the Office of Personnel Management’s National Background Investigations Bureau back in 2016.”
DCSA is “responsible for background investigations for 95 percent of the federal government,” Air Force Magazine reported in its coverage of the Lietzau news. And for a bit more on the new guy, AFM writes that “Lietzau is an alumnus of the U.S. Naval Academy, Yale Law School, the U.S. Army’s Judge Advocate General School, and the National War College. His industry experience includes nearly five years with defense contractor PAE.” More from the Defense Department, here. 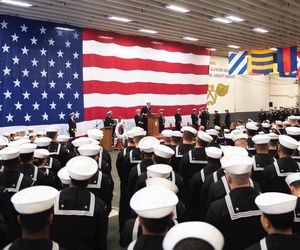 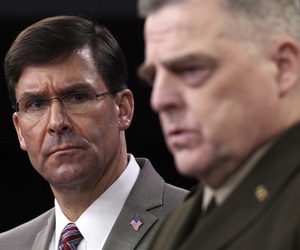 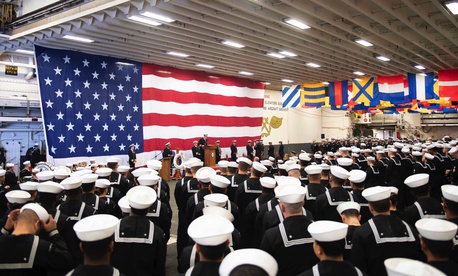 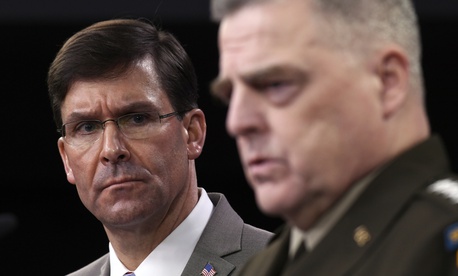