More than 1,000 sailors have moved off USS Theodore Roosevelt and into isolation on Guam, with some 2,700 more slated to move in coming days as accommodations can be found or created to house them, Acting Navy Secretary Thomas Modly said Wednesday. Defense One’s Bradley Peniston has the story.

90 sailors had tested positive for COVID-19 and 593 negative with several hundred tests still pending, Modly told reporters around 1:30 p.m. Washington time. About one-quarter of the crew had been tested at that point; none had yet required hospitalization.

About 1,000 sailors will remain aboard the Roosevelt to run its nuclear reactors, oversee its weapons, keep the ship running, and disinfect it while the rest of the crew maintains a 14-day isolation period. The ship will remain ready to deploy and fight if need be, Modly said.

“A communications breakdown” is how Modly and the chief of naval operations explained the March 30 letter from the ship’s commanding officer to his Navy superiors pleading for urgent help in finding accommodations for his sailors ashore. “The misunderstanding was the requirement to get off the ship faster,” Adm. Michael Gilday said at the press conference.

SecDef, now up to date: Modly said he had personally briefed Defense Secretary Mark Esper on the Roosevelt’s situation after Esper told CBS News on Tuesday — after the evacuation had begun — that an evacuation was not yet necessary. Read on, here.

The Pentagon is trying to get as many as 100,000 military-style body bags to FEMA for possible civilian use, Bloomberg’s Tony Capaccio reported Wednesday.

Trump spins SOUTHCOM plus-up as COVID-related. A long-planned addition of ships and forces for missions in and around Central and South America was described by President Trump as an urgent matter intended to stop the U.S. from “losing ground” to drug cartels during the pandemic.

Weeks in the making: “despite the seeming urgency of today’s announcement at the White House, Southcom’s Adm. Faller said in a hearing 3 weeks ago that this was already being planned,” Adam Isacson, of the human rights group Washington Office on Latin America, tweeted Wednesday. Faller “did not refer to COVID-19” when he brought it up in that March 11 hearing before the House Armed Services Committee.

It’s not too soon to think about how to re-open the country, five experts at the American Enterprise Institute think tank write in a new report. Cutting to the chase, we have four recommended phases:

A “government takeover” conspiracy theorist crashed a train near a U.S. military hospital ship. A 44-year-old man was charged Tuesday with intentionally derailing a train at California’s port of Los Angeles, near the hospital ship USNS Mercy, because he thought the ship was part of a government takeover, the LA Times and NBC News reported. He told authorities he thought his act would get media attention. It’s unclear whether he also knew it could lead to 20 years in prison.

In his own words: He repeated an apparent QAnon slogan to the California Highway Patrol officer who arrived on the scene, saying, “You only get this chance once. The whole world is watching…People don’t know what’s going on here. Now they will.” More here.

Also in California, the super-rich are buying up protective gear. “In the absence of an overall nationwide distribution plan, many smaller hospitals, nursing homes and physicians are being left behind, especially those who lack relationships with suppliers, ties to wealthy donors or the money to buy scarce equipment at a time when prices on the open market are skyrocketing,” the LA Times reported Wednesday.

The U.S.“purchased” that planeload of medical supplies from Russia, U.S. Secretary of State Mike Pompeo said Wednesday on Twitter. A State Department statement did not reveal the amounts purchased or their price.

Coming soon from China: One million masks aboard a plane owned by the NFL’s New England Patriots, the Wall Street Journal reports today.

By the way: China has under-reported total cases and deaths from the coronavirus, the U.S. intelligence community concluded in a classified report teased to Bloomberg on Wednesday.

Zooming out: “In an ideal world, American national and global leadership would provide a stark contrast to China at a time like this,” Greg Poling of the Center for Strategic and International Studies tweeted Wednesday, adding, “we no longer live in that world.”

America’s top military officer in South Korea doesn’t buy North Korea’s public insistence that it has no coronavirus cases. Gen. Robert Abrams told Voice of America and CNN in a joint interview today, “I can tell you that is an impossible claim based on all of the intel that we have seen… But I do know by their actions that for about 30 days in February, early March, that their military was locked down. And they took draconian measures at their border crossings and inside their formations to do exactly what everybody else is doing, which is stop the spread.”

And how does Abrams feel about those 4,000 South Korean workers furloughed because Washington and Seoul haven’t come to terms on how much the U.S. should receive for having its troops on the peninsula? “In the middle of this [pandemic], it’s really heartbreaking,” he said, adding, “Nobody envisioned this. Nobody wanted this. It’s personal. They’re not faceless people.” More from VOA’s William Gallo, sharing snippets on Twitter, here.

US Sailors Pour Off Aircraft Carrier and Into Coronavirus Isolation on Guam // Bradley Peniston: Navy leaders praise ship’s captain for urgent evacuation request; 3,700 will leave the ship within days.

We Must Continue Fighting Terrorism as Relentlessly as the Coronavirus // Christopher P. Costa: There’s no miracle drug for stopping terrorism. It is controllable, but never curable.

America Should Build an International Coalition Now // Brett McGurk: The United States has an urgent interest in filling the global leadership void during this stateless scourge.

The Coronavirus Teaches Us Not to Let Trump Press the Nuclear Button // Tom Z. Collina: Some of the president’s poor decisions on COVID-19, like proposing to reopen the nation by Easter, have been reversed. But a presidential decision to start nuclear war cannot be.

Welcome to this Thursday edition of The D Brief from Ben Watson and Bradley Peniston. Send us tips from your community right here. And if you’re not already subscribed to The D Brief, you can do that here. On this day in 1827, construction for the U. S. Navy’s first hospital began in Portsmouth, Va., and would take three years to complete. “Previously, the Navy had been ill-equipped to aid its wounded sailors,” the U.S. Naval Institute recalls, “especially in times of war, and the construction of a hospital dedicated solely to naval medicine at last paved the way to innovations that would prove invaluable, such as hospital boats.”

The U.S. military moved Patriot air defense systems into Iraq now that there have been multiple rocket attacks on various bases hosting American forces around Iraq. CENTCOM officially added those new air defense systems in Iraq, according to a statement released this morning.
Here’s President Trump’s tweet setting up the new developments on Wednesday at 1 p.m. ET: “Upon information and belief, Iran or its proxies are planning a sneak attack on U.S. troops and/or assets in Iraq. If this happens, Iran will pay a very heavy price, indeed!”
Locations: “One of the Patriot batteries was delivered to the Ain al-Asad in western Iraq last week and is now being assembled,” a U.S. defense official told Agence France-Presse. Recall that “Ain al-Asad was hit by a retaliatory Iranian missile strike in January after Washington killed Tehran’s foreign operations chief Major General Qasem Soleimani in a drone strike just outside Baghdad airport.”
And “A second battery was deployed to a base in Arbil, capital of Iraq’s autonomous Kurdish region,” while “Two more are still in Kuwait, where Washington has rear bases for its operations in Iraq.”
Iran’s foreign ministry calls the Patriot movements “warmongering during the coronavirus outbreak” that could lead to “instability and disaster,” AFP writes in some apparent face-saving from Tehran. More here.

Hackers allegedly linked to Iran have been targeting World Health Organization officials with phishing attempts, Reuters reports today. The latest wave of phishing attacks seem to have begun on March 2 and involved “malicious messages designed to mimic Google web services to their personal email accounts.”
Linked to Iran how? “Reuters found that the same malicious websites used in the WHO break-in attempts were deployed around the same time to target American academics with ties to Iran. The related activity - which saw the hackers impersonate a well-known researcher - parallels cases Reuters previously documented where alleged Iranian hackers masqueraded as media figures from organizations such as CNN or The New York Times to trick their targets.”
Iran’s reax: “These are all sheer lies to put more pressure on Iran,” said an IT ministry spokesman, who added, “Iran has been a victim of hacking.”
Recommendation: Maybe now is a good time to update/change your passwords.

SpaceX banned Zoom over privacy concerns this weekend, Reuters reported Wednesday — two days after the FBI warned of “VTC hijacking” via Zoom.
Zoom’s response: “we want to start by apologizing for the confusion we have caused by incorrectly suggesting that Zoom meetings were capable of using end-to-end encryption,” the company said in a statement Wednesday. “[W]e recognize that there is a discrepancy between the commonly accepted definition of end-to-end encryption and how we were using it,” and to learn more about how Zoom defines that discrepancy, read on here.
Did you know nearly one third of Zoom’s employees are in China? And its product development team? Also located in China.
Advice from Thomas Rid (who pinpointed the last two bits of trivia on Twitter this week) of the Johns Hopkins University School of Advanced International Studies: “[S]ome government departments and businesses should be significantly more cautious, and move sensitive comms over to WhatsApp or, better, Signal. That is if you don’t have another choice and *have to* use an openly available messaging platform from home.”

Even in these coronavirus times, China’s navy is bullying Indonesian fishermen away from their own food-rich territory in the South China Sea, the New York Times reported Tuesday from the Natuna Islands of Indonesia.
The latest situation, in short: “Backed by armed Chinese Coast Guard ships, Chinese fishing fleets have been raiding the rich waters of the South China Sea that are internationally recognized as exclusively Indonesia’s to fish… Wary of offending Indonesia’s largest trading partner, Indonesian officials have played down incursions by Chinese fishing boats, trying to avoid conflict with Beijing over China’s sprawling claims in these waters. But with the Chinese presence growing more aggressive, fishers in the Natunas are feeling vulnerable.”
And in case you missed it, “To counter China’s presence, Indonesia began building a military base in the Natunas four years ago. Today, the facility is moldering, empty of all but a few soldiers.”
So what now? “Jakarta’s latest tactic is to relocate hundreds of fishers from the populous Indonesian island of Java to the Natunas to act as maritime sentries. But fishers in the Natunas oppose the idea, since the Javanese are subsidized by the state and do the same destructive bottom trawling as the Chinese.” Read on, here.
FWIW: Here’s one POV on Chinese military initiative vs. the U.S., via the hawkish state-run Global Times. (h/t Isaac Stone Fish)

And finally today: We end with three mind-blowingly overcrowded PowerPoint slides about America’s ability to protect its citizens from nuclear war. They come to us from a 2015 presentation entitled “21st Century Air Force Nuclear Deterrence and Escalation,” which was flagged Tuesday on Twitter. 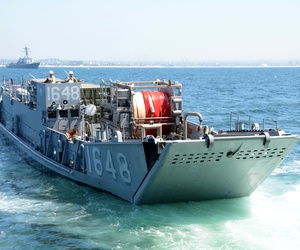 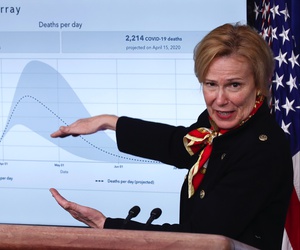 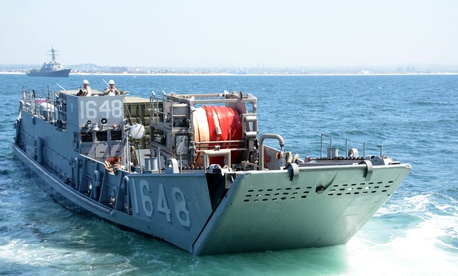 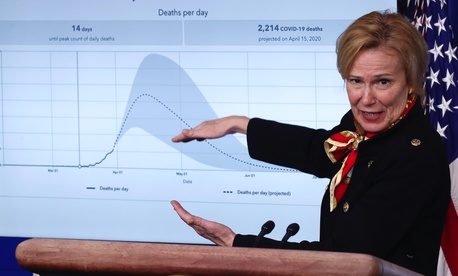