Soldiers assigned to the 101st Resolute Support Sustainment Brigade load onto a Chinook helicopter to head out and execute missions across Afghanistan, Jan. 15, 2019.

Some surprises, and unsurprising party lines, are revealed in the latest Chicago Council poll on American foreign policy opinions.

Measuring American public opinion on any issue comes with a big disclaimer. It assumes Americans actually have knowledge about that issue, that they understand what’s being asked, and that they are answering truthfully.

Some skepticism, then, attends the annual release of the Chicago Council’s survey of Americans’ foreign-policy beliefs. The council released its latest results on Monday, and there are some reassuring surprises. Under the catchy headline “Rejecting Retreat,” the council’s researchers say Americans are not following President Trump’s desires to withdraw from global engagement, multilateralism, and even military operations. But there’s always something deeper in between the lines in these polls.

When they asked Americans whether they support the U.S. taking “an active part in world affairs”, 69 percent said yes; 30 percent, no. Asked if they favor using U.S. troops to “fight violent Islamic extremism in Iraq and Syria,” 59 percent said yes. But when they asked if they supported maintaining troop levels in Afghanistan, support dropped to 41 percent — lower than for maintaining troops in Syria (43 percent), Germany (44 percent), or Japan (51 percent).

Of course, support for a given level of troops is not the best way to measure American support for overseas engagement — which as the council’s report notes, comes in many forms, including diplomacy and aid. But it shows something about how Americans really feel about “ending forever wars.”

An earlier 2019 Pew poll found that 59 percent of Americans said the war in Afghanistan was “not worth fighting.” That was long before this weekend’s surprise news that Trump had cancelled his hasty plan to host peace talks with Taliban negotiators at Camp David. On Monday, the Chicago Council poll revealed a similar sentiment: only 27 percent of Americans “say that military interventions in other countries [to solve conflicts] make the United States safer.” In fact, nearly half say they make the United States less safe. So, Americans must not like using U.S. troops to fight, right?

Not so fast. It’s true that most Americans are skeptical about intervening in certain types of foreign conflicts, but they are eager to use military force to defend direct threats to U.S. interests and allies, the survey finds. Most Americans want to maintain troop levels in South Korea, the Persian Gulf, and Japan. Most favor using U.S. troops if North Korea invaded South Korea, or if Russia invaded NATO allies in the east. And most Americans support using U.S. troops to “stop Iran from obtaining nuclear weapons,” fight ISIS (in Iraq and Syria), and as a peacekeeping force in Israel.

“Military intervention, in these polling numbers and in others, is distinctly unpopular,” said Richard Fontaine, president of the Center for a New American Security, at an event announcing the survey results at the Wilson Center in Washington, D.C. Other forms of foreign engagement poll high, like diplomacy and trade, but not for military interventions. That doesn’t mean Americans support the president on things like withdrawal from places like Afghanistan, he said.

“If you look at popular opinion traditionally, support or lack of support for a war has been related to: what are the costs, financially and in terms of casualties, and what is the perceived progress or lack thereof toward a particular objective that is stated?” he said. If a military operation is making progress at a relatively low cost, then “people may not actually like it but they would acquiesce to policymakers thinking it’s in the interest of the United States and continue doing it. It’s when they see high cost and no progress, that’s when a war becomes very unpopular, and that’s what we’ve had in these various wars over the years.”

So while U.S. engagement abroad as a policy generally remains highly popular, “military intervention is the one element of traditional American engagement that’s gone downhill in polls quickly.”

Ivo Daalder, president of the Chicago Council and former U.S. ambassador to NATO, said, “This goes to the heart of what we’re seeing here.” In national security circles, it’s often assumed that if you’re against the war in Afghanistan, you’re against all things military. “This poll says something completely different. It says that, in fact, the way you make America safe is the traditional way you make America safe, which is: U.S. military superiority, strong alliances, basing forces overseas, being willing to defend your allies when they are attacked. All of those, there is — 50, 60, 70, 80 percent of Americans support that.”

“What there’s no support for is military intervention to resolve conflicts,” Daalder said. “Yes, to defending allies. Yes, to being there. Yes, to being strong, believing in deterrence. But no to the kind of interventionism that we’ve had in the past, sort of, 25 years. That’s where the distinction lies.”

In one sense, the findings should alarm every leader from the Pentagon to Central Command, Congress, CIA, and every other national security agency. After nearly 20 years, half the country is against U.S. military intervention abroad. On the other hand, most of the country supports the basic traditional components of global security.

There were other notable findings in the survey. Partisan splits came where you would expect them, with Trump’s rhetoric and policy priorities making an impact.

China’s rise was considered a “critical threat” by 54 percent of Republicans, but only 36 percent of Democrats.

Notably, climate change as a threat is rising for Republicans and Democrats. It’s still hugely partisan, thought, with 78 of Democrats saying yes, and just 23 percent of Republicans agreeing. Democrats continue to favor “immediate action” remedies, while Republicans want more “gradual steps.” Fontaine said that there is a generational gap in those numbers, with millennial Republicans polling more likely to favor immediate solutions.

Trump entered office sharply critical of NATO as “obsolete” and pressed member states to increase their defense spending with undiplomatic rhetoric drawing international attention to the alliance. The result: American support for NATO has skyrocketed. The number of respondents calling NATO “still essential” jumped from 65 percent in 2016 to 73 percent. 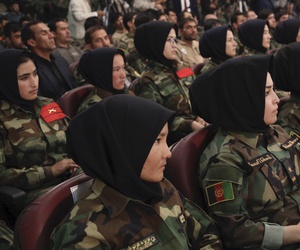 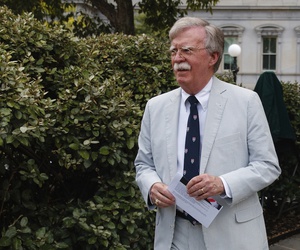 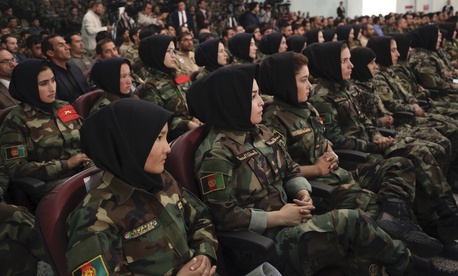 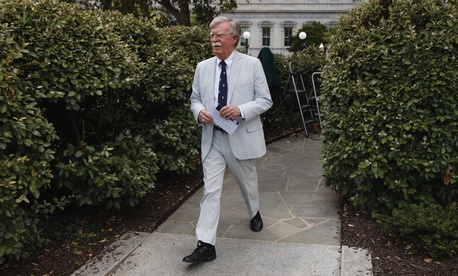