Shifting Left: How DevSecOps Strengthens Agency Security and Risk Management
Skip to Content
Get all our news and commentary in your inbox at 6 a.m. ET.
Science & Tech
How the Internet Could Have Predicted the Invasion of Ukraine

Software programs and publicly available satellite imagery can help you monitor the crisis in Ukraine like a government spy. By Patrick Tucker

In the buildup to the annexation of Crimea, Russian forces surprised many in Washington by maintaining strict radio silence. The United States was caught off guard in its inability to intercept Russian military communications, suggesting a failure of official intelligence, but also a new opportunity for public intelligence.

Using data, images and capabilities openly available on the Internet, the public could have stayed ahead of policymakers and better foreseen the current tensions before massive troop buildup on the Ukraine border.

STEP 1: Have a Machine Read a Lot of News

Getting news from the around the world is key to understanding the global security environment. Knowing this, Franklin Roosevelt in 1941 established an office called the Foreign Broadcast Information Service, or FBIS, to be run out of the CIA. The office’s mandate was simple: translate the news from around the world for U.S. policymakers.

Today, the idea of paying CIA employees to sit around and pore over publicly available foreign newspapers and radio broadcasts seems quaint in an age when millions of news and opinion feeds are constantly competing for attention in a 24-hour, global news cycle.

The challenge has evolved from finding and translating news data to figuring out which potential news sources might be useful for telegraphing the next steps in evolving geopolitical events like the Russian standoff with Ukraine.

Georgetown University data scientist Kalev Leetaru has developed a tool to do just that. The Global Database of Events, Language, and Tone, or GDELT, does to the entire Internet what the FBIS used to do for a small handful of foreign news sources.

GDELT is a free service that’s geared toward non-technical users. It crawls news reports from around the world and, through learning algorithms, analyzes the tone in those news items. “Today anyone can click a few buttons and get a map back of what's happening around the world, updated to the latest 24 hours,” Leetaru told Defense One.

Leetaru’s methodology has proven remarkably prescient. In 2011, he used a database of millions of publicly available records, robotically analyzed for tone along 1,500 dimensions, to accurately pinpoint the location of Osama bin Laden within a 200-kilometer radius of where bin Laden was eventually found in Pakistan. His work has proven most effective in predicting events of social or civil uprising such as the Arab Spring.

“In the case of the Russian invasion of Ukraine, GDELT showed deep unrest in Crimea even before President Yanukovych fled the country, illustrating that it was deeply enmeshed in the protests and unrest in Kiev and elsewhere,” Leetaru said. “Unknown armed men started showing up in Crimea around Feb. 28 ... By the 7th there were already rallies.” All of these events are documented in a handful of news articles that appeared at the time, available through the GDELT database, but the coverage received little attention outside the area.

Leetaru is careful to point out that newspaper data is not perfectly predictive. What it provides is “a good geographic overview of what's happening [to] demonstrate scope and breadth of the unrest.” Used in conjunction with other services, it can offer important clues to what may happen next. 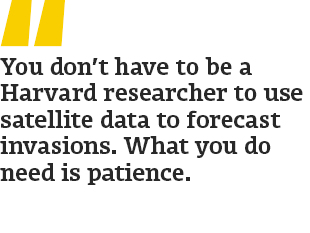 A company called Recorded Future offers a similar service. Founded in 2010 with money from Google, private venture capital firms and In-Q-Tel, the funding arm of the CIA, it’s a web intelligence platform that scans the Internet for articles about specific events and then robotically analyzes the articles on the basis of what they say about a given situation and the future.

They claim that they can provide analysis to forecast civil unrest on the city level with up to 85 percent accuracy one week out prior to events. At a lower level of certainly, they say can forecast future violence down to the city block. As more civil unrest occurs, the patterns around civil unrest become more obvious, Recorded Future founder Chris Ahlberg told Defense One. “Events that are repetitive in nature are easier to predict,” he said.

That means that as the situation in Ukraine carries on, propelled most recently by the takeover of government buildings by pro-Russian groups in the eastern towns of Sloviansk and Druzhkovka, and more people start creating more data around what they’re seeing through news articles and social media posts, clarity will improve.

Ahlberg believes that Moscow was doing its own predictive analysis years ago, analysis that helped shape the situation as it stands today. “Putin knew that Ukraine was getting unstable five years ago,” Ahlberg said. “He knew he couldn’t lose Crimea so he was gearing up his military.” Ahlberg is closely watching the situation playing out in the Moldovan region of Transnistria, an area that has received some significant media attention lately but that Recorded Future first began covering on March 19. “We were seeing separatist language coming out of Transnistria that was the same as what was coming out of Crimea,” he said.

Once you know the areas of interest, the next step is to get a visual understanding of facts on the ground.

NATO released several high-resolution photos last week claiming that the Ukrainian border is now hosting “35,000 to 40,000 [Russian] troops… equipped with infantry fighting vehicles, tanks, combat aircraft, logistics, and artillery.” The Russian government says the photos were taken during an August 2013 military exercise and insist they have no plans to invade Ukraine.

Visual signs of an impending action can show up long before soldiers start massing in formation. DigitalGlobe, the company that provided NATO with the satellite imagery from Ukraine, sells high-resolution satellite pictures directly to the public (though at a lower resolution than it sells to the U.S. government, because of currently existing law). That means that the average citizen can know almost as much about the facts on the ground as anyone in the government.

DigitalGlobe has five high-resolution earth monitoring satellites and will launch its sixth in August. The WorldView 3 can take photos of an area as small as 30 centimeters from 380 miles up as it moves around the globe from pole to pole at 7 miles per second.

“For the image analyst following events in Crimea, there are many things they would look for in the imagery beyond the massing of troops and equipment,” said Kurt Schwoppe of ESRI, a firm that provides geographic information services to the government and the private sector.

Schwoppe outlined several features, beyond troops and military equipment, that might indicate an invasion:

Public use of high-resolution satellite imagery to predict geopolitical events is not unprecedented. Between January and April of 2011, Harvard University’s Satellite Sentinel Project used publicly available satellite data to predict that the Sudanese Armed Forces (SAF) would be busting into the area of Abyei, located on the border of North and South Sudan, within the coming months.

The tip-off in that case wasn’t the movement of troops or tanks, but the construction of wide and less floodable roads to transport heavy oil extraction equipment. There was no oil near where the SAF was operating. “These roads indicated the intent to deploy armored units and other heavy vehicles south towards Abyei during the rainy season,” Satellite Sentinel Project researchers said in their report.

They conducted their analysis between January and April of 2011. The invasion took place on May 19.

You don’t have to be a Harvard researcher to use satellite data to forecast invasions. What you do need is patience.

“To be effective, you need a baseline for normal,” Schwoppe said. “Typically most imagery intel groups build up expertise, awareness of their areas of interest over time. Some guys work the same area for years. They actually build up ‘shoeboxes’ of images taken over many years that cover key sites. That way when a change occurs, it stands out like a sore thumb. Sometimes the changes are obvious, but often they must link the change to other sources. It becomes a game of connect the dots (or images) to really figure out what is going on.”

It’s an expensive game to play. DigitalGlobe has the largest archive of satellite imagery in the world, 4 .5 billion kilometers of the earth’s surface, which is 30 times the land mass of the earth. Archived imagery is important to establish a baseline, but newer images are key to understanding how a situation is developing -- and they’re pricey.

For instance, let’s say you wanted the most recent high-resolution satellite imagery for 400 kilometers around the areas of Kharkiv, Luhansk and Donetsk, places in Ukraine where pro-Russian groups recently seized government buildings. The price on average from DigitalGlobe for those areas would be $5,200 (and can be higher). The Satellite Imaging Corporation has a minimum order size of 100 square kilometers for a price of $4,000.  To get those numbers down, you need a better sense of where to look. That’s where services like the GDELT database and Recorded Future prove their value.

NEXT STORY: The Navy Just Turned Seawater Into Jet Fuel