Federal Agencies Tap Data Visualization to Track and Mitigate the Spread of COVID-19
Skip to Content
Get all our news and commentary in your inbox at 6 a.m. ET.
Science & Tech
The Military Now Has X-Ray Guns

Want a handheld blaster to look through walls? Enjoy. By Patrick Tucker

Superman had X-ray vision. Now, so does the United States military, in the form of an X-ray gun that can see through fabric, rubber and aluminum to find drugs, money, explosive liquids and even people. The recently released X-ray gun is the first device of its kind that a soldier or would-be superhero can hold in her hands. It’s about the size of a breadbox and works with the press of a button, allowing the user to actually see the outline of organic material buried behind cloth, leather or even aluminum by running the X-ray gun over the material and zapping it with low-level X-rays.

At a recent demonstration, the device could see through boxes, bags, car seats and airplane wings to reveal various organic compounds -- everything from bricks of simulated cocaine to paper, ammonia and other potentially explosive materials. Even a handful of grapes. (Defense One supplied some of the material to ensure the accuracy of the test.)

Representatives from American Science and Engineering, or AS&E would run the X-ray scanner, called the MINI Z, over the item and the image would show up on a Windows powered tablet PC. Organic compounds appeared bright white and distinct from the dark inorganic material.

The same company makes the large, toll-booth like backscatter X-rays scanners you walk through at airports – the ones that have given rise to recent controversy because of the embarrassing amount of detail they reveal about a person’s body. They work in almost the same as regular X-rays. When you go to a doctor’s office with a possible broken rib, the doctor will shoot a high-powered beam of photons through your body. The photons pass through the soft tissue to a film, which is then developed to reveal fractures, car keys, staples or other abnormalities. The photons get hung up on the parts of you that are more atomically dense, like bones or metallic objects.

Backscatter X-rays are less powerful and don’t actually penetrate deep into organic tissue. Instead, the photons of the beam hit the surface of organic material and scatter and ricochet, which is detected by a sensor. The MINI Z can shoot these rays continuously, as opposed to taking a single burst picture like a Polaroid One Shot.

“The ability to continually generate that X-ray beam is a big factor and a big change,” Joe Reiss, vice president at AS&E, told Defense One.

One of the advantages of a handheld X-ray gun is that it allows for quick, multiple scans from different angles. More pictures better reveal objects for what they are. For instance, during the demonstration, a mound of paper took several swipes with scanner to become clear on the image. 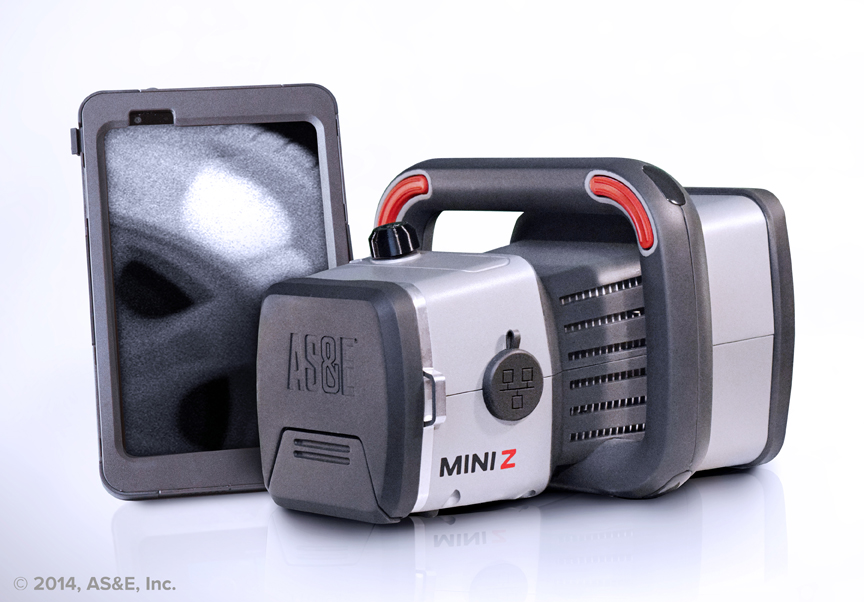 The X-ray gun represents a big innovation for shrinking the tubes that shoot the beams, battery and other elements of X-ray tech. It took AS&E and their suppliers seven years to reduce those form factors from truck-size, heat producing elements to something handheld.

“You have to be able to cool [the X-ray device],” says Reiss. “Our bigger systems have elaborate cooling mechanisms to do that but they’re much higher power.”

For instance, the MINI Z uses about ten watts of power. The company’s van-sized X-ray machine will use on the order of 3000 watts but can see deeper at further distances. “The basic imaging concepts are the same,” said Reiss. “The tradeoffs are different. How much power do you want? How big can it be? How much does it cost?”

For the military, cost and portability make the MINI Z an attractive new security capability for the Pentagon’s arsenal. The MINI Z comes in at $50,000, or half the cost of a typical airport backscatter X-ray. But the most important feature, from a national security perspective, is the simplicity of use. You turn it on, point, shoot and get an image. It requires almost no training to operate. That’s key because it’s not necessarily U.S. soldiers that will be using it (though AS&E does count the Defense Department as a customer) so much as the foreign soldiers under U.S. tutelage. Consider that in some countries the U.S. military is arming security forces made up of farmers and shepherds who speak no English but are trained to scan cars for opium, cash and explosives.

While an X-ray blaster is a useful gadget to have on the field, X-ray glasses would be far more so. Unfortunately, says Reiss, those will be a while in coming. “Practically speaking, X-ray imaging is fairly mature,“ he says, meaning, essentially, the low-hanging fruit in innovating the technology has already been picked. A sufficiently powerful x-ray beam needs tubes of a certain size and power. There is no Moore’s Law for shrinking X-ray tubes in the same way that you can make computers smaller, cheaper and more powerful by doubling the number of transistors you can squeeze onto an integrated circuit.  There is, however, still opportunity to improve the cost and the size of the unit beyond its current limitations. The MINI Z uses a lithium ion battery and as improvements are made in battery technology, devices like it should benefit.

In the meantime, the MINI Z could work with a virtual reality headset like, say, the Oculus Rift to provide a convincing X-ray glasses experience (if an Oculus Rift developer felt up to the task.)

“It’s one of the first things we thought of for this,” says Reiss. “There are a lot of complementary technologies.”

Photo of the MINI Z courtesy of AS&E

NEXT STORY: The Government Probably Has More Photos of You Than of ISIL's Leader