The outside of the National Geospatial Intelligence Agency, in Springfield, Virginia.

The head of National Geospatial Intelligence Agency doesn’t want to be a spy. By Patrick Tucker

To the average American, the term intelligence agency refers to a group of secret military types, locked in a windowless room in Virginia, furtively collecting data on bad guys, good guys, citizens, everybody. That data is delivered up the chain in manila envelops marked “Top Secret.” There’s still some truth to that stereotype (apparently, they get to have windows now) but Robert Cardillo, director of the National Geospatial Intelligence Agency, or NGA, is hoping to secure an unconventional legacy as a spy chief.

The agency receives around $5 billion annually, according to documents published by the Washington Post , and is primarily charged with collecting pictures from space. It’s a job that lends itself to parody. Think of Jon Voight’s character in Enemy of the State, who oversees an intelligence agency heavily reliant on satellite imagery to snoop on innocent people.

But that’s not the image Cardillo wants to project, either of NGA or of himself. “I would like to amaze people with how relevant and responsive [NGA] can be in the open….What I would like to surprise people about… is how NGA can come out and be more relevant with public diplomacy.” Cardillo, at an Intelligence and National Security Alliance dinner, laid out his plans for the future of satellite intelligence collection. It’s a future where enormous, expensive, military intelligence, surveillance and reconnaissance, ISR, satellites—still up there—play a more subordinate role to commercial image providers.

NGA is the biggest customer of high-resolution satellite imaging company DigitalGlobe, but they are hardly the company’s only client. DigitalGlobe has become more and more public facing in recent years. Want to see incredibly detailed (25 centimeter resolution) pictures of the Earth from space? Thanks to decision from the National Oceanic and Atmospheric Administration you’ll soon be able to buy those, though not cheaply.

In a conversation with reporters Cardillo said that scads of cheap satellites from nimble space start ups like Skybox, recently acquired by Google, Planet Labs , and BlackSky Global have “huge potential” to fill intelligence needs. A glimpse of the numbers reveals why; the market for satellite imagery, estimated at around $12 billion is twice NGA’s budget. That’s why the private players are leading the innovation.

Contrast Cardillo’s enthusiasm for open source satellite intelligence with the vision that under secretary of defense for intelligence Michael Vickers outlined during the Defense One Summit.

When asked about areas where he saw military intelligence technology moving forward, Cardillo said, “In the global coverage area, for the first time, we’re trying to create really persistent surveillance from space, rather than having episodic surveillance – actually be able to stare at areas for real long periods of time and improve the resiliency and the integration of our architecture.” Importantly, these would be different from geo-stationary orbiting satellites for communication, which have limited ISR capabilities. “Those will be really, really big things when they’re realized,” he added. “It will be a leap in overhead reconnaissance commensurate to anything we’ve done in the last 50 years or so, but they’ll take a decade-plus to realize.”

It’s a lofty goal, but in the meantime Cardillo is hopeful that smaller players will be providing not just more images to agencies but also delivering insight into what those images mean. “My sense in reading their business material is that they’re into delivering the analytics,” not just a picture. “I don’t see these companies selling pictures so much as analytics,” he said.

Satellite imagery and analysis used to be the exclusive domain of the United States and the Soviet Union. “The monopoly is over. It was secure. We had space and time and no competition at all,” notes Cardillo.

Consider the firm Orbital Insights, founded by former Googler James Crawford. The company earned attention from The Wall Street Journal when it began selling of images of more than 30 Chinese construction sites to hedge fund traders. As the Journal reports, the size of the shadows of buildings under construction can provide a more—shall we say—truthful indicator of economic conditions than can official numbers. That’s important for Wall Street types but also for national security watchers, since some scholars have pegged geopolitical insecurity in China to GDP falling beneath 6 percent per year. But Orbital Insights also provides pictures and analysis related to crops and farmland. Where Wall Street will want to know if they should short Columbia coffee futures, military decision makers could be looking for signs of an impending food shortage, which could have effects on stability on a global scale. For evidence of that just look at the way that high inflation in European Food Price Index telegraphed the Arab Spring. Satellite analysis of mall and discount store parking lots can predict a bad year for holiday sales or epidemic outbreaks  .

“It’s never about the image. It’s about the answer to the question around that image,” says Cardillo.

Nowhere is that truer than in those parts of the world where violence is increasing and human rights are under threat but where the media, largely, fears to tread. The democratization of satellite imagery promises to shine a bright light on such places. One of the earliest and most interesting examples of citizen crisis monitoring with open satellite imagery comes from Harvard’s Satellite Sentinel Project, or SSP. In 2011, SSP analysis of the disputed area of Abyei saw that Sudan was building large roads in areas where there was no economic reason for those roads to exist. “These roads indicated the intent to deploy armored units and other heavy vehicles south towards Abyei during the rainy season,” the group wrote in their report. By May of that year, the Sudanese Armed Forces had begun a formal invasion.

In his conversation with reporters, Cardillo highlighted the recent work of Human Rights Watch as an example of how open source satellite data, in the hands of nonprofits, can change the national discussion about a place, an event, or an ongoing situation.

The international nonprofit has been using satellite imagery to document militant group Boko Haram’s campaign of arson as on January 10 th , when the group observed “compelling evidence of widespread fire burn scars and building damages affecting approximately 57% of the town of Doro Gowan, Borno State. It is likely the majority of fire damages occurred during the evening of January 3, and morning of January 4, 2015 based on a review of active fire detection data from an environmental satellite.”

Amnesty International, too, has been using satellite images to showcase the worsening situation near eastern Nigeria, including this month’s massacre of an estimated 2,000 civilians. “These detailed images show devastation of catastrophic proportions in two towns, one of which was almost wiped off the map in the space of four days,” Daniel Eyre, Nigeria researcher for Amnesty International, told CNN.

“NGA did a classified assessment as well,” Cardillo says in response to the ongoing Boko Haram situation. “We have unique sources that we can use.” They also have a different client or consumer than does Amnesty International or Human Rights Watch. But Cardillo sees those audiences, as well as those capabilities, merging.  Cardillo is proud of the fact that more than 99 percent of the data NGA secured as part of a project to monitor Ebola spread in West Africa was unclassified. In addition, he said, “We are the first in the [intelligence] community to `crowd source’ applications development,” through the crowd code site  GitHub.

Classified satellite data just isn’t worth as much as it was when the object of our obsession was the Soviet Union, and that’s particularly true of our most recent conflicts. Cardillo addressed the difficulty of providing a window from space into the activities of the enemy du jour : the Islamic State (also known as ISIS or ISIL). “They don’t tend to wear uniforms…for the most part, ISIS is building on a frustration on Sunni natives. For us at a distance, to try and determine the ISIS level of control over that village? You’re into a difficult thing to assess. We try to document what we can, plotting the Iraqi positions…but we don’t try to oversell our intelligence. If you were to see our classified maps of Iraq, you would see a lot of grey…not black or white, but grey.”

He sees NGA “supporting [the State Department] more actively,” in the future and is most excited about “areas of the world where we can advance democratic causes.” Much of that advancement will be through the dispersal of images that everyone can access. That availability, in part, is what’s pushing NGA to be more open.

It may be an uphill fight, or at least an unusual path. Following his conversation with reporters, Cardillo addressed a room of industry representatives and intelligence professionals, people we used to call spies. When he told the crowd “With more transparency, NGA is uniquely positioned to play a leading role to advance public confidence in the Intelligence Community,” the room suddenly went quiet. 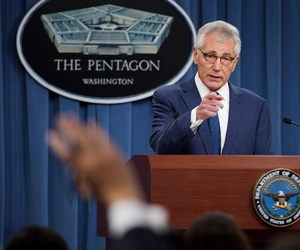 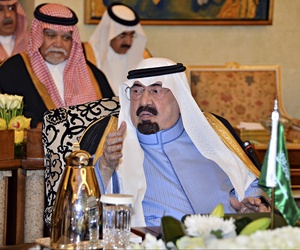 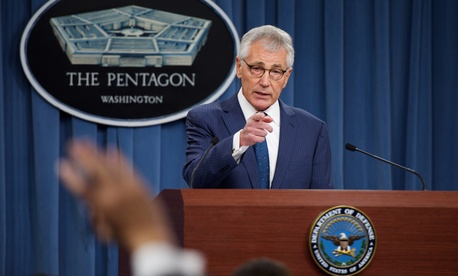 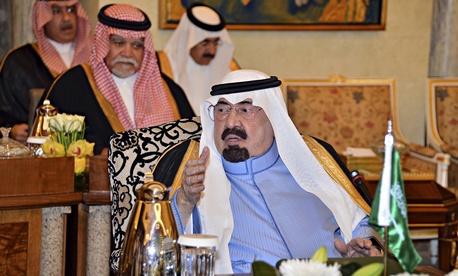