How to Overcome Challenges of Managing Hybrid, Multicloud Environments
Skip to Content
Get all our news and commentary in your inbox at 6 a.m. ET.
Science & Tech
The Drones of ISIS

Islamic State fighters are launching an ever-wider assortment of deadly drones, even as their UAV factories come under heavy attack.

“Over the last two months, coalition forces have observed about one adversary drone every day around Mosul,” a U.S. Central Command official told Defense One .

And they’re stepping up efforts to counter it: coalition aircraft have hit ISIS-made drones, launch sites, or production facilities in Iraq and Syria every day since Jan. 7, including four strikes west of Mosul on Jan. 10 alone, according to CENTCOM releases.

“The Coalition has struck a number of what we believed to be unmanned aerial vehicle facilities in Mosul,” the official said. “We spend considerable time researching and developing target lists to ensure maximum effects against” ISIS.

It’s not a new concern; in August 2015 , coalition forces hit an ISIS drone in Ramadi. But social-media posts and independent reporting from the Mosul war zone are helping to bring the wide variety of ISIS drones to light.

On Jan. 4, coalition forces hit a UAV factory — and Iraqi special forces found themselves shooting at grenade-launching and mortar-dropping drones in southeast Mosul, downing one that looks like soapbox-derby material.

Three days later, Kurdish Rudaw news captured footage (look around the 2:15 mark) of Iraqi troops fending off ISIS-made drone bombers in central Mosul, near the city’s fourth bridge over the Tigris River. The drones, possibly quadcopters, reportedly dropped at least 10 explosives during an hour of fighting. (For what it’s worth, ISIS isn’t the first to use this tactic in Syria; Hezbollah seized headlines with a similar strike on rebels near Aleppo last August.)

Here’s a pretty close look at one recently picked off by Iraqi special forces inside Mosul. It’s not too dissimilar from this Chinese-made DJI Phantom drone, dubbed “the Model T” of the civilian drone industry, the Wall Street Journal wrote in 2014.

Nice shot of the improvised release mechanism ISIL is using to drop grenades from commercial off the shelf UAVs https://t.co/Lj8Ltx0arQ pic.twitter.com/KCuzhUbndb

And here are three images CENTCOM shared with Defense One showing other quadcopter drones captured by Iraqi forces, date and location unknown: 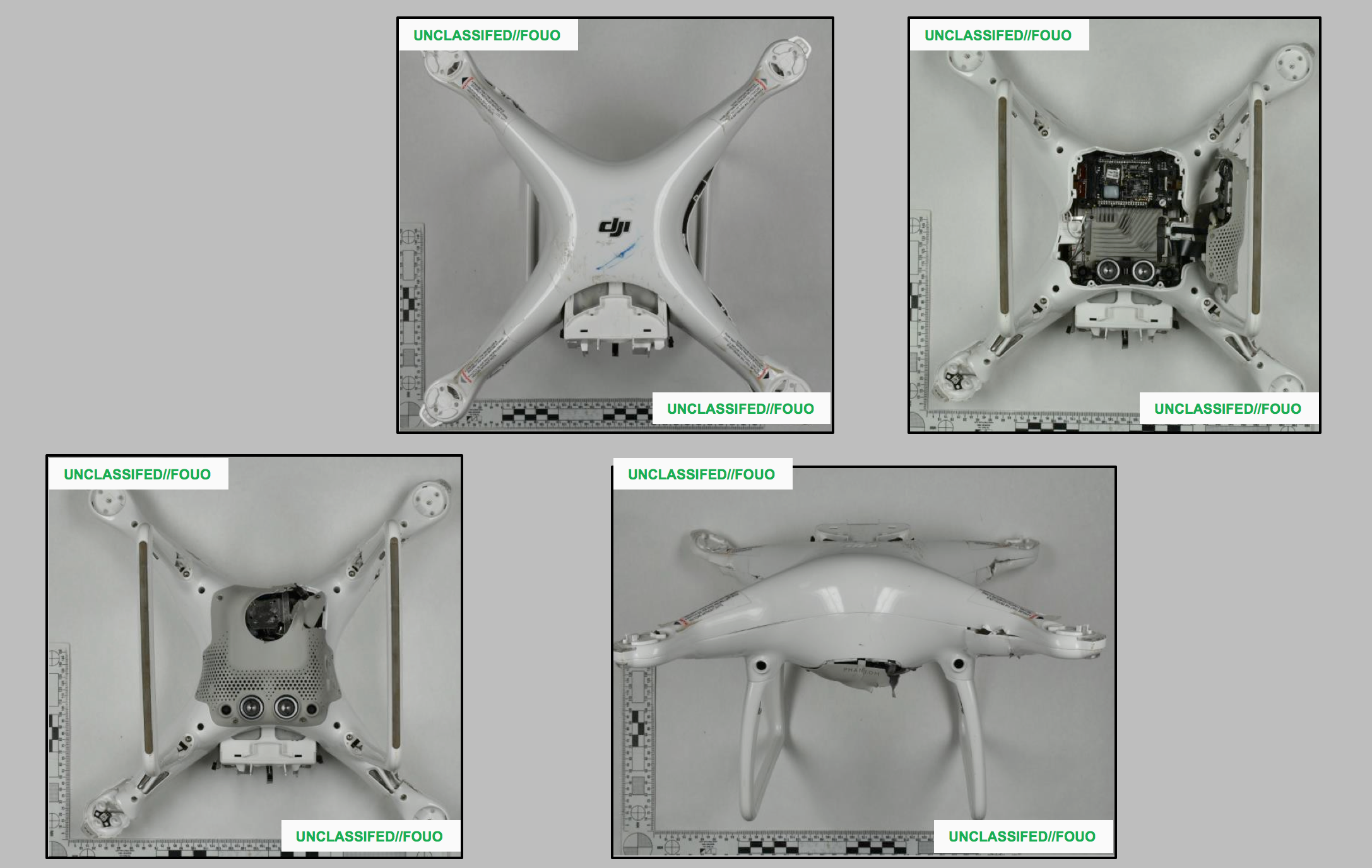 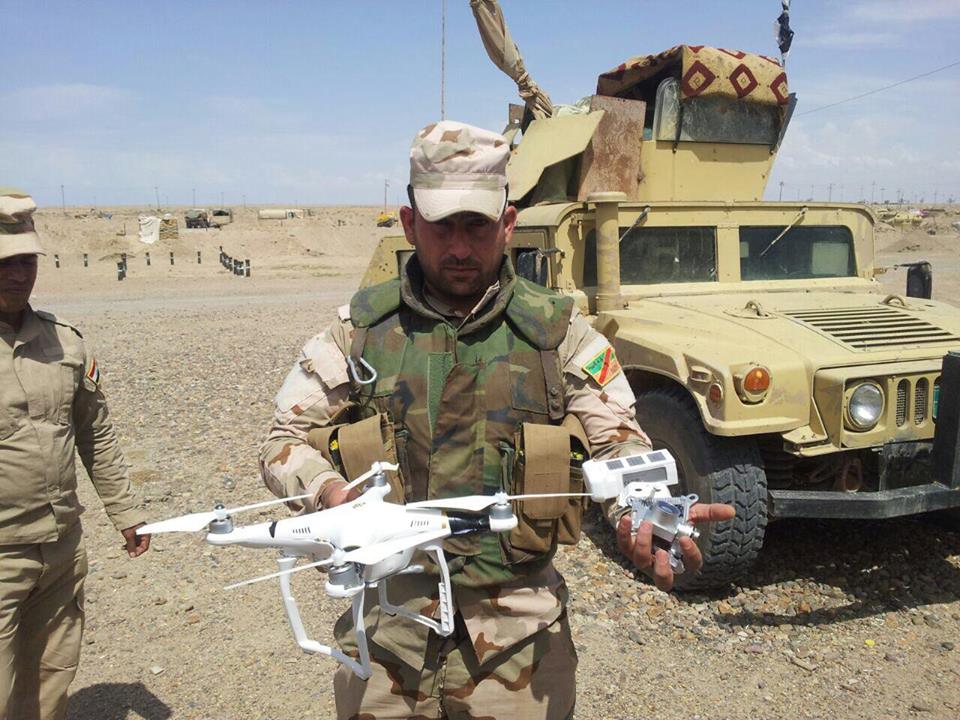 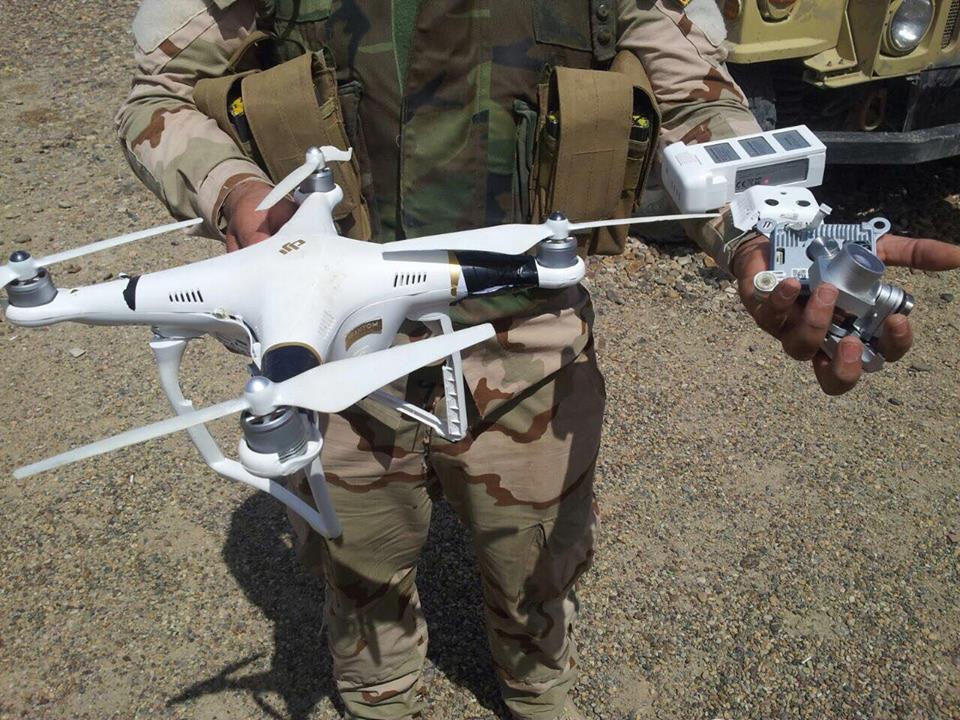 ISIS is using PG-7 HEAT warheads for its air VBIED, its kill area must be relatively small but it can destroy a tank from the top pic.twitter.com/7nyTpaq5vn

In early October, an ISIS drone appeared to have crash-landed near a Peshmerga position outside Mosul. But when the Pesh took it apart, the “battery pack” — an IED in disguise — suddenly detonated. Two Peshmerga troops died and two French special operators were injured in the attack, “believed to be one of the first times the Islamic State has successfully used a drone with explosives to kill troops on the battlefield,” the New York Times reported .

Here’s one of the group’s larger UAVs, reportedly shot down west of Mosul by Popular Mobilization Units in late November.

A similar drone recovered by the PMU near the airport in Tal Afar in mid-November.

Both resemble this surveillance aircraft the PMU also claimed to have shot down south of Mosul back in April.

It also resembles a UAV used by Kurdish Peshmerga troops on the first day of the Mosul offensive.

Kurdish Pêşmerga Forces prepare a UAV for use against ISIS terrorists today in the #Mosul offensive. pic.twitter.com/yP5Q3tH6QU

How to kill a drone

A U.S. military official who recently returned from Iraq offered a bit more detail on the ISIS drones.

“Most of what they have is very primitive, bought from hobby shops, modified,” this official said. “They’re also shot down quite a bit. The Peshmerga and [Iraqi security forces] love shooting at those things.”

Read more: Weapons of the Syrian War: An Animated Overview

“The regional joke is the Iraqi forces are defending themselves as if they’re at a wedding,” said Peter Singer, an analyst with the New America Foundation. (See, for example, the Rudaw clip .) “You see them blasting AK-47s into the air like they do at weddings. That’s not optimal.”

U.S. officials are pursuing a few options for defeating improvised, weaponized drones. Defense One ’s Patrick Tucker has reported on precision cameras, drones that detect drones , and “a directed-energy weapon that can disrupt a drone’s control link and GPS navigation at a distance of 400 meters.”

The U.S. military has also taken to flying EC-130H aircraft “jamming the radio signals used by insurgents to trigger bombs on the ground,” Vice News reported in November.

“The drone defender gun is not part of the regular kit,” he said. Soldiers are “going to face this potential threat across the world, in anything from battles to doing an embassy evacuation. And that’s not good. We should have seen this coming and developed a plan and equipment, not just for us, but for allied forces.”

Indeed, the problem of how to counter drones in the hands of extremists is at least two decades old. One wakeup call was “when the Japanese apocalyptic group Aum Shinrikyo considered using a drone to distribute sarin gas,” according to an October report from the Combating Terrorism Center at West Point:

The problem is unlikely to go away for many years to come, the authors write.

“Future off-the-shelf drones will be able to carry heavier payloads, fly and loiter longer, venture farther from their controller and be able to do so via more-secure communications links,” they warn.

Brace yourself; the skies are about to get crowded .