Shifting Left: How DevSecOps Strengthens Agency Security and Risk Management
Skip to Content
Get all our news and commentary in your inbox at 6 a.m. ET.
Science & Tech
Marines: 'The First One Through the Door Should Be a Lethal Robot'

The future of amphibious warfare looks like a constellation of bots large and small. The main challenge now is getting them to talk to each other.

OCEANSIDE, California — The beach assault began not with a bang but the whirring of drone propellers overhead, a grumble of gears, and the low sweep of the ocean. Frisbee-sized quadcopters raced ahead of enormous, self-driving amphibious assault vehicles. Satellites peered down as robotic submarines probed outward and up. With gigabytes of data flowing between these interconnected machines, it seemed — misleadingly — like a war that did not need humans at all.

From April 19 to 28, the United States Marine Corps put its ideas about the future of amphibious warfare to the test, along with a menagerie of drones and bots. During a ship-to-shore demonstration on Camp Pendleton’s Red Beach, an amphibious assault vehicle, or AAV, crawled out of the ocean like something from a 1950s Japanese monster movie and disgorged a MUTT robot tank armed with a .50-cal machine gun. Another MUTT, a product of an ongoing effort to create piggyback drone teams, launched a small quadcopter. Overhead buzzed the V-Bat, a drone that takes off like a helicopter but flies like a plane, while seagull-like Puma drones fed targeting information to explosives-laden, cannon-fired Switchblade UAVs. After several minutes, with the beach “conquered,” Marines marched in quietly from the north.

Marine Corps leaders have been seeking ways to make robots the first on the beach and first through the door on tomorrow’s battlefield, a multi-year effort. There have been more than a few false starts (remember Big Dog?), and Lt. Gen. Robert Walsh, head of the Marine Corps Combat Development Command, worries that the United States is falling behind peer adversaries like Russia and China.

“A lot of the high-end threats we see today, their governments are putting a lot of their own research and development money into these areas to perform differently on a modern battlefield...We see them moving in areas that we haven’t looked at since the Cold War," Walsh said.

Even non-state threats like ISIS are using drones in battle. 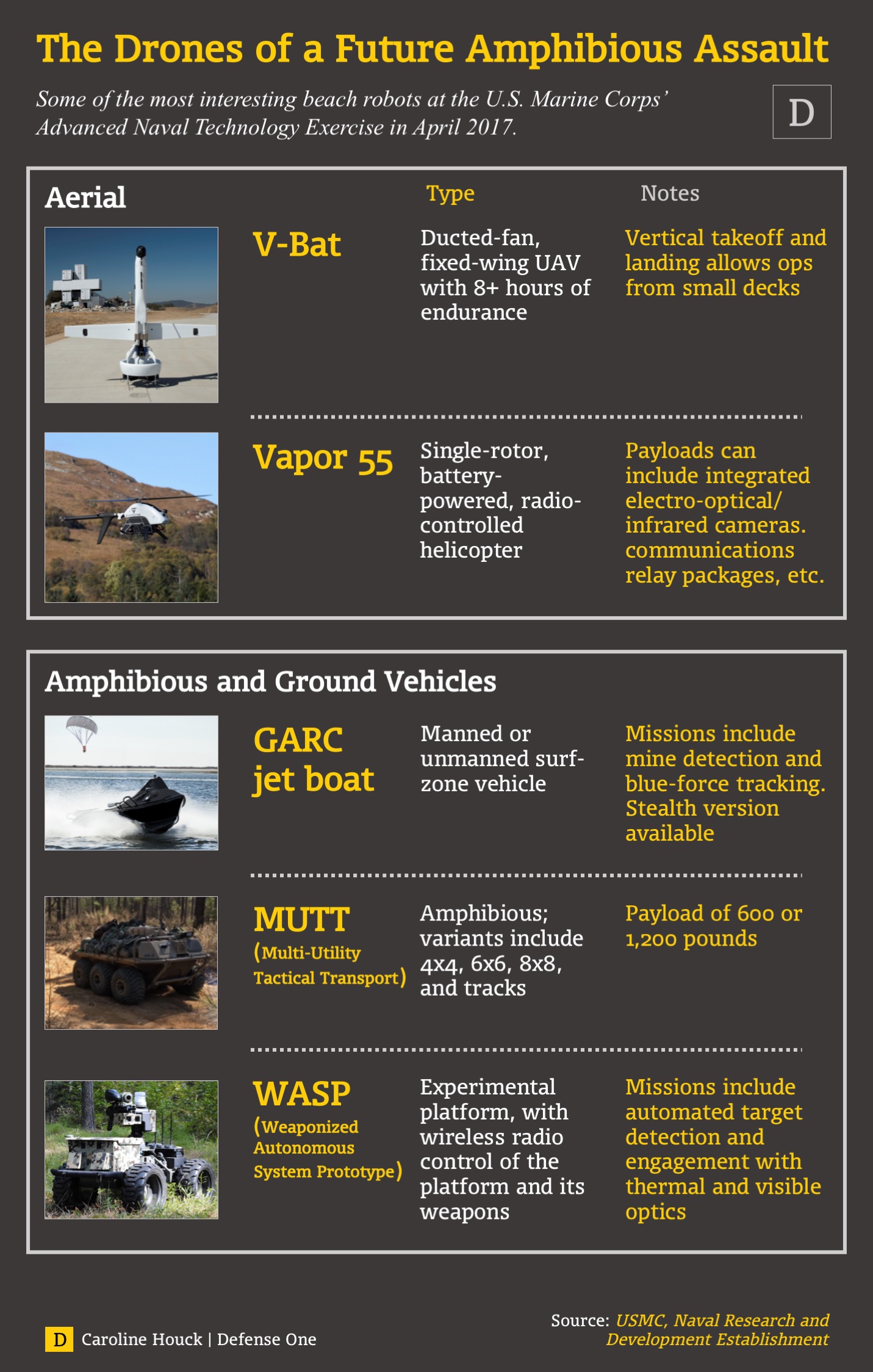 “I came into the Marine Corps in 1990, the year the Soviet Union fell…Guys my generation, our experience is we’re guaranteed maritime supremacy. We are guaranteed air supremacy…We’re the guys with cyber and EW. That’s no longer true,” observed Col. Daniel Sullivan, the deputy commander of the Marine Corps Warfighting Lab. “We aren’t used to being observed from the time we leave the wire [the safety of the base] to the time we return to the wire.”

How do you win the beach when everyone is preparing for the robotic battlefield? The difference between a robot assault that’s effective and one that’s more dangerous to allies than to adversaries depends on whether those gun-wielding robots, the Marines coming in behind them, and the commanders behind them are all speaking the same language, sharing the same picture, and doing so in way that can’t be intercepted or blocked by the enemy.

That challenge is a lot harder than slapping a 50.-cal gun on a self-driving beach bot, and it’s one the Pentagon is still struggling with. Some of the most important technologies that will guide robotic amphibious warfare are still waiting in the wings. On the sidelines of the mock assaults were researchers brought in by the Warfighting Lab to do preliminary tests on new concepts, or even just advertise their line of thinking.

One program is meant to slash the time needed to get satellite imagery analysis to warfighters on the beach. Today, it can take up to 24 hours to download a high-res satellite image to an earthbound station, process and analyze it, and send the resulting intelligence to operators on the battlefield. A Naval Research Lab program called Coalition Tactical Awareness and Response, or CTAR, hopes to shrink that lag to 30 minutes by creating a transportable analysis center that can pull the satellite data through a GATR antenna.

Others are trying to create common software interfaces for heterogeneous systems, sort of like the Windows operating system for sensor apps. In many areas, the Pentagon is closer to battlefield-usable artificial intelligence than it is getting sensors and software from different vendors to mesh securely and reliably. Among these efforts is the Tactical Situational Awareness System program from Space and Naval Warfare Systems Command.

SPAWAR is also working on drones that can follow orders given by voice. A longtime Pentagon ambition, this means creating circuits that can work out how to conduct complex operations from a relatively tiny amount of input. Animal brains can handle that sort of task because they can elaborate, improvise, make sense of their environment, and use intuition to fill in gaps in the data picture. That, in part, is why Stuart Rubin and Will Grefe of SPAWAR Systems Center Pacific  describe their work as “biologically inspired.” But recreating in electronics what nature took millions of years to evolve is not easy.

Also at Red Beach (but separate from the exercise itself) researchers from SPAWAR Systems Center Pacific tested new methods for millimeter-wave communications — a technology that will have implications far beyond the battlefield, or even the military itself.

SSC Pacific is testing Millimeter Wave Communications at #S2ME2. How will this technology benefit the Warfighter? pic.twitter.com/eS648gFUuJ

In many ways, the 30- to 300-gigahertz range is the largely unconquered frontier of the electromagnetic spectrum, one that has long been hard to exploit through conventional antennas. It’s very hard to generate, find, and process signals in this area because of hardware constraints, which are now falling away. It offers upload and downloads at 10 gigabytes a  second, faster than other wavelengths and helpful for more seamless transference of data. The pioneers in this field are a handful of high-frequency trading outfits that want high and uninterrupted bandwidth to execute massive trades in milliseconds. For a military force, millimeter-wave communications promise more reliable transfer of data, pictures, and collaboration between those machines storming the beach. It also means more waveforms possibilities for better software-defined network communications. That could give operators, and their machines, more room to establish new communication links and avoid jamming attempts and other electronic warfare tactics. Some analysts project that the millimeter wave, or ka-band, portions of the spectrum will account for 30 percent of military satellite communications by 2024. As those new antennas make their way into consumer devices, a lot more commercial data in the future could ride the ka-band, which could have big ramifications for the satellite industry.

But as technology advances, just like the real battle on the beach, the fight for that territory of electrons will also grow more intense.