Inside the Disaster Zone
Skip to Content
Get all our news and commentary in your inbox at 6 a.m. ET.
Threats
Number of Foreign Fighters in Syria Jumped from 800 to 8,000 in the Past Year

TAMPA, Fla. -- Last year, U.S. Army Chief of Staff Gen. Ray Odierno predicted that Syria’s rebels would soon be victorious over President Bashar al-Assad’s iron regime without the direct intervention of American troops. One year later, as Syria’s worsening civil war has morphed, so has the challenge of tracking from afar who’s who among a disparate network of fighting forces now numbering roughly 8,000 strong and growing, according to the top U.S. commander for the region.

President Barack Obama’s wait-and-see containment policy for the conflict has kept the war inside of Syria and American troops out. But the war has produced its own undesired consequences, including the influx of foreign fighters that U.S. defense and intelligence officials say has splintered the once formidable rebel alliance, given al-Assad’s forces time to regain key positions, and left thousands more civilians dead or displaced.

Critics have hammered Obama for not intervening militarily sooner, but the top U.S. general in charge of the region said on Wednesday that Syria is the most formidable problem he’s faced in nearly 40 years. In just the past year, the U.S. military no longer is tracking a two-sided war visible from space that fueled Odierno’s previous prediction. Now, commanders are deciphering a multi-fronted spider’s web of fighters more than battlefield maneuvers.

"We've gone from tracking large formations of opposing forces to networks of enemy, which is much more challenging, to almost individuals, which is enormously challenging for our intel community,” U.S. Central Command’s Gen. Lloyd Austin said during a keynote address to the intelligence satellite and mapping community at the United States Geospatial Intelligence Foundation’s GEOINT conference. And “unless you have done that” kind of detailed manhunt work, he said, “you don’t understand it.”

Austin, the final commander of the Iraq War, said the threat of foreign fighters and extremists is very real. 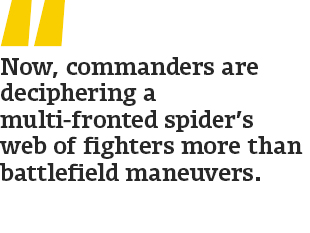 “It is a credible threat,” he said. “As I look at the Syria problem, I gotta tell you that this is the most complex problem I’ve seen in the short, almost 39 years that I’ve been doing this. If you kind of look at the elements of the problem, there’s chemical weapons involved, there’s significant proxy activity ongoing in that country, there’s sectarian issues, and, if you took one of those things on its own, it would make for a very complicated set of affairs, or issue. But if you combine all of that, then it makes it really, really tough. And you layer on top of that this issue of extremist activity that we’ve seen grow in that country -- it’s very concerning.”

“You know, when I took command about a year ago, we were talking about 800 to 1,000 foreign fighters being in that country,” he said. Now, the intelligence community says it’s 7,000 to 8,000, which means it’s grown by orders of magnitude within one year.”

If left ungoverned, they will “export mischief” to Western Europe and the United States, he said. “There’s a lot more to be done.”

“This, again, is a very troubling problem for us, one that we are going to work with our allies in the region to try to contain,” he said. “And so, we remain focused on it.”

NEXT STORY: Where Genocide Is Most Likely To Happen Next