In a Crisis and Beyond: Platforms Make Scalable Government Innovation, Modernization a Reality
Skip to Content
Get all our news and commentary in your inbox at 6 a.m. ET.
Threats
Hagel Says ‘Indispensable’ U.S. Still Not the World’s Police

President Obama says the U.S. is ‘indispensable’ to global security, but for Defense Secretary Chuck Hagel that doesn’t mean it’s the world’s police. By Kevin Baron

ABOARD A U.S. MILITARY AIRCRAFT – What’s the difference between being the world’s police and being the “indispensable” caretaker of global security?

Hours after President Barack Obama’s major global security speech at West Point outlining his vision for restrained but near constant worldwide United States military intervention in a “new world” of terrorism, Defense Secretary Chuck Hagel embarked on a 12-day tour where he will assure key Asian and European allies that the administration will sustain America’s “indispensable” role in protecting its interests and theirs.

The new security question that Obama and his senior military leaders are asking themselves is: When should the U.S. use military power? The president’s answer seems to be: It depends.

“I think, and I know the president believes this and said it, and anyone who’s been in this business understands – we are going to be living with terrorism for many years,” said Hagel, speaking to reporters hours after Obama’s speech on Wednesday. 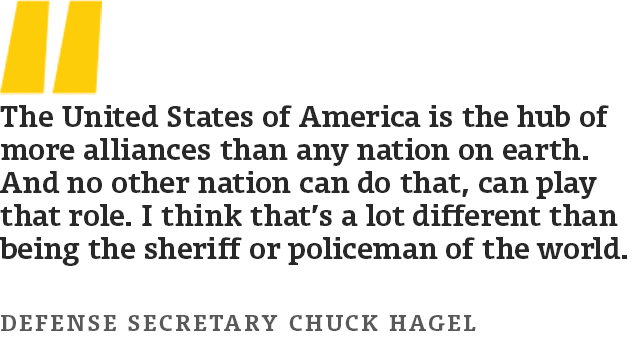 Defense One asked Hagel, who has advised Obama’s foreign policy thinking since the president was a junior senator a decade ago, if that indispensability -- backed by more special operations units being deployed than ever – is the same as being the world’s police?

“No, I don’t think it’s the same and let me explain why,” Hagel said on Thursday en route to Singapore for the Shangri-La Dialogue. “In the president’s reference to an indispensable nation, an indispensable nation means a world leader. It means a leader of alliances that bring people together for and with common interests that deal with common challenges. It means what we are continuing to do: capacity building with partners, using all our instruments of power with our partners, building alliances, strengthening alliances – no other nation in the world can do it or has done it.

“I think the president’s reference to the United States as the hub of global alliances like no nation ever in history is exactly the point. The United States of America is the hub of more alliances than any nation on earth. And no other nation can do that, can play that role. I think that’s a lot different than being the sheriff or policeman of the world.”

Leaving aside how one can focus on every corner of the world, Hagel’s trip exemplifies the enormity of what an administration accused of being gun-shy is promising: global vigilance, with a heavy dose of pragmatism. But pragmatism is a hard sell in Washington national security circles, where the deluge of post-West Point punditry has insisted this American president must show himself to be more hawk, less dove. It is an easy sell to many top brass who came up through Iraq, like Joint Chiefs Chairman Gen. Martin Dempsey, who as Obama’s senior military advisor has shown himself to be a military-as-last-resort general with no eagerness to charge a hill without damn good reason. And it’s long been a mantra of Hagel’s as he seeks military partners that can share the burdens of blood and budget from Australia to Afghanistan.

Hagel’s stops show the complexity of what U.S. military forces already do. In Alaska on Wednesday, while U.S. troops continue tracking stolen schoolchildren via drones in Nigeria, Hagel was briefed on Americans patrolling the northern skies with the F-22 Raptor, the world’s most advanced fighter, where Russian jets remain engaged in cat-and-mouse play over the Bering Strait. He visited troops that watch for Russian nuclear-tipped intercontinental ballistic missiles and are waiting for the day North Korea has them, too.

On Thursday, Hagel departed to Singapore to facilitate old continental alliances against Russia and foster new 21st Century multilateral ones facing China. There he will meet one of his Chinese counterparts in the People’s Liberation Army, six Asian defense ministers, and at least two prime ministers gathered for the Shangri-La Dialogue, a forum where Obama’s three previous defense secretaries have tried to coalesce Asian militaries into something resembling more of an Asian version of NATO and less of the 20th-century hub-and-spoke network of bilateral relationships that Washington manages.

Next week, Hagel will attend a NATO defense minister’s meeting in Brussels, hat in hand, hoping allies commit troops to Obama’s 2-year extension of the Afghanistan war as a limited counterterrorism fight, and re-evaluate NATO’s existence as a counterweight to Russia. Hagel later will make a deliberately calculated visit to a U.S. warship in a Romanian Black Sea port. Finally, he will play classic state-against-state geopolitics in Paris and join Obama and Russian President Vladimir Putin at Normandy for the 70th anniversary of D-Day, as France and the U.S. argue whether the best way to influence Putin is to keep him in isolation or bring him to breast.

Along the way, Hagel will stop in Afghanistan, which once commanded U.S. security attention but has long been in the rearview mirror for those looking ahead to the “new world” Obama described this week.

In American politics, it is a tired but effective campaign smear to pound a podium and say that the United States will not be the world’s global police. It’s an empty attack phrase that attempts to paint a political opponent – usually the incumbent leader of the free world – as being too distracted with overseas events and not attentive enough to problems in America.

As Obama said in his West Point speech, there is little threat of another nation directly attacking the U.S., but terrorism knows no borders, shows no retreat and is not going away. The U.S. could send troops wherever the commander-in-chief deems America and her security interests are threatened. For Obama, that does not include Syria, yet. It does include chasing al-Qaeda out of Afghanistan and into Africa, patrolling the skies with billion-dollar fighter jets, asking Japan and South Korea to hold hands for their own good, cajoling Europeans to pay up for their own defense, keeping the seas open from China to the Arctic Ocean, and sending elite American troops across oceans to search for kidnapped Nigerian schoolgirls. Indispensable, to the farthest corners of the earth.

NEXT STORY: Obama Wants a New $5 Billion Fund for the Global War on Terror