Next Generation Interceptor: The Nation’s Next First Line of Defense Against Ballistic Missile Threats
Skip to Content
Get all our news and commentary in your inbox at 6 a.m. ET.
Threats
A Short History of the Barbaric Terrorists of the Islamic State

How the Islamic State digressed from a Jordanian man's fantasy to an entire region's nightmare. By Bobby Ghosh

The Sunni militants who now threaten to take over Iraq seemed to spring from nowhere when they stormed Mosul in early June. But the group that recently renamed itself simply “the Islamic State” has existed under various names and in various shapes since the early 1990s. And its story is the story of how modern terrorism has evolved, from a political and religious ideal into a death-cult.

The group began over two decades ago as a fervid fantasy in the mind of a Jordanian named Abu Musab al-Zarqawi. A onetime street thug, he arrived in Afghanistan as a mujahideen wannabe in 1989, a year too late to fight the Soviet Union. He went back home to Jordan, and remained a fringe figure in the international violent “jihad” for much of the following decade. He returned to Afghanistan to set up a training camp for terrorists, and met Osama bin Laden in 1999, but chose not to join al-Qaeda.

The fall of the Taliban in 2001 forced Zarqawi to flee to Iraq. There his presence went largely unnoticed until the Bush administration used it as evidence that al-Qaeda was in cahoots with Saddam Hussein. In reality, though, Zarqawi was a free agent, looking to create his own terror organization. Shortly after the US-led invasion of Iraq in 2003, he set up the forerunner to today’s Islamic State: Jama’at al-Tawhid w’al-Jihad (the Party of Monotheism and Jihad), which was made up mostly of non-Iraqis.

Although Zarqawi’s rhetoric was similar to bin Laden’s, his targets were quite different. From the start, Zarqawi directed his malevolence at fellow Muslims, especially Iraq’s majority Shia population. Bin Laden and al-Qaeda regarded the Shia as heretics, but rarely targeted them for slaughter.

Zarqawi’s intentions were underlined with the bombing of the Imam Ali shrine in Najaf, the holiest place of Shia worship in Iraq. I was at the shrine when it happened, and remember many survivors asking, “Why us? Why, when there are so many Americans around, bomb us?”

One reason: sheer convenience. The Shia were easier targets because they didn’t yet have the ability to fight back. But there was also a political calculation. After Saddam was toppled, Shia politicians replaced the Sunnis who had long dominated power in Iraq. Zarqawi was counting on Sunni resentment against the Shia to build alliances and find safe haven for his group. It worked: Zarqawi sent dozens of suicide bombers to blow themselves up in mosques, schools, cafes and markets, usually in predominantly Shia neighborhoods or towns.

AQI: The rise and fall

By 2004, Zarqawi’s campaign of suicide bombings across Iraq had made him a superstar of the international “jihadi” movement, and won the endorsement of bin Laden himself. He now joined his group to bin Laden’s, rebranding it al-Qaeda in Iraq, or AQI. (It is also sometimes called al-Qaeda in Mesopotamia, but don’t confuse that with AQIM, which refers to the Algerian franchise, al-Qaeda in the Maghreb.)

By the spring of 2006, Zarqawi was beginning to see himself as something more than an “emir” or insurgent commander: He aspired to spiritual leadership (paywall) as well. (His successor as “emir,” Baghdadi, would make the same transformation, appointing himself “caliph” after taking Mosul.) No longer content merely with alliances, he began to insist that his Iraqi Sunni hosts submit to his harsh interpretation of sharia law—veils for women, beheadings for criminals, the whole nine yards.  Those who resisted, even prominent figures in the community, were executed. 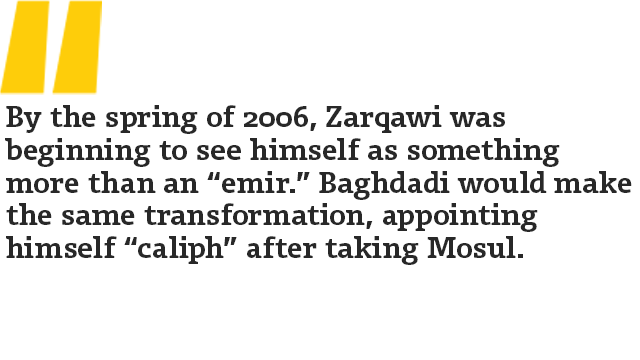 His death came just as the tide was turning against AQI. Many Sunni tribes, chafing at Zarqawi’s sharia rules, had begun to fight back. The US military, led by General David Petraeus, capitalized on this to finance and support an insurgency-within-an-insurgency, known as the “Awakening.” Tribesmen willing to fight AQI, even if they had previously fought the Americans, were designated “Sons of Iraq,” to underscore the fact that most of AQI’s commanders were foreigners, like Zarqawi himself. These Iraqi Sunnis believed that joining forces with the US would give them immunity from prosecution from previous crimes, lucrative government contracts to rebuild devastated Sunni areas, and a share of political power in Baghdad.

Petraeus’s “Awakening” campaign was accompanied by a surge of US troops, and it worked… up to a point. Demoralized by the loss of Zarqawi, AQI’s foreign cadres melted away. But Petraeus’s plan was designed mainly to reduce the violence and allow the US to leave Iraq, not to repair the Shia-Sunni rift that Zarqawi had opened up. American politicians and military commanders talked of creating a space for political dialog between the two groups, but the effort to enable that dialog was, at best, desultory. It was left to Iraq’s elected government, led by prime minister Nouri Al-Maliki, to make a lasting peace.

As the US discovered, Maliki and his Shia-led governing coalition were more interested in recrimination than reconciliation. The “Sons of Iraq” were denied salaries they had been promised. Tribal leaders never got those government contracts. In Baghdad, Sunni politicians were ignored, often humiliated, sometimes prosecuted. The most senior of them, vice-president Tariq al-Hashimi, fled the country after being charged with terrorism; he was eventually sentenced to death in absentia.

Meanwhile, Maliki filled the ranks of Iraqi police and military with Shia, some of them partisans from militias that had previously killed Sunnis. Sunni resentment now bubbled up again, setting the stage for AQI’s return.

By 2011, when the US troop withdrawal was complete, AQI was being run by Abu Bakr al-Baghdadi, and had morphed from a largely foreign to a largely Iraqi operation. Baghdadi himself, as his name suggests, is local. The absence of foreigners made it easier for the “Sons of Iraq” and their kin to ignore previous resentments against the group. There was also another rebranding: AQI was now better known as the Islamic State of Iraq, or ISI.

Baghdadi took Zarqawi’s tactics and supercharged them. The Shia were still his main targets, but now he sent suicide bombers to attack police and military offices, checkpoints, and recruiting stations. (Civilian targets remained fair game.) ISI’s ranks were swelled by former Sons of Iraq, many of whom had previously been commanders and soldiers in Saddam’s military. This gave Baghdadi’s fighters the air of an army, rather than a rag-tag militant host. 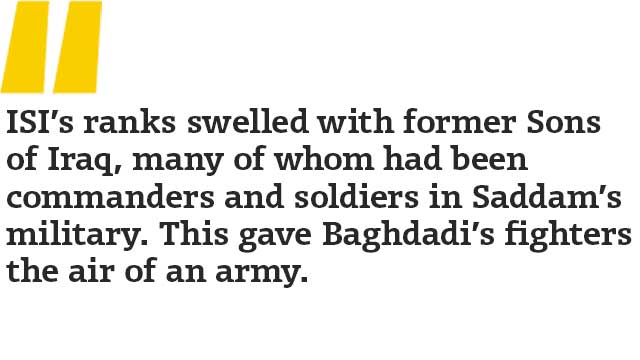 With thousands of armed men now at his disposal, Baghdadi opened a second front against the Shia—in Syria, where there was a largely secular uprising against president Bashar Assad. What mattered to Baghdadi and his propagandists was that Assad and many of his senior military commanders were Alawites, members of a Shia sub-sect. Battle-hardened from Iraq, ISI was a much more potent fighting force than most of the secular groups, and fought Assad’s forces to a standstill in many areas. Soon, Baghdadi renamed his group the Islamic State in Iraq and the Levant (ISIL), reflecting his greater ambitions. His black flags, emblazoned with the Arabic words for “There is no god but god” and the reproduction of what many believe to be the Prophet Mohammed’s seal, became ubiquitous.

IS: The final battle?

Just as Zarqawi had in Iraq, Baghdadi overplayed his hand in Syria. He began to impose harsh strictures on Syrian towns and villages under ISIL control, especially in the province of Raqqa. In early 2014, Assad’s forces had regrouped and begun to strike back; in May, they retook the city of Homs, which had been the symbolic heart of the uprising. It was a blow for the rebels.

But Baghdadi was planning a much bigger, bolder strike—in his home country. The taking of Mosul the following month marked a new phase in ISIL’s evolution: It was now able and willing to seize and control territory, not simply send suicide bombers to their death. Baghdadi used the occasion to promote himself to “caliph” and renamed the group “the Islamic State,” in a nod to its now even bigger ambition of ruling the entire region from the Mediterranean to the Gulf.

He also broadened his list of targets. Although ISIL had encountered minority religious and ethnic groups like Christians and Kurds in Syria, there seems to have been no central directive about what to do with them: Fighters were free to exercise their discretion. But in Mosul, the word came down from the “caliph”: Non-believers must either pay a special tax, leave, convert, or face death. The last two options were preferred. The city’s ancient Christian community was the first to be targeted, and thousands fled. Then, as the Islamic State widened its operations, smaller groups found themselves in the firing line.

By now, IS and Baghdadi were dominating headlines around the world in ways Abu Musab al-Zarqawi could hardly have imagined. And people everywhere were asking: Where did these hellhounds come from?

NEXT STORY: Snowden Says the NSA Shut Down Syria's Internet