Next Generation Interceptor: The Nation’s Next First Line of Defense Against Ballistic Missile Threats
Skip to Content
Get all our news and commentary in your inbox at 6 a.m. ET.
Threats
Defiant Chinese Admiral's Message: South China Sea 'Belongs to China'

There was just one thing on everyone's mind when Chinese, U.S., and Japanese admirals made a rare joint appearance at a London conference.

LONDON — In a rare appearance together, American and Chinese admirals sat alongside one another to present their views on maritime security in the Asia-Pacific region. The audience came to hear about one thing, the South China Sea, and China’s commander was clear: “It belongs to China.”

There was political theater and a few one-liners, as the panel remained cordial and the admirals were all smiles during handshakes before and after. But the tension was real and the messages direct.

“The South China Sea, as the name indicated, is a sea area. It belongs to China,” said Vice Adm. Yuan Yubai, who commands the North Sea Fleet for the People’s Liberation Army Navy.

Yuan said China is working with the U.S. military on a code of conduct for aircraft encounters, which he hoped would help avoid conflict among the five nations with claims in the South China Sea.

“I believe after this code of conduct is successfully passed, all the neighboring countries around this area will have good communication with each other whenever such unexpected encounters occur,” Yuan said.

Yuan spent most of his speech talking about the Maritime Silk Road, Chinese President Xi Jinping’s concept of creating ports along global trade routes. But the real point of interest was the South China Sea, where U.S. and Japan have protested China’s island-building. U.S. Adm. Harry Harris, Pacific Command commander, has said the islands are clearly intended for military use as forward operating bases. China has been rapidly building a giant airstrip Fiery Cross Reef. The U.S. Navy has released video of the islands by a P-8 spy plane. The Navy also released audio radio calls of the Chinese Navy telling the American plane to get lost.

Otsuka, in his remarks, shared the fable about a woman who tells her husband of 30 years she had a dream that she received a giant diamond ring for her birthday. She asks her husband what the dream means? So, for her birthday, he gave her a book about the meaning of dreams. 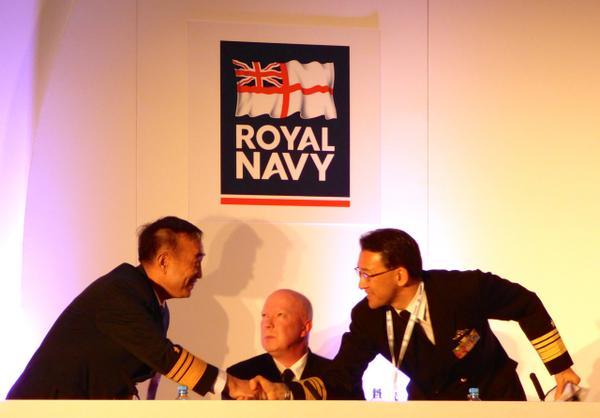 The Japanese admiral said, “As not a native English speaker, I hope you pick up what I truly mean from the context by reading between the lines.”

But the admiral’s accompanying PowerPoint slides were direct. Up popped a map of the South China Sea on two giant screens next to the stage. At the top, large text read “Reclamations in the South China Sea.” On the map, colored dots identifying islands China, Vietnam, Philippines, Taiwan and Malaysia all claim as their own.

Otsuka raised his concern that commercial fishing fleets were being used as maritime militia to defend reclaimed islands.

“This may provoke, sooner or later, a debate how the conflict between military and maritime militia, if any, should be handled,” he said.

It was a brief exchange that showed that there is much more to be said. About 20 minutes into his speech, the think tank moderator informed Yuan he had reached his allotted speaking time limit. The admiral paused as his translator nervously relayed the message. Yuan continued and a concerned look appeared on the translator’s face.

“If all these [people] can hear and understand Chinese,” he said, “I would [have been] shorter.”

NEXT STORY: How To Keep Hackers from Causing Chaos at the Gas Pumps—and 9 Other FBI Warnings