Building Stronger Public Health through the Pandemic and Beyond
Skip to Content
Get all our news and commentary in your inbox at 6 a.m. ET.
Threats
How to Tell The Difference Between a Nuclear Bomb Test and an Earthquake

The preliminary data suggests that the event in North Korea was not, in fact, the end of the world.

Shortly after North Korea claimed it had tested a hydrogen bomb — a weapon potentially hundreds of times more powerful than the fission bombs the country had already set off — seismologists at the United States Geological Survey, or USGS, went to work trying to understand the event. Their early findings suggest that a nuclear bomb test did occur but that it wasn’t a hydrogen bomb. So how do you tell the difference?

First, you try to rule out the possibility that North Korea was just trying to claim credit for an earthquake. Geologists and seismologists look at several factors to determine whether a seismic event is natural or manmade. One is the location: is it on a known fault line, a place where there’s a lot of mining activity, etc.? Another factor is the seismological waveform itself, the waving lines that appear on the seismograph. An explosion forms wiggles that are different from the ones generated by an earthquake, according to USGS seismologist Paul Earle.

Lay a Slinky on the floor, grab one end, and move it back and forth to create a wave that propagates down its length. This is called shear wave propagation, the kind created by tectonic plates slipping beneath the surface of the earth. “That side-to-side motion, you’ll get less of it in an explosion,” said Earle. 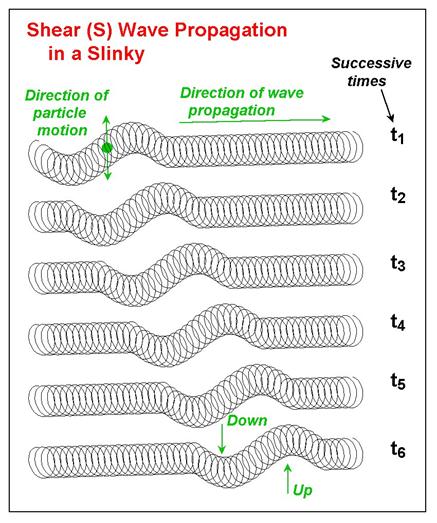 An underground explosion, by contrast, sends out compressional energy. The coils of the Slinky extend but don’t move out. “It will usually be sharper” and less protracted, he said. 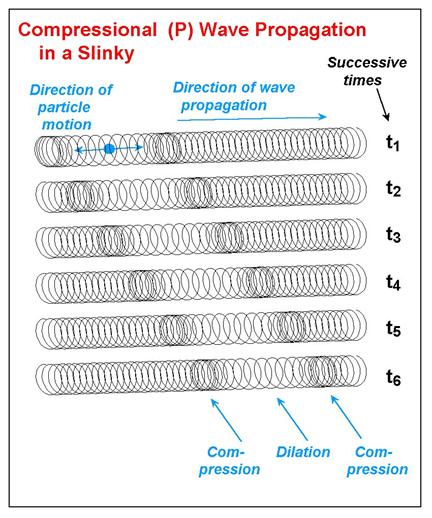 So what happened in North Korea?

The data from hundreds of seismological instruments suggests that the event occurred very geographically close to Punggye-ri, where North Korea tested a non-hydrogen nuclear device of about 10 kilotons’ yield back in 2013. “The waveforms produced were similar the previous nuclear test,” Earle said. More importantly, the magnitudes were both 5.1.

He added, that if it’s fully buried and contained, the seismic magnitude is going to be larger.*

The White House has said that the test likely was not of a hydrogen bomb. Others were more cautious. James Acton, from the Carnegie Endowment for International Peace, said the quake’s magnitude indicates a nuclear explosion of 10 kilotons, or no more than one-third of the expected yield of the smallest hydrogen bomb. (In terms of what most people would call a hydrogen bomb.)

“If 10 kilotons is correct, that would appear to be too small for a successful test,” Acton said.

But there’s still uncertainty as to the depth at which the explosion occurred.

Moreover, the test could have been for a so-called “boosted bomb": a relatively low-yield, not very destructive type of bomb, with some of the same characteristics of a conventional hydrogen bomb. A boosted weapon uses some fusion to boost the fission process of a conventional bomb. It’s fundamentally different from what most would call a real H-bomb, but it could still be an ominous sign.

“If this is a boosted test, which could reasonably be described as a hydrogen bomb, then this is a significant step toward high-yield warheads that could be fitted onto ballistic missiles,” Acton said.

In the military, the task of verifying what sort of nuclear test occurred belongs to the Air Force Technical Applications Center, or AFTAC, at Patrick Air Force Base, Florida. So far, the military’s preliminary seismological data concurs with that of USGS, indicating a 5.1 magnitude quake at the location of the previous nuclear test. They acknowledge that they, too, don’t have any seismographs in North Korea.

But seismographs aren’t only tool the military uses to detect and measure bomb blasts. “AFTAC has airborne capabilities to be able to fly to suspected areas to do air sampling. From the air samples, further analysis can be done,” said AFTAC spokeswoman Susan Romano. The center collects air samples with two Boeing WC-135 Constant Phoenix planes, based out of Nebraska. One was deployed after the 2013 test. The analysis could include screening for tritium, a common element in boosting.

The Washington Post reports that a WC-135 was deployed to the region.

Correction: An earlier version of this article quoted Earle as saying that if it is fully buried and contained, the seismic magnitude of an underground nuclear blast is going to be "smaller." Earle intended to say that it would be "larger."