Here’s How Multi-cloud Is Driving the Future of Government Work
Skip to Content
Get all our news and commentary in your inbox at 6 a.m. ET.
Threats
Inside the Weirdest Relationship a NATO Ally Has with Russia

KIRKENES, NORWAY — One tree-lined kilometer back from NATO’s northernmost border with Russia, a Norwegian sergeant sorts through his gear in a wood-trimmed guardhouse: multiple layers of cold-weather gear, his rifle, a combat helmet — and a pocket-sized flag of the Russian Border Service, a tongue-in-cheek testament to an unusual post-2014 working relationship between a member of the Western alliance and its looming neighbor to the east.

The sergeant and his comrades who man this 196-kilometer frontier are Army soldiers, not the blue-hat border guards who patrol most of Europe’s external borders. They are a tripwire: a clear signal to Moscow that any incursion would be the kind of military-on-military engagement that could trigger an alliance-wide armed response under NATO’s Article 5. But out on patrol, he says, he and his Russian counterparts acknowledge each other with salutes. And that’s hardly the only cordial interaction across the border, which sees regular contact between the two countries’ border commissioners and regional officials. Nearby residents visit each other’s countries for days at a time on locally issued permits.

The relationship between Norway and Russia is complicated and can be difficult to explain to the rest of the West. It’s particularly difficult with the U.S., which tends to be “binary” in its view of Russia, regarding it as either the greatest threat the West faces, or a country that could have become a deep geopolitical partner. So we heard a lot about the nuances of the relationship early this month, as Defense One travelled across Norway with a group of American analysts and national-security officials on a trip organized by the Atlantic Council, a NATO-oriented think tank in Washington; and sponsored by the Norwegian government.

“We have a long cooperation with the Russian border guard, which is the FSB,” Russia’s internal security service, said Lt. Col. Joern Qviller, who commands the Norwegian battalion in Kirkenes. “We have a professional relationship, and we have interaction on a weekly and monthly basis – routine meetings, but also practical tasks that need to be solved. That could be marking the border to check into border crossings and so on, and we do that together.”

That builds a certain amount of trust, but “it just goes so far,” he said. 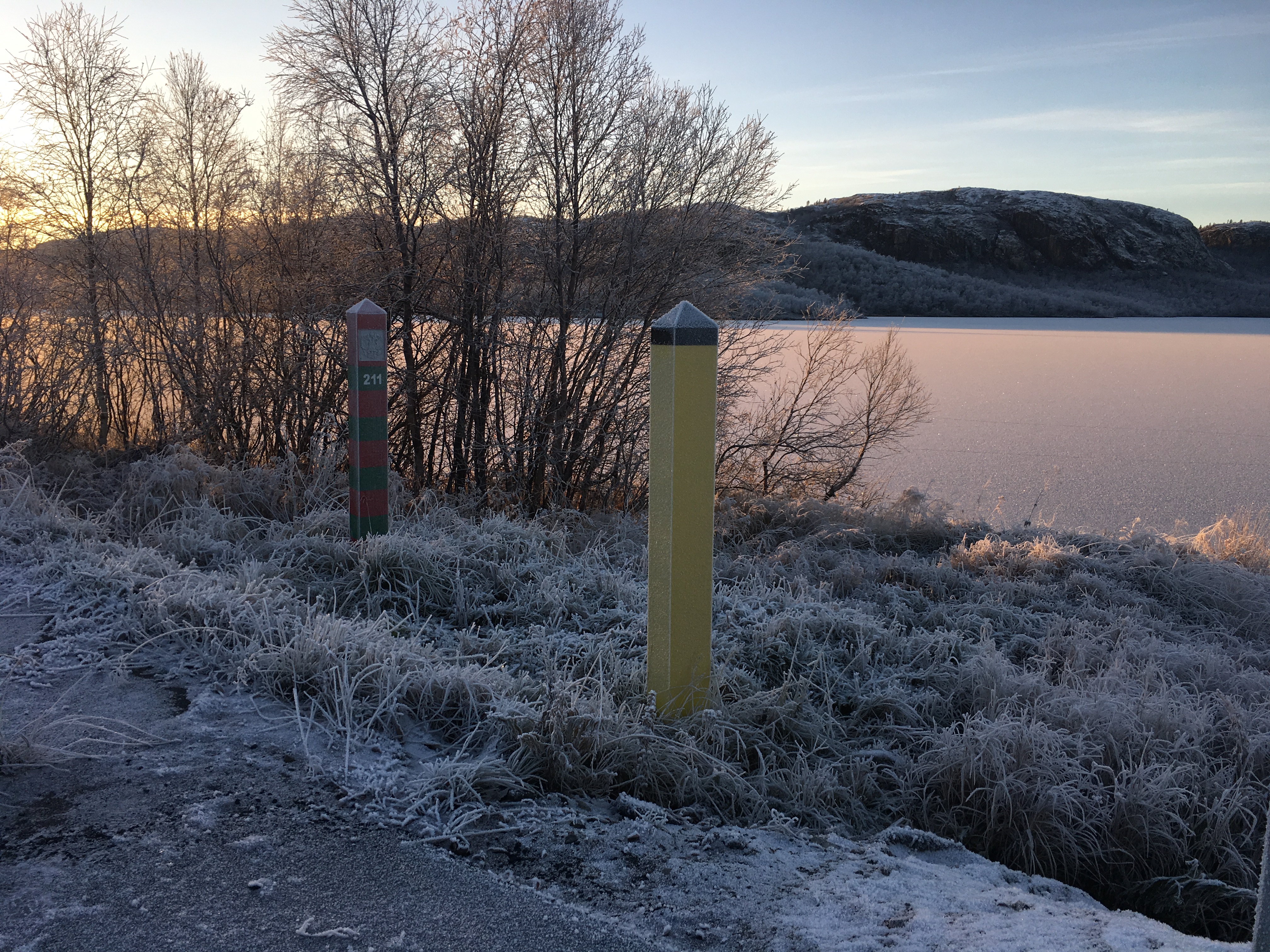 The border line itself is extremely clear, marked by two sets of stanchions about shoulder-height on any adults who might walk by. The Norwegian ones are painted yellow; the Russian ones, the red and green of the FSB Border Service. They’re easy to see across the rugged terrain, thanks to border agreements that stipulate an eight-meter-wide clearing of any vegetation tall enough to obscure them.

So does each country trim the four meters on its side of the border, leaving a tiny strip of untouched growth down the middle — like suburban neighbors silently feuding over mowing the meeting point of their lawns? No, one official told us, it’s another “opportunity for cooperation.”

There’s a lot of opportunities for cooperation, depending on whom you talk to here in Kirkenes.

Five years ago, Russia and Norway agreed to allow residents within 30 kilometers of the border to apply for a permit that allows them to cross sans passport or visa and stay for up to 15 days. Now the 10,000-odd Norwegians and Russians who did so cross regularly enough to make up the majority of the over-200,000 legal border crossings that have happened so far this year. Most cross for daylong shopping trips — commodities in Kirkenes, cheaper gas in Russia, and the like. All of them pass through the region’s one legal crossing that’s situated right outside Kirkenes. Its frosty road signs, like many around here, are written in both Norwegian and Russian, and on the Norwegian side, the building is staffed by civilian police — not Qviller’s soldiers — and decorated with a bear pelt on the wall.

“But not the Russian bear,” an officer quips.

That’s established a strong commercial bond between the northern Finnmark region on the NATO side, and the area northwest of Murmansk on the other. This is supplemented by a concerted effort — annually about 30 million kroner, or about $3.5 million, of effort — to deepen the cultural ties between the two countries. Working through the International Barents Secretariat, Norway’s Ministry of Foreign Affairs funds cross-border school-exchange trips, musical performances, art installations, hockey leagues, and more.

Even if the national-level relationship has been “on ice” since 2014, the regional communication continues, one local official told us. “It’s soft security,” he said.

That all ‘just goes so far’

To some Western foreign policy thinkers, the idea of a couple thousand Russians regularly crossing the border into an isolated region of a NATO ally is deeply unsettling. Hybrid warfare will look different for each country Russia may target, but cultivating ties with Kremlin representatives and Russian citizens could seem an easy pretext for Crimea-esque “little green men” to invade.

Certainly, Russian officials in Finnmark have worked to shape public opinion. Last year, for example, Moscow’s diplomats in Kirkenes prevented a touring musician  from playing a song by Russian punk-protest band Pussy Riot at his Kirkenes concert of banned songs. More ominously, they have attempted to restrict free and independent journalistic coverage of the region.

Security officials tell us that local residents aren’t terribly concerned about Russia — hybrid threats or otherwise. But the military, local police, and civilian border commissioner’s office have exercises a couple times a year to wargame what a hybrid threat could look like.

And the border guard, for all the professional relationships they maintain, is still here for a military purpose. Out at an observation post overlooking the Pasvik River, up three flights of metal stairs and a ladder, two teenage soldiers tell us about their surveillance of movements along the border. On clear days, they can look across and see their Russian counterparts in the mining town of Nikel — something like staring across into Mordor, one of the Norwegian officials said. But that day, a snowstorm had rolled in, the slow-moving flakes obscuring anything past the river that divides East and West.

Another member of our traveling group notes a pair of anti-laser goggles next to a bank of computer screens hooked to infrared sensors and other systems. A necessary tool for cross-border surveillance, or just a precaution? Are FSB border police shining lasers to dazzle the Norwegian guards?

“We have solved issues before in that place,” Qviller, the commanding officer, says. But if there are any incidents between the two sides, near that observation post or elsewhere, he’s “certain that misunderstandings and behavior that is not meant to be aggressive is being dealt with.”

A ‘natural’ return to military posture in the North

If an incident occurs, there’s a standard resolution process between the two sides’ border commissioners. If it involved the Russian Army, it would route up through Qviller’s military chain of command. Such routines and procedures allow the two countries to interact smoothly even as the political situation alters their own mission focus.

The border battalion has three missions: sovereignty, surveillance, and law enforcement. On the border, they are both soldiers and police, depending on the situation. As Cold War tensions subsided in the 1990s, Qviller’s unit focused on law enforcement.

“Now the changing situation means that the sovereignty part is getting more focus and will get more focus in the years to come,” he said. “We are adjusting according to the political situation.”

It’s not just a conceptual shift. The government’s new Long Term Defence Plan, presented to Parliament last year, will send another 150 soldiers, 46 officers, and anti-armor and light anti-aircraft weapons to the Kirkenes garrison. That’s a natural evolution, Qviller tells us: “We used to be a robust and big infantry battalion earlier with heavy weapons, and this period is coming back. It’s more or less about finding our way back to how we were in the beginning of the ’90s and being able to restore our unit.”

The plan will also have Norway gradually increase its defense spending over the next four years, adding about $860 million to its 2016 budget of $6 billion. And the new Land Power Study recently presented to parliament also calls for shifting more forces north to deter Russian aggression.

In Oslo, government and military officials couple careful messaging and directness: Norway does not view Russia as an imminent military threat, but as the “dimensional factor” shaping its military investments and growth.

“We need to improve our preparedness, we need to get our reaction time down,” Ministry of Defense State Secretary Øystein Bø said. “Before we had some units that needed 180 days to be prepared. Now we are not speaking about days and weeks anymore; we’re speaking about hours. When you see how Russia has modernized their armed forces with less mobilization time, more mobility, more agility, we also need to be better prepared.”

That also means investing in high-end platforms to counter other aspects of Russia’s military threat. Norway has ordered five Boeing P-8A Poseidon maritime patrol aircraft to replace its aging P-3 Orions and beef up its anti-submarine warfare capabilities. Officials said the program has the added benefit of strengthening ties with two particularly valued NATO allies: the U.S. and the United Kingdom.

When Defense One visited with a similar delegation in January, Norwegian defense officials wondered nervously what Donald Trump’s election would mean for the alliance. Ten months later, officials said, those concerns have largely been allayed.

Though he has continued to criticize member nations for low defense spending, Trump has not repeated his campaign-era indictment that NATO is “obsolete.” And after months of heartburn for some NATO states and even some in his own administration, Trump affirmed the U.S.’s commitment to Article 5 in a June press conference. With that statement on the books, Norwegian officials said they pay less attention to what the White House says — on social media or elsewhere — and more to what the rest of the administration does. Like many allies these days, Norwegian defense officials stressed the strength of the military-to-military relationships with the U.S.

“From the Pentagon, they say and do all the right things,” one said.

They’re encouraged by visits this year from the Pentagon’s top uniformed and civilian officials, and by the presence of the U.S. Marines who arrived in the western Norwegian city of Trondheim for a rotational deployment.

Norway isn’t worried about an imminent act of Russian aggression — but if it were to come, officials are well aware the country’s long-term security depends on the NATO alliance. So they’re deepening ties with NATO, while nurturing professionalism on the frontier.

NEXT STORY: Army Chief: The US Needs More Troops in Europe