Shifting Left: How DevSecOps Strengthens Agency Security and Risk Management
Skip to Content
Get all our news and commentary in your inbox at 6 a.m. ET.
Threats
Global Conflicts to Watch in 2018

The U.S. is now the most unpredictable actor in the world today.

By Uri Friedman and Annabelle Timsit,
The Atlantic

As conflicts ignite and burn and flicker out around the world, U.S. officials assess the dangers they represent back home. Not all of these conflicts directly threaten American interests, which is why the Council on Foreign Relations conducts an annual survey to help U.S. leaders prioritize threats in the year ahead. For the past decade, this survey has focused on the risks posed to America by foreign actors. Now it’s reckoning with the risks America poses to the world—and to itself.

“The U.S. is now the most unpredictable actor in the world today, and that has caused profound unease,” said Paul Stares, the director of CFR’s Center for Preventive Action, which produces the annual survey. “You used to be able to pretty much put the U.S. to one side and hold it constant, and look at the world and consider where the biggest sources of unpredictability, insecurity are. Now you have to include the U.S. in that. … No one has high confidence how we [Americans] would react in any given situation, given how people assess this president.” This president might welcome the development. “I don’t want people to know exactly what I’m doing—or thinking,” Donald Trump wrote in 2015. “It keeps them off balance.”

America’s newfound unpredictability is most evident in two scenarios that emerged as the highest-priority risks identified by this year’s report, which drew on the feedback of 436 government officials and foreign-policy experts: 1) military conflict involving the United States, North Korea, and North Korea’s neighbors, and 2) an armed confrontation between Iran and the United States or a U.S. ally over Iran’s involvement in regional conflicts and support of militant groups.

“They’re the two most volatile, brewing crises at the moment,” Stares said. “Some would say it’s a good thing that people are guessing and this is all a concerted effort to increase [America’s] bargaining leverage with North Korea or with Iran. I think most professionals would say that is not a smart strategy: It can backfire, or lead to miscalculation, misunderstanding, and so on.”

In the survey, which was conducted in the first half of November, during a temporary pause in North Korea’s nuclear and missile testing, the consensus assessment was that a conflict with North Korea would have a “high” impact on U.S. interests but was only “moderately” likely. (To say a conflict with North Korea would be high-impact is quite the understatement—most experts believe it could lead to the most ferocious fighting since World War II.) Stares noted that while last year’s poll had flagged “a severe crisis in North Korea” over its nuclear-weapons program as a first-tier risk, displacing the Syrian Civil War as the premier conflict to watch in the survey, what’s new this year are serious worries about direct military hostilities between North Korea and the United States—and implicitly about those hostilities escalating to the first exchange of nuclear weapons in history.

“Now the concern is clearly that any renewed fighting on the [Korean] peninsula could involve the use of nuclear weapons,” Stares said. “People’s perceptions of what a war would look like” have changed, he explained. There are three main reasons for this: the intensely personal war of words between Donald Trump and Kim Jong Un; North Korea’s rapid advances in developing a missile that can reach the United States and a nuclear warhead small enough to fit on it; and the repeated threats by Trump and his advisers to take military action if they feel it necessary.

The survey’s finding echoes recent estimates by knowledgeable observers such as James Stavridis, a retired Navy admiral, and John Brennan, Barack Obama’s CIA director. Stavridis has put the odds of a non-nuclear U.S.-North Korean conflict at anywhere from 20 to 50 percent, and the odds of nuclear war at 10 percent—perhaps, for example, if North Korea shoots down a U.S. warplane or launches a missile near the U.S. territory of Guam, prompting an American response and then a spiral of retaliation. In an interview with The Atlantic, Brennan cited Trump’s unpredictability as a critical factor in why he pegged the chances of war at 20 to 25 percent. “I have a pretty good sense that North Korea does not want to initiate a major military conflict. And for many years, the United States was loath to initiate” a conflict, Brennan said. “I don’t know what Mr. Trump is capable of deciding or doing.”

Trump’s iffy commitment to the Iran nuclear deal, which he “decertified” and sent to Congress for repairs, and which he still might withdraw from, also seems to have created risk. There is now an elevated likelihood of U.S.-Iranian confrontation over a range of explosive issues—from Iran’s missile and nuclear programs, to its jockeying for influence in Syria and Iraq, to its support for Yemeni, Lebanese, and Palestinian militant groups that the United States and U.S. allies such as Israel and Saudi Arabia fiercely oppose. As with a North Korean conflict, the survey participants deemed a clash between Iran and the U.S. or its partners to be high-impact and moderately likely. The scenario didn’t appear in CFR’s report last year, when Iran was engaged in many of the same activities but the future of the nuclear agreement wasn’t yet in doubt.

Other scenarios in this category include a mass-casualty terrorist attack on the U.S. homeland, a major cyberattack on U.S. critical infrastructure, and two surprising contingencies given how quiet each front was in 2017: military confrontations between Russia and nato members, or between China and one or more Southeast Asian nations over territorial disputes in the South China Sea.

The apprehension about a Russia-nato feud “may just reflect a deterioration of U.S.-Russia relations. With further revelations of Russia meddling [in the 2016 U.S. presidential election], and in the context of that, a flashpoint somewhere in Eastern Europe could escalate,” Stares explained. Meanwhile, following Xi Jinping’s success in consolidating his power at a Communist Party conference in October, “people may feel that, with the internal [Chinese political] situation more settled, the Chinese may once again be more assertive in the South China Sea.”

Also among the first-tier risks are two possibilities that were considered highly likely but only of moderate impact for U.S. interests: a worsening of the war in Afghanistan, where the Trump administration has made an indeterminate commitment to stay the course, and a surge in violence as Syrian President Bashar al-Assad reasserts control over his devastated country. Remarkably, the further breakup of Iraq, a first-tier priority two years ago and a second-tier priority last year, made no appearance in this year’s poll. Nor was the Islamic State specifically mentioned in this year’s list of contingencies, despite enduring anxiety about terrorist attacks. On Saturday, Iraq’s prime minister helped illustrate why: Iraqi and allied forces, he claimed, have now fully liberated his country from isis. (The attempted bombing at New York’s Port Authority on Monday demonstrates how the threat of terrorism can linger even as ISIS hemorrhages territory. 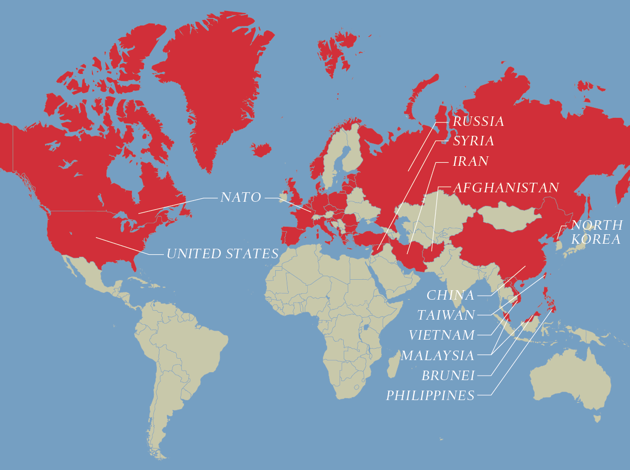 Only one of the second-tier risks in this year’s survey was judged high-impact for American security interests, though unlikely: an armed confrontation in the East China Sea between Japan and China over disagreements on the sovereignty of the Senkaku/Diaoyu Islands.

Highly likely but low-impact scenarios included deepening economic and political turmoil in Venezuela; a deterioration of the humanitarian disaster afflicting Yemen, where a civil war compounded by a Saudi-Iran proxy fight is raging; persistent al-Shabab terrorist attacks in Somalia; and a swelling of violence between government forces and Muslim Rohingya in Myanmar—a conflict that UN officials have described as a possible “genocide” and which the CFR survey failed to predict last year. (In these surveys, humanitarian crises tend to receive far less emphasis than threats involving terrorism, nuclear proliferation, and the commitment of U.S. troops.)

Other conflicts were considered both moderately impactful and moderately likely: increasing organized crime–related violence in Mexico, which holds general elections next year; growing violence in Eastern Ukraine between Russian-backed militias and Ukrainian forces; intensified violence between armed Kurdish groups and government forces in Turkey and Iraq, where this fall the Kurds tried and failed to achieve independence through a referendum; a major military confrontation between Pakistan and India as a result of terrorism or unrest in Indian-administered Kashmir; heightened tensions between Israelis and Palestinians (the poll was conducted before the Trump administration decided to recognize Jerusalem as Israel’s capital and move the U.S. embassy there); and clashes between Israel and the Iran-allied militant group Hezbollah in Syria or along the Israel-Lebanon border—a new scenario in this year’s survey whose odds, as the Israeli ambassador to the U.S. recently put it, are “higher than people think.” 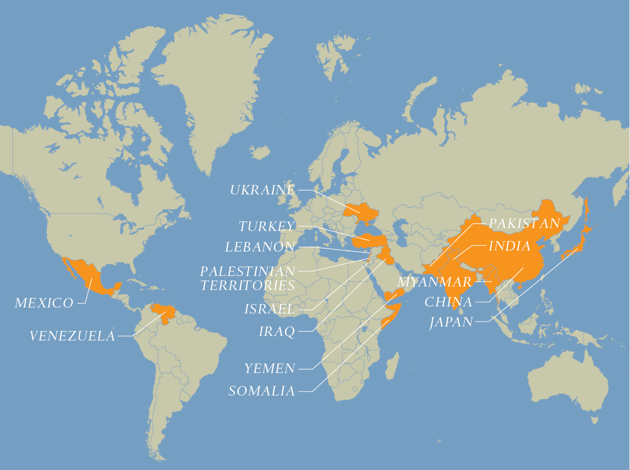 Nearly all of the third-tier scenarios are in Africa—a reflection not of the level of conflict on the continent but of how the respondents weighted the impact of those conflicts on U.S. interests relative to conflicts in Asia, Europe, and the Middle East. One exception is a scenario that hasn’t shown up in past surveys: the potential for political disturbances and extremist violence in the Balkans, where instability shook the world before World War I and in the 1990s. Among the other contingencies in this category: mounting political violence in the Democratic Republic of Congo, where 15 UN peacekeepers were just killed in an attack, and unrest in Zimbabwe linked to the succession of Robert Mugabe, who was recently removed by the military after close to 40 years in power. Notably, violent upheaval in post-Qaddafi Libya was downgraded this year from a second-tier to third-tier concern. 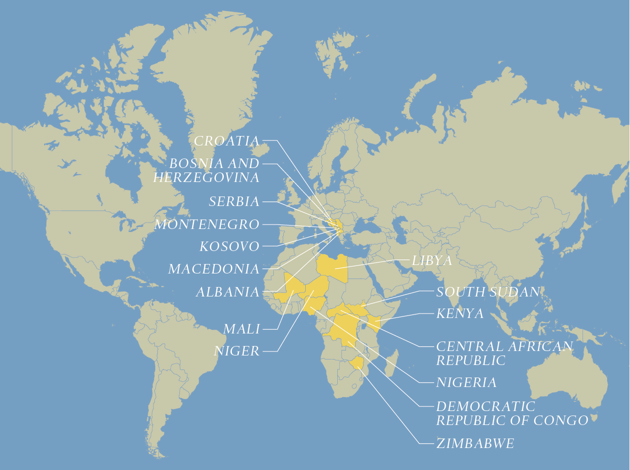 Respondents also wrote in scenarios that didn’t appear among CFR’s list of 30 possible conflicts, including political instability stemming from nationalist and separatist movements in the European Union. Catalans, for example, recently voted in favor of independence from Spain and Corsican nationalists just won local elections on a platform of securing more autonomy, and perhaps secession, from France. Others noted the potential for increased terrorist attacks in Egypt’s Sinai Peninsula. Ten days after the survey concluded, militants killed more than 300 worshippers at a Sufi mosque in the Sinai.

Stares said that when CFR asked people on social media for scenarios to include, there were “lots of wild ones, like ‘Trump declares war on China.’ But unless you’re getting a significant number of people all saying the same thing, we typically dismiss them as random outliers.” What’s perhaps most striking about the latest survey is that when CFR asked government officials and foreign-policy experts to peer into the near future, war between two nuclear-armed states wasn’t dismissed as a wild outlier. It wasn’t downplayed as a middling threat. Instead, it shot to the very top of risks in the coming year.