Weeks after Tillerson said the U.S. and Russia share a postwar vision, Votel says Moscow is playing both “arsonist and firefighter.”

Russia does not want — or is unable — to help end the Syrian war, and instead has become an “incredibly destabilizing” force in the region, the top U.S. general for the Middle East warned Congress.

Gen. Joseph Votel’s blunt assessment comes just one month after Secretary of State Rex Tillerson said he believed Russia was “very well aligned” with Washington’s desire to end the war with a unified Syria. But Russian actions since have fallen short of any partnership toward peace; on Tuesday, Votel repeatedly said Moscow should be held accountable for stoking the conflict.

Even Tillerson saw potential problems. Moscow’s failure to live up to a 2013 agreement to remove chemical weapons from Syria leaves it responsible for January’s gas attacks on civilians, he said last month. And on Feb. 7, Pentagon leaders have said, U.S.-led coalition forces killed or wounded 300 Russian-backed fighters who attacked a coalition base in southern Syria. And on Saturday, the UN Security Council voted unanimously for a ceasefire, but Moscow dragged its feet until Monday before agreeing to five-hour truces to allow civilians to escape regime bombardments in the district of Eastern Ghouta.

“Russia has failed to follow through on delivering the regime in a number of different areas,” Votel, head of U.S. Central Command, told the House Armed Services Committee. “As we look at the UN-sanctioned ceasefire that was put in place, one that they helped draft and agreed to implement and cause the [Syrian] regime to comply by it — they have failed to do that.”

“I think either Russia has to admit that it’s not capable or it doesn’t want to play a role in ending the Syrian conflict, here. I think their role is incredibly destabilizing at this point,” he said.

After the hearing, Votel said he was not trying to refute the chief diplomat’s previous assessment of Russia’s intentions.

“My perspective is kind of on the here and now. That’s what I’m thinking about. I’m certainly not trying to contradict Secretary Tillerson,” he said.

After a bloody week of shelling killed more than 500 people in eastern Syria, the UN Security Council agreed on Saturday to press for a 30-day ceasefire. Instead, government and rebel forces continued to exchange fire, killing several dozen more.

“I think that the president put the Assad regime on notice some time ago, and we’re continuing to echo that message,” White House Press Secretary Sarah Sanders said Monday. “When I said that we call for an immediate end to these offensive operations, we mean it. But in terms of any specific action, as we’ve said before, I’m not going to broadcast what we may or may not do.”

In November, President Donald Trump and Russian President Vladimir Putin issued a joint statement, agreeing that the Geneva peace process, not military action, would resolve the Syrian conflict. Sanders said the two had not spoken in the few days of continued violence after the UN-brokered ceasefire.

Several lawmakers asked Votel about Israeli security, and Iranian support for extremist groups along the Syrian border. The general again said Russia was not doing enough in Syria’s southwestern corner, and particularly around Idlib.

“These are becoming collection zones for a lot of unsavory organizations, right here, and eventually they’re going to have to be dealt with. And so I’m concerned that left unaddressed they’re going to become bigger problems,” he said. “What we have seen in places like Idlib and others are where these groups that have come together are — do potentially pose long-term challenges for security in the region, above and beyond Syria.”

Farther north, Votel said Russia was adding powder to another keg: the tension in Afrin between Turkey, the city’s Kurdish administration, and the Syrian regime.

“On the diplomatic front, Moscow is playing the role of arsonist and firefighter – fueling the conflict in Syria between the Syrian Regime, YPG, and Turkey, then claiming to serve as an arbiter to resolve the dispute,” Votel said in written testimony.

“I think there certainly has to be more accountability and pressure put on Russia to do what they said they were going to do,” he said, later in the hearing.

Votel dismissed Russia’s efforts to organize alternative peace talks on Syria and Afghanistan. He said Moscow was attempting “to thwart the UN’s role and limit the advance of American influence. Russia’s insistence on a separate Syrian political peace process at Astana and Sochi detracts from the internationally-sanctioned UN talks in Geneva.”

In his testimony, he wrote, “Russian and Iranian-led Astana talks have been far less successful, and Russian bombardment of the Astana agreed de-escalation zone in East Ghouta calls into question Moscow’s sincerity in guaranteeing the security of these areas.”

“I think part of what you see is that what Russia says is not necessarily what Russia does,”

committee chairman Rep. Mac Thornberry, R-Texas, told reporters after the hearing. “So they may dress up in firefighter suits, but they’re the arsonists, enabling the Syrian regime and the Iranians to continue and expand the conflict and commit terrible humanitarian disasters.” 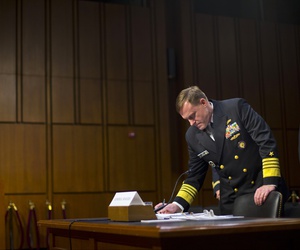 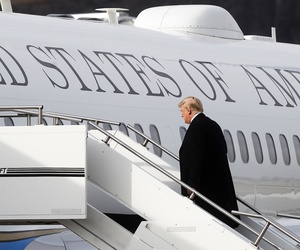 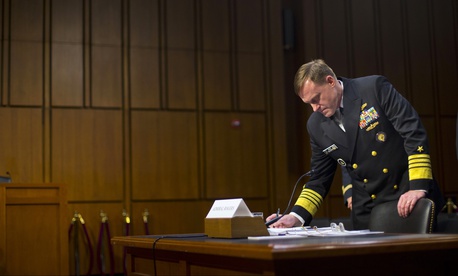 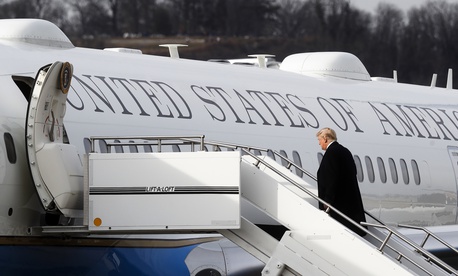