The Military Must Hunt Corruption, Not Just Terrorists

Too often, strategists don’t see corruption for what it really is: a national security threat. Read the first in a new exclusive series. By Sarah Chayes

Editor’s Note: The following is the first installment of an occasional series by Sarah Chayes, exclusively for Defense One, examining the nexus of corruption and security threats in hotspots where the United States is likely to be engaged.

As popular uprisings keep toppling governments like bowling pins, the latest round has morphed into a great power face-off — with Russia and the West glowering at each other across a divided Ukraine. Thailand, a key United States military friend in Southeast Asia, could be next on the list. Thousands of protests rock Chinese provinces each month, worrying President Xi Jinping’s still-green administration. The Egyptian and Syrian revolutions have spun off into bloody and widening strife, while extremist insurgencies in Afghanistan, Nigeria and the Philippines stubbornly challenge state stability.

What links these far-flung events, most of them high on the U.S. list of security priorities? Corruption. Not garden-variety corruption, the kind that exists everywhere. Acute and systemic corruption has taken hold in these countries. And it is driving indignant populations, who are networked and communicating as never before, to extremes. Around the world, pervasive corruption drives a list of other security risks too, such as terrorist facilitation; traffic in weapons or drugs; nuclear proliferation; theft of intellectual property; fractured financial systems; and governments that are enmeshed with transnational criminal superpowers. And yet, U.S. military and intelligence officials seem blind to both the character and the security implications of this type of corruption. Like an odorless gas, it fuels all these dangers without attracting much policy response inside or outside of Foggy Bottom.

It’s time to start paying attention. For, if military and civilian strategists agree on anything these days, it’s the need to reduce U.S. reliance on military responses to overseas crises. But to get there, containing military spending or constraining our forces’ missions won’t be enough. For starters, U.S. national security leaders urgently need a better grasp of the factors that build these crises. Then they must design and implement more precise and effective interactions with those factors upstream, before crises develop. 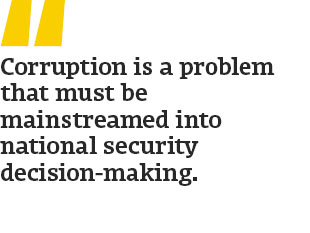 Acute corruption, in other words, can no longer be seen as just a nuisance or a “values issue” to be handed off for technical programming to the U.S. Agency for International Development. Even less should it be considered a factor of stability, as some maintain. Corruption is a problem that must be mainstreamed into national security decision-making. For military leaders, that means tasking intelligence collectors and analysts with new questions. It means better tailoring the terms of military assistance and the tenor of military-to-military relationships. And it means changing the ways that forward-deployed units gain access to territory and partner with locals once there.

The alternative has too often proved ugly. The case of Afghanistan is perhaps the most egregious — because for years, the United States possessed almost perfect leverage. But at every echelon, short-term security imperatives repeatedly trumped corruption concerns. Battalion commanders got cozy with police officials whose men were shaking down locals at every checkpoint, with a blow or an insulting sneer, or were imprisoning people for ransom, or demanding young sons for service as tea-boys – and other activities. Diplomats stood shoulder-to-shoulder with provincial governors who were key nodes in predatory government networks. The CIA insisted on secretly paying off key assets, including Afghan President Hamid Karzai. And it wasn’t just the military that looked the other way. Senior civilian officials repeatedly shirked the issue. In this context, efforts to curb venal activities or even reduce the active support given to corrupt networks were negligible compared to the blatant reinforcement.

And Afghans were watching. “People think the Americans must want the corruption,” a former Kandahar neighbor remarked when news of CIA payments to Karzai became public. Many, initially thrilled to be rid of the Taliban, became frustrated with the corrupt system they blamed the U.S. for enabling. And after a few years, they became susceptible to Taliban propaganda again, which blamed the U.S. for supporting Karzai’s mafia government. Thus, the very threat that the short-term thinking sought to minimize was instead expanded.

It’s a pattern that the U.S. repeats again and again, when U.S. civilian strategists and military operatives deal fulsomely with corrupt officials in places like Algeria, Bahrain, Ethiopia, Jordan, Nigeria, Yemen or other such countries, while averting their eyes from official looting in the name of security.

When that looting gains international attention, it is usually the capture of fabulous “rents” by regime elites that grabs headlines. Viktor Yanukovych’s eye-popping pleasure palace is just the most recent example of such booty. The Nigerian central bank governor was fired in February for daring to try tracing an estimated $20 billion that disappeared from the country’s oil revenues over an 18-month period. Nigerians and Western officials alike judge that most of the money landed in the personal accounts of President Goodluck Jonathan. Yet, while condemning the sadistic attacks of Boko Haram insurgents, U.S. officials have failed to express concern about the acute corruption that may have helped launch the group.

In Uzbekistan, Islam Karimov’s daughter Gulnora ran a pay-to-play toll booth for international investment in the telecom sector for years. In Tunisia, which touched off the wave of upheaval across the Middle East beginning 2011, the family of ousted leader Zine al-Abidine Ben Ali used the private financial sector like a piggy bank, awarding loans to cronies and then recapitalizing the banks out of public funds.

Western analysts and decision-makers tend to discount what they call “petty corruption” — constant police shake-downs in the guise of traffic enforcement; demands for payment by school principals, doctors, or even the clerk in charge of filling out death certificates, which happened in one case I witnessed in Afghanistan; and systematic sale of judicial decisions. Many Westerners describe such abuses as merely the greasing of the wheels necessary to “get things done” in developing countries. In fact, such injustices and humiliations are sources of daily outrage to citizens of a dozen countries I’ve studied over the past several years. And they are intimately linked to the rent-seeking at the top. For these corrupt networks are vertically integrated. In Afghanistan, the Kandahar bench pays a monthly cut of the bribes local judges extort to the chief justice of the Supreme Court, according to public prosecutors. Uzbeks say villagers frequently pool their money to help a native son buy his way into the police. Then the young man has to extort bribes from motorists, since he has two debts to pay: one to his neighbors and the other, the regular cut he owes his superior. 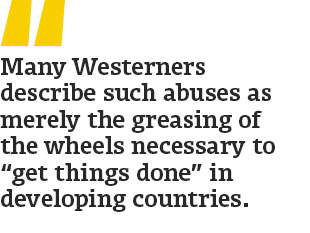 As is often the case, the first obstacle to improved policy responses is a knowledge gap. The military, the intelligence community and embassy staffs need to get smart. If certain countries are, in effect, governed by criminal syndicates in disguise, and the capture of resources for personal benefit is these networks’ primary aim, then they must be studied in those terms. Where are the spiderweb charts like the ones any battalion intelligence officer would brief at a morning meeting in Afghanistan, mapping the links within ruling networks? What is known about key enablers inside and outside the country? What are the favored revenue streams? Like any crime gang, such governments need to be subjected to this kind of analysis.

Of course, no single driver can be solely blamed for such complex phenomena as insurgency, revolution, economic depression or the partial capture of states by transnational criminal organizations. Other factors, conjugated with kleptocratic governance, increase the likelihood of a severe international security event occurring. If acute corruption indicators had been analyzed together with demographic markers as risk factors in 2010, most of North Africa would have been blinking red well ahead of the Arab Spring uprisings, and their increasingly dangerous aftershocks.

Is there a terrorist or drug-trafficking network near a corrupt country that is determined on exploiting local grievances or finding a leader to co-opt? Is there a preexisting separatist movement? An ethnic split, or severe localized economic disparities? Some of this information already exists in the vast databases available to military and intelligence analysts and the policymakers they serve — yet in my experience, it is rarely queried. Often, it is not gathered at all, as collectors focus their efforts on targets to kill or capture and diplomatic staffs spend their time with their host-country counterparts.

And what to do with such information if we had it? Curbing or rolling back entrenched corruption is a monumentally difficult prospect. Yet there are security advantages in visibly keeping a distance, even where U.S. policy changes won’t lead directly to reforms on the ground. At present, the U.S. government is hardly positioned even to try.

For the military, an analysis would return significant implications. A regime’s counterterrorism bona fides, for example, would no longer automatically trump concerns about its kleptocratic practices. Certain types of status-enhancing military equipment – such as fighter jets, tanks, or drones — might be withheld from such regimes. The U.S. might select which foreign security services to train and assist with more care, based on the role they play within the kleptocratic network, or a detested ruling clique’s ability to capture the military assistance as a rent. Forward-deployed units would have to know who they’re dealing with, and more realistically assess the costs and benefits of such relationships over time.

There is no cookie-cutter formula for designing new approaches. Each country’s criminal governing networks are structured differently; each will seize different revenue streams; each will present different threats for Americans to weigh. The policy trade-offs will differ in each case — as will available alternatives to the least-bad option. Good policy, in this as in so many other domains, will depend on sound and evolving knowledge.

Sarah Chayes is senior associate in the Democracy and Rule of Law and South Asia Program s at the Carnegie Endowment for International Peace. She previously was special adviser to Chairman of the Joint Chiefs of Staff Adm. Mike Mullen. In Afghanistan, Chayes was special advisor to Generals David McKiernan and Stanley McChrystal, commanders of the International Security Assistance Force, or ISAF, after living and working in downtown Kandahar for seven years  . 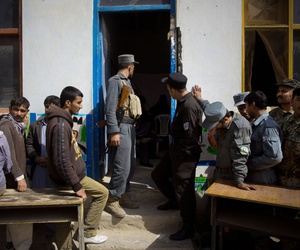 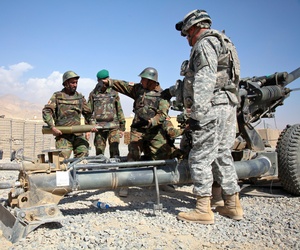 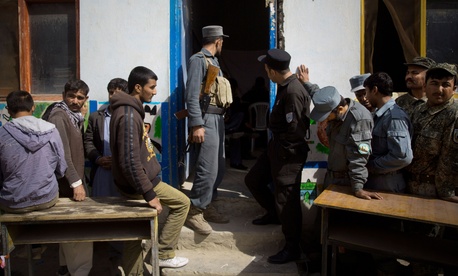 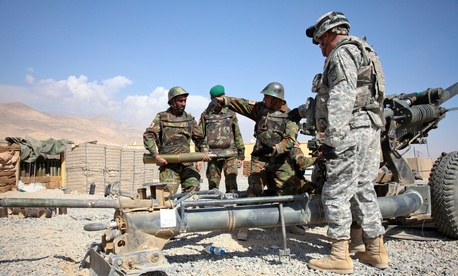