CDC and FEMA officials have drafted a plan to gradually reopen the country beginning May 1, the Washington Post reported Tuesday.

Critical caveat: “The president has not committed to following the guidelines delineated in the draft.” What is delineated in the draft obtained by The Post includes “granular instructions for a phased reopening of institutions such as schools, child-care facilities, summer camps, parks, faith-based organizations and restaurants.”

One stark warning: This *should* take a while. Or, as the draft warns, “Models indicate 30-day shelter in place followed by 180 day lifting of all mitigation results in [a] large rebound curve,” which means a community could get infected again if we suddenly pretended all is well; therefore “some level of mitigation will be needed until vaccines or broad community immunity is achieved for recovering communities.” And within the framework obtained by the Post, there is also a three-tiered system for communities with varying levels of exposure to the coronavirus to date.

Also: Keep those masks handy, because according to the plan’s first days of reopening — involving “K-12 schools, daycares, and locally attended summer camps, to allow the workforce to return to work” — “it is critical to strictly follow recommendations on hand-washing and wearing face coverings in group settings.” Read on, here.

CDC director: As many as 20 U.S. states could maybe possibly reopen on May 1, Dr. Robert Redfield said today on ABC’s “Good Morning America.” Said Redfield, “There are a number of states — 19, 20 states — that really have had limited impact from it. So I think we will see some states that are, the governors feel that they’re ready, we’re poised to assist them with that reopening.”

The number of coronavirus tests performed in the United States dropped 30 percent in the past week, and it’s not entirely clear why, Politico reports. One reason may be the Centers for Disease Control’s narrow criteria for who gets tested, guidelines that were last revised in March. Another is a shortage of collection swabs.

But slowing COVID’s spread — and safely reopening the country — requires a big expansion of testing, public-health officials insist. Why? “Expanding testing as much as possible is essential so officials have enough data to determine when it’s safe to lift social distancing measures and allow people to go back to work. Continued testing beyond that point will help officials detect — and stamp out — sparks that could set off new outbreaks,” Politico writes. Read on, here.

Across the pond: Norway’s PM set aside time to speak directly to the country’s children. Reuters has that heart-warming message for these unique times, here.

And south of the equator, “A 99-year-old World War II veteran in Brazil was released from hospital with military honors Tuesday after recovering from the coronavirus,” AFP reported Tuesday. “Second Lieutenant Ermando Piveta, who served in the Brazilian artillery in Africa during the Second World War, was brought out of Brasilia’s Armed Forces Hospital to trumpet music and applause… rais[ing] his arms in the air as he left after eight days as a patient.”

Did the Coronavirus Escape from a Chinese Lab? Here’s What the Pentagon Says // Katie Bo Williams: Gen. Milley, chairman of the Joint Chiefs of Staff, directly addressed ‘rumor and speculation’ that COVID-19 is a made-in-China weapon of war.

The US Should Help Iran Get the Coronavirus Under Control // Shervin Ghaffari: Easing sanctions will help confront a global pandemic and win back some goodwill from ordinary beleaguered Iranians.

Welcome to this Wednesday edition of The D Brief from Ben Watson and Bradley Peniston. Send us tips from your community right here. And if you’re not already subscribed to The D Brief, you can do that here.

Germany thwarts attacks on U.S. bases. German tactical police units just arrested four suspected ISIS members who wanted to attack U.S. military bases, AP reports from Berlin. The four men were snatched up early this morning “at various locations in the western state of North Rhine-Westphalia.”
As far as what’s known so far, “Prosecutors said the men joined the Islamic State group in January 2019 and were instructed to form a cell in Germany. They reportedly first planned to carry out an attack in Tajikistan but later shifted their target to Germany, including U.S. Air Force bases in the country and a person they deemed critical of Islam.” A bit more, here.
Egyptian police reportedly got into a gunbattle with at least seven suspected Islamic militants based in eastern and southern Cairo. Reuters has that one, here.

By the way: Iran has been hit so hard by the coronavirus, Israeli intelligence agents have reportedly deprioritized it as a national security threat. The New York Times buries that nugget, here. (h/t Michael Weiss)

U.S. issues guidance on North Korean cyberattacks. Pyongyang’s hackers are working overtime on financial theft, money laundering, extortion, and cryptojacking, according to a joint statement issued Wednesday by the Departments of State, the Treasury, and Homeland Security, and the Federal Bureau of Investigation, who offer updated guidance for, well, businesses and governments around the world on big and small things they can do to counter the various threats. Read that, here.

Meanwhile on Guam, the U.S. Air Force is messaging nuclear deterrence to whomever needs to notice. Fox News’s Lucas Tomlinson has the photo, here.
Recall that some 20 miles west-southwest of that packed runway, the aircraft carrier Theodore Roosevelt sits pierside, with 615 of its 4,865 sailors known to be infected with the coronavirus, and all but 819 moved into isolation accommodations ashore, according to the Navy’s April 15 COVID fact sheet. 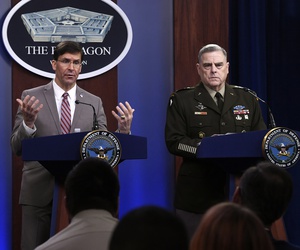 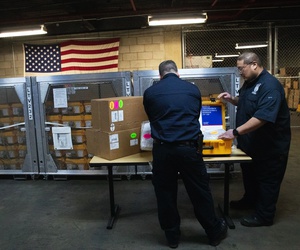 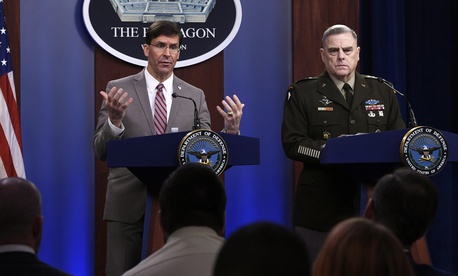 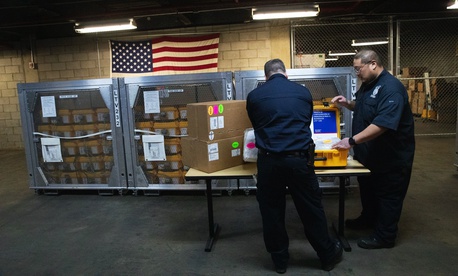