Building Stronger Public Health through the Pandemic and Beyond
Skip to Content
Get all our news and commentary in your inbox at 6 a.m. ET.
Ideas
Why the Next 'Great War' Won't Happen on China's Doorstep

Today’s rising China is nothing like the threat that rising Germany posed to Europe in 1914. Here's why. By Michael Hunzeker and Mark Christopher

By Michael Hunzeker and Mark Christopher

This month marks the 100th anniversary of the July Crisis, the event that led to World War I, and if you believe the alarmists then history is about to repeat itself. Sparked by Archduke Franz Ferdinand’s assassination, the Crisis saw a regional confrontation escalate unchecked into a continental war that consumed Europe’s great powers and drew in the United States. In the lead-up to this tragic anniversary, critics of President Barack Obama’s noninterventionism argue that we stand at the brink of another Great War for ignoring China, and its potential threat to Asia.

Historical analogies such as these are understandably seductive. They make complex issues seem simple. However, they are also deeply misleading, drawing parallels that don’t exist from a story that didn’t happen. History is not destined to repeat itself, unless those in power create self-fulfilling prophesies by drawing from the wrong lessons.

The first problem with using the “2014 is 1914” analogy is that it doesn’t even get the present right. In all the ways that matter, the Asia-Pacific region of today is unlike Europe a century ago. Although some international relations theorists point to overarching similarities – China is a rising power seeking to reassert regional dominance and the U.S. is a great power with a preference for the status quo – the specific parallels simply aren’t there.

Asia today lacks 1914 Europe’s competing webs of rigid alliances. There is no Serbia-esque regime yearning to carve an ethnically unified nation-state out of existing political boundaries. China is not encircled (the protestations of some of its military planners notwithstanding), nor does an insane monarch lead it. Asia is not swept up in a “Cult of the Offensive” – the shared belief that military technology makes it easier to attack than to defend. If anything, Beijing’s acquisition of anti-access/area denial weapons systems has convinced most strategists that defenders hold the upper hand. Globalized trade and production chains have increased the economic costs of war. And finally, for better or worse, we now live in a nuclear world. 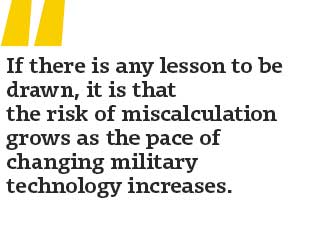 Nuclear deterrence makes unilateral aggression much riskier for China than it ever was for Germany. Conversely, if the nuclear balance were tipped by Japan, South Korea or – even more problematically – Taiwan acquiring nuclear weapons, the region would likely become far more volatile than pre-war Europe. In either case, nuclear weapons render the parallel obsolete.

The other problem with “2014 is 1914” thinking is that it also gets the past wrong. World War I was neither an unpredictable escalation nor the product of deliberate instigation. The war’s real cause was miscalculation.

When pundits suggest that 2014 Asia looks a lot like 1914 Europe, they are invoking one of two explanations for the cause of World War I. One suggests that pre-war Europe was a powder keg waiting to explode. The implication for today’s world is that a relatively minor provocation in the Asia-Pacific region – like ships bumping in the South China Sea or artillery exchanges on the Korean Peninsula -- could lead to an unintended escalation like the one that caused the First World War.

The other explanation for the war compares today’s China to Kaiser Wilhelm II’s Germany, stoking fears of rising undemocratic powers with revisionist agendas. Here, the worry is that China will deliberately engineer and manipulate a minor crisis – possibly in the South or East China Sea – to bring about a general conflagration it supposedly wants.

Both of these descriptions miss the mark. As the 1914 July Crisis got underway, there was willingness on all sides to risk conflict due to the perceived benefits of a regional or continental war. Tragically, although national leaders understood how the alliance dynamics would play out once the fighting started, they could not foresee the effect of modern weapons, which bogged down the fighting into a brutal stalemate.

This point highlights the one lesson from 1914 that might be relevant to today’s world, but which is lost in the punditry: rapid technological change increases the risk of political miscalculation. In 1914, Europe’s leaders willingly risked war because they did not – and could not – understand how such a war would unfold given the proliferation of new weapons over the preceding decades. Today, the leading edge of a revolution in military affairs gives rise to a similar dynamic.

Precision, energy, and cyber weapons – not to mention more esoteric tech like unmanned aircraft, space-based platforms and robot cheetahs – are now displacing “traditional” arsenals in much the same way that rifles, machine guns, and artillery replaced bayonets, cavalry, and muzzleloaders a century ago. Moreover, these technologies are just starting to spread. If there is any lesson to be drawn, it is that the risk of miscalculation grows as the pace of changing military technology increases. 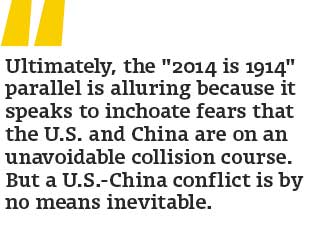 Moreover, these technologies are just starting to spread. Can recent experience in wars where only one side possesses advanced weapons (as was the case in Iraq and Afghanistan) really predict what war will look like when all sides have them?

Ultimately, the “2014 is 1914” parallel is alluring because it speaks to inchoate fears that the U.S. and China are on an unavoidable collision course. But a U.S.-China conflict is by no means inevitable, and even if it does eventually come to pass, it won’t be in a way that those currently invoking the analogy expect.

The centennial of the Great War is a fitting occasion to revisit the lessons learned in one of the deadliest conflicts in history. But it would be tragic indeed if, in seeking to learn from the mistakes of the past, we unnecessarily doom ourselves to repeating them.

Michael Hunzeker is a postdoctoral fellow at Princeton University and a major in the U.S. Marine Corps Reserve. His views do not necessarily reflect those of the U.S. government. Mark Christopher is senior director and head of the Asia practice at The Arkin Group and a fellow with the Truman National Security Project.

NEXT STORY: A Chance to Drive a Wedge Between Jihadists and Sunnis