Yemen peace talks in Sweden this week? Reps from the Houthi rebel group of central and northern Yemen are expected to fly to Sweden for talks with the UN and the Saudi-led coalition, Reuters reports this morning from the Yemeni capital of Sana’a. These could be the first negotiations between the Houthis and the Saudis since 2016, and they could happen as early as Wednesday, a UN source told Reuters.

U.N. special envoy Martin Griffiths is in Sana’a today, where he is expected to escort the Houthi delegation to northern Europe possibly this evening, possibly tomorrow morning.

Helping make this possible: The Saudis OK’d the flight of some 50 Houthi fighters from Sana’a to Oman for medical treatment.

What Griffiths wants: To “reach a deal on reopening Sanaa airport and securing a prisoner swap and a ceasefire in Hodeidah as a foundation for a wider truce,” which includes “a halt to coalition air strikes” and “Houthi missile attacks on Saudi cities.” More from Reuters, here.

Happening this week: U.S senators are expected to consider a resolution to end support for the Saudi-led coalition’s war in Yemen. That after a somewhat lackluster performance by Defense Secretary Jim Mattis and State Secretary Mike Pompeo to convince lawmakers America’s relationship with Riyadh required the U.S. continue to support the Saudi-led intervention in Yemen. Get caught up on how those conversations on Capitol Hill proceeded with a report from our own Katie Bo Williams.

With Stakes Mounting, World’s Governments Meet on Climate Change // Amy Myers Jaffe, Council on Foreign Relations: The Dec. 2-14 meeting in Poland is the most significant conference since Paris in 2015.

The US Military Is Genetically Engineering New Life Forms To Detect Enemy Subs // Patrick Tucker: The Pentagon is also looking at living camouflage, self-healing paint, and a variety of other applications of engineered organisms, but the basic science remains a challenge.

Nicaragua’s Deepening Crisis Will Send More Refugees Northward // Rocio Cara Labrador, Council on Foreign Relations: Political and economic unrest in Nicaragua could stoke the flames in a region where insecurity has forced tens of thousands to flee in recent years.

Ep. 30: Crisis in the Sea of Azov; Space Force!?; Nuclear anthropology and American folklore // Defense One Staff , Government Executive: Welcome to our podcast about the news, strategy, tech, and business trends defining the future of national security.

Decoding the Dance of Power: How Leaders Met MBS at the G20 // Krishnadev Calamur, The Atlantic: With the killing of Jamal Khashoggi hanging over the Argentina summit, how leaders interacted with the Saudi crown prince revealed their relative positions of power.

Marines Turn to Artificial Intelligence to Better Deploy Troops // Jack Corrigan, Nextgov: The tool could help top brass determine which battalions and gear are most prepared for battle.

The Trump Administration Wonders: Should We Seek a ‘Cold War’ With China? // Uri Friedman, The Atlantic: White House spars with a rising China, it can look to the United States’ postwar dealings with the Soviet Union for guidance.

Welcome to this Monday edition of The D Brief by Ben Watson and Bradley Peniston, and Katie Bo Williams. Thanks for reading! And if you find this stuff useful, consider sharing it with somebody you think might find it useful, too. On this day in 1979, Ayatollah Ruhollah Khomeini became Iran’s supreme leader.

What is the Senate Intelligence Committee watching most closely in its investigation into Russian election meddling? Ukraine, which holds its presidential election on March 31. “We’re very anxious to watch the Ukrainian elections to see what the Russians might do to see how their capabilities have changed,” chair Sen. Richard Burr, R-Va., said at a national security forum at the University of Texas-Austin on Friday. His Democratic counterpart, Sen. Mark Warner, D-Va., said he expected to see the Russian “marry” traditional cyber tactics—like phishing—with the use of misinformation, including the use of so-called “deep fakes” to ensnare Americans.
Burr also had a warning for those watching the committee’s work, which also includes probing any coordination between President Trump’s campaign and Moscow: Don’t confuse the Senate panel’s investigation with Special Counsel Robert Mueller’s investigation. “I don’t want you to get us mixed up with Special Counsel Bob Mueller’s investigation,” Burr said. “We have no criminal responsibility.” Burr said that the panel has issued more than one criminal referral to Mueller, but declined to give a specific number. The president’s former lawyer, Michael Cohen, recently pleaded guilty to lying to the panel in an indictment with its roots in a referral to Mueller from the panel. But Burr did offer one new tidbit about referrals the committee has made to Mueller’s team. “In a lot of cases,” he said, “those might be tied to lying to us.”

RIP George Herbert Walker Bush: WWII naval aviator, CIA director, 41st POTUS, arms-control pioneer (more on that later today), wager of the War on Drugs, and more.
Feds get Wednesday off. Trump has declared that the federal government should take a daylong break to mourn the late president.
The White House may also be looking for more time to avert a shutdown of DHS and the IRS, which run out of money on Dec. 7. Their budgets have been held up by Trump’s insistence that lawmakers include funding for a proposed wall along the Mexican border.

Condolences this week to the family of Vice Adm. Scott Stearney, who commanded the U.S. Navy’s Bahrain-based 5th Fleet. Stearney was was found deceased in his residence in Bahrain on Saturday, Chief of Naval Operations Adm. John Richardson announced the day of via a video message.
“No foul play” is suspected so far, Richardson said, but Bahrain’s Ministry of Interior is cooperating with U.S. Navy criminal investigators to get to the bottom of what happened on December 1.
Stearney was 58 when he passed away, The New York Times reports. And he took charge of the 5th Fleet in May — a command “that includes more than 20,000 United States and allied maritime forces.” Find his fully Navy biography, here.

How the media has helped us come to terms with the Pentagon’s $413 million audit. Shortly before Thanksgiving, the Defense Department’s Deputy Defense Secretary Patrick Shanahan briefed reporters on the department’s first-ever audit. No one expected a great result, and in that sense, no one was surprised by what Shanahan said. Still this is an organization that gets 54 cents of every federal dollar appropriated.
How The New York Times Editorial Board framed expectations: “The Pentagon is an enormous bureaucracy — three million people, 15,700 aircraft, 280 ships, 585,000 facilities at 4,700 sites worldwide, an annual budget of $700 plus billion — and some experts say that expecting a clean bill of health on the first audit was never realistic. Yet the Pentagon had nearly three decades to prepare for this accounting Judgment Day.”

Some of the findings included:

Some of the headlines about the audit:

FWIW: There has also been “a mind-boggling $21 trillion of Pentagon financial transactions between 1998 and 2015 could not be traced, documented, or explained,” according to The Nation’s Dave Lindorff, referring to a separate report from 2017 by Mark Skidmore, a professor of economics at Michigan State University.
NYTs recommendation: “The nation needs to be more honest about the choices it is making (investing trillions more dollars in the nuclear arsenal is especially foolhardy) and realize that other investments — in diplomacy and development overseas, in job training and infrastructure projects at home — are also crucial to national security.”
Hear more from Lindorff of The Nation, speaking for about 15 minutes to WNYC’s The Takeaway in conversation, here.
Or read CSIS Mark Cancian’s take over at Forbes, here.

Phrases to possibly avoid while talking about China: “Big leap forward,” as the president did this morning in a tweet about agriculture policy and the Middle Kingdom’s plan for the future. The Washington Post explains why there might be some delicacy with that particular phrase, here.

Now Trump wants to avoid an arms race. At 8:30 a.m. on Monday, the president tweeted, “I am certain that, at some time in the future, President Xi and I, together with President Putin of Russia, will start talking about a meaningful halt to what has become a major and uncontrollable Arms Race. The U.S. spent 716 Billion Dollars this year. Crazy!”
First off, the commander in chief exaggerated actual 2018 defense spending, which included $617 billion in the base budget, $69 billion for overseas wars, and $22 billion in Energy Department nuclear work (h/t VOA’s Steve Herman).
Second, Trump ran on and pushed for large increases in defense spending.
Third, he was pushing for a nuclear arms race as recently as October. CNN, Oct. 24: “President Donald Trump told reporters Monday that the United States would increase its nuclear arsenal until other nations ‘come to their senses,’ threatening an arms race days after he said he would withdraw the US from a Cold War nuclear treaty.”

This week in cheeky hacker news, one used a fraudulent debit card to buy a few drones that would drop him some drugs inside the… wait for it… prison where the hacker was an inmate, The Daily Beast reported from developments at the Federal Correctional Center in Oakdale, Louisiana, beginning in 2015.
How the scheme was busted: a snitch (in part).
But the story is pretty incredible, especially this bigger picture take from DB: “The Bureau of Prisons acknowledged in a statement to the Daily Beast that drone drops are an issue at its prisons, but declined to quantify the problem ‘for security reasons.’” Read it all here.

Reminder: There are quite a few ways to stop off-the-shelf drones — but you’ll need to combine a few methods to have the greatest success. See our explainer from September, here.

Finally today: A North Korean soldier defected to the South this weekend, South Korea’s Joint Chiefs of Staff announced Friday. “The defection took place after the two Koreas removed guard posts along the border in an effort to build trust on the divided peninsula,” Reuters reported. Tiny bit more, here.
Remember when: AP reminds us that almost exactly 12 months ago, “a North Korean soldier was critically wounded in a jointly controlled area after he fled to the South amid a hail of bullets fired by his former comrades.”
Meantime in North-South relations, “South Korea’s Defence Ministry said Friday that the Korean militaries completed removing 20 front-line guard posts and landmines from a border area where they plan to start their first-ever joint search for remains of soldiers killed during the Korean War.” Read on, here. 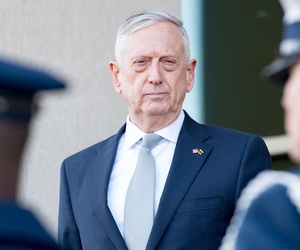 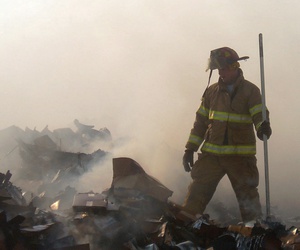 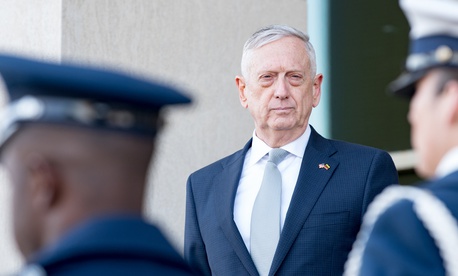 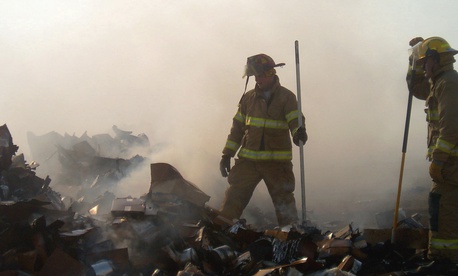